Abstract: The aim of this study is to establish the wind power potential for the wind energy resource in Enugu, south east Nigeria. For this purpose, monthly wind speed data were obtained at 10m height from Nigeria Meteorological station NIMET, Abuja for the period (1990 – 2006). The monthly average values of wind speed, standard deviation, Weibull parameters and wind power were determined. The Weibull and Rayleigh probability density function and the cumulative distribution function respectively were also evaluated. The results show that this region, according to wind power classification is in wind power class II because values of wind power density is greater than 100W/m2. From the results obtained electricity generation from wind power is quite promising for the installation of wind turbines.

Renewable energy sources such as solar thermal, geothermal, biomass, tide and wind power are receiving as effective ways to mitigate energy shortage and reduce environmental pollutions. Wind energy is the fastest developing technologies across the globe due to the advantages of rich resources, wide distribution and environmental friendly [5].

The rapid growth of wind energy industry led to the production increase and the cost reduction challenges. There are various ways to increase the production and reduce the cost, such as the site selection and site layout design [2].

For effective evaluation of wind power available in a particular site, studying the wind statistical characteristics is needed based on this reason, a large number of studies have been published amongst which are: Ahmed et al [1] presented work on wind energy potential evaluation in northern and southern regions of Nigeria on the basis of the Weibull and Rayleigh models. The work studies 17years measured monthly wind speed and from his results northern region was found to have the highest wind potential as compared to the southern region. Akpinar [2] presented a work on statistical analysis of wind energy potential on the basis of the Weibull and Rayleigh distribution for Agin-Elazig, Turkey. The work studies 5 years measured wind speed data based on the Weibull and Rayleigh models. The Weibull distribution provides better power density estimation in all twelve months than the Rayleigh models. Emami [7] worked on the statistical evaluation of wind speed and power density in the Firouzkouh region in Iran. The work studies an hourly average wind data which was observed for one year (2003) at Firouzkouh meteorological station, from his result he found that the region is quite favourable for wind power generation.

The main objective of this present study is to determine the wind energy potential using the Weibull and Rayleigh distribution functions in south east Nigeria, Enugu.

In the present study, monthly wind speed data for Enugu South East Nigeria covering the period (1990-2006) have been analyzed. The wind speed data were recorded continuously at a height of 10m using a cup generator anemometer and was obtained from Nigeria Metrological Agency (NIMET), Abuja.

Enugu is the largest city located in heart of South Eastern part of Nigeria having latitude 6°26'25N and longitude 7°29'39E. It is characterized by a tropical rain forest with humid climate, mean density temperature of 26.7° and an estimated population of 3.8 million in 2012 with an elevation of 247metres and coal is one of the major natural resource found in the state.

Figure 1 shows wind map for the chosen region. Enugu, it can be observed from the figure that various locations are identified with different colours, this shows that each locations as shown has a range of wind speed speed. This will enable easier investigation of that particular location, having evaluated the site, the researcher can know the type of application to adopt in such locations. 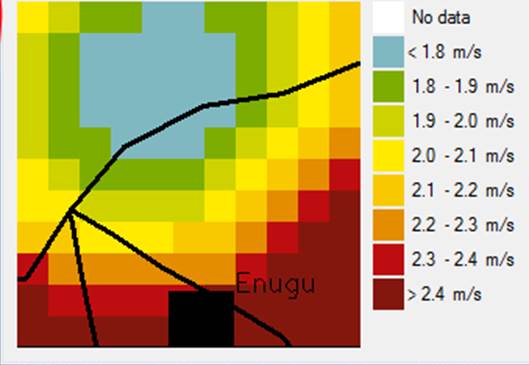 The continuously recorded wind speed values and the standard deviations can be calculated from the available monthly wind speed data using equations (1) and (2) shown below [3];

Where vm (m/s) is wind mean speed, Nis the number of months in the period considered, and

(m/s) is the standard deviation.

The Weibull distribution method is widely accepted for evaluating local wind load and probabilities and is considered as a standard approach. This method has great flexibility and simplicity. However, the main limitation of the Weibull density function is its inability to accurate calculates the probabilities of observing zero or very low wind velocities [10]. Weibull parameter distribution function does not address the differences of wind velocity variation during the course of the day. Nevertheless, this statistical method is found to fit a wide collection of recorded wind data. The Weibull distribution is often used in the field of life data analysis due to its flexibility [11]; it can mimic the behavior of the other statistical distributions such as the normal and exponential. The probability density function and cumulative function of the Weibull distribution are evaluated using equation (3) and (4) which is given by [3];

The Weibull parameters (scale and shape factors) can be calculated analytically from the available wind speed data using the relations below (5) given by; [4];

Table 1. Arrangement of the measured monthly series data in frequency distribution for Enugu in month of January.

The power of wind can be estimated by using the equation (9) below, given by [1];

is the average density of the air in kg/m3.

Wind power density of a site based on the Weibull and Rayleigh models can be expressed using equation (10) and (11) respectively [7];

Where PW is Weibull power, PR is Rayleigh power, and

is the gamma function.

The errors in calculating the power densities using the models in comparison to those using the measured probability density distribution and the yearly average error can be obtain using equation 12 and 13 respectively, [3];

Table 2 presents the basic information of the wind energy resources for Enugu south east Nigeria which are; monthly average values for the wind speeds, standard deviation and the Weibull parameters. From the table, the values of (c and k) vary from 4.57 - 6.88m/s and 2.43 - 16.59 respectively. The values of mean wind speed vary from 4.42 – 6.47m/s while for standard deviation values vary from 0.35 – 2.63m/s.

It can be seen from figure 3 that the mean reference power values are lower as compared to Weibull and Rayleigh power. The Rayleigh model returns higher values in wind power density than the Weibull model in all the months. From the graph the highest power occurred in the month of April for Raleigh model with value of 316.78W/m2. 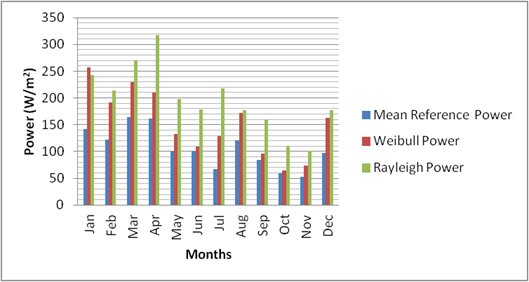 Table 3 presents the monthly percentage error for both Weibull and Rayleigh models, it can be clearly observed that Rayleigh model returns highest percentage in almost all the months except in the month of January were Weibull model have a higher percentage with value 81.3% as compared to Rayleigh model with a corresponding value of 71.8%.

(1)  In Enugu south east Nigeria, the highest average monthly wind speed was determined to be 6.47m/s in month of April while lowest wind speed occurred in month of November with value of 4.42m/s.

(3)  The location is suitable for electricity generation since the annual average power density for both Weibull and Rayleigh were obtained to be 152.35W/m2 and 197.02 W/m2 respectively, this indicates that Enugu correspond to wind power class II, since the average wind power density value is greater than 100W/m2. In this location wind energy conversion system (WECS) can be installed to supply a reasonable amount of energy using a number of wind turbines.

(5)  In calculating the error in power estimation for both models, the Weibull model returns smaller errors in power density estimation than the Rayleigh model.

Finally, Enugu south east Nigeria have wind energy potential that is quite promising for installation of wind turbines.