If A and B are presumed to be a pair of complementary variables, such as position and momentum, and if

are the uncertainties associated with this pair, then Heisenberg's uncertainty principle states [1]

Let us consider a particle of finite extent in a 1-dimensional space as illustrated in Fig. 1; the red bar represents the particle of width

Fig. 1. Particle in a 1 dimensional space.

In Fig. 1, we can easily plot coordinates in terms of a 1-dimension line. However, we know that matter/particles are always in state of vibrations [2], hence Fig. 1 is not appropriate because it presupposes a representation in a flat 1-dimensional space. Consider then the same particle in a particular state of vibration as depicted in Fig. 2.

As already mentioned, the particle is in a 1-dimensional space, but plotting coordinates only in terms of one parameter in curved space is not possible. To resolve this problem we can consider the curved path is in an complex plane. This complex plane gives us information of the coordinate in a curved space with the real line giving the coordinate in a normal 1-dimensional space. Hence, the position of a particle in vibration can be expressed in the form of a 1-dimensional; complex vector space ℂ1 = ℂ (this can be viewed as a ℝ2 with the Cartesian unit j generating an imaginary line), which can be called an imaginary line [3].

3. Derivation Elaborating the Origin of Lower Limit in Uncertainty Principle

For this construction, we shall consider the uncertainty principle for the pair of position and momentum observable, If x (position) and p (momentum) are supposed to be a pair of complementary variables and if

are uncertainties associated with this pair, then Heisenberg's uncertainty principle states [4]

For a particle at rest, a frequency (f) is associated that depends on mass (m):[5]

This implies that even at rest the particle is in a state of change. If we apply this change in Fig. 2, one can say that the particle in 1 dimension would act like a vibrating string. Let us denote the length in the real line as

, the length in the imaginary line as

, and the total length as

will always be constant but

will change with time. The total length

given in polar coordinates [6]:

| and an angular frequency as

in the complex plane, we trace a circle of radius

The radius of the circle

times the radius is equal to the circumference of the circle) 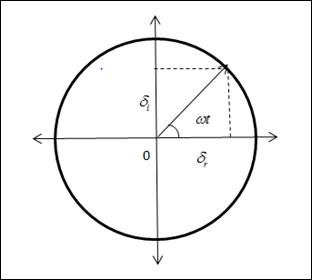 in the complex plane.

If we try to measure a particle’s position which is at rest and located at the origin (see Fig. 4) we will not obtain 0, as

is non-zero, but rather it will be equal to one-half of 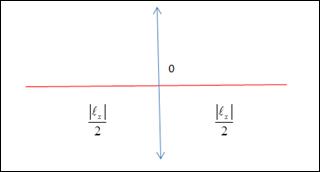 Fig. 4. Particle at rest situated at the origin.

4. Proof that Single-Slit Diffraction Is Due to the Complex Vector Space

Diffraction by a single slit is usually explained with the help of Heisenberg's Uncertainty Principle [10]. However, with the introduction of the complex vector space, it is paramount that an account of diffraction be also given. If classical physics is assumed where Heisenberg's Uncertainty Principle does not apply, the output from the slit would be a single peak in intensity, as depicted in Fig. 5. Nevertheless, the real output is an interference pattern illustrated in Fig. 6 [11] 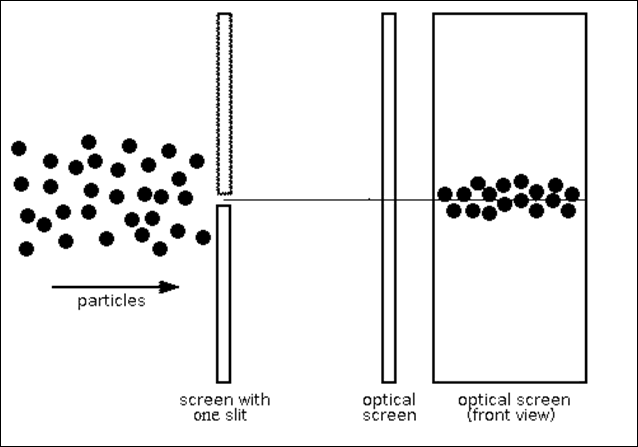 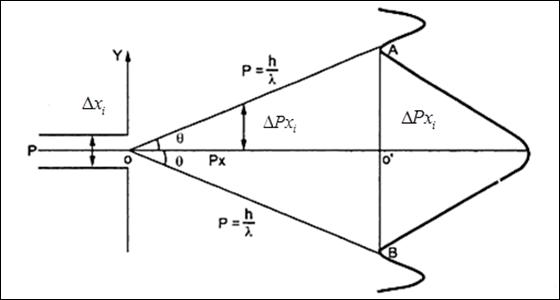 In Fig. 6, we denote the uncertainty in momentum in the y direction as

and the shift in position as

, but note that we are considering these variables in a complex vector space. The product of

for a single slit experiment is given as [12]

In this experiment only the imaginary component of the complex vector is considered, which is why from Eq. (6) we can say that the uncertainty in position along the imaginary line is given by

In Eq. (11) the whole circumference was taken into account; here we need only consider the imaginary line, so

can be expressed as

As Eqs (19) and (16) are equal, this opens the possibility that the diffraction produced by a single slit is due to the vibration of the particle in a complex vector space.

5. Derivation of the Intensity of a Single-Slit Diffraction with the Help of a Complex Vector Space

Suppose electrons are fired at a slit of finite width a, as depicted in Fig. 7. 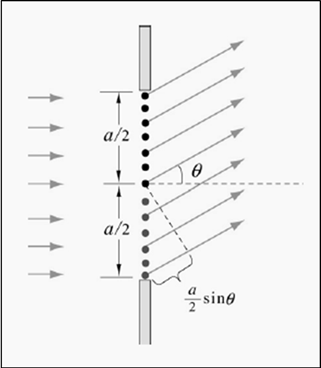 Fig. 7. Diffraction of an electron by slit of width a.

Let us divide the slit into N equal parts of length

. Any two adjacent zones have a relative path length

is given by the ratio

Suppose a matter wave originating from point 1 in the slit arrives at a point P on a screen as depicted in Fig 8. The wave can be expressed as 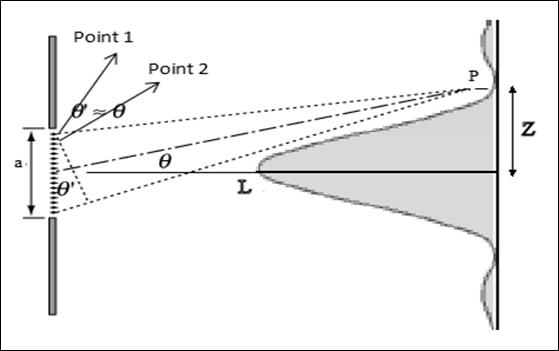 Fig. 8. Diffraction of an electron by a single slit of width a from two adjacent points.

A wave from point 2 in the slit (Fig. 8) will have a phase shift of

at point P with respect to point 1, and hence has the wave form

A wave from point N can be expressed as

At point P on the screen, all these waves are superimposed giving

From Appendix A, we know that

Substituting the value of

; this proves that the intensity difference on the screen arising in single-slit diffraction is due to the vibration of the particle in complex vector space.

only accounts for the real component of the energy. We begin by imagining a stationary box in a space; a photon is emitted from one side of the box and absorbed on the other. If the photon’s energy is denoted by E and the speed of light by c, then from the Maxwell expression we can write [16]

Again this term only accounts for the real component of photon’s momentum and we know that momentum must be expressed as a complex number. If we perform single-slit diffraction with photons, we obtain a similar pattern as for electrons, or indeed any particle. As photon has no mass and always moves at the speed of light, we can say that both real and imaginary components of photon must be equal. This is why the modified expression of Eq. (46) should be

When the photon initially leaves the box from one side, the box will recoil with speed v and from conversation of momentum, the box should gain the same amount of momentum as the photon. The momentum gained by the box (of mass M) in complex vector space will be

A photon will take a finite time

to reach the other side of the box; by that time the box would have moved a distance

, hence the velocity of the box can be written as

By conservation of momentum,

are equal and hence we can say that

If the box is of length L, then the time taken by the photon to reach the other side is

and the box has position

. Then the centre of mass is given by the following expression [17]

Similarly, the centre of mass when the photon reaches the other side of the box can be expressed as

At the start of the experiment, the photon is at position

which substituted into Eq. (38) yields

We can write the expression for the photon’s energy by rewriting Eq. (32) as

, we can substitute this expression into the imaginary term of Eq. (46) to obtain

The above Eqs. (45) and (47) infers that matter/photon is both a wave and a particle simultaneously, which was recently proved experimentally [19].

Ψ is always connected to factor exp(iα), which disappears when one construct the real probability quantities and consequently is of no importance, which is used to normalize and expressed in terms of probability [20]. Wave functions like electromagnetic wave depends on function of E and H, but Ψ units keeps on changing as per dimensions of space one chose [21]. Ψ is function of one of the complimentary pair being measured, as of now we consider these physical quantities in real terms and hence it leads to uncertainty which in terns relates Ψ with probability. Complementary variable too have complex factors (like momentum, position, energy and time) and hence Ψ too is complex unlike other wave equations like electromagnetic waves and vibrating string. As Ψ depends on physical quantity it units keeps on changing. Probabilistic interpretation of wave function actually gives us information of underlying physical quantity in complex plane.

Heisenberg uncertainty principle is boundary condition where complementary variables like (position and time, energy and time) sets limitation on accuracy to find both the variable simultaneously, but as you accurately measure one of the variable you get imaginary plane information of another variable with real plane information, this is not uncertainty but information about another variable in both real plane and complex plane. Thus to define state of any particle or photon position, momentum ,energy , time and other complementary pair should be considered as complex variable rather than real variable to define sate of any particle or photon.

Appendix A: Derivation of the Intensity for Single-Slit Diffraction for Electrons

From basic trigonometry, we know that [13]

We can cast Eq. (48) in terms of waves from the successive points on the slit:

For point N, we have

The terms on the left hand side combine to yield

Squaring both the sides,

and then taking the time average for both sides

where the time average of

In taking the limit

Multiplying and dividing the denominator by