Characterization of Neutron Field in a Spherical Irradiation Facility

Abstract: A small-sized dual-hemisphere irradiation facility designed and constructed for using Am-Be isotopic neutron source to study and characterize the neutron field around sample irradiation position for obtaining maximum thermal neutron flux. The foil activation method based on 115In and 197Au was used for monitoring the thermal neutron flux. For field characterization, several combinations of moderation media have been tested (air, sand and water) aiming at the identification of the best combinational setups for sample irradiations using thermal neutrons. To account for epithermal contribution, reaction rates and flux calculations were corrected using tabulated values of Westcott g-factors and resonance integrals for these media. The optimal position for sample irradiation using thermal neutron for both water-water and water-sand setups, inside the irradiation channel, was found at about 6.9 to 10.9 cm from the center of the neutron source.

The neutron activation analysis (NAA) method is considered one of the most famous methods to investigate elements in a variety of sample matrices. In the NAA the sample to be analyzed is exposed to a thermal neutron ﬂux; then, the induced activity of the sample is measured using absolute or comparative method. For this purpose a previously described small-sized neutron irradiator prototype based on a 5 Ci (1.85×1011Bq) Am-Be isotopic neutron source was prepared [1]. The use of the neutron irradiator presents the advantage of supplying a stable neutron ﬂux over a long period [2-4], thus eliminating the need for using expensive neutron producing devices such as reactors or accelerators. This way makes the analyzing process became agile, practical and economic. This work presents the optimization of the neutron irradiator for thermal and epithermal neutron production using several combinations of moderating media.

In this work, the neutron irradiation facility designed and constructed previously in the shape of a spherical container was used [1]. The design aimed to achieve symmetry with respect to the position of the neutron source used at the center of the sphere. The facility was designed for the accommodation and safe-handling of the 5 Ci Am-Be isotopic neutron source. The neutron irradiator consists of a sphere of 60 cm in diameter made of a galvanized steel sheet and divided to two hemispheres. The lower hemisphere is an open to be used as container to be filled with different media. The upper hemisphere has a sealed bottom with embedded-in horizontal tube used to place the neutron source at the center of the sphere. Moreover, within the upper hemisphere a vertical cylindrical tube of 3.2 cm diameter was welded at the top of it and at the mid place of the source containing horizontal tube. The vertical tube is a devoted space for sample’s irradiation, and contains equally spaced holes of appropriate diameter to allow water or air to achieve homogeneous medium in the upper hemisphere.

The spectrometer used in this experiment was a HPGe coaxial detector of 70 % relative efficiency and 2.5 keV energy resolution at the 1332.5 keV g-ray of 60Co, coupled to associated electronics. The detected pulses were analyzed by an 8 k computerized multichannel analyzer. The Canberra’s software package Genie-2000 was used for recording the spectra and extraction of the necessary data from the spectra. Oak Ridge standard gamma point sources of 22Na, 57Co, 60Co, 133Ba, 137Cs and 152Eu were used for both the energy and efficiency calibrations of the system. The standard sources were positioned along the detector axis at distance 0, and 5 cm above the cap. To reduce the background effect, a cylindrical 5 cm thick lead-shield containing an inner concentric thin Cu cylinder was used.  Full-energy peak area was obtained and the absolute peak efficiency calculated using the following equation:

is the full-energy peak efficiency, N is the corrected net peak area in counts/sec., Ao is the initial activity of standard source in Bq,  Iγ is the absolute gamma-ray intensity, λ is the decay constant, and  t  is the elapsed time since standardization. A typical plot for the log-log absolute efficiency as function of the gamma-ray energy is shown in Figure. 2 for the energy range of interest in our measurements. A second-order polynomial function was used to fit the plot. 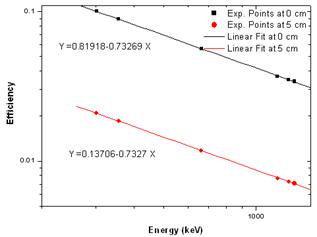 In order to monitoring the thermal neutron flux by foil activation method, 115In and 197Au were irradiated. Five sample foils are fixed in a Plexiglas holder at distances 2.9, 6.9, 10.9, 14.9 and 18.9 cm far from the center of the neutron source in the samples channel A. The irradiation time (tir) was 68 hours in case of Au foils and 3 hours in case of In foils. When the foils are removed from the neutron field,  a suitable cooling times (tc) were employed, taking into consideration the half-lives of the elements of interest, after which the samples were counted using the HPGe spectrometer. The characteristic gamma-rays emitted from the activated foils were counted for a certain period of time (tm=15 min.). After counts have been logged, the data can be used to monitoring and calculate the flux at the foil during the experiment. Table I gives the physical parameters of the used foils. Table II shows the activation cross-section for the (n, γ) reaction of 115In and 197Au that yield radioactive products with convenient half-lives [6].

Table I. Physical parameters of samples used in the current experiments.

Table II. The activation properties of the used foils.

To calculate the thermal flux, two activity measurements were performed using bare and cadmium covered samples. The thickness of the cadmium cover was 480.0±0.5 μm, which has a high neutron absorption cross section for neutron energies below 0.4 eV. Among the obtained gamma spectra of the decay products the most intense gamma lines were chosen as shown in Table III [7].

The reaction rates (RR) were calculated for both Au and In samples using the well known formula as follows [6]:

where M is the atomic weight of the sample,

is the decay constant,  C is the net counts, m is the sample weight, NA is the  Avogadro’s number,

is the detection efficiency,

is the gamma ray decay probability,

is the isotopic abundance, ti,c,m  is  the irradiation, cooling and measuring time, respectively and

is the detector solid angle given by:

Where, ΩFd =  1/2  is the foil detector solid angle and ΩFS is the foil source solid angle, calculated as,  ΩFS= area of the foil/(4π× (distance between foil and neutron source)2).

Equation (2) was used for both bare and cadmium (Cd) covered foils measurements.

The thermal RRth  was calculated as the difference between

The thermal and epithermal flux values were calculated using the following equations [6]:

is the effective cross-section expressed as:

is the 2200 m sec-1cross-section, g and s are functions of the temperature T and are measures of the departure of the cross-section law from the 1/v form in the thermal and epithermal regions, respectively, g is the Westcott g-factor, which equals 1.000 for Au and 1.022 for In foils [8], r is the epithermal index that varies from 0.011 to 0.047 depending on the irradiation facility used. For our facility r = 0.02 calculating according to the procedure described in reference [9]. Furthermore, s is defined as:

On the other hand, the epithermal flux is given as:

where the resonance integral

is the cadmium ratio calculated according to equation:

Finally, the thermal flux was obtained as:

The calculated value of reaction rate for thermal neutrons in the case of Au and In samples for the best configurationally setup (water-water) is shown in  Table IV.

Table IV. The calculated thermal neutron reaction  rate for both In and Au foils in case of water-water setup. The distance is center-to-center.

The thermal and epithermal fluxes were measured for different combinational setups to determine the best position for maximum thermal neutron flux for each setup[1,11]. The epithermal and thermal fluxes are calculated according to equations (7) and (9) for both In and Au samples, respectively.

In this geometry we studied the effect of introducing hydrogenous material around the sample irradiation position. Water is known by its good thermalization properties, where the neutron diffusion length in water is 2.7 cm which means that even at such small distance, good efficient thermalization can be obtained. This reflects itself clearly in Figure 3 where the standard buildup/decay curve is observed.

In this setup we studied the effect of introducing dense media (sand) in the lower hemisphere on the neutron field around the irradiation position being in water. As is seen in Figure 4 noticeable increase in the neutron flux is observed. This may be attributed to the effect of the neutron reflection from the dense surface in the lower hemisphere. The results  show a characteristic neutron yield  buildup and decay with positions of maximum values ranging from 6.9 to 10.9 cm center-to-center distance.

In this setup homogenous hydrogenous material (water) surrounds both the source and irradiation position. This setup is considered the most appropriate for obtaining efficient neutron thermalization. It is characterized by high thermal neutron flux and hence high induced activation in the samples. The obtained neutron yield dependences are presented in Figure 5. They show characteristic neutron yield buildup and decay with positions of maximum values ranging from 6.9 to 10.9 cm center-to-center distance. The decrease of the neutron yield following the maximum value indicates that at this source-sample distance the condition for thermal equilibrium was reached. The geometry setup is advantageous for measurements with thermal neutrons (analysis, cross-section).

In the previous setups, the data show that the maximum value for thermal neutron yield is obtained at the position 10.9 cm.

Fig. 3. Total, epithermal and thermal neutron yield variation for Au and In samples versus distance from the center of the neutron source in water-air setup . Φ is corrected for a neutron build-up factor of 5.

Fig. 4. Total, epithermal and thermal neutron yield variation for Au and In samples versus distance from the center of the neutron source in water-sand setup . Φ is corrected for a neutron build-up factor of 5.

Fig. 5. Total, epithermal and thermal neutron yield  variation for Au and In samples versus distance from the center of the neutron source in water-water setup .Φ is corrected for a neutron build-up factor of 5.

In this study a small-sized spherical irradiator consisting of two hemispheres has been designed and constructed for the aim of optimizing neutron field for neutron activation using thermal neutrons from an isotopic Am-Be neutron source. Additionally, for the safe source storage and handling, a neutron house is provided for the constructed irradiator prototype [1,11]. TT The neutron field characterization inside the irradiator was performed using the foil activation technique with both Indium and Gold foils.

Three combinational setups have been presented, namely: water-air, water-sand and water-water setup for study the thermal neutron irradiations. To account for epithermal contribution, reaction rates and flux calculations were corrected using both Westcott g-factors and resonance integrals for these setups.

It was found that the water-water and water-sand setups are the most suitable setups for subcadmium (thermal neutron yield) irradiation at distance varying from 6.9 to 10.9 cm where the thermal neutron yield is the maximum. For these setups at a distance 10.9 cm both activation foils (In and Au) give an average value of  (1.66±0.05)´107 n/sec in case of water-sand setup and (1.85±0.65)´107 n/sec in case of water-water setup.

The technician teams of the Nuclear Reactions Unit at Inshas are particularly acknowledged.