Abstract: Performance of organic solar cell (OSC) using the modification of cathode has been investigated in this research. OSC has been fabricated using the blend of P3HT (poly (3-hexylthiophene)) and PCBM (Phenyl C61 butyric acid methylester) at 1:1 ratio. E-beam evaporated indium tin oxide (ITO) has been used as the anode. A novel bi-layer of e-beam-evaporated LaF3 and Al (LaF3/Al) has been used as the cathode. The morphology of the ITO, P3HT: PCBM and LaF3 layer has been investigated by Atomic Force Microscope (AFM). LaF3 layer between P3HT: PCBM and Al layer was found to influence the reverse current, open-circuit voltage and efficiency of OSC. Various thicknesses of LaF3 layer have been investigated, and 3nm thick LaF3 layer was found to be the optimum thickness for the enhancement of the various solar-cell parameters of our fabricated OSC. The effect of annealing on the performance of the cell has been also investigated. The post-fabrication annealed devices, with or without the LaF3 layer, exhibited higher values of short-circuit current, open-circuit voltage than those of similar devices annealed before depositing the Al metal. It was found that annealing at 150°C for 20 minutes provided the best result. The overall power conversion efficiency was found to enhance several times than that of the conventional structure of OSC having only Al as the cathode. Altogether the experimental results show that bi-layer of LaF3/Al cathode could enhance the overall performance of OSC.

Organic Solar Cells (OSCs) has attracted much interest of the researchers because of their high throughput, low-cost solution phase processing [1-5]. But, before OSCs can be commercialized practical limitations of OSCs such as low power conversion efficiency (PCE) that results from the low open-circuit voltage (VOC), short-circuit current (JSC) and fill factor (FF) and limited operational lifetime must be overcome. The cathode of OSCs plays a crucial role of collecting electron. The efficiency of solar cell is a big factor. Historically, conventional solar cells were built from inorganic materials such as silicon. Although the efficiency of such conventional solar cells is high, very expensive materials and energy intensive processing techniques are required. New ways of manufacturing solar cells that can scale up to large volumes and low cost are required. A broad range of solar cell technologies are currently being developed including organic solar cell, dye-sensitized nanocrystalline photo electrochemical solar cells, polymer/fullerene bulk heterojunctions, small molecule thin films and organic–inorganic hybrid devices.

Optical properties of LaF3 structures attract a lot of interest currently due to their application perspectives of Lanthanum Fluoride (LaF3) is a highly refractive layer material and high transparency. LaF3 is also used as the diffusion barrier for Al into the photoactive polymer. In this background e-beam evaporate a very thin layer of LaF3 as a buffer layer to enhance the performance of the cell has been investigated. By varying the thickness of LaF3 the band gap can be tuned therefore the absorption range can be tailored. We observed that absorption decreased with the increased of LaF3 film thickness. The optimum layer thickness of LaF3 may be up to 3 nm.

LaF3/Al cathode has been increased cell performance compare to the normal structure. LaF3/Al cathode annealed at 150°C for 20 minutes and showed better result than without annealing samples. 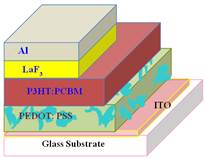 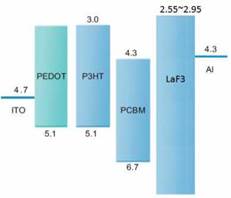 The expected energy diagram is shown in Figure 2. Previously reported values were used for the energy levels of the Figure by adjusting to the present work. The energy diagram has been shown in flat-band conditions, i.e., without any band bending due to transfer of charge carriers between materials upon contact. As can be seen from Figure 2, energy barrier exist near the semiconductor-metal interface. Electrons are transported to Al, and holes are transported to an ITO- coated substrate. Due to increased electrical field the electrons can tunnel through very thin LaF3 layer efficiently. Again, LaF3 film is an electrical insulator and due to its exceptionally large surface polarization thin LaF3 layer is expected to decrease the surface potential of the Al cathode and thus the effective work function, resulting in favorable electron extraction. These are all in good consistence with the obtained enhancement in JSC and VOC. LaF3 layer can be also expected to block holes because of its ionization potential of 12.4eV, which is much larger than that of PCBM (6.3eV). LaF3 has a high electron affinity that is also expected to enhance electron extraction from PCBM and blocks holes as a result probability of radiative recombination is greatly improved. Moreover, recombination at the metal/polymer interface can be avoided as the LaF3 layer separates the recombination zone from the metal electrode. Due to the formation of an interface dipole at the surface of metal electrode generated by the thin layer of LaF3 and pointing toward the Al surface, the work function of metal electrode would be lowered. 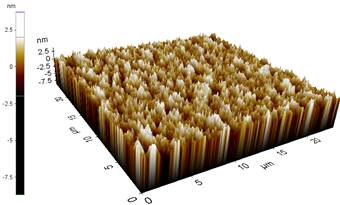 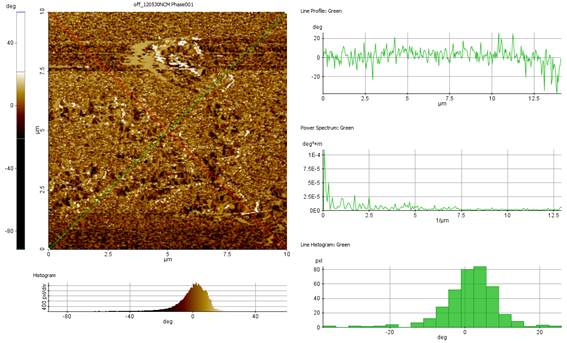 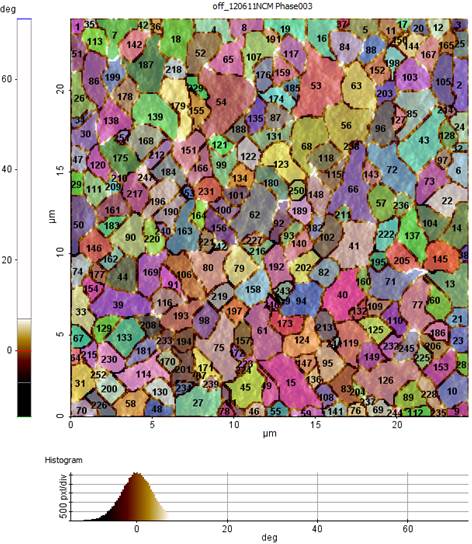 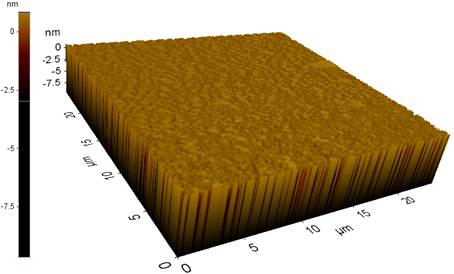 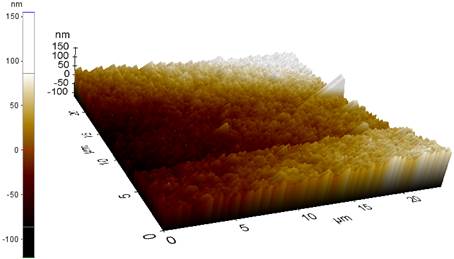 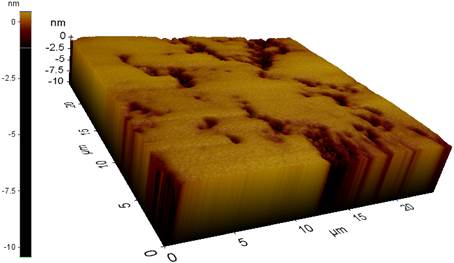 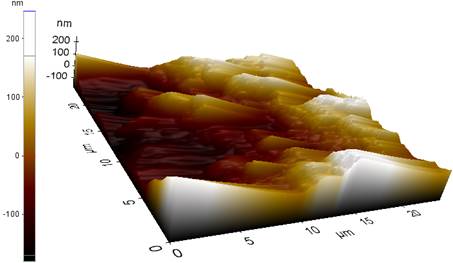 Figure 5. Surface morphology of photoactive layer (a) amplitude (b) topography. 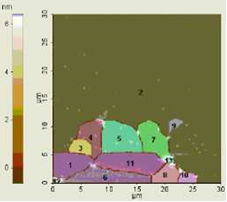 The average roughness of LaF3 layer has been found to be 0.0147 nm. As can be seen from the figure 6 an amorphous LaF3 was obtained by e-beam deposition. The LaF3 layer was found to be like a single grain (grain#2) having no grain boundary features. The roughness and grain-boundary less layer will certainly provide a very good electrical interface. 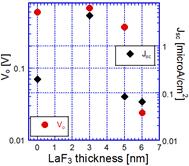 Figure 8. Voc and Jsc as a function of LaF3 thickness. 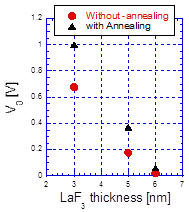 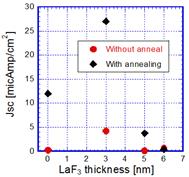 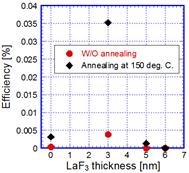 Figure 11. Effect of annealing on efficiency.

The J-V characteristics of the designed organic solar cells were studied under forward and reverse bias conditions in the dark and under 1.5 AM light. J-V characteristics were measured by KEITHLEY 2400 source meter. From figure 7 we see that reverse current density decreases with the increased thickness of LaF3. The maximum was for 2 nm and the minimum was for 6 nm. The open circuit voltage for 2 nm LaF3/Al cathode was very poor. An open circuit voltage of 0.68 V and a short circuit current density of 4.3 μA/cm2 were found for 3 nm LaF3/Al bi-layer cathode. As the I-V characteristics showed, the poor performance (reverse photocurrent) was due to the high series resistance of OSC, that might be due to our electrical connection from electrodes (ITO and Al) using silver paste. The effect of annealing on the performance of the cell has been also investigated. The post-fabrication annealed devices, with or without the LaF3 layer, exhibited higher values of short-circuit current, open-circuit voltage and efficiency than those of similar devices annealed before depositing the Al metal. It was found that annealing at 150°C for 20 minutes provided the best result. The efficiency of OSC are shown as a function of LaF3 thickness in Figure 11. The overall power conversion efficiency was found to enhance several order than that of the conventional structure of OSC having only Al as the cathode.

LaF3/Al bi-layer cathode has been fabricated and tested for P3HT: PCBM-based organic solar cells. The influence of LaF3 thickness on solar cell performance was studied. This research investigated a novel approach of inserting very thin buffer layer of LaF3 between the Al cathode and photoactive polymer to enhance the performance of conventional organic solar cell (OSC). The experimental results without any doubt indicated substantial increase in the short-circuit current density and open circuit voltage of the conventional OSC. The effect of annealing on the performance of the cell has been also investigated. The post-fabrication annealed devices, with or without the LaF3 layer, exhibited higher values of short-circuit current, open-circuit voltage than those of similar devices annealed before depositing the Al metal. It was found that annealing at 150°C for 20 minutes provided the best result. The overall power conversion efficiency was found to enhance several order than that of the conventional structure of OSC having only Al as the cathode. Although the conversion efficiency was very poor probably due to very high series resistance of the whole structure, it can be concluded that the approach of inserting a buffer layer of LaF3 would enhance the performance of conventional organic solar cell. The experimental results indicate that LaF3/Al bi-layer cathode can be used to enhance the performance of organic solar cells.