A Theory on the Birth, Structure and Ultimate Fate of the Universe

Abstract: One major theory stipulates that our Universe was born through a process of fluctuation in a quantum world, the Big Bang and inflation, and is still expanding. However, questions concerning dark energy, dark matter and other major issue remain unanswered. If it is assumed that the quantum world remains outside of the Universe in the same state as before the birth of the Universe, and that the Universe is a space-time bubble created therein with a boundary that is an event horizon similar to a black hole, then it can be proven that the Universe is not expanding but contracting from its boundary, while satisfactorily explaining the observed results of the Universe’s expansion and isotropy. The authors propose this as a new theory.

2.1. The Birth and Structure of the Universe

If our Universe is the result of the Big Bang, let us assume that before our Universe a quantum world with no time or distance existed, and let us call such a world a "quandom." There is no space or time in a quandom, where matter and energy are condensed into a single point in a quantum state with no position or length. A quantum fluctuation there could result in the Big Bang and the subsequent inflation. This is as if a phase transition occurred in boiling water at a temperature higher than water’s boiling point, resulting in a big steam bubble in the water. Similarly, if our Universe is regarded as a space-time bubble created as a result of a phase transition in a quandom, it can be considered that the outside of the Universe is a quandom, and that the edge of the Universe is a boundary between the Universe and the quandom containing it, similar to a boundary between water and a bubble. Hereinafter, let us call this boundary between the Universe and the quandom containing it "outer space-time wall".

2.2. The Expansion and Isotropy of the Universe 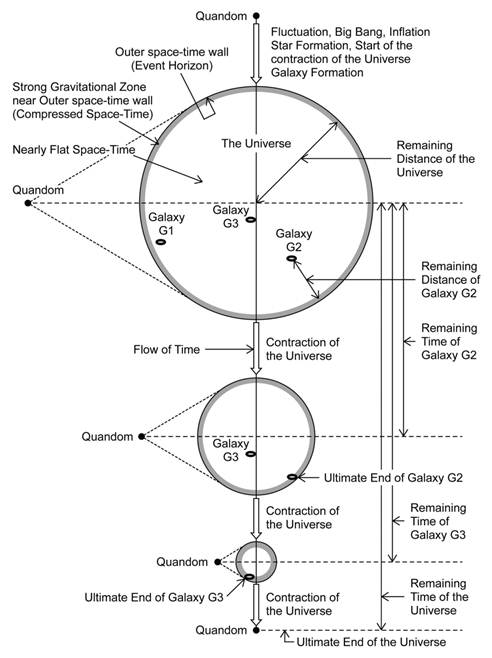 Figure 1. The Universe’s structure: This figure depicts the Universe’s life starting from its birth at the top to its ultimate end at the bottom, using a cross-section of the Universe. Because the quandom outside the Universe has no distance and time, it is represented by a small black circle. Space-time is more drastically compressed in the strong gravitational zone near the outer space-time wall (the grey area) than in flat space-time (the white area).

2.3. The Ultimate End of the Universe

It is considered probable that heat radiation is emitted from the outer space-time wall like heat radiation is emitted from the surface of a black hole. If this is true, the outer space-time wall may be the source of cosmic microwave background radiation. Furthermore, it is highly likely that what is regarded as dark energy may really be energy emitted from the outer space-time wall, and what is regarded as dark matter may really be gravitational force exerted by the outer space-time wall. If the Universe is a space-time bubble created in a quandom, it is not unreasonable to think that other similar bubbles or universes may exist. Likewise, if the inside of a sufficiently large black hole in the Universe is also a quandom, space-time bubbles may have been created and smaller universes may have been born there. In reverse, it is also possible that the quandom outside of our Universe itself may be a black hole created in a larger universe outside of that quandom. Therefore, it is not only conceivable that there may be or may have been brother and sister universes parallel to our Universe, but also that universes and quandoms may exist hierarchically in multiple layers like a matryoshka doll.

The crucial point of this paper, which can be deduced from the theory, is that the Universe is not expanding, but is contracting. From this viewpoint, it is to be mentioned that C. Tsagas of Greece pointed out that the "apparent accelerated expansion" of the Universe is just an illusion caused by our relative motion to the rest of the Universe [10]. Although the Tsagas’s rationale that denies the accelerated expansion of the Universe is somewhat different from what is presented in our paper, it would be a time to address questions regarding the relative and multi-dimensional movements of the components of the Universe. It is also to be noted that Shafieloo and his coworkers investigated the so-called cosmic expansion using the Constitution SN Ia sample, baryon acoustic oscillation and cosmic microwave background data. They concluded that cosmic acceleration may have already peaked and that we are currently witnessing its slowing down [11]. They further pointed out that the effect they observed could correspond to dark energy decaying into dark matter [11].