Abstract: Third harmonic generation due to linearly polarized Gaussian laser pulse propagating through quantum plasma immersed in transverse wiggler magnetic field is studied using the quantum hydrodynamic (QHD)model. The effects associated with the Fermi pressure, the Bohm potential and the electron spin have been taken into account.Wiggler magnetic field plays both a dynamic role in producing the harmonic current and a kinematical role in ensuring phase-matching. It is shown that the harmonic radiation attain the maximum valueat an instant when the phase matching is satisfied and thereafter decreases at later duration of laser pulse. The quantum effects also add to harmonic generation in the phase-matched case.

All the above work has been done for classical plasma. Classical plasma physics has mainly focused on regimes of high temperatures and low densities, in which quantum mechanical effects play no role. Plasma where the density is quite high and the de–Broglie thermal wavelength associated with the charged particle i.e.,

and exceeds the electron Debye radius

the study of quantum plasma becomes important. Furthermore, the quantum effects associated with the strong density correlation start playing a significant role when

hold in degenerate plasma. However, the other condition for degeneracy is that the Fermi temperture

which is related to the equilibrium density

of the charged particles must be greater than the thermal temperture

In this paper, we study the third harmonic generation of a Gaussian laser pulse in quantum plasma in the presence of a transverse wiggler magnetic field incorporating the quantum effects including the spin-1/2 effect. We have developed the mathematical formulation with the help of the quantum hydrodynamicl (QHD) model [38, 39]. The QHD model consists of a set of equations describing the transport of charge density, momentum (including the Bohm potential) and energy in a charged particle system interacting through a self consistent electrostatic potential. QHD model is a macroscopic model and application is limited to those systems that are large compared to Fermi length of the species in the system. The advantages of the QHD model over kinetic descriptions are its numerical efficiency, the direct use of the macroscopic variables of interest such as momentum and energy and the easy way the boundary conditions are implemented.

. The oscillatory velocity due to this ponderomotive force betas with wiggler magnetic field

to exert a ponderomotive force at

couples with the electron density oscillations at

to produce a nonlinear current at

, which drives the third- harmonic radiation.

. The electric and magnetic fields of the laser pulse are,

is the propagation constant,

is the refractive index of the plasma and

is the group velocity. An external wiggler magneticfield

is applied to the plasma. The interaction dynamics is governed by the following set of QHD equations.

is the Planck’s constant divided by 2

is the Fermi velocity and

is the spin angular momentum with

being the Bohr magneton, the plasma frequency and the frequency of gyration are being defined as

respectively, where e and m are electronic charge and rest mass respectively and

is relativistic factor. The third term on the right–hand side of eq. (1) denotes the Fermi electron pressure.The fourth term is the quantum Bohm force and is due to the quantum corrections in the density fluctuation. The last term is the spin contribution to the momentum. The above equations are applicable even when different spin states are well represented by a macroscopic average. The wave equation for the current source is.

is the current density.

From the equation of motion (eq. (2)), the components of quiver velocity at

imparted to the plasma electron are obtained as

and the plasma frequency, the refractive index

can be written as,

<<1). From the above equations of velocities it is evident that wiggler field effects the motion of electron both in longitudinal as well as in transverse direction. Due to the above oscillations there is first order perturbation in density

which has been calculated using continuity equation (eq. 4) with,

The perturbed density and spin motion of electrons due to oscillatory velocities generate the oscillating currents. The current density is the sum of conventional source current

and the spin current due to spin angular magnetic moment

Eqs. (15) - (17) contain the collective effects of the laser and magnetic fields on the plasma electron. The first term in eqs. (15-17) arises due to the action of the radiation field on plasma electron while the second term denotes the effect of wiggler field, under the influence of electron spin and other quantum effects.

The plasma electrons acquire an oscillatory velocity at

due to the force

.The third order electron velocity components due to this force are,

. The phase matching condition for the process to be resonant is

Thus, the total nonlinear current from the above equation with the oscillation of

Here the harmonic of laser field only under the influence of wiggler magnetic field have been taken into account neglecting the harmonics of the wiggler.

There also exists a self- consistent third- harmonic field

The linear current density due to the above field is,

The third harmonic field is governed by wave equation,

the above equation reduces to

For the Gaussian pulse

is a function of time. For a given

, one cannot have phase matching

for harmonic generation at all times. If one matches the wiggler wave number at the peak of the laser pulse

. At all others times we have

we obtain the normalized third harmonic wave amplitude from eq (44).

Thus, the efficiency of third harmonic generation process is

In figures 1 and 2, the variation of normalized wiggler wave number with

is shown at different values of

has been shown for

and 0.3 respectively. The required wave number is smaller for higher values of

and larger for higher plasma density and pulse duration. The magnetic wiggler is employed to provide extra momentum for resonant third harmonic generation. However, due to short pulse duration the phase matching can be achieved for an instant only at particular wave number.

, for different values of plasma density in figure 3. The figure shows that for a constant plasma density, the harmonic grows with an increase in the wiggler field. Maximum efficiency appears at higher densities with increase in the wiggler field. The efficiency is maximum at an instant when the phase matching is satisfied and thereafter decreases at later duration of laser pulse. The maximum efficiency is attained at about

at different densities. The efficiency increases with the intensity of the laser. However, for relativistic regime

the efficiency tends to saturate. 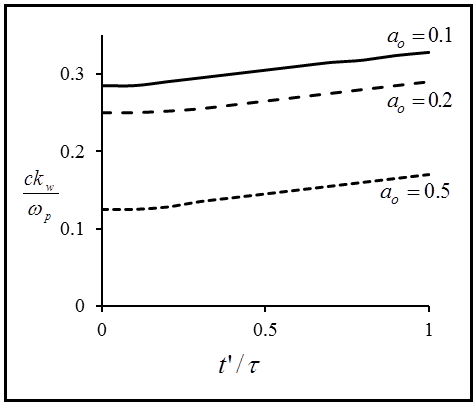 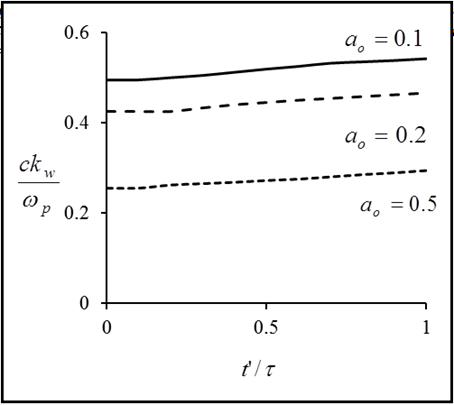 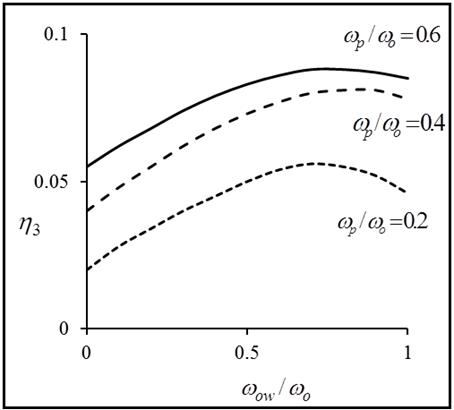 Figure 3. Variation of efficiency of phase-matched third harmonic with respect to the normalized wiggler frequency 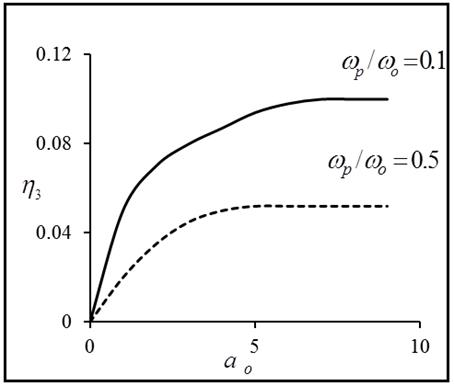 Figure 4. Variation of efficiency of phase- matched third harmonic with respect to the laser intensity