An Advanced Physics of Superfluidity and Superconductivity

Abstract: This paper presents an advanced Physics of superfluidity and superconductivity. We know from Quantum Mechanics that there are two types of particles, bosons and fermions. Single states can be occupied by any number of bosons while for fermions a single state can be occupied at most by one fermion. The charged boson system is found to exhibit superfluidity: the gauge-invariant Lagrangian, coupling between the bosons and the electromagnetic gauge field. It is observed that current conservation puts constraints on current correlation. Current correlation functions and electromagnetic responses are then determined for superfluids and metals. The response function in a metallic conductor is used in obtaining its several parameters which include conductivity, dielectric constant, polarization, magnetic moment density and magnetic susceptibility. The London equation is then deduced for superconductors.

A superconductor can be said to break a local symmetry spontaneously, while a superfluid breaks a global symmetry spontaneously. This statement shows the theoretical similarity of the two phenomena, but also emphasizes their only fundamental difference a superconducting metal is different from superfluid helium in many aspects. For instance, electrons are fermions, while helium atoms are bosons. A charged boson system is a superfluid in which exists coupling between the bosons and the electromagnetic gauge field as well as the existence of a conserved current. The gauge – invariant Lagrangian will be derived in Section 2 to demonstrate the coupling between current or charge carriers and the electromagnetic gauge field in superfluids. An expression for the conserved current in a superfluid will also be derived in Section 2. In Section 3, expressions for the current correlation functions and electromagnetic responses in superfluids will be deduced. The free electron model and the response function in metals will be presented in Section 4. In Section 5, the response function for the boson superfluid will be presented. The London equation will be deduced and other equations will be given for superconductors in Section 6. Table 1 presents the various critical temperatures of some element and compound superconductors. Figure 1 shows the functional relationships between metals, superfluids and superconductors. 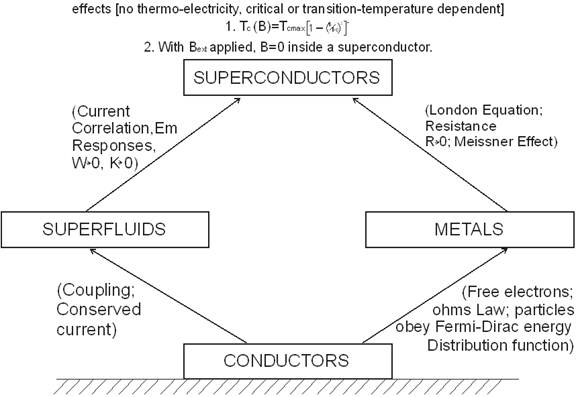 dnE = number of bosons having energy between E and E+ dE;

characteristics ratio of the system of bosons = 0 (for bosons).

Bosons are identical and indistinguishable, possess integer spins, and do not obey Pauli Exclusion Principle. Examples of boson systems are light photons, hydrogen H2 molecules, and liquid helium atoms. When a boson system is charged and cooled down to or below its critical temperature TC, it becomes a superfluid. The boson system superfluid can be analyzed using a theory with global U(I) symmetry which contains a conserved charge and can be coupled to a U(I) gauge field. The electromagnetic vector potential is a U(I) gauge field.

Is invariant (does not vary) under a global U(I) transformation

. However, it is not invariant (does vary) under a local U(I) transformation

represents the spatial directions. Let us use the Greek letter

represents the x-axis space-time coordinates. The coupling between the bosons and the electromagnetic gauge field can now be obtained by replacing

The following Lagrangian has an interesting property in that it is gauge- invariant:

Equation (5) only describes the coupling between the charge field

and the gauge field

. Hence, the complete gauge-invariant Lagrangian that describes the dynamics of both

in the superfluid consisting of interacting charged boson system and electromagnetic field is given by:

Electric field of the U (I) gauge theory =

= magnetic field of the U (I) gauge theory =

It is known that the considered scientific model with a global U (I) symmetry has a conserved charge. The gauged action is gauge-invariant:

be a solution of the classical equation of motion. Then

is the current which is equal to:

It can be seen that if

satisfies the classical equation of motion, then

is conserved. That is, we have:

is the density and

Equation (13) is also true for a zero

This shows current conservation in a neutral boson system.

For a charged boson system, the conserved current is given by:

It is interesting to see that the current in a charged boson depends spatially on the gauge potential. Thus, a superfluid conducts electricity without any resistance, couples with the existing electromagnetic gauge field and possesses a conserved current.

and the angular frequency

in the appropriate order. Now let us find the response of the superfluid system to an external gauge potential. Let us find how much current

it can be seen that the Lagrangian has the form:

to leading order in

, we obtain the current

For equation (18), the response functions are given by:

dependence of the current, we have an extra contact term

If we introduce the correlation function,

The above result applies for both zero and finite temperatures. It is noted that:

Due to current conservation, the components of

are not all independent. We have, in the w-k space,

can be determined from

For a rotationally invariant system, we can further decompose

into the longitudinal components,

, and the transverse components,

4. The Free Electron Model and Applications of Response Function in Mettallic Conductors

The postulates of the free electron theory of metallic conductors are:

[i] A metallic conductor is composed of weakly bound valence electrons of the metal’s lattice atoms.

[ii] The free electrons in the metal continuum are not bound to any particular atoms but move throughout the entire solid.

[iii] Each electron in the metal experiences no net force.

[iv] Each free electron in a metal moves throughout the metal under a constant electrostatic potential.

[v] At the boundaries of the metal, the potential rises rapidly because of the net electrostatic force acting on an electron at the metal boundary.

[vi] Thus, in this free electron model, the electrons in a metal can be accurately treated like a cloud or gas of non-interacting spin

fermions confined to a three-dimensional box.

[vii] The free electrons in a metallic conductor obey the Pauli exclusion principle and the Fermi-Dirac energy distribution statistics which is given by; 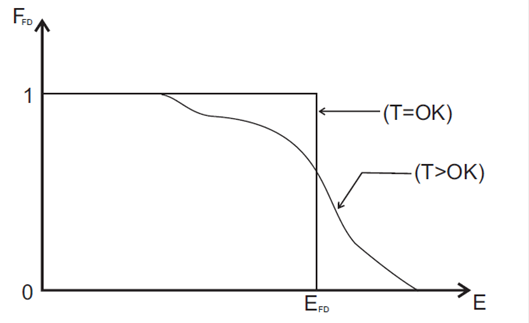 Figure 2. Plots of FFD Versus Energy E for T=OK and for T>OK for a metal.

Figure 2 shows the graph of FFD against energy E which has a form shown by the solid curve for T = 0 K. For T > 0 K, the graph takes on the form given by the dashed curve.

For a metallic conductor, the number of states, dS, with energies between E and E + dE is:

m = mass of an electron;

V = volume of the metallic conductor;

The density of states in the energy interval dE is:

The Fermi energy (at T = 0 K) for a metallic conductor is given by:

number of electrons per unit volume.

At this point let us demonstrate how the response function

is related to many important physical quantities. Let us consider a metal in this case. In the

It is noteworthy to assert that

is the external potential and

is the compressibility (at wave vector K). Hence,

Which is finite for all K. Thus, for

limit as well as in the

is an almost uniform electric field, which is expected to generate a current that has a direction given by

and a wave vector represented by K:

in the limit of

Should this be the case, then we obtain, for the metallic conductor, the conductivity

The real part of the conductivity,

Corresponds to energy dissipation. The imaginary part of the conductivity gives us the dielectric constant of the metallic conductor

And it can be seen again that the dielectric constant,

We have so far considered the

that is to be considered. This limit corresponds to magnetic susceptibility.

And it can be seen that the proportionality constant of equation (420,

, is the magnetic susceptibility of metallic conductor.

5. Response Function of a Superfluid

In this section, let us find the expressions or formulas for the boson superfluid. Let us, in this regard, consider the boson system superfluid Lagrangian with the gauge field (Equation 5). We integrate out the amplitude fluctuations and obtain an XY-model with a gauge field. To a quadratic order in

It can be seen that:

, in a superfluid has the following components:

6. The London Equation and Superconductivity

, is finite and is equal to

. The magnetic susceptibility of a metal conductor

The real part of the conductivity,

Is zero for finite frequency. If we choose the coulomb gauge

, we find a relationship between the current and the gauge potential:

Equation (47) is the famous London equation for superconductors. It is responsible for many novel properties of superconductors such as persistent current, the Meissner effect, etc.

For a Superconductor, we have:

BC = critical magnetic field applied (when B=0 inside);

It is observed also that:

B = externally applied magnetic field (Wb/m2); Bc = critical value of B.

This equation is valid as long as R is finite.

In this paper, we have derived gauge-invariant Lagrangian for a superfluid which demonstrates the coupling between the charged superfluid particles and the electromagnetic gauge field. It also shows that there is a conserved current in the superfluid field.

Current correlation functions and electromagnetic response functions are found for a superfluid. Current conservation puts constraint on current correlations. Some important physical quantities for a metallic conductor, such as compressibility, dissipation, conductivity, polarization, dielectric constant and magnetic susceptibility, are obtained for the conductor. A conductor becomes a superconductor when it is subjected to the transition or critical values of an externally applied magnetic field or absolute temperature. The London equation is derived and the Meissner’s effect is discussed for a superconductor.

Table 1. Characteristics or Critical Temperature of Some Superconductors.