Abstract: This paper investigates an online gradient method with inner- penalty for a novel feed forward network it is called pi-sigma network. This network utilizes product cells as the output units to indirectly incorporate the capabilities of higher-order networks while using a fewer number of weights and processing units. Penalty term methods have been widely used to improve the generalization performance of feed forward neural networks and to control the magnitude of the network weights. The monotonicity of the error function and weight boundedness with inner- penalty term and both weak and strong convergence theorems in the training iteration are proved.

A novel higher order feedforward polynomial neural network is known to provide inherently more powerful mapping abilities than traditional feed forward neural network called the pi-sigma network (PSN) [2]. This network utilizes product cells as the output units to indirectly incorporate the capabilities of higher-order networks while using a fewer number of weights and processing units. The neural networks consisting of the PSN modules has been used effectively in pattern classification and approximation problems [1, 4, 10, 11].There are two ways of training to updating weight: The first approach, batch (offline) training[18],the weights are modified after each training pattern is presented to the network. Second approach, online training, the weights updating immediately after each training sample is fed see [13]. The penalty term is often introduced into the network training algorithms has been widely used so as to control the magnitude of the weights and to improve the generalization performance of the network [6, 8], here the generalization performance refers to the capacity of a neural network to give correct outputs for untrained data. Specially cause, in the second approach the training weights updating become very large and over-fitting tends to occur, by adding the penalty term in into the cost function, when use second approach has been successfully application see [3, 7, 12, 14], which acts as a brute-force to drive unnecessary weights to zero and to prevent the weights from taking too large in the training process. In the work area of penalty term at the same of the inner-penalty term (IP), which have worked to reduce the magnitude of the network weights with efficiency improve the generalization performance of the network [5, 9, 17]. In this paper, we prove the (strong and weak) convergence of the online gradient with inner penalty and the monotonicity of the error function and the weight sequence are uniformly bounded during the training procedure with inner-penalty.

The rest of this paper is organized as follows. The neural network structure and the online gradient method with inner-penalty are described in Section 2. The preliminary lemmas are disruption in Section 3. The convergence results are presented and the rigorous proofs of the main results are provided in Section 4. Finally, in Section 5 we conclusions this study.

the weight vectors connecting the input and summing units, and write

. We have included a special input unit

corresponding to the biases

with fixed value-1. The structure of PSN is shown in Figure 1. 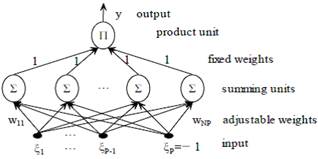 is a given activation function. For an input

, the output of the network is

The network supplied with a given set of training samples

. The error function with a inner penalty given by

is a inner penalty coefficient and

The gradient function is given by

Given an initial weight

, the online method with inner penalty updates them iteratively by the form

is the learning rate in the

the usual Euclidean norm and the corresponding derived matrix norm and the following Assumption is imposed throughout this paper.

are chosen to satisfy the condition:

are contained in bounded closed region

, and there are exist points in set

The next lemma present the montonicity of the sequence

. It is essential for the proof of weakly convergence of PSN with penalty, presented in the following Theorems. For sake of  description, we denote

To begin with, first we present a few lemmas as preparation to prove Theorems

Proof .By Assumption 2and Cauchy- Schwartz inequality, we have

. This is completes the proof.

Lemma 2.Suppose Assumptions 1~3 are satisfied, and the weight sequence

are on the line segment between

After dealing with (14) by accumulation

This is completes the proof.

is continuous and differentiable on a compact set

has only finite number of point. If a sequence

Then there exists a point

Proof. This result is basically the same as Theorem 14.1.5 in [16], and the detailed proof is thus omitted.

Now, we can elucidate and proofs the convergence theorems, which we needed

Theorem 1.(Monotonicity):  Let Assumption 1~3 are valid and the weight sequence

By Assumption 3,which satisfies

This completes the proof of the Theorem 1.

Theorem 2. (Boundednss): Suppose that Assumption of Theorem 1 are valid, the weight sequence

Proof. By Assumption 1, and Theorem 1, we have

Let the second part of above equation be

be the orthogonal complement space of

is a base of the space

Then the solution is as follows

of the coefficient determinant is

are bounded uniformly bounded. So from (29), we know

are uniformly bounded. In all, we get

are uniformly bounded, i.e., there exist a bounded closed region

Theorem 3. (Weak convergence): Suppose that Assumption 1~3 are valid and the weight sequence

Furthermore, if Assumption  4  is also valid,  we have the strong convergence: There exists

Note that the error function

defined in (2) is continuously differentiable. By (43), Assumptions 4 and Lemma 3, immediately get the desired result. This completes the proof.

Through our study of this paper, the monotoncity of the error function

in formula (2) and the weight sequence boundedness

via formula (4) ~ (5) for the online gradient method with inner-penalty are presented, under those condition both weakly and strongly convergence theorems are proved.

We gratefully acknowledge Dalanj University for supporting this research. And our thanks to the anonymous reviewers and the editors for their previous helpful comments and valuable suggestion for their kind helps during the period of the research.