Effect of Educational Nursing Intervention about Osteoporosis on Adult's Knowledge

Osteoporosis is a bone disease associated with decrease bone mass and weakness of the skeleton that lead to bone fragility and fractures. It is a most common cause for disability and death, especially in post-menopausal women and advanced age in men [1]. Early diagnosis can minimize the risk of fracture and generally socio-economic load [2]

Osteoporosis is a worldwide health problem affecting more than 200 million people. Female are at high risk for disease because female have lower bone mass and smaller bones than men", adding menopause period lead to intense reduction into estrogen level and lose calcium more rapidly than men [3].

The disease started "silently" and progressively, without appearance of any symptoms until fracture occurs, usually at the wrist, hip or spine. Osteoporotic fractures affect quality of life negatively and often result in pain, loss of function and, in the worse cases, death. The impact of the disease on relatives should not be ignored, as they must allocate time and energy helping a family member who lacks autonomy [9]

Life style modification through correct or balance diet and performing activity has an important role in reducing or eliminate risk of osteoporosis. Diet should contain micronutrients as calcium, magnesium, phosphorus, sodium, potassium, various trace elements, vitamins and macronutrients as protein and fatty acids are important elements to prevent the risks of bone fractures, these nutrients and food ingredients have a positive or negative impact on bone health [3,5,6].

Physical activity is the greatest important role that improving strength of bone, flexibility of joint, minimize incidence of fracture in people at high risk, weight bearing exercise as walking is the best example, three or four time per week for 30 minute has a positive effect in reducing osteoporosis [11].

Educational programs for the community awareness to osteoporosis demonstrated that a greatest achievement in acquire knowledge and developed health behavior for disease prevention, so Great responsibility rests with the nurses to contribute in prevention of osteoporosis [12].

1.1. Significance of the Study

Every 3 seconds osteoporotic hip fracture occurs as a serious complication to osteoporosis, annually it affect 200 million women and 8.9 million client in the world had fracture by it, this fracture increase mortality and morbidity by decrease client quality of life due to, prolonged hospital admission and the client mostly treated by surgical intervention so increasing in directly and indirect cost [3,4,5]

To determine the Effect of Educational Nursing Intervention about Osteoporosis on Knowledge of Adults.

There will be change of knowledge about osteoporosis after Educational Nursing Intervention.

A quasi experimental research design with pre posttest was utilized to achieve the aim of study.

The study was conducted at orthopedic outpatient's clinic at Menoufia University Hospital.

A convenience sample of 300 adult and their relative attended for orthopedic outpatient clinic were undertaken who fulfilled the following inclusion criteria:

• Able to participate in the study.

Exclusion criteria: free from any signs &symptoms of osteoporosis

To achieve the aim of study one tool was utilized to collect the data:

An instructional interviewing questionnaire to assess knowledge about osteoporosis. It consisted of 3 parts:

Part one; Socio demographic data which include information about age, sex, marital status, level of education.

The questionnaire contained, items related to the patients’ demographic criteria, medical history, as well as 40 patients’ knowledge assessment items each was two points Liker scale (1–2) as (2) for incorrect answer and don’t know, (1) for correct and complete answer. The questionnaire was evaluated giving a total score of 1-40. The total score of each subject was categorized arbitrary into "adequate knowledge" when the patient achieved less than or equal ≤ 50% of the total score, and inadequate knowledge was considered when the student achieved more than > 50% of the total score.

• A written Approval was obtained from responsible authorities after explanation the purpose of the study.

• Tool was constructed by the researchers after reviewing of relevant literatures and was tested for content validity by 5 experts in Medical Surgical Nursing.

• A consent was obtained from subject to gain his / her cooperation. Each participant has a right to withdrawal from the study without any effect on their hospital routine care.

• The researchers organized the subjects into small group for interview, which consisted of (4-6) adult participant who fulfilled the inclusion criteria and the researchers explained the purpose of study.

• Pretest was applied to assess knowledge of participant about osteoporosis.

• The educational intervention was delivered by the researchers at one session for one hour; this session clarify information about definition, causes. risk factor, manifestation, prevention through life style modification( exercise –diet allowance and not allowance ) and management of osteoporosis. Before the researchers close the session they asked the subjects for any question or for further clarifications.

• The researchers gave each participant colored booklet illustrated information with pictures for more clarification about osteoporosis.

• The researchers followed the participants by telephone to know the next orthopedic clinic visit for interviewed them again to apply posttest questionnaire.

Qualitative data were presented in the form of frequency distribution tables, number and percentage. It was analyzed by chi-square (χ2) test. However, if an expected value of any cell in the table was less than 5, Fisher Exact test was used( if the table was 4 cells), or Likelihood test (if the table was more than 4 cells). Level of significance was set as P value <0.05 for all significant tests.

Table (2): This table illustrated that, frequency of medical history of studied sample. Just 14.7% of the sample was having family history for osteoporosis. One quarter of the subjects were having fractures before as a result of falling. More than two third of studied sample (67.7) were complained from chronic disease in which diabetes and hypertension were most common. Sixty percent of the sample was taking medication for a long time while approximately one quarter of them were taking vitamin or dietary supplement.

Table (3): This table illustrated that, female associated risk factors. Near to third of the sample were have irregular menstruation. Females who have stopped period for six months were 18.2%, while only 3.9% of them were have their period stopped before age of 45 years. Just 4.4% were having hysterectomy or overectomy and 4.9% were taking contraceptive pills. 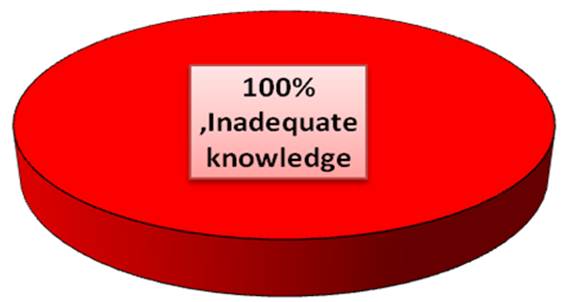 Table (7): this table revealed that, Relation between knowledge post intervention groups and physical activity. There was a statistical significant difference related to walking as a type of physical activity.

Regarding to Scio demographic data, the current study presented that the majority of participant were female, most of them at the age 31 to 60 years old. This was agreement with Kahsay, et al., 2013 [13] who stated that more than half of sample in this study were female at the age of 40 to 50 years old. This may be women at a high risk of osteoporosis due to reduction of estrogen which lead to decrease calcium in bone & also with the aging process bone become thinner which is predisposing factor to osteoporosis. The present study stated that, three quarter of studied sample had no history of fracture. This was consistent with National Institute of Heath, 2015 [14] who stated that people who had past history of fracture liable to osteoporosis disease over the age of 50 years old.

Concerning effect of socio-demographic data on knowledge total score of post intervention groups, the current study showed that related to age the most of participant at the age of 45 years old and more had adequate knowledge, this result was similar to result of Rodzik, 2008 [17] who found that the older people had improvement of knowledge score than younger. This is due to their biggest and great concern for study and Facebook and have no block to listen to an educational program, while the older people in need of this information in addition to that they have enough time to attend the educational program

Regarding gender the present study clarified that there was no significant difference between women and men regarding knowledge. This result was in contrast with Werner, 2005 [18] who stated that women had adequate knowledge than men. This may be due to number of attended men less than women as they represent about one third of the sample in the present study.

Regarding educational level the current study revealed that there was significant difference related to level of education and knowledge of osteoporosis. This result was in agreement with Etemadifar, 2013 who presented that women with a higher education level have significantly better knowledge about osteoporosis than women with a lower educational level. While this result was contrast with May, et al 2010 [19] who found that, there was no significant correlation between education level and osteoporosis knowledge. This is probably due to the greater level of education led to the understanding and the acquisition of information

The present study revealed that there was significant difference related to marital status and knowledge of osteoporosis, married participant had higher adequate knowledge than other. This result was in the same line with Zakai, 2015 [20] who presented that married subjects were more knowledgeable about osteoporosis than single. This is due to married women had loss of calcium during pregnancy & delivery, so women especially married had careful attention about any information about osteoporosis,

Regarding to income; the current study showed that there was significant difference related to income & knowledge, sample had enough &low income had better information. This result was consistent with the study by Zakai, 2015[20] this study revealed that participant included in study that fall in the low economic level have a better knowledge about osteoporosis. This result explained as these groups of participant always go to hospitals or clinics to seek them; so, they can gain information by a doctor and nurse. Furthermore, information obtained from the researcher

The current study illustrated that participant who attended educational program had adequate knowledge rather than not attended. This result was in the same line with Werner, 2005[18] who noted that people who previously received knowledge were more knowledgeable about the disease than those who hadn't any information previously.

Regarding physical activity the present study revealed that, there was a statistical significant difference related to walking as a type of physical activity post educational nursing intervention. This result was agreement with Bonaiuti et al; 2002 & Yamazaki. 2004, [21,22] who stated that, the majority (86.5%) of the studied sample knew that walking had an important role in healthy bone; it has impact on bone density. In addition to Hossein, 2014 [23] who described that walking build a stronger bones and muscles and can be used to increase strength, flexibility and balance. Also stated that, Participant identified that regular exercise can protect against osteoporosis, but this knowledge did not translate to practices.

Educational intervention about osteoporosis should be held periodically. Educational program should be published through mass media.