Abstract: A fiber doped with erbium laser is used in long distance communication over networks of fiber optics. Especially, in under water communication links where optical signals can be amplified by joining erbium-doped fiber at appropriate locations in the network of the fiber. Thus, a signal, when optically transmitted will get amplified and this will be useful when the signal travels between continents. There is no need for converting an optical signal into an electrical signal, amplified and then reintroduced into the fiber for transmission. The latest research trend is to produce ultra-short pulse widths of the order of 100fs and with a pulse repetition rate of the order of 10GHz. Here I have used an Er3+ doped silica fiber for optical pumping λ=0.98µm or λ=1.48µm wavelength using radiation from a diode laser [Fig. 1]. A coupler was used to select the wavelength, which permits this light to reach the optical fiber transmission system, without disturbing the signal. The optical fiber is spliced into the transmission lines, which acts as an optical isolator. This fiber is constantly pumped by the diode laser. When the pulses pass through the system, they get amplified, while the pump light is reduced.

Many rare-earth atoms like Erbium, etc, can be employed as dopants in crystals or in glass. When external sources are used, these active elements can be pumped to reach the desired level of ‘population inversion’. In fiber optic communications, normally one is interested in wavelengths between λ = 1540 to 1550 nm region and Erbium doped silica fibers are suitable for this purpose. The same fibers when pumped with λ = 0.98µm or λ=1.48µm are used as optical amplifiers in optical communication systems [Ref 1-4]. In order to convert its application from an amplifier to an oscillator, Erbium doped with silica fiber is placed in an ‘optical resonator’, by using Fiber Bragg gratings (FBG) [Fig.2] below.

The fiber Bragg grating is used for an all fiber wavelength demultiplexer.A Germanium doped silica glass is photosensitive and when ultraviolet (UV) light is passed through the fiber; the refractive index of the doped silica glass is slightly changed. It is thus possible to create a periodic variation in the refractive index of the core itself, thereby creating a ‘phase grating’. Using the Bragg’s condition, that

where λB is the Bragg wavelength, Λ is the ‘grating period’, neff is the effective index of the mode; large coupling may arise between to and fro propagating modes. With a proper design, one can ensure that most of the power is reflected effectively and other signals are transmitted. Thus, the main use of such a FBG is that they are fiber compatible and the loss generated due to interconnection between fibers is very low.

At both the ends of the fiber, FBG act as mirrors in a laser resonator [Fig.3].

3. Energy Levels and Mechanism of Excitation in Optical Fiber Laser

The Erbium doped silica fiber laser is a three-level laser. The energy level scheme for the optical pumping is shown below here [Fig.4]. 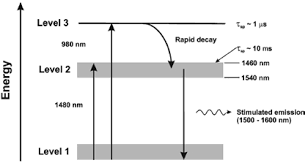 In this scheme, optical pumping takes place from the ground state 4I15/2 to the 4I11/2 at a wavelength of λ= 0.98µm.Optical pumping can also occur from the lowest levels (ground state) to the upper laser state, 4I13/2 at λ=1.48µm.Then rapid relaxation occurs to lowest sub-levels of 4I13/2 from which ‘laser action’ is obtained in the region from λ=1.53µm to λ=1.56µm.The mechanism of ‘population inversion’ is strange in this level. The lower level of the fiber optic laser acts similar to a dye laser. Higher levels of this state are not populated to a significant extent and hence higher levels act as lower level of population inversion. Thus there will be a non-radiative decay of population into the lower levels of 4I13/2 state [Ref 5-7].

The Erbium (Er3+) is a rare-earth ion and has eleven electrons in the 4f orbital. It has a wide ‘gain bandwidth’ resulting from transition between the 4I15/2 and the 4I13/2 states. When this fiber is placed in a host medium all the (2J+1) components of the multiplets of this erbium ion are split and are homogeneously broadened due to neighboring oxygen ions in the silica glass. Hence all the sub-levels are further broadened due to inhomogeneous broadening, resulting in a wide "gain bandwidth" which is useful for the broadband optical communication application. The absorption cross-section of the levels, 4I15/2 → 4I11/2 (λ=1.48µm) and the levels 4I15/2 → 4I13/2 (λ=0.98 µm) give rise to two strong peaks. The 4I15/2 level is split into sixteen sub-levels (2J+1, with J=15/2) and the 4I13/2 level is split into fourteen sub-levels (2J+1, with J=13/2).Population inversion can be obtained through optical pumping using the λ=0.98µm, which lifts the electrons to the upper state 4I11/2. An electron at this state has a 1µsec as lifetime and then it decays to the intermediate state 4I11/2. The other intermediate state 4I13/2 is a metastable state and has a lifetime of t=10-3 seconds. Each decay results in spontaneous emission of a photon and so t=tspontaneous..It may be noted here, that it is because of this long duration of ‘spontaneous lifetime’, lack of "Crosstalk" between communication channels have been made possible. Hence Erbium silica fiber is a three level laser and the laser emission uses the ground state as the lowest state. It should be noted that the erbium doped glass fiber laser must be pumped hard in order to achieve gain [Fig.5]. 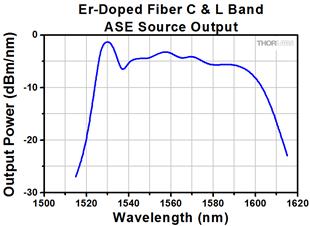 Also, without a Fiber Bragg Grating (FBG), the erbium fiber can be used only as an inline optical amplifier in telecommunication networks. The following Table I below gives the properties of an Erbium-doped fiber used as an amplifier.

The main innovation of an Er3+ doped with silica fiber laser is in long distance communication over networks in fiber optics known as "Wavelength Division Multiplexing" (WDM). It is specially applied to ‘under water’ communication links. Optical signals can be amplified by putting pieces of erbium doped fiber at proper locations in the network [Fig.6] of the fiber.

A signal that is optically transmitted then gets an optical boost directly or gets amplified as the signal travels between continents. Since fiber lasers are very easy to construct and operate, they may replace in future, the distributed feedback semiconductor lasers (DFB).Further, the erbium doped fiber lasers have applications in computer links, spacecrafts, process control, industrial automation and other applications. We made a theoretical calculation for an amplifier having a doping concentration of 5 x 1024 m-3, with a signal wavelength λs = 1.535 µm and an absorption cross-section at λs, σsa =4.642 x 10-25 m2, emission cross-section at λs,  σse =4.642 x 10-25m2, with a lifetime for spontaneous emission, τsp =1.1 x 10-12 second. The length of the doped fiber = 10 m and its confinement factor Γs =0.81.We assumed that it is an erbium doped silica glass fiber and that it has a three-level lasing system and the transitions are characterized by different absorption and emission cross-sections. The erbium ion density is taken as NEr and we used a single mode fiber with a pump wavelength of λp =0.98µm with a signal wavelength of of λs =1.55µm. [Ref 8-10].NG is taken as the ground state in Er3+ matrix (4I15/2) and NM is taken as a metastable state (4I13/2).Usually, pumping this system by λ =0.98µm will take the ground state erbium ions to the (4I11/2 ) level also known as excited state level E2.After reaching this level, the ions rapidly undergo relaxation to metastable energy level EM. Hence.

We also we assume that NM/NEr is a constant throughout the length of the fiber and is equal to 0.71, though in practice, it may vary. The total gain G for a lumped fiber of length L is now calculated using the equation,

The result is gain G=30 dB.If we substitute that NM/ NEr =1 and Γs =1, then we get maximum possible gain Gmax = 80 dB.A more realistic value of the Gmax can be obtained using the principle of conservation of energy, where the formula for calculation is given by

The author wishes to acknowledge the constant encouragement given to him by the management and by Prof. Dr. C. V. Jayakumar, Principal, Sri Sairam Engineering College, Chennai to publish research works in reputed international journals.