Study of Gamma-Ray Attenuation Coefficients of Some Glasses Containing CdO

Abstract: Iron–phosphate glasses containing heavy metal cations are important material, especially when used to attenuate γ-ray and / or fast neutrons. Therefore, some glasses had been prepared, having the composition [(70 mol % P2O5. 15 mol % Na2O. 15 mol % Fe2O3) + x CdO, where 0 ≤ x ≤ 30 mole]. The melting temperature was 1200 ºc and the annealing temperature was 300 ºc. The obtained solid glasses were then examined from γ-ray attenuation point of view, where both the linear and mass attenuation coefficients were studied for varying amounts of CdO and different γ-ray energies emitted from 60Co, 137Cs and 152Eu radio-active sources. It was found that as CdO was gradually increased, the linear and mass attenuation coefficients increased gradually, while the half value layer decreased. On the other hand both linear and mass attenuation coefficients decreased and the half value layer increased as the energy of the incident γ-ray increased. Finally it can be concluded that these composition glasses can be used as good γ-ray shield especially at low gamma-ray energies.

The object of this paper is to determine the linear attenuation coefficients (µ), mass attenuation coefficients (µm) and half value layer (HVL) of some sodium iron phosphate glasses obeying the composition 15 mol % Na2O.15 mol % Fe2O3.70 mol % P2O5.x CdO , where CdO was introduced in elevated amounts (x = 5, 10, 15, 20, 25 and 30 mole) by addition.

Analytically pure grade chemicals were used to prepare the supposed glass samples. The batch mixtures were melted in porcelain crucibles at 1200º C for 2h until homogeneous glasses were obtained. The melts were then poured on a copper plate at room temperature and the obtained solid glasses were then annealed at 300º C and the oven was turned off and was left to cool to room temperature, in order to remove any internal stresses. The obtained samples were polished to obtain square samples of 1 cm edge and 1 mm thickness.

IR absorption spectra of the studied glass were measured at RT in the range (4000 – 400) cm-1by using a Fourier Transform Infra-red spectrometer (type Perken Elmer, model RTX). KBr disc technique was used, where 2 mg of the sample under test was weighted and mixed well with about 200 mg KBr and was then pressed to obtain disk shape sample suitable for IR measurement.

Attenuation coefficients of the studied glass system were measured in a narrow beam transmission geometry. The experimental setup of such geometry is exhibited in Fig. (1), as outlined in Ref. [10], was used in the present work. . A 3'' x 3'' NaI (TI) crystal detector with energy resolution of 6.7 % under good geometry condition in conjunction with multi-channel analyzer (MCA) were used.

The examined sample was placed in the specimen holder at a distance of 4 cm from the source. The distance between source and detector was 7 cm. A 60Co source of activity 6.9 µCi, 137Cs source of activity 10 µCi and 152 Eu source of activity 3.9 µCi were used for different photon energies. Incident and transmitted intensities of photons were measured using the MCA for fixed time for all samples, by selecting an arrow region symmetrical with respect to the centroid of the photo peak.

The visual examination of all glasses after annealing showed that all samples exhibit amorphous nature. The internal structure and the building groups of these glasses were firstly examined applying infra-red analyses. 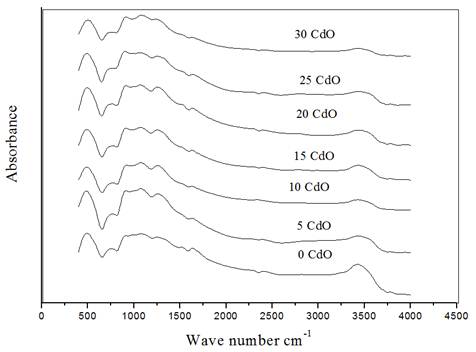 Fig. (2). The as measured IR spectra of all samples.

This figure reveals that the range of interest is in between 400 and 2000 cm-1 only, since it is known that all the bands appeared in the range from 2200 to 4000 cm-1 can be attributed to H2O, H-O-H and hydrogen-bond vibrations. Also the band appeared in between 1600 cm-1and 1770 cm-1in all glasses can be attributed to the stretching vibration of H-O bond. The appearance of these bands evidenced the presence of some –OH and H-O-H groups, which may be due the used KBr disk technique [11-13].

Accordingly, the range from 400 to 2000 cm-1 was thoroughly examined by applying the deconvolution program to extract as really as possible the correct IR bands. However Fig. (3), shows the deconvoluted spectrum of sample no. (4), that contains 15 mol CdO as representative figure. All other samples show approximately similar IR spectra. 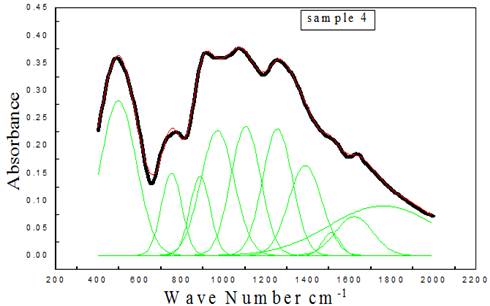 Fig. (3). The deconvoluted spectrum of sample no. (4), that contains 15 mol CdO, as representative figure.

It was found that some major IR bands appeared in the recorded spectra and they are listed in Table (1).

Table (1). Frequency ranges characteristic of the obtained IR spectra of the studied glasses.

These bands can be attributed to the vibration of the following, structural groups or bond vibrations,

1-  The band appeared between 488 and 505 cm-1 in all glasses may be due to two overlapped bands, the first one indicated the presence of some iron ions in the octahedral coordination state (FeO6) occupying glass network modifier positions [14], the second one may be due to Cd-O stretching vibration [15].

5-  The band appeared between 1084 and 1105 cm-1 in all glasses can be assigned to the symmetric stretching vibration of PO2 as well as the vibration of (P-O)ــ groups in Qo speeches[21].

7-  The band appeared between 1386 and 1443 cm-1 in all glasses, can be assigned to the asymmetric stretching vibration modes of the non-bridging oxygen atom bonded to phosphorus atom and/or the vibration of P=O bond in Q2 speeches [23].

8-  The band appeared between 1506 and 1525 cm-1 can be assigned to the vibration of the present molecular water or hydroxyl-related bonds [11].

The IR results indicated that many structural groups due to phosphorus ions appeared such as P=O, PO2, PO4…...etc in different Qn speeches. All the present sodium and iron ions as well as all the introduced cadmium ions participate in the glass networks as glass network modifiers. That is both bridging and non – bridging oxygen anions are present in the glass networks of the studied glasses.

Gamma ray with different energies in the range from 121.8 to 1407.9 keV were used to study the attenuation coefficients parameters for the investigated glass compositions. 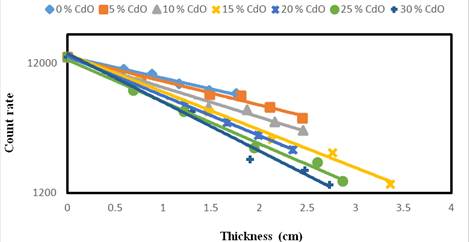 Fig. (4). Count rate as a function of the barrier thickness at an incident γ-ray energy of 121.8 KeV as representative figure.

It can be noticed from Fig.(4) that, the intensity of the γ-ray decreases exponentially with increasing the barrier thicknesses. The straight lines are due to the obtained log values of the measured γ-ray intensities. The slope values of these lines were used to determine the linear attenuation coefficients (µ) in cm-1 using the following equation [24],

It was shown that the linear attenuation coefficient for all glass barriers increased with increasing CdO concentration at all γ-ray energies. From another point of view the linear attenuation coefficients as a function of γ-ray energies for different CdO concentrations are shown in Fig. (6.a), where it shows gradual exponential decrease and it tends to be stable at about 1100 KeV photon energy. The behavior is clearly observed from Fig. (6.b) that represent the obtained values for sample containing zero CdO. 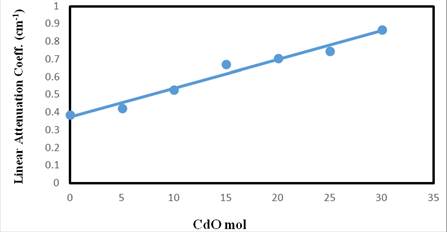 Fig. (5). The variation of the linear attenuation coefficient of γ-rays at 121.8 keV versus CdO concentration, as representative figure. 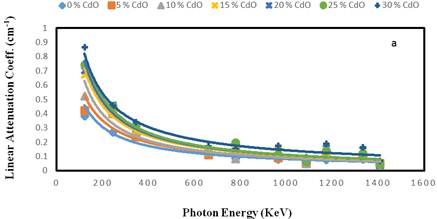 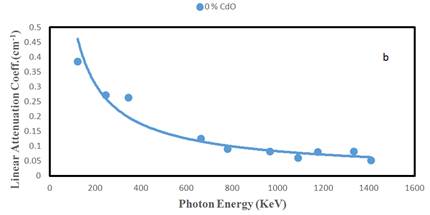 Fig. (6). The variation of the linear attenuation coefficients as a function of γ-ray energies.

It was observed that a sharp decrease in the linear attenuation coefficients takes place with the increase of gamma ray energy from 121.8 to 344.27 keV. That could be explained because in these energy region the reaction between the glasses sample barriers and gamma ray is only due to the photoelectric effect. In the region of 661.6-1407.9 KeV, a slight decrease in the linear attenuation coefficients was seen due to the fact that the reaction in this region is Compton scattering or may be due to both photoelectric effect and Compton scattering reactions.

The mass attenuation coefficients can be calculated from the following equation [5],

The experimental density values (ρexp) of the studied glasses has been measured and calculated applying the liquid displacement method using Archimedes formula,

Where wa and wt is the weights of the sample in air and in liquid respectively and ρt is the density of the used liquid [25].

The obtained density values for all glass samples are listed in Table (2), as function of CdO content.

Table (2). the change in density as a function of CdO content.

From the table, it could be seen that the density values increased gradually with the gradual increase of CdO. Such increase can be attributed to the high density value of CdO (8.15 g/cm3) which is greater than the density of Na2O (2.27 g/cm3), Fe2O3 (5.242 g/cm3) and P2O5 (2.39 g/cm3). So when CdO was added in elevated amounts for the studied glass system, the density will logically increased.

The values of the mass attenuation coefficients at different γ-ray energies are plotted versus CdO concentration as shown in Fig.s (7, 8 and 9) respectively. The obtained values are listed in Table (3). 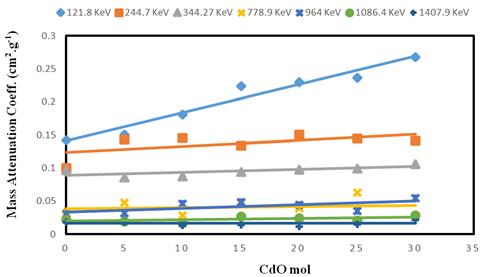 Fig. (7). The variation of the mass attenuation coefficient values of γ-ray emitted from 152Eu radioactive source for different concentrations of CdO. 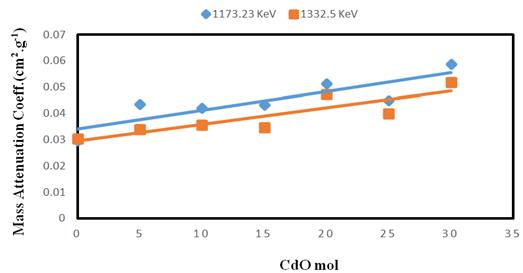 Fig. (8). The variation of the mass attenuation coefficient values of γ-ray emitted from 60Co radioactive source for different concentrations of CdO. 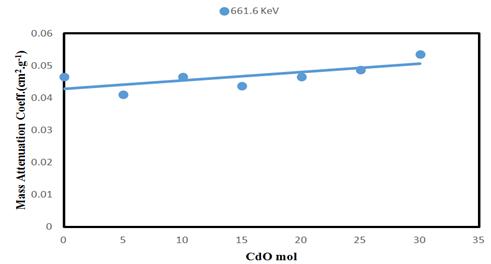 Fig. (9). The variation of the mass attenuation coefficient values of γ-ray emitted from 137Cs radioactive source for different concentrations of CdO.

It can be observed from this table that the mass attenuation coefficient exhibits approximately gradual increase as CdO was increased, but it shows approximately gradual decrease as the γ-ray energy was increased. This behavior showed a good confirmation that the introduced CdO act to increase the mass attenuation coefficient. It appeared also that the studied glass sample exhibit high efficiency at low photon energies and their efficiency decreased as γ-ray energy increased [26].

The mass attenuation coefficients as a function of γ-ray energies for different CdO concentrations are represented in Fig. (10). 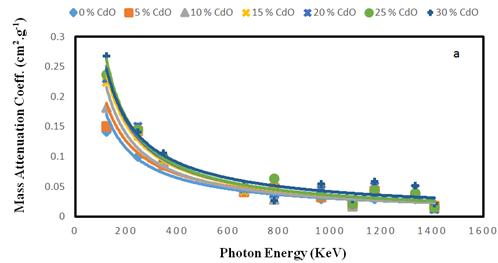 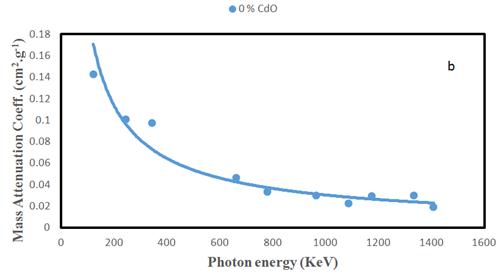 Fig. (10). The variation of the mass attenuation coefficients as a function of γ-ray energies.

The Half value layer (HVL) of the studied glasses was also calculated from the following equation [27],

where X1/2 is the HVL and μ is the linear attenuation coefficient.

The values of the HVL are listed in the Table (4).

Sodium – iron – phosphate glasses containing varying amount of CdO were thoroughly investigated to attenuate different gamma-ray energies. The investigation of γ-ray attenuation values showed that, as CdO was gradually increased, the linear and mass attenuation coefficients increased gradually, while the half value layer decreased. On the other hand, as the γ-ray energy was increased both linear and mass attenuation coefficients decreased, while the half value layers increased. It can be concluded that these glasses system could be used as γ-ray shield especially at low gamma-ray energies. The sample containing 30 mol CdO is the preferable γ-ray shielding material among the studied samples.