Abstract: In this paper, I focus on describe, calculate and analyze of molecular dynamic (MD) simulations using wavelet transform (WT) techniques by analogy with its use in signal and image processing, so that I would like to talk about the theoretical background wavelet transform methods, including what properties they have, their common types, and how to operate them. Secondly, I would introduce the continuous wavelet transform, which is especially well-suited for time course data such as molecular dynamics simulations., the WT permits filtering out the high-frequency noise without completely omitting the high-frequency phenomena whose contribution is crucial in cases where the dynamics is localized in frequency and time. Medical applications could be studied in which biomedical related research requires lots of mathematical and engineering techniques to analyze data. The WT is observed to excel in reconstructing the original signal by a subset of the basis used in the analysis and in identifying the occurrence of rare phenomena by examining the wavelet energies at high-resolution levels.

Great progress has been made in applying linear time-invariant techniques in signalprocessing. In such cases the deterministic part of the signal is assumedto be composed of complex exponentials, the solutions to linear timeinvariant differential equations. However, many biomedical signalsdo not meet these assumptions. Thus, the emerging techniques of time-frequency analysis can provide new insights into the natureof biological signals [1-5].

Molecular dynamics (MD) has become a common method for studying the motion of proteins over time, and it is the only available technique for examining continuous fine granularity motion at atomic resolution[10-12]. By numerically integrating Newton’s equations of motion, one can produce a series of snapshots of a protein’s trajectory through time. These snapshots, when saved at sufficiently high resolution, serve as stop-motion photography and provide a great deal of information about how proteins behave.

In this paper, we focus on the analysis of MD simulations using wavelet-based techniques. It is worth noting, however, that any molecular system that evolves over time can be analyzed with these same wavelet techniques. Nrownian dynamics simulations and elastic networks are two examples of systems whose data have a similar structure to MD systems and which could benefit from wavelet analysis as well[13-15].

To extract information from signals and reveal theunderlying dynamics that corresponds to the signals, proper signal processingtechnique is needed. Typically, the process of signal processing transforms atimedomain signal into another domain since the characteristic information embedded within the time domain is not readilyobservable in its original form. Mathematically, this can be achieved by representing the timedomain signal as a series of coefficients, based on a comparisonbetween the signal x(t) and template functions {Yn(t)} [16,17].

The inner product describes an operation of comparing thesimilarity between the signal and the template function, i.e. the degree of closeness between the two functions. This isrealized by observing the similarities between the wavelet transform and othercommonly used techniques, in terms of the choice of thetemplate functions. Anonstationarysignal is shown in Figure1 as an example. The signal consists of four groupsof impulsive signal trains. In these groups, the signals are composed of two major frequencies, 650 and 1500 Hz. 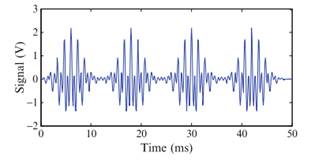 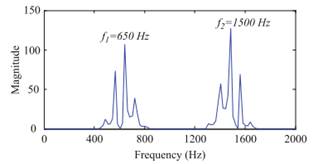 Fig. 1. An example for a non stationary signal. The signal consists of four groups of impulsive signal trains.

Using the notation of inner product, the Fourier transform of a signal can beexpressed as

Assuming that the signal has finite energy

Short time Fourier transformation ( STFT) can be expressed as

According to the uncertainty principle, the time and frequency resolutions of the STFT techniquecannot be chosen arbitrarily at the same time[18].

Wavelet transform can be expressed as

The definition of continuous wavelet transform

where a shifts time, b modulates the width (not frequency), and

Suppose that the continuous wavelet transform of x(t) is

suppose that the continuous wavelet transform of x(t) is

, then the continuous wavelet transform ofx(t/a) can be expressed as

This indicates that, when a signal is dilated by a, its correspondingwavelet coefficients are also dilated by a along the scale and time axes. 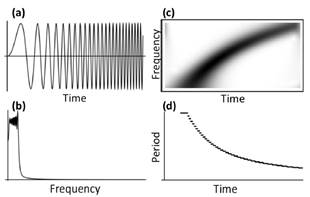 Electrocardiography (ECG) is a transthoracic interpretation of the electrical activity of the heart over a period of time, as detected by electrodes attached to the outer surface of the skin and recorded by a device external to the body. In short, electrocardiogram is a test that records the electrical activity of the heart. ECG has been used to measure the rate and regularity of heartbeats as well as the size and position of the chambers, the presence of any damage to the heart, and the effects of drugs or devices used to regulate the heart, as shown in Figure 4 and 5.

Fig. 4. Using ECG to measure the rate and regularity of heartbeats as well as the size and position of the chambers.

Fig. 5. Spectra of ECG in measuring the rate and regularity of heartbeats.

A typical ECG tracing of the cardiac cycle consists of a P wave, a QRS wave, a T wave, and a U wave. The baseline voltage of the electrocardiogram is known as theisoelectric line. Typically the isoelectric line is measured as the portion of the tracing following the T wave and preceding the next P wave, as shown in Figure 6 and Table 1. 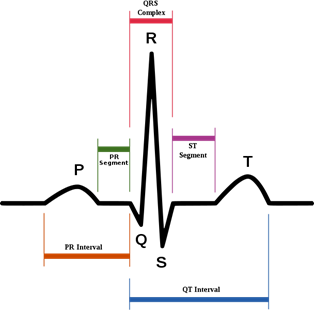 Fig. 6. Prtion of the tracing following the T wave and preceding the next P wave. 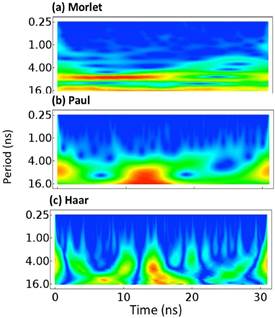 Fig. 7. Plots of the wavelet analyses of the Cα atom of R29 of the engrailed homeodomain (EnHd, PDB: 1enh). The absolute value of each wavelet coordinate is shown with low values illustrated in blue. No scale is given because wavelet values are in arbitrary units. (a) The Morlet wavelet. (b) The Paul wavelet. (c) The Haar wavelet. The scales of each are not identical as they are not directly comparable.

Table 1. Description the portion of the tracing following the T wave and preceding the next P wave.

One of the most important things for the medical images are image compression and image denoising which could be proceed on the following two flowcharts.

This method was developed by StephaneMallat[19,20]. Its principle is based on finding local maxima of wavelet coefficients (Wavelet Transform Modulus Maxima Method), which represent the edges in the image. The method uses only horizontal and vertical coefficients values (LowHigh and High Low coefficients 1) from each level of wavelet decomposition.

Wavelet transform modulus is defined by the equation[21-23]

for each pair of horizontal and vertical coefficients

At the same position in matrices.A matrix of the gradient angles for the same pairs of coefficients is evaluated according to the equation

Points in the original image for which values of M f(u, v, 2j ) are local maxima in one-dimensional neighborhood in the direction of gradient are supposed to be edge pixels. Thesepoints are distributed according the boundary of important structures in the image. To recoveredges, found individual maxima are chained.

Fig. 11. Diagram of the wavelet reconstruction of the original signal from thedetail (cD) and approximation (cA) coefficients.

Wavelet reconstruction can be used on multi-level transformed signals also toreconstruct the detail each level of the decomposition. Figure 12 is an example thatshows the reconstructed detail of a signal at six different scales. Remember thatthe detail represents the fluctuation in the signal from the average of the signal.With each pass of the wavelet transform (moving downward in Fig. 12) we arelooking at coarser fluctuations corresponding to larger scale regions of the signal. Inthis project we use functions that are part of the Matlab Wavelet Toolbox for bothdecomposition and reconstruction. 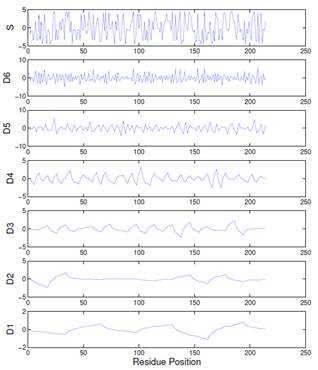 Wavelet analysis is a powerful tool that can be used to quickly and automatically isolate distinct motions of interest in a protein simulation. Due to their ability to locate subtle changes without being overwhelmed by larger more obvious motions, wavelets represent an ideal method for screening simulations to quickly pinpoint changes or structural rearrangements and for comparing differences in simulations, due to mutation, pH, or temperature changes, for example. Additionally, wavelets can be used to scan large databases of simulations for biochemically relevant events, such as the motion of a catalytic site or of functionally relevant loops.

This work describes how the mathematical formulas come out, what properties they have, and how to select optimal wavelets for biomedical signal processing, we can gain help from the brief categories and descriptions. Electrocardiography, Edge detection in medical images and Wavelet Reconstruction as an application has been studied and explained.