Determination of Absorption and Fluorescence Spectrum of Iraqi Crude Oil

Abstract: The fluorescence spectroscopy (FS) is increasingly used in petroleum technology due the availability of better optical detection techniques, because FS offers high sensitivity, good diagnostic potential, and relatively simple instrumentation. Absorption and fluorescence spectrum of crude oil was studied at room temperature using optical path cuvette 1 cm. In this work, the absorption spectra were scanned (190-1100) nm while the emission spectra were obtained at different excitation wavelengths (266, 337, 420, and 488) nm. Crude oil was diluted by absolute ethanol to prepare different concentrations of crude oil. Ethanol as a solvent was used to dilute crude oil to obtain a solution transparent and the light could be transmitted. This work considers as an additional spectroscopic tool to develop into a fast responsive system for charchtrize the crude oil.

Crude oil is a simply unprocessed oil found deep beneath the earth’s surface. It can range in color from clear to black and can be found as a liquid or solid. Overall properties of crude oil are dependent upon their chemical composition and structure. Generally, all crude oil is made up of hydrocarbon compounds. The main hydrocarbons in crude oil are aliphatic, aromatic, and asphaltenic compounds [1].

Methods of optical absorption spectroscopy are increasingly being used for the analysis of crude oil because they offer high speed, low cost, non-contact, non-destructive testing options, desirable for environmental protection, and process control, or oil exploration purposes. The absorption behavior of crude oil strongly depends on the wavelength range employed. In particular, UV-Vis absorption of crude oils is due to the presence of a wide range of cyclic aromatic compounds, including asphaltenes, with the intensity and the spectral properties of this absorption being directly related to chemical composition [2].

Fluorescence has been extensively used in the petroleum industry for analysis and classification of different crude oil samples. This field attempt to connect typical fluorescence parameters (intensity, emission wavelength, and lifetime) to physical characteristics of the crude oil such as chemical composition and density (API gravity) [3]. Stelmaszewski [4, 5] study the identification of oil by fluorescence method. Also, he studied the application of fluorescence in detection of petroleum pollutants, determination of oil in water concentration, determination of particular polycyclic aromatic compounds, and identification of oil contaminants. Ryder used steady state and time resolved fluorescence method to study emission spectrum of petroleum [6]. Steffens studied the fluorescence characteristics of solutions containing fixed amount of Nujol pure oil and different concentrations of Brazilian crude oil [7]. Evdokimov and Losev, analyze a possibility of UVVA characterization for fingerprinting of various types of crude oils and describe some effects of crude oil dilution on optical absorbance [8]. Goncalves emploied absorption and fluorescence techniques to study aggregation process in asphaltenes solutions [9].

Ethanol C2H5OH, (also called ethyl alcohol), is a volatile, colorless liquid. Nearly all the ethanol used industrially is a mixture of 95% ethanol and 5% water, which is known simply as 95% alcohol. Although pure ethyl alcohol (known as absolute alcohol) is available, it is much more expensive and is used only when definitely required [10]. When crude oil and ethanol mixed under vigorous shacking, ethanol extract hydrocarbons from crud oil while the heavy components remain at the bottom.

In this work, absorption and fluorescence spectra at different excitation wavelengths of different concentrations of Al- Nassiiya crude oil were mesared and identified.

The crude oil samples were obtained from Al- Nassiriya Oil Field to perform fluorescence and absorption measurements. It was necessary to extract crude oil to obtain a transparent solution to the incident light and for this reason ethanol was chosen as a solvent. Five crude oil samples were diluted with ethanol for the measurements, the different dilution are shown inTable 1. The chemical analysis of Al-Nassiriya oil was carried out by Oil Research and Development Center/Ministry of Oil in Iraq; the most salient data is shown in Table 2.

UV-Vis double beam PC scanning spectrophotometer was used for all absorbance measurements. All measurements were made at room temperature. Samples were analyzed in reduced volume by using 1 cm (1.5 mL total) quartz cuvette with ethanol blank in the reference position.

Varian Cary Eclipse fluorescence spectrophotometer was used for emission measurements. Fluorescence is measured using an excitation source placed at 90o to the detector. Excitation radiation is provided by a Xenon flash lamp. The Xenon flash lamp flashes up to 80 times per second and has a pulse width of approximately 2 to 3 microseconds. This light is then focused through a lens onto the excitation entry slit, then passes through an excitation monochrometer and into the sample. The resulting fluorescence passes through an emission monochrometer and is detected by a photomultiplier. 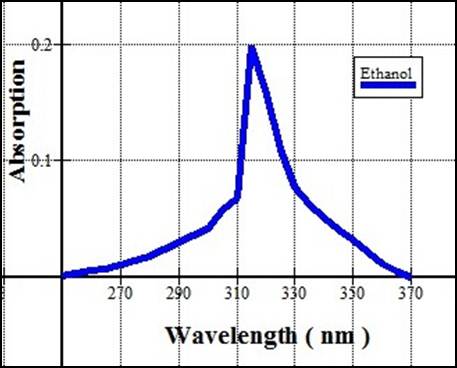 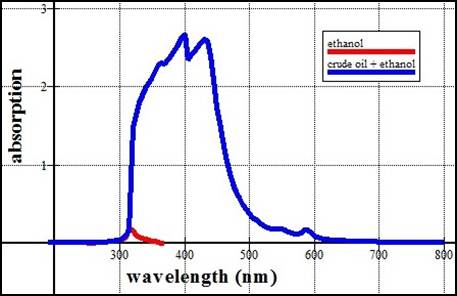 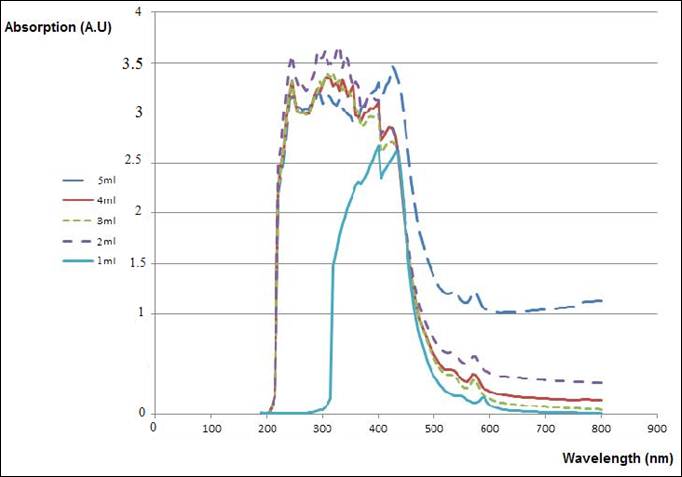 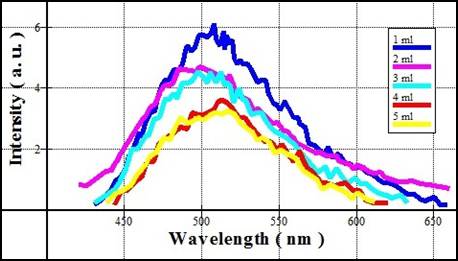 In contrast to absorbance study, the increase in oil concentration show a decrease in the emission intensity due to decreasing in the light penetration.

Fig. 5 shows the fluorescence spectra of diluted oil excited at 337 nm. In this case the emission band around 515 nm can be observed. A blue shift of 10 nm was occurred at concentration < 37.5% comparing to figure 1. This could be related to the effect of polar solvent (ethanol). 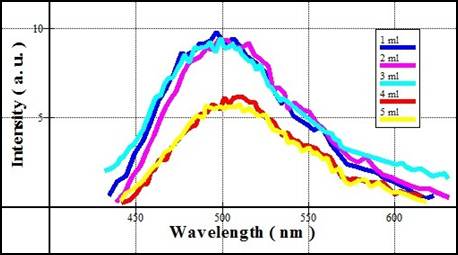 Figures 6 and 7 show fluorescence spectra of diluted oil excited at 420 and 488 nm respectively, flourecence spectra appear around 480 and 525 nm respectively, which decrease with the increase in oil concentration. In figure 6, a blue shift of 25 nm was occurred compare to figure 4 and 5. This is in contrast of other researcher [10, 11]. On other hand, figure 7 shows a red shift of 10 nm was appeared when the oil excited at 488 nm compared to 337 and 226 nm. 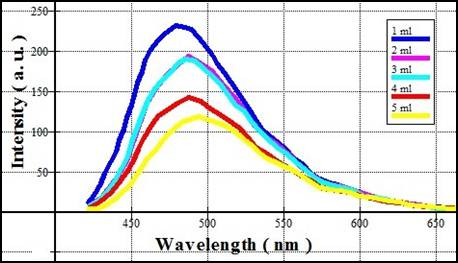 Fig. 6. Fluorescence spectra of the samples excited at 420 nm. 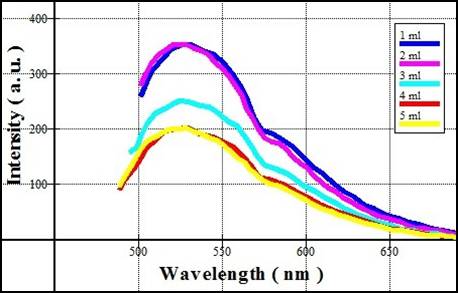 Fig. 7. Fluorescence spectra of the samples excited at 488 nm. 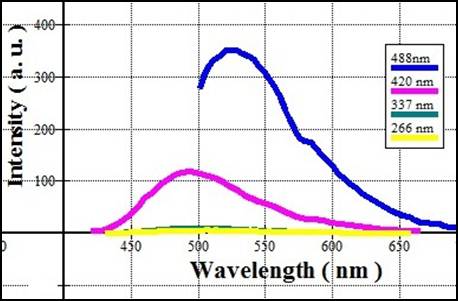 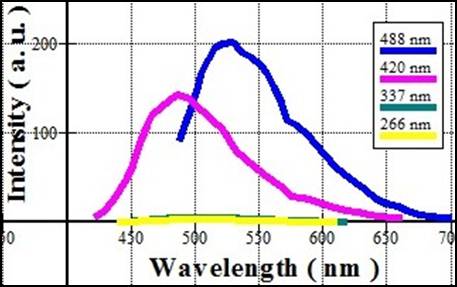 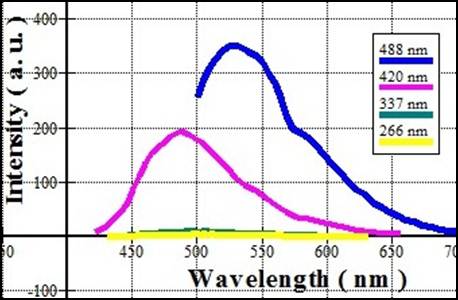 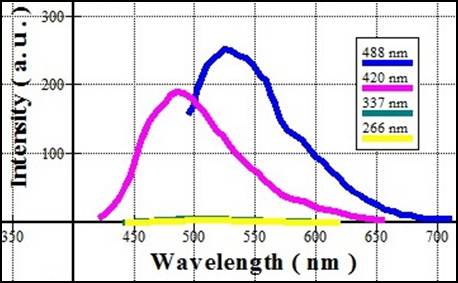 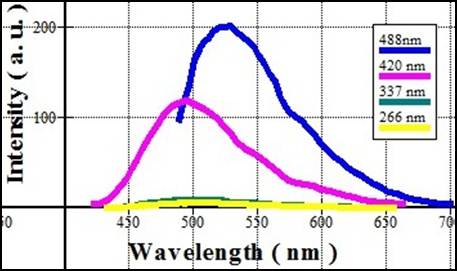 Absorption and fluorescence characteristics of crude oil were studied, ethanol was used to extract and dilut the crude oil for light penetration. Absorption spectra of crude oil are occurred between 320 to 465 nm at different concentration of oil.

We acknowledge Dr. Faleh Abed Hassan and Mr. Amer for their help in preparing the extracted oil, and our thank also goes to Dr. Azhar A. Kamel for her very careful review of our paper (all of them at Ministry of Science and Technology, Materials Research Directorate, Baghdad, Iraq).