Abstract: In this work, we are presenting the results of radium concentration, surface and mass radon exhalation rates for a number of 209 soil samples collected from different locations of Kassala town, Sudan, by using the can technique, containing CR-39. The values of radium concentrations from soil samples were found to be ranging from 3.9 to 34.2 Bq.kg-1, with an average of 16.3 ± 1.6 Bq.kg-1. The surface and mass exhalation rates of radon were found to be from 0.84 to 7.35 Bq.m-2.h-1 and 17 to 148 mBq.kg-1.h-1, with an averages of 3.50 ± 0.35 Bq.m-2.h-1 and 70 ± 7 mBq.kg-1.h-1, respectively for the studied soil samples. From the results of this study we found that, there was a good correlation between radium concentration and radon exhalation rates in soil samples. The values of radium concentration determined in soil samples are less than the permissible value of 370 Bq.kg-1 recommended by Organization for Economic Cooperation and Developments, which is acceptable for safe use. Thus, results reveal that the area is safe as far the health hazard effects are concerned. Finally we compare our results with similar findings in different regions of Sudan and among other Countries.

Radon, a gaseous product of uranium decay series, is odorless, colorless and tasteless. However, it can change the physical properties of the surrounding medium. Its half-life allows it to migrate long enough to travel long distances and accumulate indoors. The inhalation of radon and its daughter products can cause a significant health hazard when present in enhanced levels in the enclosed indoor environments like a human dwelling [1-6]. The radon concentration in the ground depends on the radium content of the soil and the emanation power of soils and rocks [7,8].

Radium is a solid radioactive element under ordinary conditions of temperature and pressure. Radium is a decay product of uranium in the naturally occurring uranium series. The rate at which radon escapes from soil into the surrounding air is known as radon exhalation rate of the soil. This may be measured by either per unit area or per unit mass of the soil. The measurement of radon exhalation rate in soil and building materials is helpful to study radon health hazard [9,10]. It was recorded that radon exhalation rate studies are important for understanding the relative contribution of the material to the total radon concentration found inside the dwellings [11,12].

Among many factors affecting radon exhalation, one of the most important is radium content of the bedrock or soil [13]. Being aware of the hazardous effects of radon exhalation on human health, it was necessary to conduct measurements of radium content in the soil. Higher values of radium in soil contribute significantly in the enhancement of environmental radon [14].

However, radon exposure shows an extreme variation from location to location and depends primarily on the exhalation rate of radon from the soil [15].

Since radium present in the soil is the main source of indoor radon, the estimation of radium content along with the radon exhalation rate in the soil was carried out.

This study was undertaken for the purpose of estimating the radium concentration and radon exhalation measurements in soil samples from Kassala town in the eastern part of Sudan, by using can technique containing SSNTDs of type CR-39.

1.2. Description of the Study Area

Kassala town which includes the area under study is the capital of Kassala State. It is located in the eastern part of Sudan, very closed to Ariterian boarder see Fig. 1. The town is located at latitude of 15°27'N and longitude 36°24'E and at a distance of 625 km from Khartoum. The Gash seasonal river, divides the town into tow semi equal parts eastern and western residential areas. The eastern extent of the town is bounded by two north south oriented inselbergs of which Jebel Kassala (Kassala granitic hills). The soils are moderately well drained, slowly permeable. 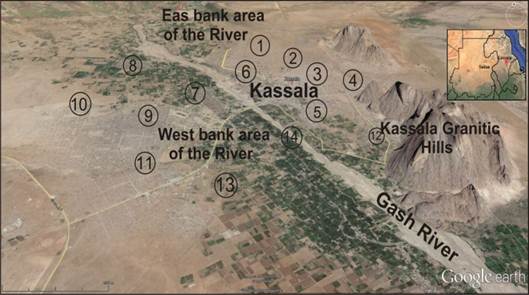 Figure 1. The locations of soil samples in the study area at Kassala town, Sudan. 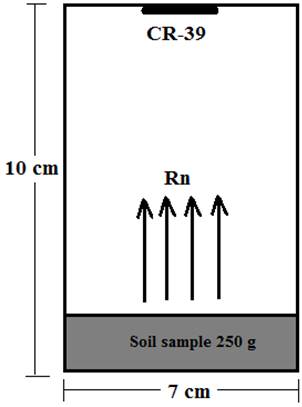 Figure 2. The passive diffusion radon dosimeter used in the study.

An amount of 6 kilograms from each sample was collected under the depth of 30 cm within 1.5 m of the foundations of the dwelling in selected locations, the samples were dried in a temperature controlled furnace (oven) at a temperature degree of 100 ± 0.1°C for 24 h to ensure that moisture is completely removed, then the samples were crushed to a fine powder and sieved through a small mesh size to remove the larger grains size and render them more homogenous. About 250 g of each sample was placed in a plastic can of dimensions of 10 cm in height and 7.0 cm in diameter [9,10,24,29].

A piece of CR-39 detector of size 2×2 cm was fixed on the top of inner surface of the can, in such a way, that it is sensitive surface always facing the sample, see Fig. 2.

The can is sealed air tight with adhesive tape and kept for exposure of about three months. During exposure period, the detector is exposed freely to the emergent radon from the sample in the can so that it could record alpha particles resulting from the decay of radon in the remaining volume of the can. After that, the dosimeters were separated from the sample cup, collected and chemically etched in a 30% solution of KOH, at 700 ± 0.10°C for a period of 9 hours. The resulting a tracks were counted under an optical microscope of magnification 400X.

The radium concentration in soil was calculated using the relation: [9,30-32]:

Where: CRadium is the effective radium content of soil sample (Bq·kg–1), r is the track density (tracks per cm2), A is the surface area from which radon is exhaled (m2) and M is the mass of the sample (kg), h is the distance between the detector and the top of the soil sample (m), K is the calibration constant which was determined previously to be: K=3.746×10-3 tracks.cm-2.h-1per Bq.m-3 [9, 15], Te is the effective exposure time, which is related to the actual exposure time T by the relation [15].

In order to measure radon concentration and its exhalation rate, using the sealed can technique, the radon exhalation rate in terms of area EA (Bq.m-2.h-1) is calculated by using Equation 3, as: [9,31]:

Where: V is the hollow holder volume (m3), l is the radon decay constant (h-1), C is the integrated radon exposure as measured by CR-39 plastic track detector (Bq.m-3.h).

In this work, the values of radium concentration and radon surface and mass exhalation rates are determined in a number of 209 soil samples collected from different locations of Kassala town in Sudan.

Fig. 3 presents the radium concentration with respect to the sampling locations inside the town. The higher recorded values for radium concentration, surface and mass exhalation rates throughout the studied locations in Kassala town were found in location 12 (Alkhatmia), this may be due to that, this area is located along Al-Gash river bank very close to granitic formations of Kassala mountains (Kassala granitic hills) hence its soil is classified as being belonged to river terrace soils, in addition, granites are known to contain high uranium content and thus the originated soils. Beside that the soils of this area are noticed to be containing a large amounts of suspended material (sedimentary deposits) that, re-sediments as silt clay, sandy clay, and sand and gravel [22,33].

The minimum value of radium concentration, surface and mass exhalation rates were recorded in location 11 (The popular market), this may be attributed to that the soil of this region is noticed to be as an agricultural soil with some grasses and trees, the soil is also classified as sandy soil, this may minimize the concentration values [9,22].

Having close observation at Table 2 which compares values from different regions in Sudan and other Countries, the average values of radium concentration and radon exhalation rates (surface and mass) obtained here is lower than that reported from Saudi Arabia [7], Singa and Rabak towns, Sudan [15], Ethiopia [34], higher than the recorded values for Bulandshahr district, Uttar Pradesh-India [35], Egyp [36], Karbi Anglong district of Assam-India [37] and nearer to the values reported from India [38].

The observed values of radium concentration in soil samples in the present study are less than the recommended action level 370 Bq.kg-1 OECD, 1979 [39]. Report by a group of experts of the OECD Nuclear Energy Agency OECD Paris, France, and also lower than the average global value of 30 Bq.kg-1 [40]. The soil of the study area is advisable to use in brick manufacturing for building construction.

Figs. 4 and 5. representing the surface and mass exhalation rates of radon gas from soil samples vs. radium concentration for Kassala town. 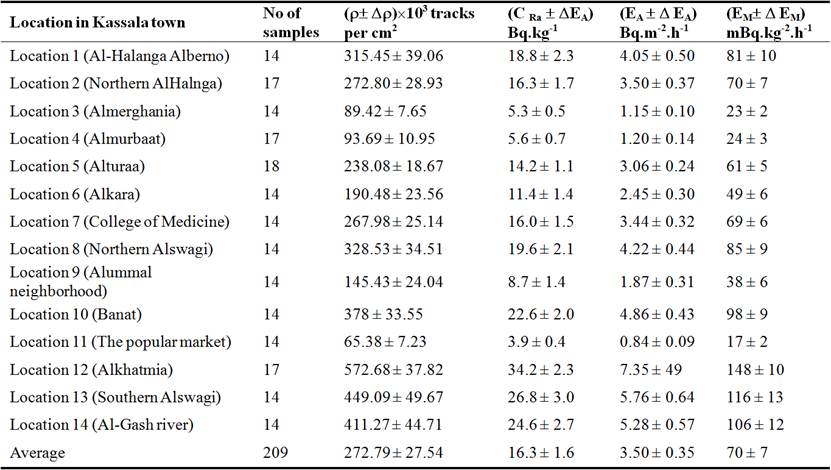 Figure 3. Radium concentration with respect to the study area at Kassala town. 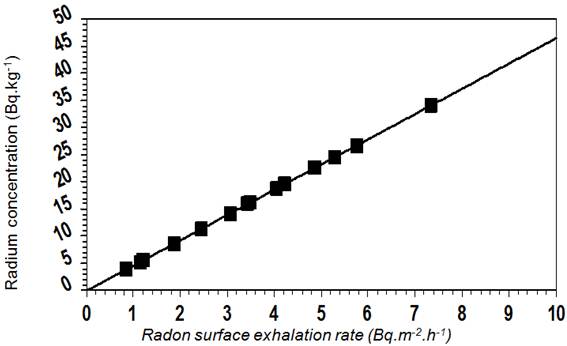 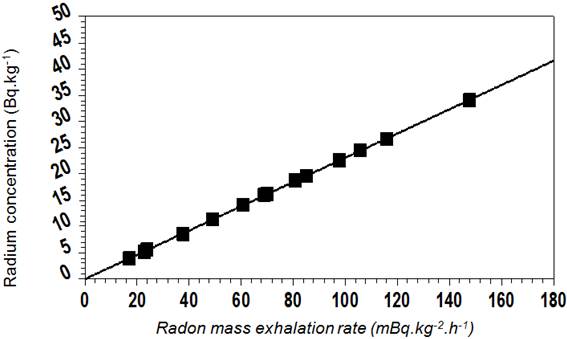 Table 2. Values of concentration and exhalation rates of radon and radium concentration in different countries as compared with our study.

The can technique containing CR-39 plastic track detectors have been used for the measurement of radium concentration, surface and mass radon exhalation rates in soil samples collected from various locations from Kassala town in Sudan. Radium concentration in soil samples varies from 3.9 to 34.2 Bq.kg-1, with an average of 16.3 ± 1.6 Bq.kg-1 for the various locations in the town. The surface and mass exhalation rates of radon from these samples has been found to vary from 0.84 to 7.35 Bq.m-2.h-1 and 17 to 148 mBq.kg-1.h-1, with an averages of 3.50 ± 0.35 Bq.m-2.h-1 and 70 ± 7 mBq.kg-1.h-1, respectively for the studied soil samples. The values of radium concentration obtained from the study are found to be linearly dependent with exhalation rates. The measured values were compared with others all over the world.

The authors would like to express thanks to the residents of the study areas for their cooperation during the fieldwork. The authors are thankful to Kassala University for support and cooperation in this study.