Abstract: This paper presents the environmental effects of gas flaring on pHvalues of the soil and rain water in some areas in Niger Delta. Different soil samples and rain water at various proximities from the gas flaring locations were taken. The samples collected were evaluated to determine thepHvalues of rain-water and that of the soil in the area under investigation. The result obtained shows a remarkable trend as the values of the pHof the soil and that of the rain waterincreased as we moved away from the gas flaringstations. The pHactually changed from extreme acidic (3.5 - 4.4) to moderate alkaline (7.9 - 8.4)as we moved away from the flaring points. The pH values tend to normalize at distances of more than 2 km away from most of the gas flaring points. The lowpH values imply that there is formation of acidrain which has dangerous consequences on the environment and on the plants and animals. The resultant health implications of extreme acidity in the rain water and consequently in the soil was also discussed.

Gas flaring is the burning off of gas into the atmosphere. The gas that would have been otherwise used for useful purposes is wasted by burning. Natural gas is a subcategory of petroleum that is naturally occurring. It is a complex mixture of hydrocarbons with a minor amount of non-hydrocarbon gases [11]. The discovery and extraction of natural resources have brought different consequences to the countries that are endowed with such resources. [1]; [8]. In Nigeria, the discovering of crude oil was in 1958, while the extraction and gas flaring activities of these natural resource started since 196 [13]; [9]. The burning off of gas became illegal since 1984 and the Nigerian government has set up several deadlines to end the practice, but gas flaring continues till date [4]; [10].

According to World Bank records, Nigeria is among the highest gas flaring countries in the world, see fig. 1 below:

[7]; [10]pointed out that gas flaring is a major source of climate change which is creating increased uncertainty about the future temperature and precipitation in our environment. The smoke that comes from the gas flares contains sooty grey particles, and many invisible gases that can be very harmful to our environment. The flares from Nigeria alone have contributed large volumes of green house gases than any other Country in Africa. The flares have also released several dangerous toxins into the atmosphere, polluting the soil, atmosphere, water and the entire environment. Consequently, the health and well being of the nearby NigerDelta communities are adversely affected, exposing the residents to an increased risk of premature death, respiratory illnesses such as Asthora and cancers [5]; [6]. Gas flaring is the singular and most common source of global warming and contributes to emissions of carbon monoxide, nitrogen (II) oxide and methane which causes environmental pollution and ecological disturbances or destruction [1]; [2].

Acid rainrefers to a mixture of deposited materials, both wet and dry, coming from the atmosphere containing more than normal amounts of nitric and sulfuric acids. In other word, Acid rain is a rain or any other form of precipitation that is unusually acidic, meaning that it possesses elevated levels of hydrogen ions (low Ph). It can have harmful effects on plants, aquatic animals and infrastructure. Acid rain is caused by emissions of sulfur dioxide and nitrogen oxide, which react with the water molecules in the atmosphere to produce acids. Acidity is measured using a scale called the Ph scale. The pH scale ranges from 0 to 14. A pH value of 7 is neutral, a pH less than 7 is acidic while a pH greater than 7 is basic [3]. The classification of pH values is given in the table 1.

Research has shown that Soils tend to become acidic as a result of: (1) rainwater leaching away basic ions (calcium, magnesium, potassium and sodium); (2) carbon dioxide from decomposing organic matter dissolving in soil water to form a weak organic acid; (3) formation of strong organic and inorganic acids, such as nitric and sulfuric acid, from decaying organic matter and oxidation of ammonium and sulfur fertilizers. Strongly acid soils are usually the result of the action of these strong organic and inorganic acids.

The classification of soil pH values is given in the table 1.

Lime is usually added to acid soils to increase soil pH. The addition of lime not only replaces hydrogen ions and raises soil pH, thereby eliminating most major problems associated with acid soils but it also provides two nutrients, calcium and magnesium to the soil. The addition of lime also makes phosphorus that is added to the soil readily available for plant growth and increases the availability of nitrogen. The increased amount of nitrogen hastens the decomposition of organic matter. Liming materials are relatively inexpensive, comparatively mild to handle and leave no objectionable residues in the soil. Some common liming materials are: (1) Calcic limestone which is ground limestone; (2) Dolomitic limestone from ground limestone high in magnesium; and (3) Miscellaneous sources such as wood ashes. The amount of lime to apply to correct a soil acidity problem is influenced by a number of factors, including soil pH, soil texture (amount of sand, silt and clay), structure, and amount of organic matter. In addition to the soil variables the crops or plants to be grown influence the amount of lime needed.

pH is of major importance in determining the corrosivity of water. In general, the lower the pH, the higher the level of corrosion. However, pH is only one of the various factors affecting corrosion. Exposure to extreme pH values results in irritation to the eyes, skin, and mucous membranes. In sensitive individuals, gastrointestinal irritation may also occur. Redness and irritation of the eyes have been reported at pH values lower than 4. The severity of the redness of the eyes increases with decreasing pH. Damage to the epithelium is irreversible and extensive at pH below 2.5. In addition, pH can affect the degree of corrosion of metals as well as disinfection efficiency [3].

Visitations to the major communities in Rivers state that flare gas was done severally to ascertain any existence of common environmental hazards. Data was gathered from Different samples at various proximities from the gas flare locations. The research was done in MbodoAluu, Ogba-Egbema-Ndomi, Eneka, Obio-Akpor and Omoku Communities in Rivers State, Nigeria. At each location, the soil pHand the pH of rain water was determined

Clean acid-free glass bottles were used to collect samples of rain water that had fallen during the preceding week. The samples were placed at distances of 200m, 400m, 600m 800m, 1000m, 1200m, 1400m, 1600m, 1800m and 2000m from the flare point. The funnel was covered with a plastic net to prevent the collection of windblown debris. Each bottle was placed on a stand 1.5m above ground level. The collected samples were analyzed to determine the pH value of the collected water.

The data collected is tabulated as shown in the tables below. 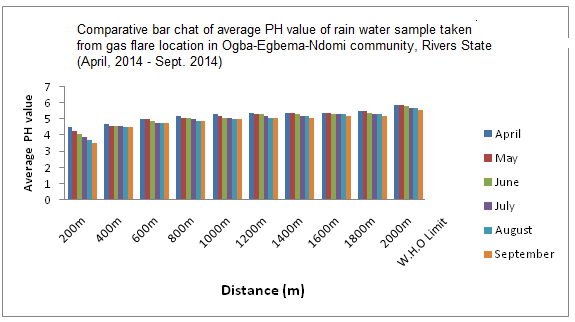 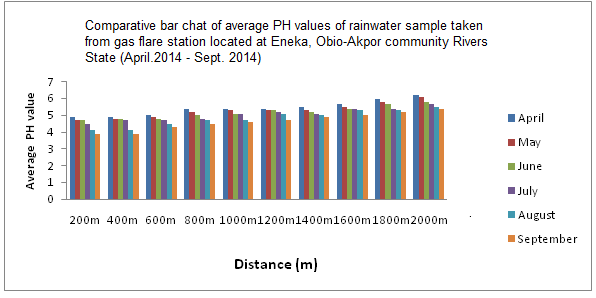 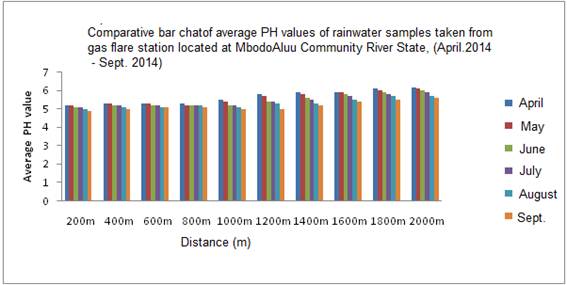 The pH of the various soil samples taken from the same gas flare stations were determined from supernatant obtained from the mixture of the soil samples with sterile distilled de-ionized water. The samples were placed at distances of 200m, 400m, 600m 800m, 1000m, 1200m, 1400m, 1600m, 1800m and 2000mfrom the flare point. The pH was determined using a PYE UNICAM model 291mkz pH meter with a combined glass electrode. The result is as presented below. 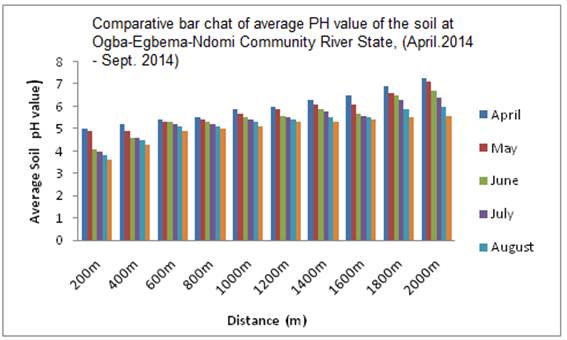 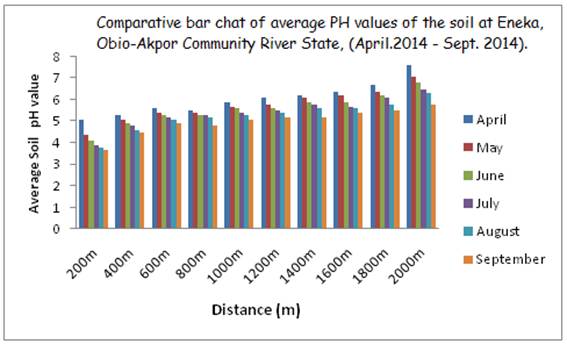 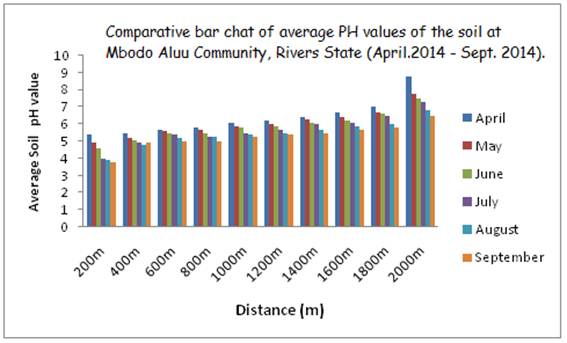 The result shows that the soil and rain water were acidic at distances close to the gas flaring stations. The level of acidity decreased as we moved away from the flaring stations. The rate of decrease of acidity deferred from one station to another. The low pH values recorded at distances close to the flare stations could be attributed to the acidic oxides produced by the flared gas. The acid rain produced by gas can cause damage to fish and other aquatic animals. Most fish eggs will not harsh at pH values lower than 5. Furthermore, some adult fish cannot survive at PH values lower than 5. The biodiversity is adversely affected as lakes and rivers become more acidic. The normal value of rain water is considered to be 5.6, below which the rain water is said to be acidic. It can therefore be seen that most parts of the area under investigation actually experienced acid rain and the soil was also acidic. This partly explains the prevalence of water borne diseases and the massive destruction of aquatic life recorded in these communities. However, on a few occasions, pH values were greater than 5.6 for rainwater samples collected from some locations. Some of the general effects of the gas flaring at Ogba-Egbema-Ndomi, Eneka, Obio-Akporand Omokuincludes, stunted growth and red leaves observed in the cassava, plantain, palm trees, yams and other crops that were planted close to the flaring stations. It was also observed that, majority of the inhabitants who are farmers in Ogba-Egbema-Ndomi, Eneka, Obio-Akpor and Omoku Communities always migrate to communities that do not flare gas for settlement in order to meet up with their farming profession.

The result obtained in this work shows that the PH value for rain water and the soil PH decreased as we moved away from all the gas flaring stations. The pH values actually changed from extreme acid (3.5 - 4.4) to moderate alkaline (7.9 - 8.4) as we movedaway from the gas flaring points. This is expected because of the reaction which takes place in the atmosphere when carbon dioxide (CO2) and carbon mono oxide (CO)and other dangerous gases are released into the atmosphere. The result of this is the formation of acid rain which has dangerous consequences on the environment and on the plants and animals, with the resultant health implications.