Abstract: The decay rates of

One of the successful models in particle phenomenology is the quark model which is applied to calculate the decays of various particles with a few differences. The particles called kaons, or K mesons, were first observed in the late 1940s in cosmic-ray experiments. By today’s standards, they are common, easily produced, and well understood. Over the last four decades research into how kaons decay has played a major role in the development of the Standard Model. Yet, after all this time, kaon decays may still prove to be a valuable source of new information on some of the remaining fundamental questions in particle physics.

When first observed, kaons seemed quite mysterious. Experiments showed that they were produced in reactions involving the strong force, or strong interaction—the most powerful of the four fundamental forces in nature—but that they did not decay (that is, transform into two or more less massive particles) through the strong interaction. This is because kaons have a property, ultimately labeled "strangeness," which is conserved in the strong interaction [10].

One of the most interesting and unique observed particles in the nature is kaon. There are two neutral kaons which are, in fact, strange mesons.

is the Eigenvalue of the strange state. Since each kaon under CP effect turns into another kaon, neither of these kaons have determined CP number.

are not eigenstate of CP. However, when CP acts on them, they are conjugate of each other.

.According to Quantum Mechanics rules, these combinations corresponding with real particles and have a mass and determined lifetime. Therefore normalized eigenstate CP are [3, 9]:

just can decays to

state. Neutral kaons usually decay to two or three pions. Arrangement of two pions has +1 parity and three pions system has -1 parity and both of them have a

decays to two pions and

is the Fermi constant that in terms of the

boson mass is defined as follows:

are the local operators that decays discussed in turn controlled.

Wilson ‍Coefficients are described the force with which an operator enters the Hamiltonian. In fact, the effective point-like vertices are represented by local operators can correct picture of the decay of hadrons with a mass of the order of

a better way to provide.

The Wilson coefficients to be used as coupling constants (depending on scale) corresponding to the vertices are considered. Select the

scale is optional, but it is customary that to choice

the order of the mass of hadrons decay, eg for

mesons decays, the value of

are respectively the order of

. For kaon decays the common choice of

is the order of

In this paper, Wilson coefficients of

antiquark decays are calculated [2]. General framework of how to calculate Wilson coefficients is based on that (1-6) equation which has already been mentioned in the introduction. Effective Hamiltonian of the

transition is defined as follows [2].

is the Fermi constant and

is the local operator which controls the decay.

is defined as follows:

In the τ equation

matrix, since there are three generations of quarks, which Kobayashi and Maskawa in 1973 stated that the third generation of quarks to the matrix, mixed phases that, if not zero, it is symmetry breaking. If this phase is virtually zero, to explain the CP failure must seek something beyond the standard model.

Several methods have been proposed for

is the phase which is in the range of

. Matrix elements are calculated by using the following data [14]:

are defined as follows [2] 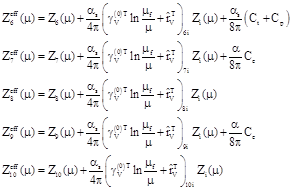 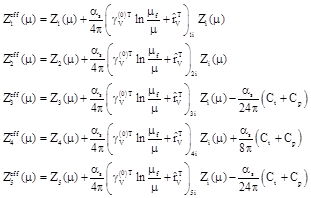 are obtained from correction of

operators’ vertex. Also, the values of

is parameter that in dimensional regulation, describes dependency

model. For example, in

we have Naïve Dimensional Regularization

in (2-6) equations is defined as follows:

is the square of the momentum carried by virtual gluons.

Matrix in (2-9) equations gives constant terms; they are independent of the momentum that is based on the

behavior in the dimensional regularization. For the kaon decays, there was no heavy quark mass scale between

form will be like (2-9) equation. We will assume that

as a reliable estimate obtained of destruction effects the effective Wilson coefficients. As a result, we have [2, 4]: 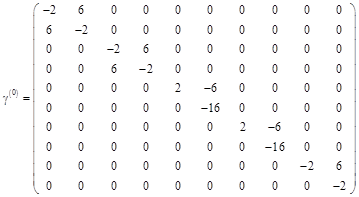 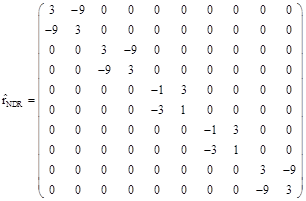 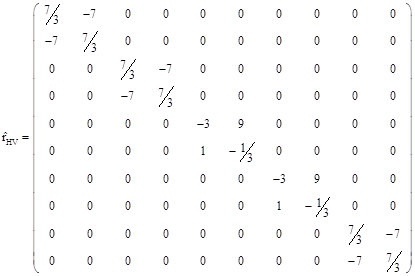 By using the effective Lagrangian density of the weak interaction, we can calculate decay rate in tree level. Furthermore, decay rates of S quark –anti quark can be calculated in tree and penguin level by the use of the effective Hamiltonian Theory. This is possible by the means of Effective Wilson coefficients.

In this paper, Effective Wilson coefficients are calculated. In table 1

values were calculated. Moreover, the numerical values of

are showed in the table 2 [5]. In conclusion, Table 3 shows calculated values for the effective Wilson coefficients for the decay of