Abstract: This paper investigates the electrochemical properties of CuFeO2 prepared by using a malate precursor method as negative electrodes for sodium-ion batteries. In the voltage range of 0.01 to 3.0 V, the oxide calcined at 750°C shows a poor cycle property of 27 mAh/g at 10 cycles, although it exhibits the large first discharge capacity of 579 mAh/g. The cycle property is improved to up to 122 mAh/g at 10 cycles by employing a cycle condition with the voltage range of 0.01 to 1.5 V. The results suggest that the sodium-ion insertion/extraction mechanism in CuFeO2 would involve valence changes of Fe ions in the oxide from the Fe3+ state to Fe0 state in the discharge process and from Fe0 to Fe3+ in the charge process.

Lithium-ion batteries (LIBs) are widely used in mobile phones and notebook computers owing to their high voltages and high energy density. Furthermore, the market demand for large-sized LIBs as the power supply for electric vehicle has been increasing in recent years. However, lithium is expensive because it is not an abundant metal. On the other hand, sodium is abundant and cheap [1], and interest in sodium-ion batteries (SIBs) has been growing. Therefore, materials that have been studied for use as negative electrodes for SIBs include hard carbon [2 - 5], tin [6 - 8] and tin-based materials [9 - 10]. Hard carbon can be cycled more than 100 times, but its capacity is only about 250 mAh/g [2]. On the other hand, the capacities of tin and tin-based materials are about 500 mAh/g [7], but their cycle performance is poor. In addition, some oxide materials, such as Na2Ti3O7 [11 - 12], Na4Ti5O12 [13], TiO2 [14 - 15], MoO3 [16], Fe3O4 and a-Fe2O3 [17], have been studied for use as SIBs’ negative electrodes. However, most of these materials show small capacity or poor cycle performance, which leads to insufficient battery performance. In addition, most of the oxide materials show high voltage, which is why their energy density are low.

CuFeO2 has a delafossite structure consisting of closely packed oxygen double layers, in which the octahedral sites are occupied by Fe3+ cations, and these double layers are linked by monovalent Cu+ ions with two-fold oxygen linear coordination [18]. CuFeO2 has been studied as a negative electrode material for LIBs [19 - 20], and it exhibited a 475 mAh/g beyond 100 cycles. As reported in ref. [19], the reversible capacity of Li/CuFeO2 cell is expected to correspond to 4 mol of Li per mole of CuFeO2, and the theoretical capacity is 694 mAh/g.

In this study, we investigated the electrochemical properties of CuFeO2 as negative electrodes for SIBs. We performed X-ray diffraction (XRD) measurements and X-ray photoelectron spectroscopy (XPS) measurements of electrodes containing CuFeO2 during cycling to examine the reaction mechanism involved in the crystallographic-structure changes in the oxide.

Working electrodes for electrochemical measurements were prepared by mixing CuFeO2 powder, acetylene black as a conductive material, polyvinylidene difluoride (PVdF) binder in N-methylpyrrolidone, coating the mixture slurry on an Al sheet as a current collector, and finally drying it at 90°C in an oven. The electrochemical performance was evaluated with a 2032 coin-type cell using a working electrode (0.02 mm thick and 14 mm in diameter), a non-aqueous electrolyte (1 mol/l NaPF6 / EC:DEC 1:1 in volume, Tomiyama Pure Chemicals Industries Ltd.), a polypropylene separator (Celgard, 19 mm in diameter), and sodium metal sheets (0.6 mm thick and 15 mm in diameter, Kanto Chemical Co.) as a counter electrode. All cells were assembled in an Ar-filled glove box (dew point < -75°C). Cycling tests were performed with an automatic galvanostatic discharge-charge system unit (Hokuto Denko Corp. HJ1001SD8) at a current density of 25 mA/g between 0.01 and 3.0 V(or 1.5 V) at 25°C. Then, the cells were opened after the charge/discharge process in the Ar-filled glove box, and the working electrodes were soaked in dimethyl carbonate (Tomiyama Pure Chemicals Industries Ltd.) and dried in the glove box overnight. XRD measurements of the electrodes with discharged or charged states were performed. Inductively coupled plasma spectroscopy (ICP, Hitachi High-Technologies Co., SPS1700) was used to evaluate the composition of the Nax-CuFeO2 in the electrodes before and after charge/discharge processes. The sample solution for the ICP-AES analysis was prepared as follows. Working electrodes were removed from discharged/charged coin cells and washed with dimethyl carbonate (DMC) in the glove box. Then electrode materials were dissolved in a dilute acid mixture consisting of nitrohydrochloric acid, perchloric acid, sulfuric acid, and nitrohydrochloric acid. An X-ray photoelectron spectrometer (XPS) analysis was performed with a PHI XPS-5700 system using AlKa radiation (1486.6 eV) to examine the binding energy for Fe2p of as-prepared, discharged, or charged electrodes. The binding energies for Fe2p were identified using the NIST database [21] 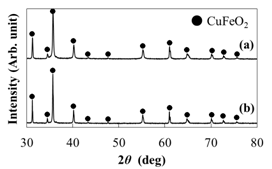 Figure 1 shows the powder XRD patterns of the sample obtained at 750 or 900°C for 10 h in Ar. The XRD patterns well agree with that of hexagonal CuFeO2 (PDF No. 00-039-0246). Furthermore, they are consistent with the pattern reported in the literature [19]. These results indicate that CuFeO2 was obtained as a single phase. Figure 2 shows SEM images of the CuFeO2 particles sintered at 750°C and 900°C. The oxide sintered at 750°C has the primary particle size of 0.3-0.5 mm. On the other hand, the oxide sintered at 900°C consist of primary particles of more than 1.0 mm, and the particles are aggregate by sintering at higher temperature. 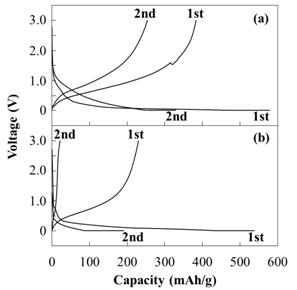 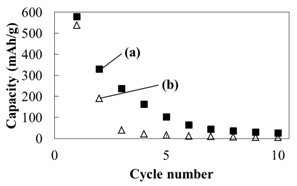 Figure 5 shows the XRD patterns of CuFeO2 obtained at 750°C during the first cycle in the voltage range of 0.01 to 3.0 V. After the first discharge (Na-ion insertion), the peaks corresponding to CuFeO2 almost completely disappeared as shown in Fig. 5(b). This result suggests that the CuFeO2 crystalline phase might become amorphous phase. Moreover, new peaks assigned to NaCuO (PDF No. 01-071-2300) and Fe3O4 (PDF No. 00-003-0862) were observed. After the first charge, there were small peaks of CuFeO2 and NaCuO peaks as shown in Fig. 5(c).

Table 1. Changes in sodium content, x, in Nax-CuFeO2 after the first dis-charge/charge process. 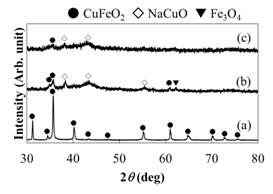 Figure 5. XRD patterns of (a) pristine CuFeO2 electrodes, (b) after discharge, and (c) after charge.

XPS measurements provide information to examine the reaction mechanism, and the binding energies for Fe2p were identified using the NIST database. Figure 6 (a) shows the wide–scan spectrum of pristine CuFeO2 electrodes. The Fe2p, Cu2p, O1s, F1s and C1s peaks are assigned as shown in Fig. 6(a). The typical narrow-scan spectra of Fe2p after discharge to 0.01 V and after charge to 3.0 V are shown in Fig. 6(b) for pristine electrodes. The Fe2p peak shifted toward lower binding energy from 711.2 (pristine, the Fe3+ state) to 710.5 eV (after discharge and after charge) as shown in Fig. 6(b). 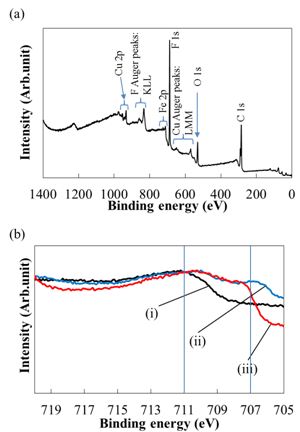 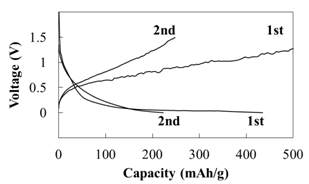 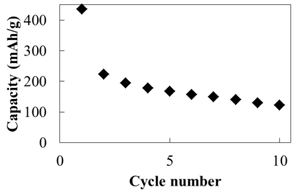 CuFeO2 powders were synthesized by using a malate precursor method. Their electrochemical properties as negative electrodes for SIBs were examined. The particle size of the oxide sintered at 750°C (0.3-0.5 mm) is smaller than the one sintered at 900°C (0.5-1.0 mm). The discharge capacity of the 750°C oxide (579 mAh/g) was larger than that of 900°C one (538 mAh/g) in the 0.01 to 3.0 V range. Na ions might easily insert into the bulk of the CuFeO2 obtained at 750°C because of the small particles, which would explain its large capacity. The cycle properties were poor (750°C: 27 mAh/g up to 10 cycles). The reasons for the poor cycle performance are changes in the bonding states of the atoms and changes in the crystal structure during cycling. In the narrow voltage range of 0.01 to 1.5V, the cycle property was improved from 27 to 122 mAh/g at 10 cycle.