Most of the elements occurred in nature as a mixture of isotopes. The relative abundances of isotopes is different at different places on the earth and remained constant for years. The distribution of contaminant sources of any molecule on a native or global scale can be understood by determining the isotopic abundance ratio [1]. Any kinetic process that leads to the local depletion or enhancement of isotopes in organic molecules can be successfully determined using gas chromatography-mass spectrometry (GC-MS) [2]. These deviations from perfect chemical equivalence are termed as isotope effects. The isotopic abundance ratio is commonly reported in terms of atom percent and determined by high resolution mass spectrometry (HRMS spectrometry) [3]. For example, 13C

Moreover, the rate of chemical reaction may vary with the mass of the nucleus with different isotopic substitutions, which slightly affect the partitioning of energy within the molecules [4].

The aminopyridines, selected for this study are heterocyclic pharmacophores for many bioactive small organic molecules [5]. The growing interest of these molecules pharmacologically due to its rare tendency to be oxidized like aniline derivatives [6]. Aminopyridines avoid such problems due to its reduced oxidation potential, thus make it a safer alternatives for drug design. Additionally, they are advantageous because they have exhibited strong absorption and emission spectra and thus useful as fluorescent tags while investigating the activities on a target [7].

Aminopyridines are used as a drug for symptomatic treatment of multiple sclerosis by blocking potassium channels and prolonging action potentials [8,9]. It has been used as intermediate for the synthesis of pharmaceutical agents such as piroxicam sulfapyridine, tenoxicam, and tripelennamine [6,10]. Besides, diaminopyridines are mostly used for synthesis of dyes, cosmetics, drugs and explosives [11,12]. It is also used as intermediate for the synthesis of epoxy curing agents, polyamides, and preparation of analgesic phenazo- pyridine hydrochloride [13]. Additionally both the aminopyridine derivatives were successfully utilized as organic fluorescence sensors for the detection of metal cation [14].

The isotopic abundances of ratios of 2H/1H, 13C/12C, or 15N/14N, could be locally altered by kinetically driven chemical reactions. There is an alternative and well-known approach, Mr. Trivedi’s biofield energy treatment also known as The Trivedi Effect®, that can be applied on aminopyridine derivatives to undergo the isotopic changes. The physicochemical properties of various molecules and crystals were already altered by utilizing Mr. Trivedi’s biofield energy treatment [15-17]. The National Center for Complementary and Alternative Medicine (NCCAM) has recommended the use of energy therapy as a part of Complementary and alternative medical therapies (CAM) in the healthcare sector [18]. CAM includes numerous energy-healing therapies, in which the biofield therapy is a form of putative energy therapy that is being widely used worldwide to improve the overall health of human beings. Humans have the ability to harness energy from the environment/universe that can be transmitted to any objects around.

Based on the previous results achieved by the biofield energy treatments by Mr. Trivedi in various fields, biofield energy treated 2-AP and 2,6-DAP were taken for mass spectroscopy studies to evaluate the isotopic abundance ratio of 2H/1H, 13C/12C, or 15N/14N (PM+1)/PM, [where PM is the primary molecule and (PM+1) is isotopic molecule].

Each of the 2-AP and 2,6-DAP sample was distributed into two parts, where one part was referred as control and the other part was considered as treated sample. The treated sample was further divided into four groups (i.e. T1, T2, T3, and T4) and handed over to Mr. Trivedi for biofield energy treatment under standard laboratory conditions. Mr. Trivedi provided the treatment through his energy transmission process to the treated groups without touching the sample. The control and treated samples were characterized using gas chromatography-mass spectrometry (GC-MS).

The gas chromatography-mass spectroscopy (GC-MS) analysis was performed on Perkin Elmer/auto system XL with Turbo mass, USA, having detection limit up to 1 picogram. The GC-MS spectra were obtained in the form of % abundance vs. mass to charge ratio (m/z). The isotopic abundance ratio (PM+1)/PM was expressed by its deviation in treated samples as compared to the control. The percentage change in isotopic ratio (PM+1)/PM was calculated from the following formula:

where, RTreated and RControl are the ratios of intensity at (PM+1) to PM in mass spectra of treated and control samples, respectively. 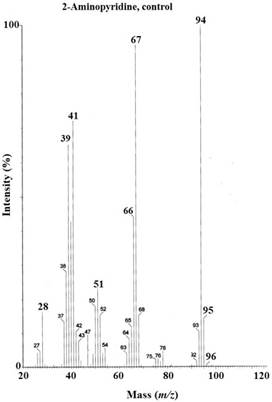 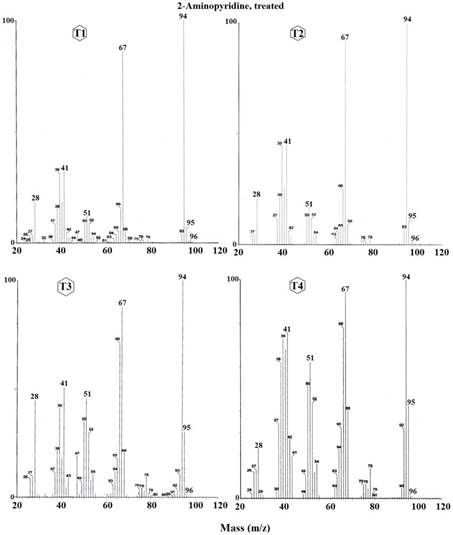 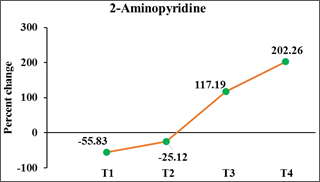 Figure 3. Percent change in the isotopic abundance (PM+1)/PM of 2-aminopyridine after biofield energy treatment as compared to the control. 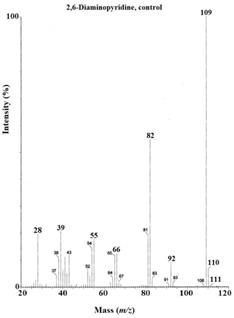 Effective mass of some probable isotopic bonds were calculated and presented in Table 3. The result showed that µ of normal 12C-12C (µ=6), and 1H-12C (µ=0.923) bonds were increased in case of heavier isotopes (i.e. 13C-12C=6.26, and2H-12C=1.71), respectively. After biofield treatment, bond strength, stability, and binding energy of the aromatic ring of 2-AP and 2,6-DAP molecules might be increased due to the higher effective mass (µ) after biofield energy treatment [22].

The decreased reactivity of the aminopyridine derivatives may increase the stability of the aminopyridine based products in pharmaceutical industry, by reducing the degradation kinetics in the finished products after production. Furthermore, the organic molecules used for fluorescence sensors are exposed to UV radiation continuously for a longer period of time. Photo stability is a great concern in order to use them successfully as sensors without degradation. After biofield treatment the stability may enhance due to the presence of higher isotopes an enable them to expose the materials under UV radiation for longer period [14]. 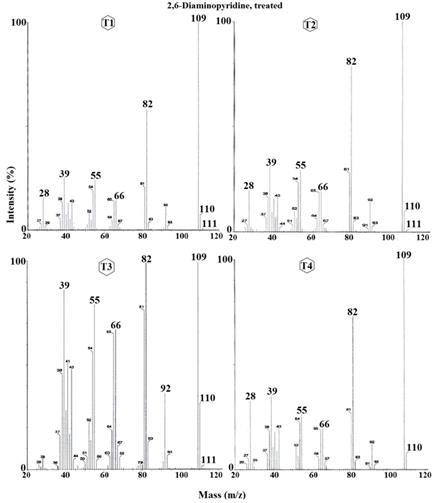 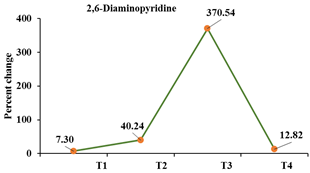 Figure 6. Percent change in the isotopic abundance of (PM+1)/PM of 2,6-diaminopyridine after biofield energy treatment as compared to the control.

In summary, aminopyridine derivatives, 2-AP and 2,6-DAP were studied with GC-MS under the influence of biofield energy treatment and observed a significant change in isotope abundance of 2H/1H, 13C/12C or 15N/14N as compared to the respective control samples. The percent change in isotope abundance ratio of (PM+1)/PM was increased upto 202.26% in 2-AP (T4), while the isotopic abundance ratio was increased significantly upto 370.54 in treated 2,6-DAP (T3) sample. The changes in isotopic abundance ratios have significant impact on bond energies and chemical reactivity of the molecules. Due to the enhancement in the isotopic abundance ratio of (PM+1)/PM in 2-AP and 2,6-DAP, the reactivity may be reduced significantly by increase in the effective mass (m) and the binding energy of the treated sample.It can be concluded from the above observations that the enhancement of heavier isotopes in the aromatic ring as well as the functional groups may decrease the reactivity of the aromatic ring and the functional groups of aminopyridine derivatives, consequently enabling their utility as pharmacophore in the pharmaceutical industry and as an active material in fluorescence sensors.