Abstract: Climate change overshadowing the globe is a vibrant phenomenon now days. Decades have passed since scientists from around the world started informing and forecasting the impact of this threatening climatic condition. It is not only disseminating the likely consequence, but also scientists have been battling to uphold safe environment for the next generation. Politicians have also been making climatic issue discussion on the top of their agenda on different world summit. As has been mentioned several times, this unfortunate environmental feature came in to being by human activity (directly or indirectly) and is believed to be reversed by same creature. This review is intended thinking that safe chemical process (from simple laboratory experiment to huge industrial process), reduced effluent to the environment and minimized cost to the process, which can be brought about by utilization of ionic liquids, could be one of the elements to retard and/or stop this catastrophe. In this regard, an attempt has been made to include the meaning, history, properties and different applications of ionic liquids, the green chemistry.

Ideally, provision of solvation media for a chemical reaction and creating environmentally-friendly reaction process from the stand point of green chemistry are inseparable. Putting this ideal approach aside, volatile organic solvents polluting our environment and different solvents lacking some merits have been used for centuries. The likely options to curb these problems involve making use of solventless reaction medium (often in refineries and petrochemicals) and development of cleaner, efficient solvents. Recently optimistic efforts are underway to replace the provocative scenario encountered from abundantly used, environmentally unfriendly volatile solvents by save and green chemistry solvents.

For conduction of chemical process and material synthesis, aqueous and organic reaction media have been used invariably. Readily availability, non-inflammability, non-toxicity, and environmentally benignity are irreplaceable benefit obtained from using water as a solvent. However, high or low temperature reaction conditions and dealing with organic solutes along with water as a solvent are the challenges for its narrow liquid (0-100°C) range and inability to dissolve them respectively. On the other hand, insolubility of inorganic reactants, high vapour pressure and low melting points characteristic feature of organic solvents reduces preferability [10]. Beside this, some organic solvents are, explosive, inflammable and toxic. Therefore, seeking alternative reaction media is something which is plausible.

Ionic liquids are materials that are formed solely of anions and cations (any salt above its melting points). On the other hand molecular solvents (benzene, chloroform, methanol, water etc.) are composed of neutral species. Because many ionic materials in molten/liquid state require high temperature [37]. eg. NaCl-around 800°C, and therefore makes reaction condition impractical particularly for organic synthesis, a conventional meaning was given to it. Conventionally ionic liquid is family of molten salts usually with melting point below 100°C, sometimes even below room temperature [67].

Ionic liquids are formed from organic cations which are usually large and asymmetric like; derivatives of imidazolium, pyridinium, pyrrolidinium, ammonium, phosphonium and sulfonium. Common anions include; halides, tetrachloroaluminate, hexafluorophosphate, tetrafluoroborate and bis (trifluoromethylsulfonyl) imide-which are inorganic and organic anions like alkylsulfate, alkylsulfonate, p-toluenesulfonate (tosylate) and trifluoroacetate 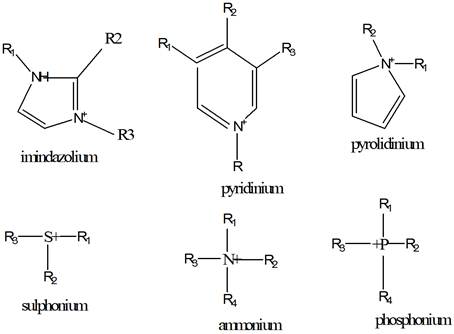 Ionic liquids have several tremendous characteristic features that render it preferable over the traditional type of solvents [33 and 50].

• Solvating ability: When an ionic liquid is used as a reaction solvent, the solute is solvated by ions only, where the reaction proceeds under quite different conditions as compared to using water or ordinary organic solvents which are neutral molecule.

• No/ little vapour pressure: ionic liquids have negligible vapor pressures that make them important for minimizing the exposure to toxic volatile vapors as in the case of organic solvents.

• Large liquid ranges (span of temperature between liquid and gas (vapor) is large.)

• Tunable miscibility with water and other organic solvants.

102 years on, since the synthesis of the first ionic liquid, ethyl ammonium nitrate [C2H5NH3][NO3] (melting point 12°C) was reported. Neutralization of ethylamine with concentrated nitric acid was made use of by Walden for its synthesis [48]. It is categorized under protic ionic liquids as it involves proton transfer during synthesis. Another category of ionic liquid called, aprotic ionic liquid synthesized from alkylpyridinium chloride and aluminium chloride was reported in1954 [32 and 52]. In the case of aprotic ionic liquids, the cations are usually derived from the alkylation or alkyl–cation-transfer reaction of organic compounds with alkyl halides. Presently they are not in active use, owing to the fact that they are sensitive to air and moisture. A milestone in the field is the discovery of water-stable ionic liquids containing tetrafluoroborate, hexafluorophosphate, nitrate, sulfate, and acetate anions by Wilkes and Zaworotko in 1992 [27]. Since then, many ionic liquids composed of organic Cations and inorganic or organic anions have been developed [23]. Because large varieties of Cations and anions are available, their combination amounts to numerous potential ionic liquids. However, only a few typical ionic liquids especially those containing imidazoliumcations, are commonly used at the moment [58 and 68].

Even though longer time is needed for the preparation of ionic liquids, even when heated in oil bath, quaternization is the key and often the only step. As long as 72hrs refluxed reaction could be needed. Ultrasonic atmosphere and microwave activation have been used to considerably decrease the reaction time [22]. Alkyl halides are widely used as alkylating agents in a quaternization reaction. The reactivity of alkyl halides determine the duration of reaction process (reaction time) and the temperature required for the reaction. In this regard, both the alkyl chain length and the reactivity of the halide used highly influence the reaction rate. As long alkyl chain decreases the reactivity of the reaction, the reactivity of the halide increase down the group (iodine is more reactive than bromine which is in turn more reactive than chlorine) for a given chain length and this is expected for neuclophilic substitution reaction, SN2 [3]. Of the cares that are important in the process is a careful heating, since excess heat during the reaction generates a discolored product indicating impurities which might have been formed in the solvent. During synthesis of ionic liquid, once it is formed, it is immiscible with the starting material, dense phase on the bottom of reaction flusk forms. Therefore, stirring is necessary as the reaction proceeds. Common alkylating agents, such as methyltriflate, methyl sulfate, octyltosylate, and methyl tosylate, could be used in the quaternization reaction [38 and 31].

For impurities having great impact on the physical properties and stability of ionic liquids, quality should be uncompromised during its synthesis. Completion of the reaction should be accompanied by characterization of the formed ionic liquids. Ionic liquids could be analyzed by NMR, MS, elemental analyzer, TGA (thermal stability to know their upper temperature limit), melting point apparatus (determination of a liquid range of an ionic liquid is necessary in order to know a temperature range, where IL can be utilized). X-ray diffractometer (determination of crystal structures) etc… [64].

As has been discussed above impurities like water, organic solvents certain ions like chloride, affect the physic-chemical properties of ionic liquids.

a Diffusion and Conductivity

Targeting green chemistry, suitable or friendly reaction conditions have been vigorously studied. Reactions in air, water, supercritical fluids, fluorous solvents are few of them. Very recently, particularly for organic synthesis, the attention to ionic liquid is taking the upper hand. Here some applications where ionic liquids could be employed are presented.

Electrochemical devices:-ionic liquids consist of only ions and have high ionic conductivity. Non volatility, large electrochemical window, prevention of electrolytes from drying during operation, non-flammability, and non corrosiveness are the main importance obtained from utilizing ionic liquids in this field [21].

Some examples of ionic liquids in this area are:

Fluorination reactions; in heterocyclic compounds, for instance, bmimBF4, is used as indicated below. [63]

Ring opening reactions; by opening rings, certain important compounds, like biologically active molecules can synthesized. Among the advantages from making use of ionic liquids in this regard, low reaction temperature and high yield can be mentioned [23].

Reduction reactions; many organic compounds can be transformed from one form to another via reduction process. Traditional ways of doing this require relatively higher temperature, and the amount of yield obtained is not appreciable [19 and 24].

Fig. 6. Reduction of aldehyd to alcohol in the presence of ionic liquids.

Suzuki-Miyaura coupling reaction; in this reaction biaryls are obtained from aryl halides and aryl boronic acids in the presence of a palladium catalyst and a base. The benefit of using ionic liquid in this reaction is retention of the catalyst which is difficult in the absence of ionic liquids [4].

Forgetting the tediousness in recovery of the catalysts and product separation, addition of hydrogen to carbon-carbon double bond using transition metals/their compound is common in chemistry. As one example is reported by Dupont et al, completion of the hydrogenation reaction is followed by the existence of the product in alcoholic phase but the catalyst in the ionic liquid rendering separation of the catalyst and the product by simple physical method, decantation, paving the way for reuse of the catalyst [2].

Diels-Alder reaction; the ratio of products (endo/exo) obtained from cyclopentadien and methyl acrylate ester using 1-ethyl-3-methylimidazolium chloride/chloroaluminate [emimCl/(AlCl3)X], depends on the ratio of emimCl/(AlCl3)X. Basic emimCl/(AlCl3)X decreases the amount of endo form by one fourth as compared to the acidic counterpart [7].

Witting reaction; even though separation of the product of interest and that of sideway is a familiar threat, it is one way of producing carbon-carbon double bond. The usual way of increasing quality is employment of methods like crystallization and chromatography. To curb the challenge and reutilization of the solvent ionic liquid is most preferred [59].

Heck reaction; in the presence of polar solvents like DMF and acetonitrile, a palladium catalyst is used in this reaction. Unless aryl iodide is used in this case, aryl bromide and aryl chloride need either more active catalyst or addition of phosphine ligands to retain catalytic activity.

However, high yield of stilbenes can be obtained without phosphine ligand when aryl bromide reacts with styrene in presence of 1-butyl-3-methylimidazolium bromide (bmimBr) as solvent [35].

Stille reaction; a palladium catalyst is required to form a carbon-carbon bond between organotin compound and an electrophic reagent in this reaction. In the presence of bmimBF4, the reaction between vinyltributyltin and iodocyclohexenone end up in the product formation which could be extracted with ether. Beside this, the catalyst is retained in the ionic liquid, the catalyst and the ionic liquid can be reused as they are, the ionic liquid/catalyst phase is air and moisture stable so that can be used for longer [54].

Friedel-Crafts reaction; helpfulness of bmimBF4 in a copper triflate catalyst with variable ortho/para product was reported [25 and 29].

In this review, an attempt has been made to advocate greener chemistry via ionic liquids. In this regard, different properties of ionic liquids that make greener, its historical back ground, quality in its synthesis, different chemical processes where it is applicable and other specific issues related to it were reviewed. The significance of this review is to contribute some information for the readers who are encouraging greener chemistry and who wants to pursue their research in this area for further environmentally friendly development of ionic liquids.