The pollution control and environmental safety have got global attention and has opened new window for development in the adsorption process technology. In many industrial processes, for example, textile, washing, printing release pollutant into stream. Thus effluent treatment plant, a mandatory measure to recover them or reduce their concentrations in effluent streams, is employed due to environmental concerns, where adsorption method is used as it is one of the most effective and versatile methods. Activated carbons, are frequently used as adsorbent, remove a numerous species from waste stream as it has an excellent adsorption capacity, which is related to a large specific surface area and porousness. Several investigations have been found using activated carbon for removal of various species [1-13]. Despite its prolific use, activated carbons in water and wastewater industries, commercial activated carbons remain an expensive material. This has led to a search for low-cost, easily available materials as alternative adsorbent materials. Proper utilization of agro industrial by-product is very much important for economic development. A wide variety of activated carbons have been prepared from agricultural waste such as coconut shells, cotton stalk, sugarcane bagasse, coir pith, straw [14-18] and also from non-renewable materials like coal, wood, and peat [19-23].

Activated carbons adsorb a wide variety of substances including different types of dyes and heavy metals. It is the porous structure and chemical nature of the surface of carbons that govern this property, both of which are related to the crystalline composition. Although the microcrystalline structure is dependent on the raw material, impurities and conditions of production, the basic structural unit is similar to that of graphite.

Pore size is an important parameter for quality of activated carbon. Based on the effective radii and mechanism of gas adsorption, pores are classified to be macro-pores (>50 nm), meso-pores (2 to 50 nm) and micro-pores (<2 nm) [24, 25]. The main role of macro-pores in adsorption is to act as transport arteries that allow the meso- and micro-pores to become accessible to particles of the adsorbate. Meso-pores contribute significantly to the adsorption process and also provide the main transport arteries for the adsorbate. Adsorption occurs in micro-pores through the mechanism of volume filling. The energy of adsorption in micro-pores is much higher, resulting in a large increase in adsorption capacity for small equilibrium pressures of adsorbate. The molecular sizes of different pollutant species are different. Therefore, activated carbon having smaller pores are not able to adsorp pollutants having larger diameter. Hence, there is knowledge gap of developing different pore sized activated carbon warrants conducting study on variation of pore development in activated by various methods.

In this study, we investigated the effect of activation agent on variation in pore size development in activated carbon; and evaluated them by adsorbing two distinct adsorbents having differences in molecular size.

Activated carbon investigated in this study prepared from rice husk. Rice husk char was prepared as described in [32, 33]. Two grams (2 g) of rice husk char was soaked in zinc chloride solution for 24 h. Then the crucible was placed inside a muffle furnace to give a required heat treatment. After activation with zinc chloride, the samples were washed with 0.3 (N) hydrochloric acid solutions firstly and then washed with distilled water until the pH value reached 7.0. After washing the samples are dried in an oven at 105 °C for 24 h. Then the dried samples are preserved in desiccators to avoid further absorption of moisture. Similar procedure was followed to prepare phosphoric acid activated carbon. The ratio of rice husk char and activation agents were fixed after several trials. The detail methods are described in [32, 33].

In this method, specific surface area was measured based BET procedure. One form of the well-known BET equation [34] that describes the physical adsorption of gas upon a solid surface is as in equation (2):

From equation (2) the value of Vm is calculated as in equation (4).

By putting the value of AV, N, and M in equation (3) can be simplified as following equation (5).

BET surface area measurement experiment was conducted by using Micromeritics equipment (Model: Pulsechemisorb 2705) at the laboratory of Chemical Engineering Department, Bangladesh University of Engineering and Technology, Dhaka. The equation (2) was plotted with reading from micromeritics equipment; slope and intercept were estimated from the plot; finally, the BET surface area was estimated from the equation (5).

To determine the equilibrium time a kinetic study was carried out. The time to reach equilibrium was determined by a series of measurements over the range of 30 min to 480 min at room temperature. Contact time study was investigated to examine the rate of adsorption of different types of activated carbon prepared in this study. Methylene blue solution of 5x10-5 M (16 mg/L) concentration was used in this investigation. 100 ml of methylene blue solution was taken in reagent bottle and 0.01 gm of activated carbon was mixed and stirred thoroughly. Sample solution was withdrawn at a predefined interval of time. The solution was centrifuged and carbon particle free solution was placed in a UV vis. Spectrophotometer to determine the absorbance and finally to calculate the adsorbed amount of methylene blue after a specific time. Dye removal percentage was plotted against time. 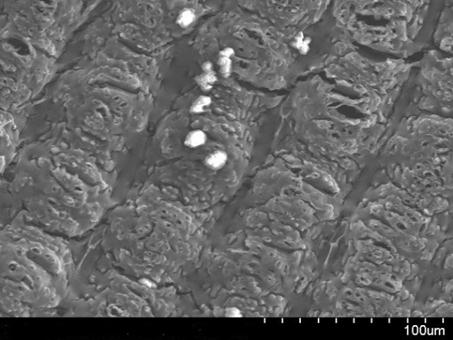 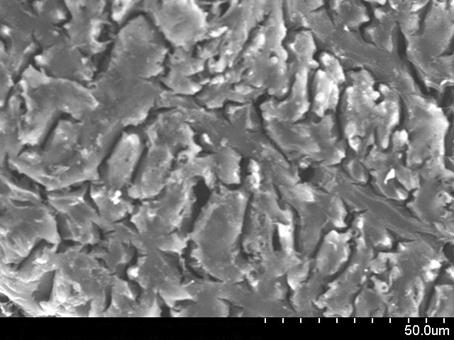 3.2. Effect of Zinc Chloride and Phosphoric Acid on Surface Area

The BET surface of phosphoric acid treated activated carbon was found to be 718 m2/gm (Fig. 3). The specific surface area of this sample was calculated as 646 m2/gm by the technique of methylene blue adsorption. It reveals that 10% more surface area was under coverage accounted due to adsorption of smaller molecule of nitrogen at micro and nano-pore level compared to bigger molecule adsorption of methylene blue. 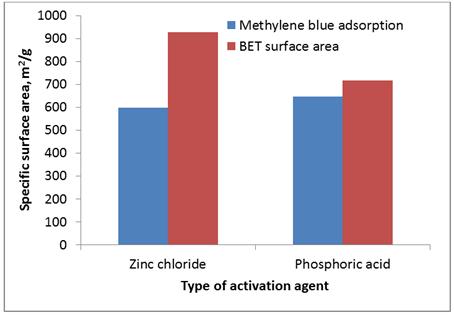 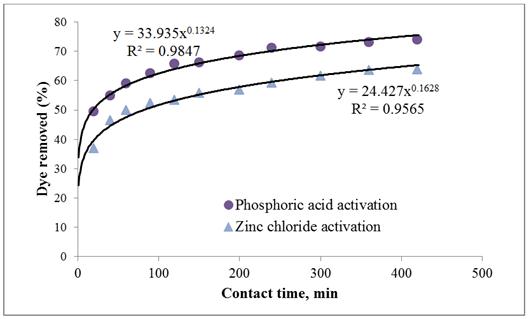