Abstract: In this study, the adsorption of Acetic acid from an aqueous solution is investigated using activated charcoal prepared from Bitter leaf (Vernoniaamygdalina) that is activated by tap water. Carbonizations at different activation temperature with constant flow of air are used to examine for accepted accessibility of sorbent material. The optimum conditions obtained from this batch adsorption experiments highest adsorption capacity is recorded at activation temperature=400°C, contact time=60 min, pH=6, temperature=25 ± 2°C, charcoal (adsorbent) dosage=0.04 g, acid concentration=0.097 mol/L. More than 85 percent adsorption of acetic acid was recorded in every batch laboratory experiments. Adsorption kinetic and its equilibrium behaviors are studied. It indicates that the adsorption process obeys Pseudo-second-order kinetic and Langmuir isotherm models. The characteristic results and dimensionless separation factor (RL) showed that Bitter leaf wood can be employed as an alternative bio-sorbent in the removal of carboxylic acid from an aqueous solution. The adsorption of acetic acid by Bitter leaf fit well into pseudo second order rate equation and the adsorption also obeyed Langmuir isotherm with a separation factor (RL=0.89). Fourier transforms infrared (FT-IR) analysis treated by tap water indicating good chemical transformations would have taken place.

The characterization of porous solids material is very useful in the study of physicochemical properties with the most convenient route of adsorption capacities and the suitability of the adsorbent for a particular process. Adsorbents have been commonly used to solve some environmental and related issues [1-4]. The adsorption of an organic compound appears paramount because it improves the understanding of the effectiveness of the adsorption of materials and allows investigation, adsorption mechanism, and the effects of the adsorption parameters. It requires a micro porous adsorbent, capable of exchanging ions and creating chemical bonds [5].

There are a wide variety of adsorbent materials such as silica gel, zeolites, synthetic adsorbents (resins), clays, activated alumina, industrial wastes, bioadsorbents and activated carbon [6]. This is because of their high adsorption capacity, their porous structure and accessibility of their surface [7]. They are used in water treatment and in industrial applications such as in the extraction of metal ions, air handling, and purification, the discoloration of food in the food industry and in the pharmaceutical and chemical industry. Nowadays different parts of plants (hardwood, softwood, and shrubs) have an effective and efficient incentive for health to save life. Bitter leaf (Vernoniaamygdalina) is a small shrub that grows in the tropical Africa. It is called bitter leaf because of its bitter taste [8]. In addition it used as a traditional herbal medicine after extraction either from its powdered leaf, bark or root [9].

Adsorption is categorized into physical and chemical process. The chemical adsorption is monolayer and shows formation of strong chemical bonds between adsorbate molecules and specific surface locations also referred to as chemically active sites. The equilibrium relationship of adsorbent and adsorbate at constant parameter like temperature is very informative with their isotherm models such as: Langmuir and Freundlich in a variety of studies [8,10].

This work is based on the preparation and characterization of the adsorption properties of activated carbon obtained from Bitter leaf wood under different parametric conditions and different solution ratios. Finally, Langmuir and Freundlich isotherms were determined and the comparison of these properties has been analyzed.

All chemicals used in this study were of analytical reagent grade and were used without further purification. Bitter leaf wood samples were collected from Adama, Rift Valley, Ethiopia. Each of the samples was chopped into chips, air dried in the laboratory at ambient temperature for 4 weeks and was broken up in to a small pieces. The pieces were washed with distilled water dried in an oven at 110°C and transferred to the muffler furnace (Model SXL, China). The bitter leaf wood pieces were burnt distinctively in the furnaces for an hour by fixing the temperature at 300°C, 350°C and 400°C. Charcoal thus produced was withdrawn from the furnace, cooled, washed with tap water, and dried in an oven at 110°C and ground with a mortar by means of a pestles applying moderate pressure. They were sieved through 100-200 mesh sieves and then activated at 300, 350 and 400°C in a furnace for an hour in a constant flow of air. After cooling it was collected in a desiccator and ready for use [11]. Fourier transform infrared Spectrum 65 FT-IR (PerkinElmer) were recorded in the range 4000-400 cm-1 using KBr pellets under standard conditions.

Blank titrations were carried out using 0.1M NaOH solution as titrant against the various acetic acid concentrations: 1.2, 1.0, 0.8, 0.6, 0.4, and 0.2 M, respectively. Averages of triplicates titers were taken. Then, 0.05 g prepared activated charcoal as an adsorbent was placed in each of 6 of 250 ml Erlenmeyer flasks and 50 ml of each of the acetic acid concentrations added. The flasks were Stoppard and agitated periodically for 60 minute and allowed to stand for 30 minute to attain dynamic equilibrium by following the literature [11]. First, 5 ml of the filtrate was carefully discarded and thereafter 10 ml of same filtrates was titrated against 0.1 M NaOH solution using phenolphthalein as an indicator. This procedure was carried at room temperature, 25°C repeatedly three times to determine the appropriate equilibrium concentrations (Ce) of acetic acid.

The drawing curves of the data obtained were performed using Microsoft excel and Origin8 software.

It is observed that from fig. 1, acetic acid adsorption on charcoal sharply increased initially and gradually settle to a maximum value with increase in acid concentrations (adsorbate) during the presence of air. It observed that adsorption was effective at higher activation temperature in the same conditions, indicating that the activated charcoal is very easily saturated with acetic acid molecule at low concentration. 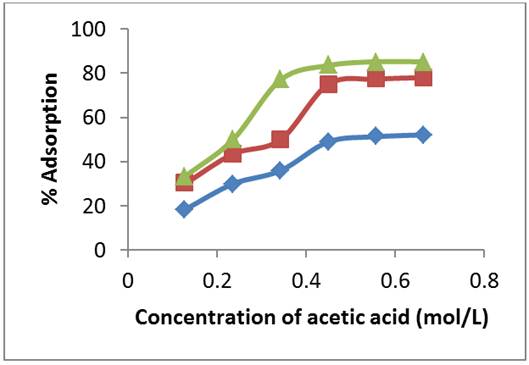 Fig. 2 illustrates evaluation of adsorption as a function of time. The result showed that the rate of acetic acid adsorbed on bitter leaf wood charcoal at the beginning it was rapid and then it slowly increases gradually until equilibrium was attained then the expected equilibrium was established at 60 min. 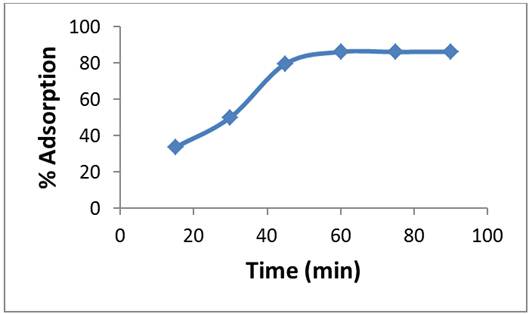 To control the adsorption process in the aqueous media controlling pH is most important. So, to evaluate pH in this study, the adsorption process was carried out from 2-12 by keeping all other variables constant. It was observed that from fig. 3 the prepared charcoal is effective to adsorb the impurity (adsorbate) at pH=6. The uptake of acetic acid increased when the pH was increased from 2 to 6 while pH values above 6 the percentage adsorption) decreased with increase in pH. The minimum adsorption observed at high pH of 12 could be, on one hand, due to the fact that the presence of higher concentration ammonia that used during the adjustment of pH 12. 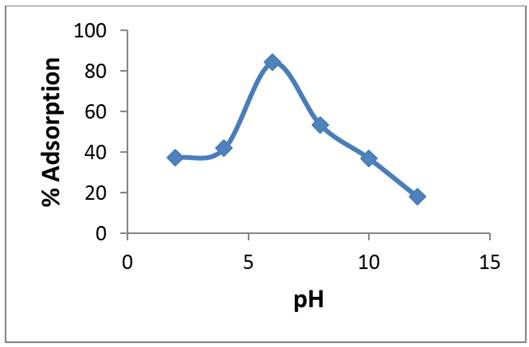 The effects of temperature on the equilibrium adsorption capacity of bitter leaf using acetic acid are shown in fig. 4. The result obtained indicated that the change in temperature from the given range effect adsorption was took place at 25±2°C. 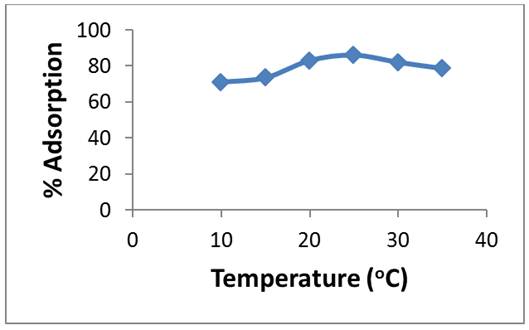 This effect is an important parameter in the study of adsorption because it determines the effective adsorption capacity of adsorbent. Fig. 5 shows an effective dosage study in the specific initial concentration of an acid. Therefore, from the obtained data maximum adsorption was obtained at charcoal mass, m=0.04 g. This shows that this amount of adsorbent is highly effective to adsorb the adsorbate (CH3COOH) on its surface. However, the decrease in percentage adsorption of the adsorbent with increase in charcoal mass is due to unsaturation of adsorption sites through the process [12]. 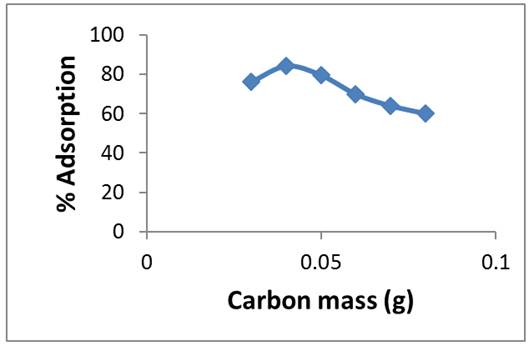 This factor depends on the immediate relation between the adsorbate concentration and the availability binding sites on the adsorbent site. The effect is shown in fig. 6, the amount of acetic acid increased up to 0.097 mol/L, due to the better interaction between adsorbate and adsorbent, maximum at 0.097 mol/L (stable), then gradually decreases (due to the lower adsorption site). 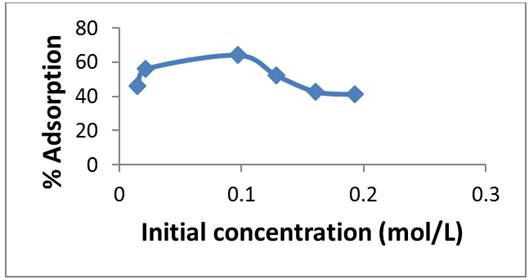 To describe the formation of a mono-layer adsorbate quantitatively on the outer surface of the adsorbent, Langmuir represents the equilibrium distribution of acetic acid between the solid and liquid phases. The model assumes uniform energies of adsorption onto the surface and no transmigration of adsorbate in the plane of the surface based upon Langmuir assumptions:

Where, Qe=the amount of acetic acid adsorbed per gram of adsorbent at equilibrium (mol/g), Ce the equilibrium concentration of the adsorbate (mol/L), Amax=maximum substance amount of adsorbate per gram of the adsorbent and K=the adsorption constant. From the linear plots observed in fig. 7 the graph was well fitted to Langmuir isotherm with the correlation coefficient values of 0.9934.So, the adsorption of acetic acid on Langmuir isotherm is favorable with a separation factor, RL=0.89which is in between 0 and 1. 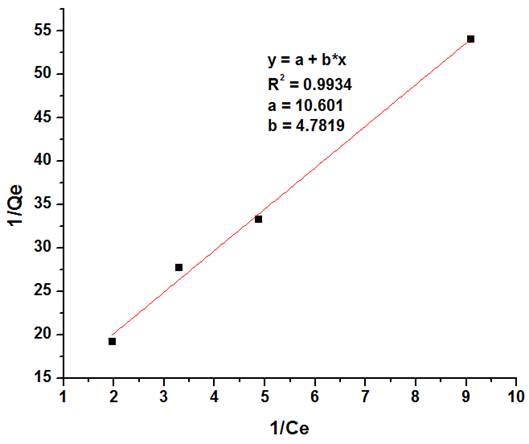 This is commonly used to describe the adsorption characteristics for heterogeneous surfaces and the data often fit the empirical equation given by: 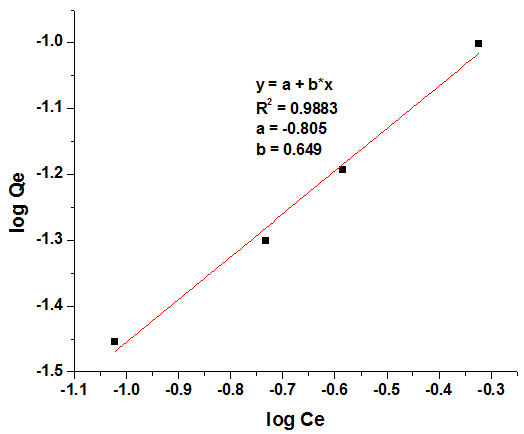 Where K=Freundlich isotherm constant (mol/g), n=adsorption intensity, Ce=the equilibrium concentration of the adsorbate (mol/L), Qe=the amount of adsorbate adsorbed per gram of the adsorbent at equilibrium (mol/g).The constants K and n, they are an approximate indicator of adsorption capacity. As observed from fig. 8 its regression value is 0.9883 and from the table its n value is 1.5408 which lies between 1 and 10 indicates the adsorption process is favorable.

For any adsorption system, the study of chemical kinetics is very important so as to determine the rate constants for the reaction and to know how quickly or slowly the reaction is proceeding. So, to examine the controlling mechanism of the adsorption kinetic process and to test the experimental data four kinetic models were obtained. These are the pseudo first order, pseudosecondorder, the elovich kinetic model and the intraparticle diffusion model equations are common [8,12]. Therefore, from the integrated second order rate equation: 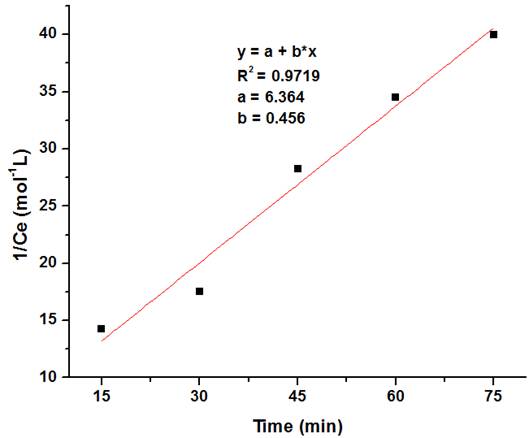 The slope and intercept of 1/ Ce versus t (time) plot gives k (0.456 mol-1L.min-1) and Co, respectively, As it’s observed from fig. 9 the correlation coefficient (R2) of pseudo second order was found to be recorded the highest value (excess of 0.9). However the highest R2 values was the optimum kinetic expression to represent the acetic acid adsorption by activated carbon prepared from bitter leaf wood and this result in good agreement with the previous work [8].

Fig. 10 shows the spectrum of Vernonia amygdalina wood after carbonization followed by activation with tap water. From the spectrum a strong and intense absorption band centered at 3428 cm-1is assigned to the hydroxyl group (OH) stretching vibrations and due to the wide hydrogen bond with this functional group. Also peak at 2923 cm-1 associated with the symmetric C-H bond stretching vibrations of CH2 group. The peak at 1692 cm-1 is the consequence of carbonyl groups (C=O stretching vibrations of carboxylic, C-COOH and ester, C-COOC) structures [13]. All the results indicate that functionalized sorbent could be established. 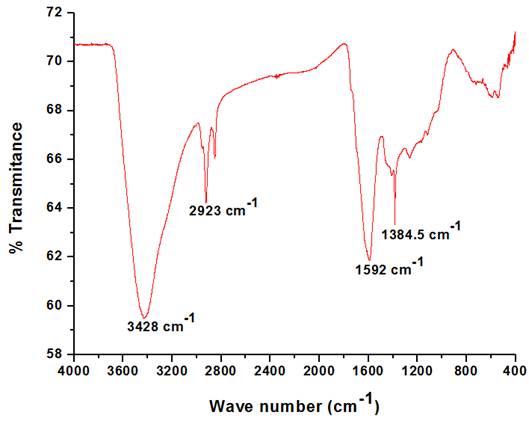 Fig. 10. FT-IR spectrum of the adsorbent Bitter leaf (Vernonia amygdalina) before the adsorption.

The adsorption of acetic acid (CH3COOH) by bitter leaf (Vernonia amygdalina) in the presence of air at selected temperature followed by activated with tap water has been studied. It can be conclude that the uptake of adsorbate (acetic acid) by the prepared charcoal at 400°C was effective at low concentration. The rate of this adsorption reaction is second order with respect to CH3COOH. Charcoal mass, contact time, temperature, and pH affect the adsorption process. There is an optimal pH of ~ 6 and the amount of CH3COOH adsorption is lower at higher pH. The efficiency (adsorption capacity) of an adsorbent is analyzed by adsorption isotherms like Langmuir isotherm and Freundlich isotherm by plotting an isotherm graph to determine the performance of the prepared charcoal. FT-IR analysis results indicates that the surface of the prepared adsorbent successfully functionalized with the expected functional groups to be active for removing impurities (adsorbate) from an aqueous solutions.

The authors would like to thank Adama Science and Technology University for financial support.