Abstract: Hydrocephalus is a pathologic dilatation of the ventricles which occurs progressively when provoked by a disruption in the production, circulation and reabsorption of the cerebrospinal fluid (CSF). This study aims to report the impact of co-morbidities on the surgical outcome of pediatric hydrocephalus in Guinea. It was a retrospective clinical study carried out at Friendship hospital, Sino-Guinea of Kipe, for 13 months. 107 patients were scheduled for hydrocephalus surgery. The incidence of Hydrocephalus was 8.20% related to the 107 patients admitted during our period of study. The main co-morbitdies encounter were, anemia (73 cases), respiratory infection (38 cases) malaria (malaria 37 cases), malnutrition (14 cases), deshydratation (11 cases), candidosis (7 cases), respiratory detress (6 cases), cutaneous infections (6 cases), convulsion (6 cases), meningitis (5 cases), otorhinolaryngology infection (2 cases), septicemia (2 cases) tardive neonatal infection (91 cases). The outcome of pediatric hydrocephalus, including surgical complications, neurological sequelae and academic achievement, has been the matter of many studies. However, much uncertainty remains, regarding the very long-term and social outcome, and the determinants of complications and clinical outcome. Hydrocephalus is a commonly encountered pediatric pathology in sub-Saharan Africa where it constitutes a major public health concern. The etiologies are still dominated by neonatal infections. The treatment is essentially a surgical approach.

Hydrocephalus is a pathologic dilatation of the ventricles, which occurs progressively when provoked by a disruption in the production, circulation and reabsorption of the cerebrospinal fluid (CSF) [1].

In the infant, it can occur at any age and may originate from a malformation, or post hemorrhagic process during the neonatal period, or following an episode of meningitis in the breastfeeding infant; or due a tumor obstruction in a toddler [2].

Pediatric hydrocephalus (HC) is a surgical disease. If left untreated, most cases are lethal. With present-day Standard of care, most patients with HC will survive; however, death from hydrocephalus largely prevails even today, and the sequelae among long-term survivors are frequent and often severe [3]. Because of the multiplicity of causes of hydrocephalus, associated diseases, complications of treatment, and the inherent complexity of the patient population, reliable data on outcomes are difficult to obtain. The outcome of hydrocephalic patients has been the subject of many studies, some presenting conflicting results, and many focusing on a limited view of this vast field

Shunt failure can be aseptic (malfunction) or septic (shunt infection). Malfunction includes obstruction, over drainage, under drainage, and occult shunt failure (including the need for elective revision for tube lengthening).

Its occurrence being duration-dependent, the incidence of malfunction is generally expressed as actuarial survival. Reoperation, although potentially subject to surgeon bias, can be seen as the best criterion to define malfunction, as it is a binary variable and a dated event, allowing survival analysis Different types of infection rates can be calculated and should be clearly specified: by operation (number of operations complicated by infection); by patient (number of patients in a series having had at least one septic episode); by surgeon (number of septic complications among the total number of patients operated by a given surgeon), or by hospital [4] and actuarial incidence. Rates by surgeon or by hospital can be difficult to ascertain because patients are often operated by different surgeons or in different hospitals [5].

In order to identify the principal pathologies, which are most commonly associated with hydrocephalus for planning management, we have conducted a retrospective study over a period of 13 months by selecting cases encountered and treated in the Neurosurgical department of Friendship Hospital Sino-Guinean in Kipe. Consequently, we have proceeded with a review of African literature and compared with similar studies that provide information on the impact of comorbidities on the surgical outcome of pediatric hydrocephalus.

It is a descriptive retrospective study conducted in the Neurosurgical department of friendship hospital Sino-guinea in Kipe. 107 hospitalized cases of diagnosed hydrocephalus were collected over a period of 13 months.

Evaluation of co morbidities was carried out by investigating antecedent medical history and surgical history separately.

Statistical analysis was performed using SPSS version 12.0 software, and Student t-test to display the link among the variables in this study. P value smaller than 0.05 was considered statistically significant.

In our study, the incidence of hydrocephalus has been found to be 8.20% related to 107 patients who were admitted during our period of study.

Table 1. Distribution of cases according to antecedent history.

The liquid was clear and transparent in 38 cases, purulent in 5 cases, turbid in 6 cases, bloodying 15 cases. 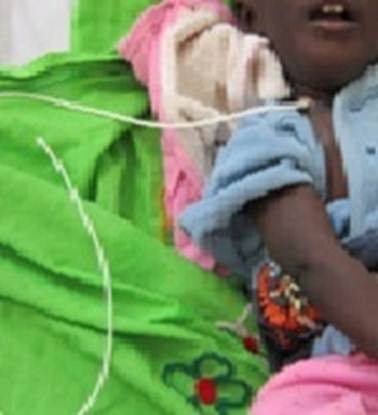 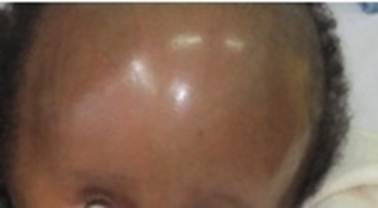 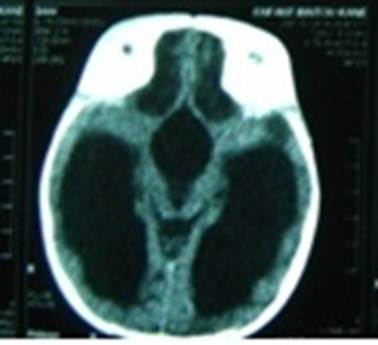 Fig. 3. CT scan putting into evidence the fluid in the lateral ventricles in an infant with hydrocephalus.

WHO estimated the incidence of hydrocephalus to be 3-4 for every 1000 births in the world. In the countries with substandard medical care, 70% of children remain untreated. The mortality rate in the patients following treatment was noted to be 17%, mostly occurring after the first 2 years of life. General management of hydrocephalus in infants, it is primordial to identify associated pathologies and their impact in the evolution of the conditions in these particular patients.

One of the most crucial factors related to worsening conditions is the regularity of complications arising due to a primitive disease or due to interposed pathology. The post-operative complications linked to shunts also intervene in a notable manner [6].

In 2012 in Guinea, a study on the management of hydrocephalus in children revealed that the most common associated pathologies in their patients were malaria (33.2%), buccal candidiasis (24.9%) and bronchopneumonia (24.9%) [32].

We have thus collected 107 (37.8%) cases linked to hydrocephalus out of a total of 291 patients in our department over 13 months. This proportion is considered relatively elevated, especially, in relation to the free-of-charge treatment offered by the hospital, encouraging more patients to accept treatment. In the majority of cases (83.2%), hydrocephalus was found to be linked to pathology.

The increase in cranial volume was noted to be the primary reason for seeking medical consult in 88 cases (69.1%), followed by bulging fontanel (21.4%), fever (15.9%), weight loss (13.8%), cough (11.2%). Macrocephaly prevails as the principal sign for seeking medical consult in the majority of reported studies; Sylla A [32] in 2009; Sidibé N [15] in 2012. History taking helped to reveal the preceding symptoms which have contributed to the development of macrocephaly. This finding partly explains the delay in admission.

The delay in diagnosis is marked by socioeconomic and cultural factors which dominate the choice for seeking less conventional methods of treatment.

Macrocephaly and bulging anterior fontanel, had been confirmed by physical examination in 90.72% and 64.48% of patients respectively. In close to 50% of cases, sunset eye sign was observed, in one third of cases symptoms related to pathologies were noted: palor of integuments (42.05%), rales (2.29%), malnutrition (13.08%) and cutaneous lesions (2.8%).

Analysis of head parameters on admission revealed that over 50% of cases (29 cases) had minimal macrocephaly (1-5cm), or of mild degree (6-1cm). In a lesser proportion, we registered a moderate macrocephaly of 10-15cm (17.5%), and 19 cases with high degree of macrocephaly of 16cm or more.

It is necessary to highlight that in this series, only 9 patients admitted had normal cranial circumferences, implying a premature admission. It signifies that the first obvious sign of bulging fontanel is rarely the only motive for seeking appropriate treatment. At any degree of cranial circumference distention, macrocephaly remains a crucial factor to urge parents of patients to obtain consultation.

CT of the cerebral ventricles was considered as a key diagnostic element. It was performed in all admitted patients and allowed us to identify that 44% had a hydrocephalus involving the lateral and 3rd ventricles simultaneously. Quadriventricular hydrocephalus is the most commonly seen form as described by Tapsoba et Coll [113]; BA M. C. et Coll [12]; Adjenou k. et Coll [27].

In some rare cases, hydranencephaly (6.54%) and extreme hydrocephalus (2.8%) have been reported. In Cameroon, the proportion of malformation-related hydrocephalus was as high as 60% [1].

Other African authors [22] have equally mentioned the co morbidities linked to malaria and respiratory diseases which affect both vital prognosis and functionality.

Other congenital anomalies of the brain have been evidenced by the use of CT with a net predominance of Dandy Walker cyst (13.88%). Anomalies revealing infections of the nervous systems were uncommon but not rare with observed cases of encephalomalacia (7.48%) and intraparenchymal abscess (2.8%).

In the series led by de Kanikomo et Coll [29], the incidence of congenital hydrocephalus was higher (62.62%), infections linked to hydrocephalus, most post-menignitic in nature at 27.69%, tumor-linked in 2 cases.

It is critical to note that consanguine marriage is still widely practiced in present day, and favors the hgh risk of congenital hydrocephalus related to malformations.

The reluctance observed in pregnant women to obtain prenatal care at health centers renders difficult the strategy of providing folic acid supplementation, and therefore, entails a higher rate of malformations.

The lack of regular post natal follow ups contributes to the development of acquired pathologies. Consequently, co morbidities present at admission were as high as 83.77%, with anemia predominating (68.22%), followed by respiratory infections (30.84%), malaria (25.23%), malnutrition (13.08%), and dehydration (10.23%).

Pediatric patients in the age range of 0-24 months were the most affected by these diseases, with the majority between 1-11 months of age. This age range correlates not only with the most represented age group but also with the lack of environmental and provision of pediatric health care.

Improvement was observed in more than two thirds of cases which initially presented with anemia (76.7%), respiratory infections (72.2%), and malaria (70.4%). However, we still reported a mortality rate of 33.3% in cases with seizures, 25% in dehydration, and 22.2% in malaria. It should be specified that a late neonatal infection is linked to a more severe presentation, whereas respiratory distress or septicemia are both fatal in 100% of cases.

Despite contraindications overlying the associated pathologies, it was concluded to be more beneficial for the patient to undergo surgery in order to halt the deterioration of prognosis in terms of functionality and survival.

The patients who presented without any pathologies showed good post-operative recovery. In those who had associated diseases, over two thirds had improved, a small percentage (7.5%) showed no improvement, postoperative deterioration in 4.75% and deaths in 11.2%.

Although the duration of stay in our study was lesser than in some African series, it was still considered elevated when compared with reports from Europe, and had a significant link with management of the associated pathologies on admission (P-value = 0).

The impact of co morbid conditions affecting the management of hydrocephalus in the tropical region remains evident. In our context, the most commonly encountered pathologies are anemia, respiratory tract infections, malaria, malnutrition and dehydration. The associated pathology affects the choice of management for each patient, and its impact is felt by the delay in performing the surgery and the post-operative result, as well as functionality and long term prognosis.

A more detailed study targeted on each principal pathology needs to be conducted in view of better analyzing the pathologic link with the development of hydrocephalus in the tropical regions.