Abstract: A novel non-metallocene titanium complex was synthesized, and used as the catalyst for ethylene polymerization. It results in an acceptable activity, affording the polyethylene with ultra high molecular weights, and relative broad molecular weight distributions. Moreover, the molecular weight almost doesn’t change with the change of Al/Ti ratio.

We report a novel titanium catalyst system based on a chelating alkoxy-phenoxo ligand for ethylene polymerization. The catalyst exhibits the acceptable activities. Importantly, the novel catalyst produces the polyethylene with ultra high molecular weight.

All experiments were carried out under a nitrogen atmosphere in a Vacuum Atmospheres drybox or using standard Schlenk techniques, unless otherwise specified. All chemicals used were of reagent grade and were purified by standard purification procedures. Toluene, xylene, and tetrahydrofunan (THF) were distilled in the presence of sodium and benzophenone under a nitrogen atmosphere, and were stored in a Schlenk tube in the drybox over molecular sieves. 2-Bromophenol, butyllithium (2.5 M in hexanes) and benzophenone were purchased from Acros. Titanium tetraisopropoxide was purchased from Strem. Methylaluminoxane (MAO) solution (10 Al-wt % in toluene) was purchased from Albemarle Corp and used as received.

Ligand was synthesized according to a modified procedure in reference (see Sch. 1) [16]. 2-Bromophenol was dissolved in tetrahydrofunan (THF, 50.0 mmol/50mL) under the nitrogen atmosphere. After butyllithium (n-BuLi, 105.0 mmol, 2.5 M in hexanes, 42.0 mL) was slowly added at -15 oC, the mixture was stirred for approximately 20 hours at r.t., and then cooled down to 0 oC, benzophenone (50.0 mmol in 30 mL THF) was added dropwise. The reaction was continued for overnight at room temperature, and then refluxed for 2 hours. The mixture was cooled down to room temperature, and treated with saturated ammonium chloride aqueous solution. The oil phase was separated and dried with anhydrous sodium sulfate. After removing the solvent, the residue was dissolved in toluene and frozen until the white solid precipitated. Washed with hexane, the solid was separated in vacuum (1, yield 76%).

2.3. Synthesis of the Titanium Complex 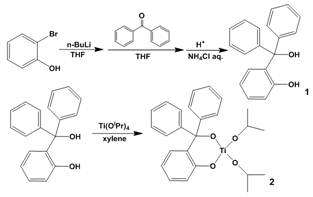 Sch. 1. Synthesis of the alkoxy-phenoxo ligand and the titanium complex.

Ethylene polymerizations were conducted in a 250 mL glass reactor, and detailed conditions were found in Tab. 1. Glass reactor was purged with nitrogen and charged with an ethylene atmosphere (1 atm). Toluene and the calculated amount of MAO solution were introduced. After the addition of a toluene solution of the catalyst, the mixture was stirred magnetically for 20 min. And then the mixture was poured into ethanol (EtOH, 150 mL) containing HCl (10 mL). The resultant polymer was collected on a filter paper by filtration, washed thoroughly with EtOH, and was then dried in vacuum.

The ligand was synthesized with 2-Bromophenol as the starting material. The modified procedure was adopted according to the reference [16]. The reaction of 2-Bromophenol with 2 equiv. n-BuLi under the low temperature in THF gave the dilithiumphenoxide. And then, ligand (1 in Sch. 1) was obtained from the reaction of the dilithiumphenoxide with benzophenone, followed by hydrolysis with saturated ammonium chloride aqueous solution, with a yield of 76 %. The reaction of the ligand with titanium tetraisopropanolate under reflux produced the titanium complex, with a yield of 63 % (see Sch. 1). The 1H-NMR spectroscopy showed that some impurities contained in the final product (see Fig. 1).

Ethylene polymerization by the titanium complex combined with MAO was conducted. The conditions and results are collected in Tab. 1.

Fig. 2. Relations of activities and molecular weight of PE with Al/Ti ratios. 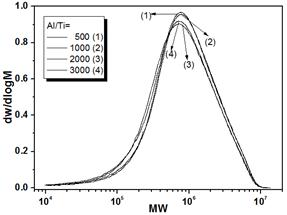 Although some impurities contained in the titanium complex, the ethylene polymerization was efficient. By increasing the ratio of MAO to catalyst (Al/Ti), the increased profile of activities could be observed. At the Al/Ti ratio of 3000, 0.39g polyethylene was isolated, corresponding to an activity of 2.34x105 g-polymer/mol-Ti/hr, while the activity was 1.14x105 g-Polymer/mol-Ti/hr when the Al/Ti ratio was 500. This is consistent with the general observations in metallocene systems (also see Fig. 2) [17]. The activity is acceptable with the comparison to the previously reported non-metallocene catalyst with a dianionic chelating ligand [7-15].

Although we don’t have an adequate evidence to interpret the ultra high molecular weight of the resultant polyethylene, we assume the unique structure of the catalyst precursor is the reason for the polymerization behavior and characteristics of the polyethylene. The bulky hindrance of the ligand impedes the chain transfer to aluminum, resulting in the high molecular weight. At the same time, the conjugated structure of the benzene rings reduces the electronegativity of oxygen atoms, which may cause the active site unstable to lower the activity, or cause the dissociation of one of the O-Ti bonds to result in the multi-site catalytic species in the polymerization system, and then broaden the molecular weight distribution. The existence of impurities may be another reason for the broad molecular weight distribution.

We have shown that the novel titanium complex containing a chelating phenol-alcohol ligand affords polyethylene with ultra high molecular weight. Although the reason for high molecular weight of polyethylene remains unclear, we assume the unique structure of the ligand plays an important role. Future work will be focused on the copolymerization of ethylene with various comonomers. And furthermore, effort will be devoted to the modification of the ligand to improve the catalytic activity and narrow the MWD of the polymer.