Abstract: The aim of the present study was to compare the antimicrobial activity of silver nanoparticle-polymer composites prepared by in situ synthesis of the silver nanoparticles within the polyvinyl pyrrolidone (PVP) hydrogel and by direct addition of the silver nanoparticles into the polymer matrix prepared using gamma radiation technology. The antimicrobial activity of the PVP-nanosilver hydrogels prepared with different concentrations of 30, 50, 70 and 100 ppm silver was tested against Pseudomonas aeruginosa, Staphylococcus aureus, Escherichia coli and Candida albicans. Hydrogels with 100 ppm nanosilver prepared by in situ reduction of silver resulted in about 3 to 5 log reduction in microbial counts after 3 hours as compared to about 2-log reduction with hydrogels prepared by addition of nanosilver. Comparison of the microbial reduction rates in the presence of two types of hydrogels have shown higher antimicrobial effects of nanosilver prepared by in situ reduction of silver by gamma radiation in the polymer matrix.

Polymeric materials containing metallic nanoparticles have attracted tremendous scientific and technological interest due to their potential applications in the field of optical, electrical, chemical, biological and medical devices [1, 2]. Nanoparticle-polymer composites are functional materials made through the combination of nanoparticles and polymer. Three dimensional network hydrogels are more suitable as templates for the production of nanoparticles than conventional non-aqueous or polymeric systems especially for biomedical applications, owing to their exceptional compatibility with biological molecules, cells and tissues. The combination of nanoparticles and hydrogels create synergistic, unique and potentially useful properties that are not found in the individual components. Properties imparted to the composites depend on the type of nanoparticles incorporated [3].

Polymers with silver nanoparticles have been identified as materials commonly used in biological and medical applications [4, 5]. Nanosilver particles are known for their antimicrobial properties and have been applied to wide range of healthcare products such as burn dressings, scaffold, skin donor and recipient sites, and medical devices [6]. Nanosilver is an effective killing agent against a broad spectrum of Gram-negative and Gram-positive bacteria [7, 8], including antibiotic-resistant strains [9, 10]. The combination of nanoparticles with polymers forming composites offers easier utilization of the antimicrobial activity of these nanoparticles.

Two general approaches can be employed for the preparation of polymer-metal nanocomposites depending on where the nanoparticles are synthesized- in situ by using the polymer matrix as the reaction medium and ex situ, meaning that the particle is synthesized before their incorporation into the polymer and in this way the matrix is just the dispersion medium. The present study was focused on the preparation of antimicrobial polymer-metal nanocomposites by two different routes using gamma radiation technology. Polymer polyvinyl pyrrolidone (PVP) as reaction medium for in-situ synthesis of silver nanoparticles and polymer PVP as a dispersion medium of pre-synthesized silver nanoparticles was used and the antimicrobial activity of PVP-nanosilver hydrogel composites prepared by the two methods was evaluated.

Hydrogel was prepared using aqueous solutions of 15% Polyvinyl pyrrolidone (PVP) of molecular weight 1,300,000. PVP hydrogels were prepared with 0, 30, 50, 70 and 100 ppm silver. Two methods for nanosilver incorporation were studied – in situ reduction of silver by gamma radiation and addition of nanosilver prepared by gamma radiation. Silver nitrate (AgNO3) at concentrations of 30, 50, 70 and 100 ppm silver was added to the PVP mixture. Radiolytic synthesis of silver nanoparticles within the PVP hydrogel was attempted. The hydrogel matrix was obtained by gamma irradiation induced crosslinking, while the in situ reduction of Ag+ ions was performed by strong reducing species formed under water radiolysis. The second method involved addition of nanosilver prepared with 0.3% alginate and gamma irradiation dose of 50 kGy to the PVP before irradiation. PVP nanosilver composite hydrogels were prepared by gamma irradiation at 25 kGy.

2.2. Characterization of PVP Hydrogels for in situ Synthesis of Silver Nanoparticles

The antimicrobial efficacy of PVP hydrogels containing different concentrations of silver nanoparticles was tested quantitatively by log reduction assay. Antimicrobial activity of nanosilver hydrogels prepared by in situ reduction of silver by gamma irradiation and nanosilver hydrogels prepared by addition of silver nanoparticles prepared by gamma irradiation to polymer before radiation polymerization was compared. Three bacteria Pseudomonas aeruginosa, Staphylococcus aureus and Escherichia coli were grown in nutrient broth medium and incubated aerobically for 24 h at 35°±2°C. Fungal culture Candida albicans was grown in soybean casein digest broth and incubated at 22°±2°C for 5 days. The inoculation was prepared as suspension representing 104 to 105CFU/ml. The silver nanoparticles incorporated hydrogels were immersed in soyabean casein digest broth inoculated with the test organisms. Control broths with inoculation and without hydrogels were also included. The broths were incubated with agitation and samples were withdrawn at specific time intervals. The solutions were serially diluted and plated for viable counts using soyabean casein digest agar medium. The plates were than incubated at 35°±2°C for bacteria and 22°±2°C for fungus, and colonies were counted. The number of surviving organisms was determined in the presence of PVP-nanosilver hydrogels prepared by the two methods with different concentration of 0, 30, 50, 70 and 100 ppm silver. Plates counts were measured in triplicate, and each experiment was repeated three times to obtain mean value of CFU counts.

The antimicrobial property of the hydrogels containing silver nanoparticles synthesized by in situ reduction of silver by gamma radiation and by addition of silver nanoparticles prepared by gamma radiation to polymer matrix before radiation polymerization was evaluated against various microbial strains using the zone of inhibition test. Test was performed using three clinically relevant organisms- Pseudomonas aeruginosa, Staphylococcus aureus, and Escherichia coli. Agar plates were evenly inoculated with the test organism. Pieces of hydrogels were placed on the inoculated agar plates. The zone of inhibition around the hydrogels was measured.

Synthesis of polyvinyl pyrrolidone (PVP) hydrogels was carried out by gamma irradiation. The presence of embedded silver nanoparticles within the gel macromolecular network was confirmed by UV–Vis spectral studies, using hydrogels of PVP with and without nanosilver. Fig. 1 depicts the absorption spectra of PVP-nanosilver hydrogel. The absorption spectrum of PVP-nanosilver composite hydrogel has surface plasmon absorption band due to the plasmon resonance effect originating from the quantum size of the silver nanoparticles with peak at 402 nm. 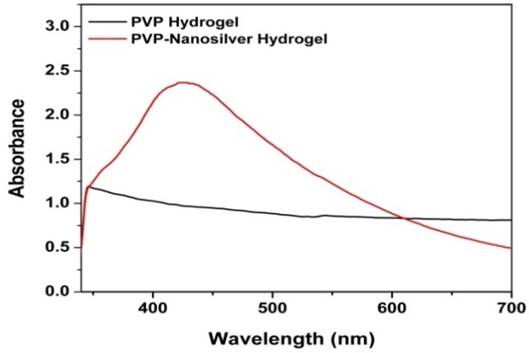 The surface morphology of PVP hydrogels and PVP-nanosilver hydrogels was characterized by Scanning Electron Microscopy (SEM). SEM images of the PVP-nanosilver hydrogels are illustrated in Fig. 2. Roughness in the surface of polymer impregnated with silver nanoparticles was observed. In order to confirm the presence of silver nanoparticles in the hydrogel samples, the elemental analysis of the hydrogels was done through energy dispersive X-ray spectroscopy (EDX) coupled to SEM. The EDX spectrum showed the presence of silver (Ag) in the PVP hydrogels. 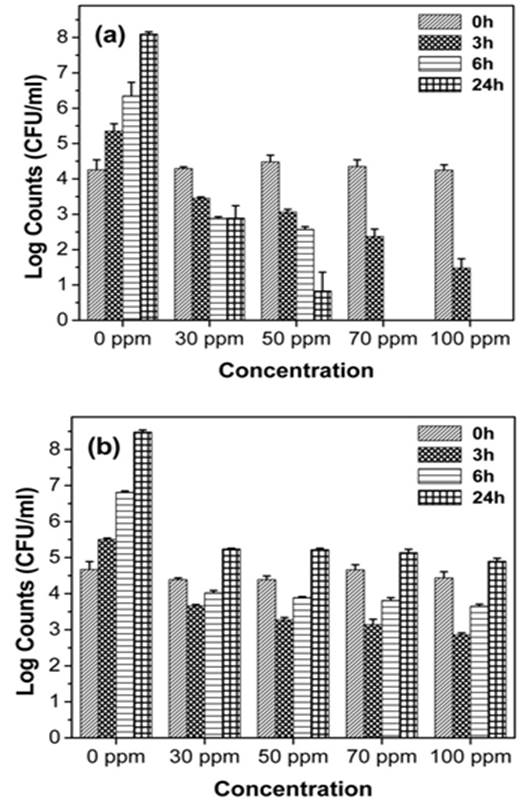 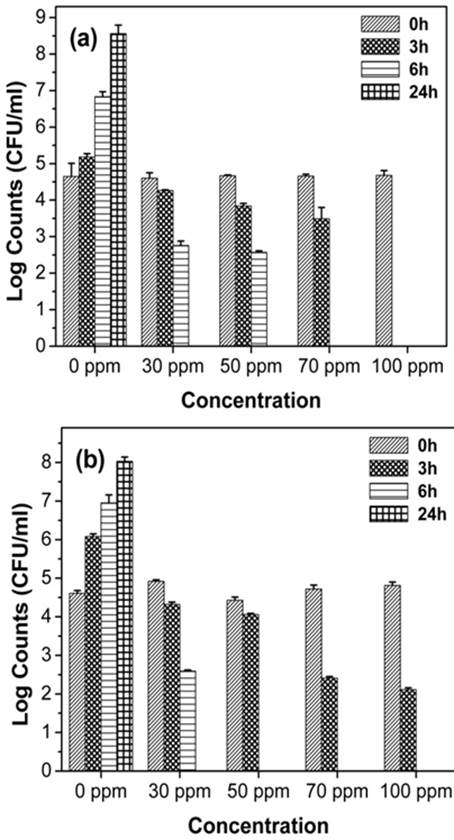 Fig. 5a presents the effect of PVP hydrogels containing 30, 50, 70 and 100 ppm nanosilver on E. coli. Strong microbicidal effect of the hydrogels prepared by in situ reduction of silver by gamma radiation was observed (Fig. 5a). No viable counts were detected after 6 hours of exposure with 50 to 100 ppm nanosilver.

Lower antimicrobial activity against the Gram-negative bacteria E. coli was observed with hydrogels prepared by addition of nanosilver as compared to hydrogels with in situ reduction of silver to nanosilver (Fig. 5b). Reduction in cell number was in the range of 50-71% after 6 hours of exposure. No viable counts were detected with 70 ppm and 100 ppm nanosilver after 24 hours of treatment. 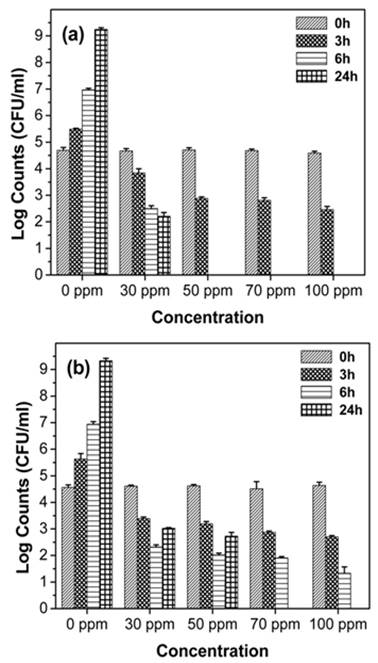 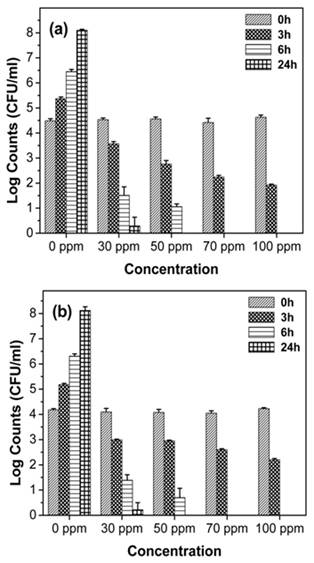 Hydrogels, which are a crosslinked network of hydrophilic polymers, have the ability to absorb large amounts of water and swell, while maintaining their three-dimensional structure. Hydrogels have received increasing attention in biomedical and biochemical application because of their permeability, biocompatibility and biodegradability. Polyvinyl pyrrolidone (PVP) is a synthetic polymer with good biocompatibility [11]. PVP is a water-soluble polymer and has been successfully used as hydrogel for biomedical application. Hydrogels using PVP were synthesized by gamma radiation technology in the present study and silver nanoparticles were incorporated in hydrogel network.

Irradiation is a useful tool to make hydrogels for biomedical applications [12]. Radiation reactions utilize gamma ray to excite a polymer and produce a crosslinked structure. The radiation crosslinking can be easily adjusted by controlling the radiation dose and is reproducible. There are no initiators or crosslinkers which may be harmful and difficult to remove. The hydrogel formation and sterilization can be achieved in one step. Rosiak and coworkers have reported hydrogel wound dressing by radiation crosslinking of polymers in aqueous solution [13]. Usually a dose of 25 kGy is applied in order to ensure sterility of the product [14]. Under ionizing radiation, PVP undergoes crosslinking to form transparent hydrogels with good biocompatibility [15]. Aqueous PVP solutions are permanently gelled when crosslinked by irradiation with gamma rays [16, 17]. PVP hydrogel has excellent transparency, biocompatibility, swelling capacity, ability to disperse different active compounds and have been applied as dressings for wound treatment such as burns and skin ulceration [18], drug delivery system [14] and in protein release [19].

Hydrogels have been extensively studied for dermal wound healing applications. Their advantages compared to other wound dressings are good mechanical properties, permeability to oxygen, fluid absorption, hydration of the wound bed, shape stability and softness similar to that of the soft surrounding tissue and cooling of the wound surface [20]. Depending on the state of hydration of the tissue, hydrogels can absorb or donate water to the wound environment. Hydrogels leave no residue, are malleable and improve reepithelialization of wounds [21]. The use of hydrogels to replace damaged tissues was the main incentive for their synthesis and investigation of antimicrobial activity. Hydrogels containing nanosilver can provide an excellent environment to wound healing; it can absorb exudates generated during the healing process, while protecting the wound from secondary infection [22, 23]. Several chemical and physical methods exist to prepare antimicrobial polymer-silver nanocomposites. The main fabrication approach is to disperse previously prepared silver nanoparticles in the polymer matrix. However, this often leads to the in homogeneous distribution of the particles in the polymer. Another approach is to prepare a system in which the silver ions are reduced to a zero valent state by a reducing agent.

In the present study, two methods for fabrication of PVP hydrogels with silver nanoparticles were used and the antimicrobial activity was evaluated. Silver nanoparticles synthesized by gamma radiation were dispersed in PVP matrix before radiation polymerization. Secondly, radiolytic synthesis of silver nanoparticles within the PVP hydrogel was attemped. The hydrogel matrix was obtained by gamma irradiation induced crosslinking, while the in situ reduction of Ag+ ions was performed using strong reducing species formed under water radiolysis. The radiolytic method is very suitable for generating metal nanoparticles in the solution. Radiolytically generated species, solvated electrons and secondary radicals exhibit strong reduction potentials, and consequently metal ions are reduced. The control of particle size is achieved by the use of capping agents such as polymers, which are present during the formation of metal clusters. Polymer molecules interact with the growing metal particles, inhibiting the aggregation process [24]. UV-Vis and EDX spectra confirmed the formation of silver nanoparticles in the hydrogel network.