Abstract: Applicability of a new piezoelectric limit sensor to detect premonitory failure during static loading testing is discussed in this paper. Brick masonry specimens were subjected to compression tests to evaluate their mechanical properties and to investigate proposed sensor response. These new sensors consist of a glass pipe containing piezoelectric film elements for the measurement of signals during static loading tests. The glass pipe can be installed directly in brick masonry specimens or inserted into the holder. For this research, a brass tube holder was made. This report discusses examinations for glass pipe alone and glass pipe with brass holder.

Brick walls of masonry structures are apt to be unstable because of major earthquakes or aging degradation. We propose a simple monitoring system using a piezoelectric limit sensor for simple quantitative evaluation of damage status and change of stress and strain in brick walls of masonry structures by vibration measurement [1][2]. Many unreinforced masonry buildings throughout the world have not been designed to resist loads caused by earthquake or by sudden gravitational loading. Therefore, a major earthquake might demolish most such buildings, causing numerous casualties and bringing about huge losses destroying greater parts of cities and villages [3]- [7]. 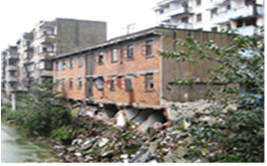 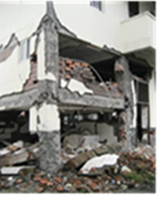 Reinforcement of masonry buildings, including remodeling, is both important and necessary to avoid losses from catastrophic events. Nevertheless, in economically developing countries, few masonry structure specialists are available. Moreover, procuring proper materials for reinforcement is extremely difficult.[3]–[6] Figure 1 presents photographs of collapsed brick walls in Sichuan Province, China, taken immediately after a M7.9 earthquake occurred at 14:28, May 12, 2008, as reported by the US Geological

Survey (USGS) [7]. This report describes a simple sensor that is useful to monitor initial signs of destruction in structures and their dangerous state immediately before complete destruction, which are difficult to identify by vibration measurements with currently available measuring devices. The sensor was produced using simple and cheap sensors and PC technologies.

To prevent the problems explained above, reinforcement of the building of brick bond masonry structure, including the reconstruction, is extremely important. It might be done by compression testing in a vertical direction.

3. Details of Sensors and Their Setup and Measuring Procedures

In the brick wall of masonry structure, brick and mortar are applied one after another. This structure of missing homogeneity is weak in the bonding plane of different materials. Consequently, the weak strength at the bonding plane of brick and mortar makes the brick wall of masonry structure break at stress that is less than its member materials can withstand. 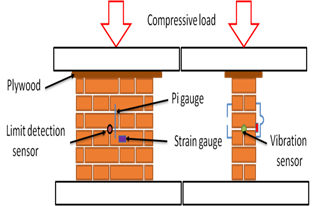 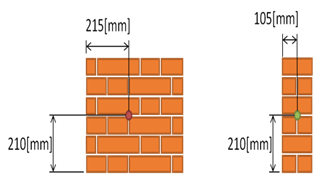 Fig. 2. Location of the sensor unit. 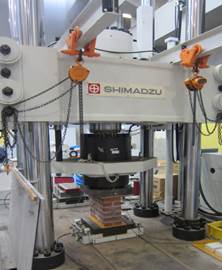 Figure 3 portrays the compression testing machine (UH-5000kN I; Shimadzu Corp.) we used. Table 1 shows its specifications. We prepared two each of Flemish bond and English bond specimens for destruction testing. Then we set up sensors for specimens of these two types with different brick stacking patterns. We drilled f15 holes in the front surfaces of these four specimens to insert sensors. Professional technicians stacked brick wall specimens for our quantitative measurements. Figure 4(1) presents details related to the piezoelectric limit sensor; Fig. 4(2) shows sensor setup patterns. When the sensor detects a load exceeding its limit by static loading, the piezoelectric film in the sensor deforms to generate a voltage. Because the sensor generates voltage proportional to deformation, we can estimate the scenario of destruction from its voltage output. The Pi gauge was fixed to the specimen by a bolt and a nut. The strain gauge was affixed to the specimen using adhesive and fixed to the specimen surface by mortar together with the piezoelectric limit sensor after it was inserted into the hole located in the center of the front surface. Sensors were wired to a high-performance memory logger (LR8431; Hioki E. E. Corp.) with a covered f 4-mm-diameter and 2-m-long lead wire. The cover of the wire provided proper electric insulation.

The two Pi gauges (LR8431; Hioki E. E. Corp.) were fixed using a bolt (planted on the brick surface) and a nut on each front and rear surface of the specimen. Furthermore, we put a strain gauge (PFL-20-11-3L; Tokyo Sokki Kenkyujo Co. Ltd.) around center of front surface of specimen using adhesive and used it as an auxiliary sensor. Signals from these sensors were stored in the logger as time-series data. The sensor sampling frequency was 100 Hz. That for gauges and compression loads was 1 Hz. 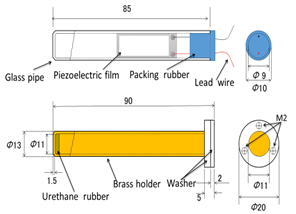 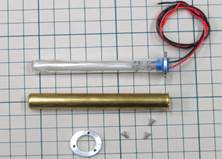 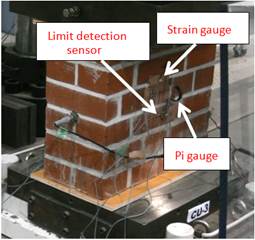 We evaluated the strength of two bonds of brick. To find the difference of strength between Flemish and English bonds, we examined the relation between loading and average deformation in the specimen. As the average deformation, we used the arithmetic mean of two compressive deformations detected by two Pi gauges attached on front and rear surfaces of specimens. This value divided by 140 [mm] of the effective Pi gauge length provided the mean strain. The calculation is shown below.

In that equation, δavr signifies the average compressive deformation, δ represents the sum of two deformations, εm stands for the average strain, and l is the effective Pi gauge length.

The average compression load and compressive stress at complete destruction in brick wall of masonry structure of the Flemish bond were about 3300[KN] and about 32 [N/mm2], respectively. Although in the brick wall of the masonry structure of the English bond, they were about 3450 [kN] and about 33 [N/mm2], respectively. For general evaluation of brick wall of masonry structure, people seem to expect better strength from the English bond than from the Flemish bond.[9] Our tests showed performance supporting that opinion. In design determination of safety load, people consider that about one-third of the destruction load might not cause any structural damage. These are calculated as shown below. 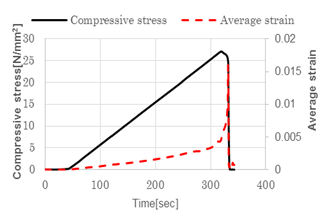 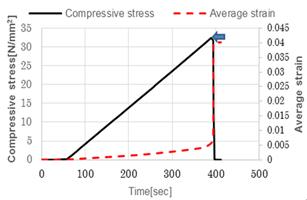 Although the maximum load and stress at destruction were about 3,105 [kN] and about 30 [N/mm2], respectively, for the Flemish bond and about 3,429 [kN] and about 33 [N/mm2] for the English bond. Therefore these experimental values compare well with the calculated ones presented above.

Figure 6 shows the output of piezoelectric limit sensor and compressive stress. Figures 6(1) and (2) are for the Flemish bond and (3) and (4) for the English bond. We compared the calculated maximum compressive stress with the sensor output. We defined three symbolical quantities: (1) stands for compressive stress when destruction started, (2) when danger of destruction is predicted, and (3) when finally destroyed. The evaluation of experimental data on these items is described below. 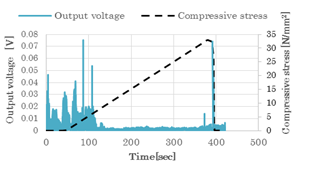 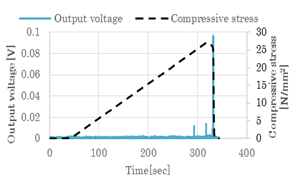 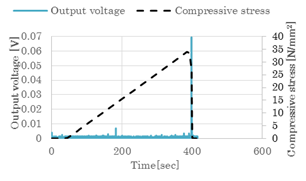 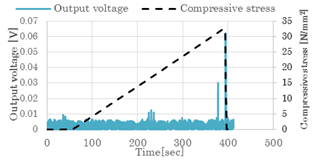 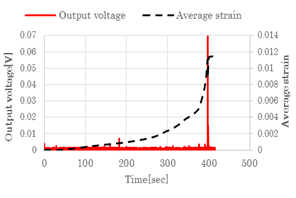 Figure 7 shows output of the piezoelectric limit sensor and average strain. Figure 7(1) is for the English bond specimen and sensor in the brass holder. The sensor output is shown as a solid line. (1) occurred at 180 [s], (2) at 380 [s] and (3) at 400 [s], each with typical signal pattern. The strain is shown as a broken line, which indicates the escalation of strain synchronized with sensor output. Warning of destruction by arrival of (2) was done at about 60% of average maximum compressive stress.

We proposed a simple monitoring system using a piezoelectric limit sensor for a brick wall of a masonry structure. We examined its performance in comparison with that of traditional system measuring static compressive stress versus strain, obtaining the results presented below.

(2) A piezoelectric limit sensor inserted into a brick wall of a masonry structure might warn of danger from increasing deformation before complete compressive destruction.

In conclusion, our system incorporating this sensor and analytical devices can detect changes of static loading and abnormal deformation in structures quantitatively. It can function as a health monitoring system for structures. After improving its reliability, our system can be widely used to ensure the strength and safety of brick walls of masonry structures in countries, and particularly in economically developing countries.

This research was partially supported by JSPS KAKENHI Grant Number 25242033, for which we express our appreciation.