Abstract: In each stage of any satellite design cycle, it is required to have test system that verifies the operational functions of each satellite subsystem and the integration operation among the satellite subsystems. Usually, these test systems consist of many hardware’s and these hardware’s are very complicated and occupied large space. The first Egyptian satellite, Egypt Sat-1, has a test center; a place where the satellite integration test sequences are carried out. This center consists of complicated hardware. In this paper a new trend, using LabView tool with National Instrument (NI) chassis, is used to build a satellite test center (STC) prototype that reduce the cost, complexity and occupied area of the STC. So the new trend tests the ability to replace the Egypt Sat-1 test center. The results of this paper shows that the quality of the new trend compared to the existed Egypt Sat-1 test center.

The Satellite Test Center (STC) of Egypt Sat-1 satellite consists of control machine that initiates and performs all test programs, checkout equipment (CoE) for each subsystem on the satellite and a satellite mockup. Each CoE performs some functions to implement and analyze the test program contain complex hardware that need in order complex data exchange and interface among CoE and the control machine.

A new implementation of STC using LabView tool with less hardware is proposed in this paper which performs the same functions of the Egypt sat-1 STC but with less complexity, development time, and cost within small area.

For simplicity, the control machine (ITM) will be implemented to perform the same functions as the  configuration control console (CCC) that in Egypt Sat-1 STC. To verify the proposed STC; Payload, Power, Telemetry control (TC) CoE’s will be simulated using LabView tool in addition to a satellite simulator. Each subsystem will be implemented using LabView program running on NI machine.

The concept of the proposed STC is to make integration test among satellite simulator and Check Test Equipment CoE’s under the control of ITM as in figure 1, i.e. the ability to replace the existing engineering model by the proposed STC system. 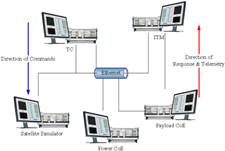 • TCP/IP, to transfer the commands between TC and satellite simulator.

• FTP, to transfer Telemetry file from satellite simulator to ITM.

• Reflected Memory Card, to adjust the synchronization among the whole system parts and to transfer the image from satellite simulator to Payload CoE.

ITM is the main part of the Satellite Test Center (STC), which is used for managing and monitoring of complex integration test (CIT) before, during and after the test program. Figure 2 illustrates the flow chart of ITM sequence operation. 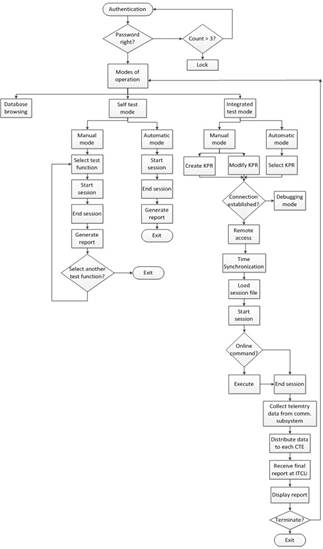 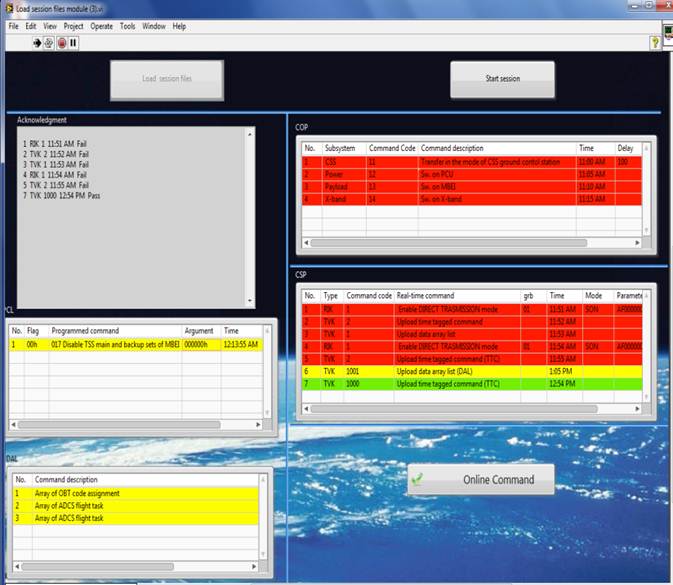 The main function of the Payload CoE is to receive a pre-stored image in the satellite simulator to analyze, verify and compare this with the one stored in it. The verification of the received image is depending on the comparison result of the two images, and the comparator factor is the resolution. Figure 4 illustrate GUI of the Payload CoE. 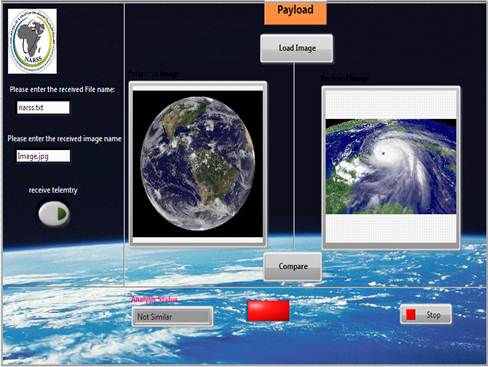 The simulation of the power subsystem is divided into two parts; Solar Array and Battery.

The symbols are defined as in Table 1.

The selected functions of solar array simulator can be described as following;It Simulate Charging and discharging of the battery, representing battery current ,Volt & temperature, send this values instantaneously to Power CTE ,it shows where battery charging or discharging and if it is ready to used or not, create telemetry file(TDMS) and send it to power CTE using FTP.

A NiCd battery is simulated with the following characteristics; Range of CB operational voltages: 24-34, Number of CB used: 1, Range of temperature: -5 to +50ºC [3].

In Figure 6, a portion of GUI that represent power subsystem. 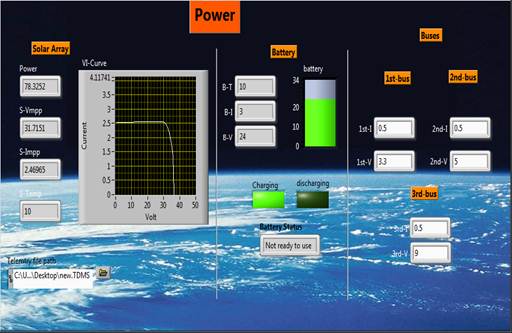 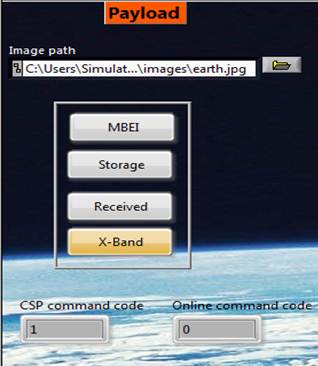 In this paper a new trend that using LabView program running on NI machine is used to implement satellite test center prototype with less hardware, development time, manpower and cost. From the results it is found that the new trend capable of replacing the existed STC. As a prototype, one subsystem is completely implemented (ITM) and the other test center subsystems are simulated with some of its functions and from the session that done and the results, it is found that the proposed STC is work properly.