Since 2000, worldwide energy consumption showed growth trend, with an average growth rate of 2.44%, except for negative growth in 2009 (-1.22% compared to 2008). Global primary energy consumption increased by 2.3% in 2013. The total reached 12730.4 Million tons oil equivalent, with a main contribution from China (22.41%), US (17.8%), Russia (5.49%), and India (4.67%) [1]. Meanwhile global carbon emissions were also growing, with an average growth rate of 2.54%, except for negative growth in 2009 (-1.51% compared to 2008). By 2013, global carbon emissions have achieved 35.09 billion tons, with China (27.1%), US (16.9%), India (5.5%), Russia (4.9%) and Japan (4%) as the most producers [1]. Figure 1 shows the corresponding growth of energy consumption and chart carbon emissions. As can be shown in Figure 1, energy consumption and carbon emissions were positively correlated. And China has the highest number of energy consumption and carbon emissions. Though China's economy has made a rapid development, it also wasted too much resource and polluted environment badly. The efficient use of resources and carbon emissions reduction become problems confronted and concerned by the Chinese government. The Chinese government has made a solemn commitment to cut the CO2 emissions per unit of GDP by 40%-45% by year 2020 off the year 2005 level at the Copenhagen Conference [2]. According to China's 12th Five Year Plan (12-5YP), the goal is to lower CO2 intensity by 17% by 2015 from the 2010 level [3]. However, it’s hard to achieve the goal, given that Chinese carbon emissions continue to grow. 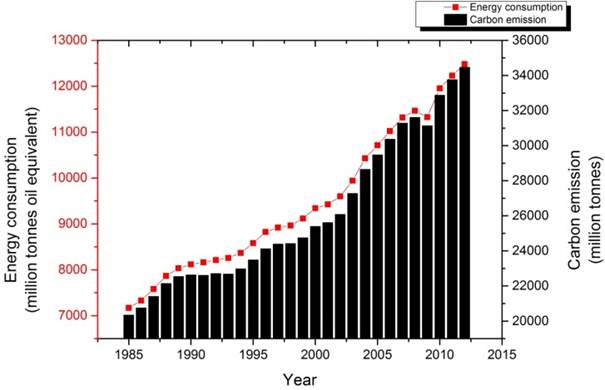 Figure 1. The world's energy consumption and carbon emissions from 183 to 2013.

The power sector consumes a huge amount of fossil fuel with bringing a large amount of greenhouse gas emissions. According to the US Environmental Protection Agency (EPA), electricity is the largest single source of CO2 emissions in the nation, accounting for about 38% of total U. S. CO2emissions in 2012 [4]. In China, the electricity sector consumes approximately 50% of the coal and emits 40% of the CO2 from fossil fuel combustion [5]. Controlling the carbon emissions in the power sector plays a key role in curbing China’s carbon emissions, considering that by 2020 China's carbon emissions will be still mainly affected by the power industry [6]. Power plants in China are mainly thermal, burning fossil fuels, which emit a great deal of pollutants and greenhouse gases. In fact, the annual power generation from coal accounts for more than 70% of the total generating capacity. Thus, in order to reduce carbon emissions from the power industry, the power generation from less coal and more clean energy is needed. Hydroelectric power, reducing environmental pollution, has played a prominent part in the electrification phase of the industrialization process [7]. In spite of rapid development in China, the further development of hydropower is still restricted due to unevenness of precipitation distribution [8] and increased methane and CO2 emissions from the lake because of deeper water and slower flowing speed after the emptying of reservoirs [9]. Many issues also exist in popularization of large-scale wind energy and solar energy. For example, wind power grid-connected of wind power turbine [10]. Moreover, wind power plants are located in the places where grid investments are insufficient, electric power construction is lag, the electric energy transmission is difficult. So, as a result, the local consumption demand is satisfied and electric energy is no longer needed. The solar photovoltaic industry faces many problems, such as severe overcapacity of PV, market immaturity, lack of matching network planning and financing difficulties [11]. Worse still, wind power and solar energy quality, including wind speed, blowing rate, the amount of light and radiation intensity, all change with climate variation, which can’t ensure grid stability. Other new energy sources, such as geothermal energy [12], biomass energy [13], tidal energy [14], due to restrictions or imperfections from capital, technology, policy, and other factors, are still in start-up and immature phase, which can’t be scaled up to wide use currently.

2. The Development of China’s Nuclear Power

Nuclear power industry originated in nuclear energy for military application [19], which is a great epoch-making event in the history of the world's energy. China has an approximately 70-year-old history of nuclear development. In 1956 the State Council of China began to focus on the peaceful use of atomic energy. The preparation of graphite cooling heap and relative research on nuclear power were implemented in 1958 [20]. Specific and further research on nuclear power, including reactor type, security, operation and location, were carried out during 1977 to 1984. And National Nuclear Security Administration (NNSA) and Ministry of Nuclear Industry were also established during that period [21]. Then China's nuclear power industry got initial development. Qinshan Nuclear Power Plant started construction in 1985, which closed the non-nuclear chapter in mainland China. Advanced international technologies were introduced to build nuclear plants from 1987 to 2003, such as Daya Bay plant (French technology), Qinshan Phase III (Canadian technology) and Tianwan Phase I (Russian technology). However, due to the Chernobyl disaster and poor domestic technology, massive growth of nuclear power in China failed to appear with merely six nuclear power stations constructed. Fortunately, China's nuclear power industry had a good developing time during 2004 to 2011, with fourteen nuclear-power plants built. Nuclear power in China, by the end of 2011, reached the total installed capacity of 12.55 million KW, with twenty nuclear reactors and fourteen commercial operation units [22]. Given public concerns about safety caused by the Fukushima nuclear disaster, environmental protection and safety performance in China’s nuclear power industry were re-evaluated. And the proposed projects have been languishing, without restart so far.

Despite of late start and slow development, China’s nuclear power industry still acquires some achievements during 1985 to 2014. And the corresponding development process has been shown in Figure 2 and Figure 3. 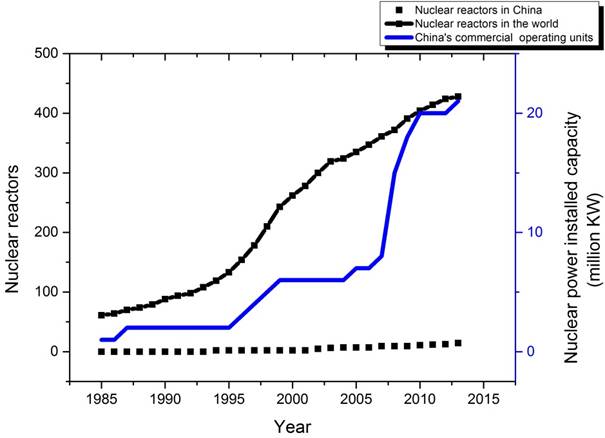 Figure 2. The number of nuclear reactor and commercial operating units in China from1985 to 2013. 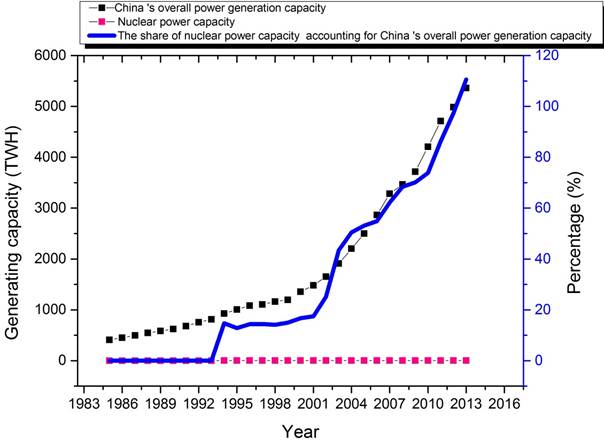 Figure 3. China’s nuclear power capacity and the corresponding percentage of the total capacity from 1985 to 2013.

2.2. The Status Quo of Nuclear Power in China

Its share of the total generating capacity is very small, despite of the increasing installed capacity and annual energy production of nuclear power in China, with the maximum only 2.29% in 2003 and only 2.06% in 2013. The proportion of all kinds of energy and corresponding generating capacity in mainland China in 2013 has been shown in Figure 4. 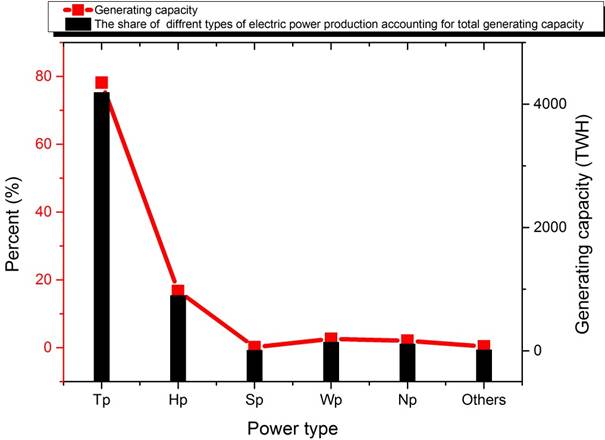 Figure 4. The proportion of all kinds of energy and corresponding generating capacity in mainland China in 2013.

As can be shown in Figure 4 (note: Tp refers to Thermal power, Hp refers to Hydroelectric power, Sp refers to Solar power, Wp refers to Wind power, Np refers to Nuclear power), nuclear power's share is weaker than wind power’s, with the thermal power topping the list, followed by the hydropower. Some factors listed as follows may explain that. (1) Rich coal resources, mature construction and transform technology can reduce the generation cost in a thermal power station; (2) With abundance of water resources and lower technology barrier compared with nuclear power’s, the Chinese government put more money and energy into the hydropower stations which also can prevent drought and flood; (3) Wind power grew at 8 percent a year during 2006 to 2011, thanks to the promulgation of the "Renewable Energy law" which present the cost compensation for renewable energy sources.

In spite of a huge gap in generating capacity, nuclear power in mainland China has a great potentiality and good perspective. The reasons for that are listed as follows. (1) According to Wei [23], vice president of the China electricity council, coal-fired power plants will not add by the 2030, which means added new electricity demands has to be met by other energies; (2) The thermal power in China is facing dual challenges to reduce carbon emissions and to lower the cost having climbed to 1.0302 CNY/kwh [24]; (3) The broad development of hydropower in China left less available water resources. And the ecological damage during hydropower construction and the rising cost hinder jointly sustainable development of the hydropower [25]; (4) Given core technologies relying on imports, development program not matching with power system planning, the solar and wind power fail to supply stable and sufficient electric power; (5) Due to the lack of reasonable industry planning and policies support, and lag of technologies, China's geothermal resources [12] and bioenergy [13] won’t achieve massive growth. Consequently, it’s urgent and necessary to develop nuclear power. 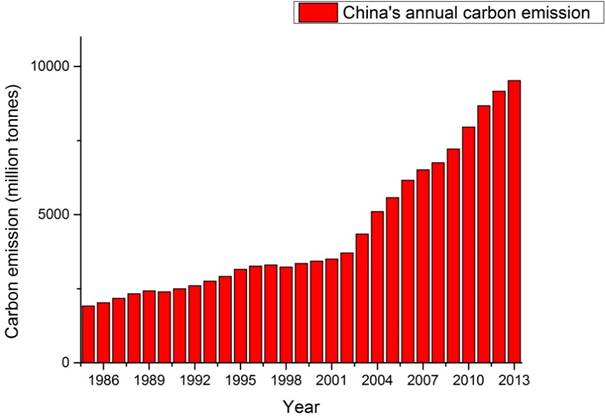 As can be shown in Figure 5, carbon emissions in china have risen from 3429.9 million tons in 2000 to 9524.3 million tons in 2013, with continuous rising and an average carbon emissions growth of 7.84 percent a year. From the perspective of the growth rate, it sustained the growth during 2000 to 2004, with the peak appearing in 2004 when it reached 17.44%. The reasons for that are listed as follows. Firstly, since 1998, in response to the Asian economic crisis, the Chinese government implemented a proactive fiscal policy to expand domestic demand, which brought economic recovery in 2000 and 2001. Then, the Chinese government established the long-term policy of stimulating domestic demand and Implemented expansionary fiscal policies, which contributed to fully stimulating economic growth and to increasing further carbon emissions [26]. However, the decoupling between GDP and carbon emissions happened during 2005 to 2008 [27], which showed GDP growth was rising with the decreasing rate of carbon emissions at the same time. Some key factors, including energy consumption structure adjustment and rising energy efficiency brought by improving energy saving technology and the upgrading industrial structure, can explain that. And since 2008, the decoupling disappeared. Moreover, China’s carbon emissions growth rate declined rapidly from 10.25% in 2010 to 3.91% in 2013, which benefited from the Eleventh Five-year Plan [28] and the "twelfth five-year" plan for energy efficiency and emission reduction [29]. Given the rapid declines of carbon emissions growth rate and in-depth and detailed emissions reduction measures, it’s the best time to further reduce the carbon emissions by building more nuclear plants, which will eventually realize the carbon reduction target put forward at Copenhagen.

[31]. We can draw a conclusion that the potential for carbon reduction of nuclear power is still great.

In order to calculate the carbon reductions from China’s nuclear power, ACM0002 algorithm in literature [32] is adopted in this paper. ACM0002 can be described as formula (1).

is the CO2 emission reduction of nuclear power generating units in the ith year,

is the generated electrical energy of nuclear power generating units in the ith year,

is the nuclear power generating units instead of grid electricity baseline emission factor,

is the OM emission factor,

is the BM emission factor.

is the simple operating margin CO2 emission factor in the ith year,

is the consumption of m which is the fuel in power system in the ith year,

is the net heating value of m which is the fuel in power system in the ith year,

is the CO2 emission factor of m which is the fuel in power system in the ith year,

is the electric quantity that power systems provide to the grid in the ith year, m is the whole fossil fuel consumed in the grid, I is the last three years of data,

is the BM emission factor in the i year,

Thus, we can obtain the EF (the nuclear power generating units instead of grid electricity baseline emission factor). In order to calculate the electricity generated by nuclear plants in regional power grid, appropriate method is applied in this paper.

is the electricity generated by nuclear plants in regional power grid in the ith year,

is the installed capacity in regional power grid in the ith year,

is the available hours in the ith year.

According to literature [33], this paper assumes

. Then the electricity generated by nuclear plants and CO2 emission reduction in corresponding regional power grid can be calculated which are shown in table 4. 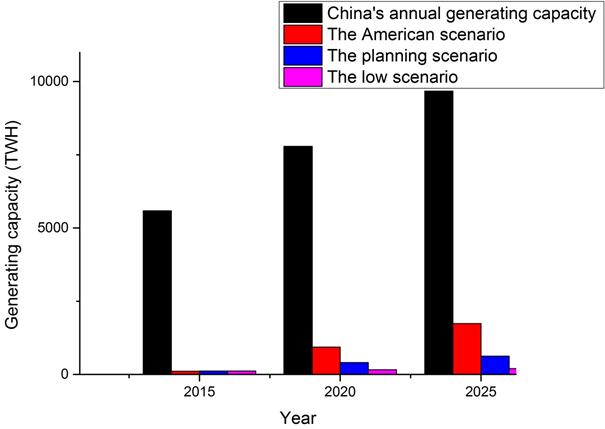 Figure 6. China's nuclear power generating capacity in the future under the three scenarios.

Thus, China's nuclear power reduction potential under the three different scenarios from 2015 to 2025 can be obtained based on the average OM and the EM during 2009 to 2013, which is shown in table 5.

By the analysis of China’s nuclear power reduction potential under three scenarios, the American scenario gives a huge amount of carbon dioxide reduction. The CO2 reduction in American scenario estimated to be approximately 2.78 times and 8.74 times respectively as compared to the Planning scenario and Low Speed scenario by 2025.

Project supported by the Fundamental Research Funds for the Central Universities (No.2015XS27), the National Nature Science Foundation of China (No.71271085).