Total Knee Arthroplasty (TKA) is a successful procedure with long-term durability. Overall, survivorship is 91% at 10 years, 84% at 15 years, and 78% at 20 years. TKA is considered one of the most successful health care interventions for end-stage arthritis of the knee. Successful total knee arthroplasty results in pain relief, knee function improvement and improved quality of life.1,2

The number of patients undergoing TKA surgery has been continuously increasing and has displayed a higher proportion of female patients. In a study of more than 48,000 Canadians aged 55 years and older, the number of individuals with the potential need for hip or knee arthroplasty was estimated to be 44.9 per 1,000 women and 20.8 per 1,000 men. 3Women typically represent approximately 60% of patients undergoing TKA. 4, 5 ,6

Women dominate both the population that needs TKA and the currently treated patient population. Thus, there is a strong rationale for evaluating female-specific knee requirements based on sex differences in joint anatomy and kinematics. 7

Morphological data indicate that women tend to have narrower medial to lateral dimension of femoral condyle for any given anterior to posterior dimension. Q angle is significantly greater in female population than in male population. The anterior femoral condylar anatomy is more pronounced in male knees.

The recent introduction gender-specific knee arthroplasty implants was a new approach to the ongoing trend across TKA systems to offer more sizing options and is based on the anatomic differences between male and female femurs. Rather than simply offering more sizes with similar AP to ML ratios, the gender-specific component is designed to better accommodate the anatomic differences noted in females with a narrower ML dimension for any given AP dimension. In addition, the angle of the trochlear groove was increased and the anterior flange thickness was reduced to better match the native female anatomy. 7,11,12

This gender-specific implant has theoretical advantage over standard TKA implants, whether female patients can benefit from this system is under debate. Thus, we conducted this study to evaluate the early clinical outcomes between two implants.

The mean age of two groups of patients included at the time of surgery was 63 years old (range from 50 to 72 years), 21 right knee replaced, 19 left knee replaced , while 6 patients had bilateral total knee replacement 1 of them were done bilateral simultaneous at the same setting.

Medial parapatellar approach was used in all cases. Bone cuts were performed in a standard manner with the distal femoral and proximal tibial bone cuts perpendicular to the mechanical axis in the coronal plane. The proximal tibial cut incorporated a posterior slope of approximately 7 in the sagittal plane.

After cutting distal femoral cut, we re-checked femoral sizing to choose the correct size of femoral prosthesis that avoids mediolateral verhanging. In cases with standard prosthesis , After measuring anteroposterior size of the distal femur , we checked mediolateral size of the trial prosthesis , and if it was obvious overhanging medially we moved to the smaller size femoral component ( downsizing), so we had no patient with mediolateral overhang and accepted mediolateral underhang in a in about 20 % of standard group prosthesis. In cases with gender specific prosthesis we observed no overhanging of any case when using trial component of the correct size, but observed undercoverage in upto 70 % of gender specific group.

If downsizing was required based on intraoperative assessment that the desired femoral component was too wide, additional posterior resection was performed. In most cases, some compromise was required and included the surgeon’s assessment of the extent of the overhang, flexion and extension gap balance, and remaining anterior bone that could be resected before producing a notch.

In the current study, we found that the early clinical outcomes for the knees with a gender-specific NexGen LPS-Flex prosthesis were similar to those for the knees with a standard NexGen LPS prosthesis. In both groups, female patients had improved quality of life in terms of pain, range of motion of the knee , walking distance, deformity correction , OXFORD , KSS ,KSS-F , WOMAC scores, and function after total knee arthroplasty. We also found negligible differences in terms of patient satisfaction and preference between the two prostheses in five bilateral cases.

Femoral component undercoverage of distal femur in mediolateral dimensions was observed in anteroposterior view of some cases of first group. (fig -3) 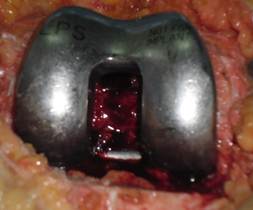 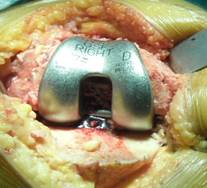 Fig. 2. Gender-specific prosthesis trial showing under coverage of medial side. 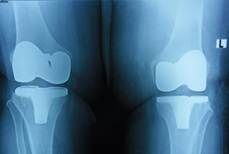 Figure 3. The femoral component of the gender-specific prosthesis appears to be undersized( left side).

A NexGen gender-specific femoral component (Zimmer gender-specific NexGen LPS-Flex) was designed with a narrow mediolateral dimension for a given anteroposterior dimension to more closely match the aspect ratio in the knees of female patients. The anterior flange of the gender-specific femoral component was modified to include a recessed patellar sulcus and reduced anterior condylar height (to account for a less pronounced anterior condyle in women) and a lateralized patellar sulcus (to accommodate the increased Q angle associated with a wider pelvis).7,12

The need for gender-speciﬁc knee arthroplasties is based on the following assumptions:

(1) women have results that are inferior to those of men after TKA, and

A number of clinical studies have refuted the idea that women have worse outcomes than men using traditional total knee designs. 13,14,15,16 In fact, some studies have found that women achieve essentially the same results as men, or even better .14,17,18

A recent study showed that the shape of the knee is not only dependent on gender, but also on the morphotype of the patient .19

However, these anatomical differences may be so small that have no clinical effect, which would agree with the findings of the present study.

Cheng et al conducted systematic review and meta-analysis of the current literature up to January 2013, they performed an electronic and manual search of of all available current world literature related to results of TKA to evaluate difference between gender specific and standard unisex TKA .

They included 846 knees, in which 423 female patients had bilateral TKA with a gender-specific prosthesis in one knee and a standard unisex prosthesis in the contralateral knee.

Results of 6 mentioned studies are in general similar to results of current study as they found no statistically significant differences were observed between the 2 designs regarding pain improvement, range of motion, knee scores, satisfaction, preference, complications,and radiographic results.

One of the main design features of gender-specific knee is reduced anterior flange thickness to decrease prevalence of Overstuffing of the patellofemoral compartment.

Overstuffing of the patellofemoral compartment may be associated with pain and reduced ROM. The use of a standard TKA could possibly lead to overstuffing because of a less prominent anterior condyle in the female knee.

Despite the fact that reduced height of the anterior flange and the deeper trochlear groove would help to prevent overstufﬁng of the patellofemoral joint and improve patellar tracking in the gender- specific design, current study showed similar postoperative pain and ROM when comparing the two knee prostheses.

Another design feature of the gender-specific prosthesis is the trochlear groove angle of the femoral component, which is increased by approximately 3 degrees in order to replicate the distinct Q angle difference, thereby enhancing patellar tracking and reducing the need for lateral retinacular release. In the current study, the patellar tilt angle did not differ significantly between the two groups either preoperatively or postoperatively. No knee in either group had subluxation or dislocation of the patella or underwent a retinacular release.

One of the main design features of gender-specific knee is modified mediolateral dimensions to better accommodate distal femoral morphology of female femora.

In the group with a standard implant, the mediolateral and anteroposterior measurements closely approximated the distal femoral morphologic data for fifty-one knees (60%). Ten knees (12%) had an overhang (1 to 3 mm), and twenty-four knees (28%) had an underhang (range, 1 to 2 mm).

Tanavalee et al.27 intraoperatively evaluated the overhang of the cutting block on the posteromedial edge of the femoral condyle. They found that the overall percentage of gender-specific prosthesis selection was higher in female patients than in male patients. This phenomenon frequently occurs in medium-sized to large-sized female patients. The medial or lateral overhang of unisex prostheses was worse in female knees than in male knees.28 Yan et al. reported a higher prevalence of prosthetic overhang in women with standard unisex knee prostheses.29

Consistent with these findings, current study showed that gender-specific design reduced medial or lateral overhang in female patients whereas there was a higher prevalence of underhang than with unisex prostheses. current study result is consistent with results of Kim et al. 2010a,b, Kumar et al. 2012, Thomsen et al. 2012 regarding fit of femoral component to distal femur .

Although a Mahoney and Kinsey 30 study confirmed that femoral component overhang may create postoperative pain due to soft tissue irritation and soft tissue imbalance, results of previously mentioned studies suggest that the difference in condylar coverage does not affect pain scores and knee function.

Based on these contradictory results, the question remains whether the modifications made to the gender-speciﬁc design are extensive enough to closely match femoral anatomy in female patients and offer any clinical advantages.

Theoretically, the higher incidence of underhang in the gender-specific group, which exposed more cancellous bone than with the NexGen standard prostheses, could be a source of higher perioperative blood loss and may induce increased ostolysis from wear debris with longer follow-up. 8,21,22

It was observed that with standard prosthesis in about 20 % of female cases , surgeon either accept mediolateral overhanging with its potential soft tissue irritation and post operative pain or downsize femoral component with its potential over resection of posterior femoral condyles , flexion-extention mismatch and mid flexion instability .

With gender-specific knee, in most cases (about 70 %) surgeon must accept mediolateral undercoverage (varying from 2 to 10 millimeters) when using correct anteroposterior size. Gender-specific prosthesis better restores the quadriceps (Q) angle and better restores size of anterior femoral condyles of female patients which is more prominent in males than females.

Its recommended either to provide gender specific prosthesis with wider medio-lateral dimension for middle east and African females or provide standard prosthesis with variable aspect ratios for each antero-posterior size to overcome the problems of medio-lateral overhanging or undercoverage which is expected to achieve better matching in all cases.

There may be a future solution for these mismatching problems by future development of patient specific instruments and patient specific implants depending on accurate analysis of preoperative computerized images.

Almost all prosthetic implants have been designed and manufactured to accommodate the knee anatomy of Western Caucasians. Anthropometric studies for distal femoral anatomy of Egyptian patients are needed to establish refrences for normal aspect ratio, distal femoral rotation and proximal tibial sizes, slope and rotational alignment which proved to show racial, ethnic, gender and individual differences.