Muscular Power and Endurance in Young Competitor and Recreational Fencers

Two analysis levels allow to study metabolic demand in fencing competitions. At a macroscopic level, the duration of a national fencing competition can range from 6 to 9 hours per day during two days. This specificity puts demands on the aerobic process, particularly for those who compete to final bouts [1,2]. At a lower level, during a bout, from 3 to 9 minutes, fencers repeat defensive and offensive patterns with repetitive forward and backward motions with numerous changes of direction [1,3]. These displacements need short and frequent sequences of high intensity exercises putting high demand on the phosphocreatine process. These displacements are spaced by low intensity activity allowing recovery periods [3].

When in competitions, fencers must keep intact their phosphocreatine system faculties to meet the challenges of final bouts. Otherwise, high intensity exercises require the glycolysis system which is the third process to provide the metabolic capacity to generate ATP for muscle activity [5]. This anaerobic process re - synthetizes ATP producing lactic acid. When the accumulation of lactic acid in muscle and blood reaches a very high level, fatigue will occur [4]. Competitor fencers need to avoid this process to diminish risks of muscular fatigue and a decrease in cognitive activity [6]. Indeed, as with any combat sport, fencers have to perform simultaneously a physical task with great physical exertion and perceptual or decisional tasks [7]. In the situation of playoff bouts, physical or cognitive fatigue could be a disadvantage.

Even though aerobic and phosphocreatine systems seem necessary to succeed, their combined association appears to be crucial in competition. The relationships between maximal strength and muscular endurance in fencers - which are the expression of these physiological processes - have to be specified in order to assess the consequences of practicing in competition as opposed to recreational practice. Therefore, our study aims to explore this relation and to search for a possible correlation between these two processes in young fencers involved in competition and in young recreational fencers.

This study was done in accordance with the Helsinki Declaration and has been approved by the local ethics committee.

Thirty two fencers (males; age: 15. 59 ± 1. 76 years; weight: 60. 53 ± 9. 01 kg; height: 173. 43 ± 5. 99 cm) participated in the study. They had been fencing for over five years (7. 36 ± 1. 87 years). They were all epée fencers. Sixteen of them were all regularly competing in fencing national competitions and sixteen were recreational fencers. They volunteered to participate in the study. Each subject's legally authorized representative has been informed on the experimentation and has signed an informed consent.

Muscular power is the amount of work performed per unit of time. It is the expression of the anaerobic phosphocreatine system. It was measured with Sargent test [8]. This test allows an indirect measure of muscle power in the lower limbs. The subject is positioned from side - on, 30 cm in front of the vertical projection of a board. A ruler is fixed along the board. The ends of the fingers are placed in chalk. The arm on the side of the wall is lifted fully extended, heels on the ground. The end of the fingers prints a first brand (h0) on the board. Without taking momentum of the legs bent at a 30° position, the subject jumps as high as possible. The extension arm prints a second brand on the board (h1).

Three trials are given for each subject. The best score is taken into account. From this score, extrapolated muscular power is obtained using the formula of Lewis [9]:

Aerobic endurance expresses capacity to use a set of percentage of VO2 max that can be endured as long as possible. It was determined by using track with classic Cooper test [10]. It was also determined with a specific Fencing Endurance Test (FET) [11]. These two tests were performed with a three - day interval. No aerobic endurance training was performed in between.

The Cooper test was chosen as aerobic reference. The participants ran the greatest distance possible within 12 minutes. VO2max was obtained using the formula:

In addition, the blood lactate concentration was analyzed before and after warm - up, at the end of each test and 15 minutes after the end of each test from 20 μl capillary blood (Accutrend Plus, Roche Diagnostics Gmbh, Germany). The heart rate was also recorded (Suunto Memory Belt, Vantaa, Finland).

Following the procedures determined by Weichenberger et al. [11], the Fencing Endurance Test (FET) was conducted on a fencing ground over a distance of 7 m. The fencers moved forward and backward using fencing - specific steps holding their weapon in front of the body in the usual position. A change of direction was carried out at 0 and at 7 m. The athletes started at a speed of 3 km/h. With the aid of acoustic signals given by a computer and markings on the floor, the athletes could orient themselves regarding the predefined speed and the changes of direction. The speed was kept constant over a period of 3 min to ensure steady state conditions.

During the test, the speed was increased by 1 km/h every 3 min up to exhaustion. The highest speed level attempted was recorded for every participant. It represents the highest endurance level. In addition, the blood lactate concentration was analyzed (Accutrend Plus, Roche Diagnostics Gmbh, Germany) and the heart rate was recorded (Suunto Memory Belt, Vantaa, Finland).

Suprailiac, subscapular, triceps and biceps skinfold thickness were assessed using Harpenden calipers. Body fat percentages were calculated from the mean of three readings per site according to the formula of Durnin and Rahaman [12].

The mean values were averaged and contrasted using a t - test (competitive vs recreational).

The latter present a higher muscular power than the recreational’ group (P = 0. 01), characterizing a better amount of muscular work performed per unit of time. This difference is 29. 41 % higher in competitive than in recreational group (Table 2). 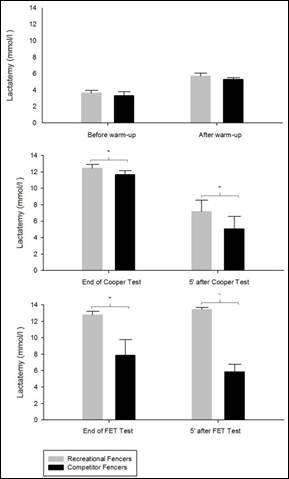 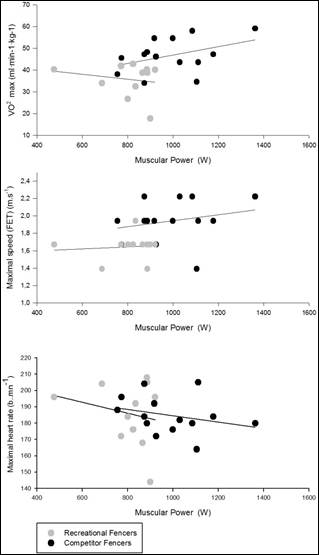 Fencing is a combat sport which can be studied at different levels particularly as regards to the metabolic processes involved. Although aerobic processes allow to compete and to hold a series of bouts, phosphocreatine processes allow to face specific sequences during a bout. The aim of this study was to search for a possible correlation between these two processes in young fencers involved in competition and in young recreational fencers. These processes were studied through basic field tests and through a specific fencing endurance test.

The main result of this study is the fact that competitors present both higher aerobic endurance capacity (expressing aerobic process) and higher anaerobic alactic capacity (expressing phosphocreatine process) than recreational fencers. Despite deep differences between these two processes providing energy for muscular activity, whether it be about the oxygen uptake or about the intensity of exercise [4], competitors reach high level for both. Whatever the endurance test used, competitors have the highest VO2max level and they reach the highest speed steps during the FET. So, the capability to perform an intensive effort during a long time does not impair the capability to produce a highly explosive exercise in young fencers involved in competition. The coefficient of correlation confirms the strong link between these qualities. Our results in young fencers confirm Nystrom et al. [14], who indicate that both aerobic and dynamic strength are present collectively in world class fencers. So, following these results, physiological needs have to be, necessarily, considered in two temporal scales, one based on competition duration and one based on bout duration.

The lack of correlation between the levels of aerobic endurance capacity and muscular power in young recreational fencers indicates that both capacities are necessary but not necessarily jointly. It tends to confirm that the association between both aerobic endurance capacity and muscular power is the main element of competitiveness. These results are in line with Harris et al. [15] whose work indicates that the synthesis of phosphocreatine requires necessarily the presence of oxygen. Physiologically, these two qualities are complementary despite their differences in terms of oxygen uptake.

The specificity of fencing is highlighted by the analysis of heart rate measures. Beyond energy muscular furniture, the activity is conditioned by the stake of combat which incites fencers to reach higher heart rates, whatever their sport level [16]. The maximum heart rates between young competitors and young recreational fencers recorded in the unspecific Cooper test are lower than the maximum heart rates recorded in FET. Moreover, the maximum heart rates between young competitor and recreational fencers recorded in the unspecific Cooper test are significantly different for each group whereas the maximum heart rates recorded in FET cannot distinguish young competitors and recreational fencers. These latter values are significantly higher in both Competitors and Recreational groups than the ones recorded in Cooper test. The duration of effort and duration of each step (3 min.), showed by the speed step reached, suggests the fact that young fencers could use the glycolysis - lactic acid process in higher steps of test. Their capability to reach these steps seems to represent their tolerance of high - intensity exercise. Finally, the capability to sustain high heart rate allows to face the requirements of the fencing movements permitting to lower total response time and accuracy of movement despite fatigue [6,17]. The average blood lactate concentration shows evidence of these assertions. It confirms the capability of young fencers (especially competitors after the specific Fencing Endurance Test) to sustain high levels of exercise, particularly in fencing specific displacements [18]. The average blood lactate concentration clearly indicates that the glycolysis - lactic acid process is used to generate ATP for muscle activity [19].

These results raise questions about training and the self - perception of effort. Whereas the aerobic and phosphocreatine processes seem necessary to succeed in fencing, our results suggest the necessity to integrate both processes while training. The combined development of different training modalities allows to develop combined effects of concurrent strength and endurance training. It has been studied for a long time [20]. The effects of concurrent strength and endurance training, involved in the development of both aerobic and phosphocreatine systems, had particularly been studied with a lack of unanimous conclusions. The association of such different modalities seems to show negative effects particularly to the detriment of strength modality [21-23]. Hickson et al. [21] particularly indicated that muscular power is altered when simultaneous training in aerobic and strength modalities. Moreover, it seems there is evidence that endurance training inhibits maximal strength development [24]. However, strength training does not interfere with the development of the maximal oxygen uptake [25]. Because endurance training reduces fat mass, our results confirm that competitors have also a better level of strength and endurance.

Moreover, following Weichenberger et al. [11], a specific test appears to be more accurate to represent the physiological load of fencing [26]. In such ecological test conditions, cognitive and psychological aspects influence physiological behavior. So, the lack of specificity of the muscular power test could be considered as the main limit of this study. An unspecific test appears to be more accurate to study a physiological quality isolated from the specific task constraints. However, beyond these precisions, specific and unspecific tests allow to distinguish the same hierarchy between fencers independently of heart rate measure which does not appear to be the most pertinent variable.

The present study confirms that fencing in competition requires both phosphocreatine and aerobic processes to produce ATP. It tends to question physical training methods usually used in fencing which consider endurance as the main physical quality to develop whether it be for young or adult fencers, whether it be for competitor or recreational fencers. Moreover, one could be surprised at the high intensity activity which can evoque possibility to use the glycolysis process which produces ATP without oxygen, producing lactic acid in muscles and blood. An experiment allowing to study this possibility should be planned.

The author is particularly grateful for the assistance given by Anne Alibert (Institut National Polytechnique, Toulouse, France).