Although another modalities to provide feedback have a higher amount of studies (e.g., frequency) than bandwidth, it is interesting to note that bandwidth feedback seems to improve motor learning [9] because the moment to provide information on frequency or average feedback is determined by the researcher and on bandwidth is determined by the learner performance [10, 11]. In other words, when one adopts bandwidth feedback, the learner performance determines the moment feedback should be provided [8]. Consequently, quantitative information that conducts planning corrections combination with qualitative information that conducts to stable behavior improved skill acquisition [9].

Sixty university volunteers self-declared right-handed, from both sexes, aged from 18 to 35 years old with no experience on the task participated as volunteers on this study. Volunteers signed the consent term preceded the experiment. The protocol was approved by the local ethics committee of the Universidade Federal de Minas Gerais. The study was performed in accordance with the ethical standards established in the 1964 Declaration of Helsinki amended in 1989.

The instruments adopted on this study were a computer with specific software for data collection and analysis and a numeric keyboard connected to the computer. The task consisted of pressing the keys 2, 8, 6, 4 aiming to reach and pre-established target time.

All data were organized in blocks of five trials, resulting in ten blocks on acquisition phase plus two blocks of transfer test and two more blocks of retention test. The effects of bandwidth KR were analyzed on performance accuracy (Constant Error - CA) and performance consistency (Standard Deviation) by two way ANOVA. We adopted the post hoc of Tukey for pair comparison and p ≤. 05.

Data analyses are presented separated by phase of the study. First of all we shows data from acquisition phase, followed by transfer test and at last data from retention test. 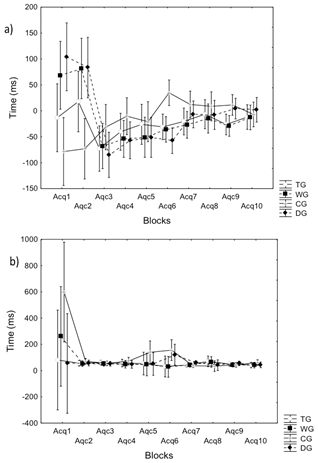 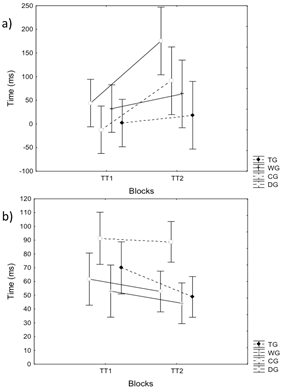 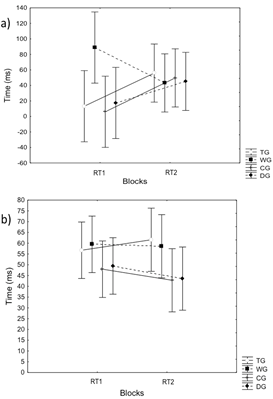 The analysis of transfer and retention tests shows that crescent bandwidth of feedback is worst to performance than thin, wide and decreasing bandwidth. Accordingly to Goodwin e Meeuwsen [19], high amount of feedback for movement corrections at the end of acquisition phase is as detrimental as high amount during the whole phase. Following this position, crescent bandwidth should deteriorate skill acquisition and we observed this on both tests, but wide bandwidth did not. Probably the high amount of quantitative feedback at the beginning of practice

On the other hand, Lai and Shea [17] found that 0% of bandwidth at the end of acquisition phase improve skill acquisition. Our results also show that thin bandwidth improved performance accuracy on transfer test.

The hypothesis was that decreasing and thin bandwidth should increase performance consistency. During transfer test thin bandwidth was more accurate than crescent bandwidth. This difference shows that in the second part of learning phase the wide bandwidth does not provide reference for error correction and deteriorates performance. On the other side, we expected higher consistency of decreasing bandwidth. In fact crescent bandwidth presented lower consistency on transfer test and lower accuracy on retention test in comparison to the other bandwidths. In part this results confirm those found by Ugrinowitsch et al [11] when showed that thin bandwidth improved consistency on tests. Probably participants had enough practice for learning the task and, at this moment, thin bandwidth does not requires constant changes on action plan. Moreover, wide bandwidth at the beginning of practice does not provide reference for error correction [1, 7], since wide and decreasing bandwidth have not present higher performance neither on accuracy nor on consistency.