The glenohumeral joint is the most important joint of the shoulder girdle. It is a synovial, ball and socket joint between the humeral head and glenoid fossa of the scapula (William Cornelis 1998). The shoulder joint is stabilized by primary structures, that includes the articular capsule, glenohumeral ligament, and labrum and the secondary structures, that include the rotator cuff, deltoid, and biceps, which also provide dynamic stabilization to the fixed nerve root during throwing motion (Soung Yob R, Wi-Young 2014). From a biomechanical perspective, the glenohumeral joint is typically described as having the following 3 degrees of rotational freedom, that are, plane of motion, elevation, and internal and external rotation (Sean P. McCully et al 2005). Many of the traditional studies of shoulder motion have primarily focused on shoulder elevation, but there has been considerable interest of late, in measuring internal and external rotation along the long axis of the humerus (Reagan KM et al 2002).

Alterations in scapular and humeral kinematics have also been theorized as a result of posterior capsule tightness. Induced posterior capsule tightness in cadavers has resulted in alterations in glenohumeral kinematics, which may place the overhead functioning shoulder at greater risk for injury (Michael R. Borich et al 2006). The joint geometry of the glenohumeral joint is conductive to excessive mobility but sacrifices osseous stability. (Terry R. Melone, Thomas Mc Poil).

Throwing appears as one of the main gestures which involve this joint being present in many sports such as baseball, handball, tennis, badminton and basketball, with different techniques that depends on each sport. (Valquiria Nunes et al, 2012). Injuries produced by overhead throwing are also the result of an imbalance of two normal force vectors. The internal rotation/flexor muscle groups produce high level of force during acceleration of the arm and so it is necessary that the smaller external rotator muscle group (infraspinatus and teres minor) must counterbalance this by an eccentric contraction (F. H. Savoie, 1993). The joint geometry of the glenohumeral joint is conductive to excessive mobility but sacrifices osseous stability. (Terry R. Melone, Thomas Mc Poil). Many researchers have hypothesized that the breakdown in the kinetic chain is one of the reason for shoulder problems. The ground reaction force forms the beginning of the kinetic chain and thus controls the throwing motion. The transfer process in throwing, starts from the ground, to the legs, then the ground, and finally to the ball. (Steven J Karageanes).

GIRD is calculated as the difference in the maximum humeral internal rotation angle between the dominant (throwing) and non-dominant (non-throwing) limbs. A deficit of 10-17 degree of internal rotation is common in the dominant arm of throwing athletes who have not suffered any shoulder injury.GIRD greater than 25° has been associated with injuries such as superior labral lesions, subacromial impingement, and pathological internal impingement in the throwing shoulder in dictating a need for investigation of preventative and corrective interventions to restore GHJ internal rotation ROM. [4] (Elizabeth E. Hibberd et al, 2014).

Adaptive changes to bone and soft tissue, occur as a result of the repetitive throwing motion that contribute to the presence of GIRD in the overhead athlete (Stephanie D. Moore et al, 2014). There are many hypothesis on the etiology of the deficit of the medial rotation, one of them states that, it is a result of a contracture and thickening of the postero-inferior portion of the glenohumeral capsule, which occurs due to the repetitive micro trauma during the phases of late cocking and follow through of the throwing movement (Valquiria Nunes et al, 2012).

Measurement of Glenohumeral Internal Rotation: The subjects were positioned supine on a treatment table with a hip and knee flexed to 90 degree. The shoulder to be examined was kept initially at 90 degree of abduction and 90 degree of elbow flexion, with the arm perpendicular to the ground. Stabilization of the scapula was achieved by placing a towel roll below the shoulder. The goniometer was aligned, such that, the axis of the goniometer was the olecranon process of the ulna, the stationary arm was perpendicular to the ground and the moving arm was parallel to the longitudinal axis of the ulna pointing towards the styloid process. The shoulder was then, passively internally rotated with one hand, and the ROM measurement was taken at the first point of resistance, using a goniometer. (Fig. 1) 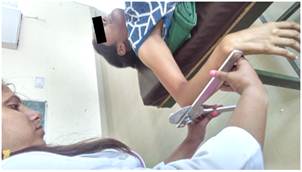 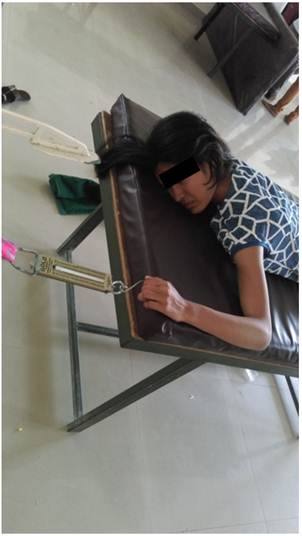 Measurement of Glenohumeral Internal Rotators Strength: The subjects were positioned prone on the treatment table, with the shoulder at 90 degree of abduction. A leather wrist strap was positioned 15 cm distal to the olecranon process, and was attached to the strain gauge, via, a chain. The subjects were asked to perform maximum voluntary isometric internal rotation contraction in the neutral position. The contraction was sustained for five seconds. The value of the force generated during maximum isometric shoulder internal rotation contraction was recorded in the strain gauge. (D L Falla, S Hess, C Richardson, 2003) (Fig. 2)

Application of Muscle Energy Technique (PIR):- The subject was positioned supine on the treatment table with the shoulder and elbow, at 90 degree of abduction and flexion. The shoulder was stabilized at the acromion process with one hand, and the other hand was used to passively move the arm into internal rotation until the first barrier of motion was reached. The subject was then instructed to perform a 5-second isometric contraction of approximately 25% maximal effort in the direction of external rotation, against an opposing force provided at the distal forearm. Following the contraction, the subject was instructed to internally rotate the arm toward the ground as a 30-second active assisted stretch was applied. The subject was instructed to relax, and a new movement barrier was then engaged. This protocol was performed for a total of 3 repetitions. (Stephanie D. Moore et al 2011). This lengthens the external rotators thus increasing the internal rotation range of motion. (Fig. 3) 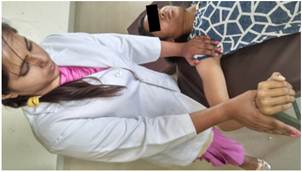 Fig. 3. Showing Application Of MET to the External Rotators.

Application of Stretching:- The subject was positioned supine with the shoulder at 90 degree of abduction and elbow at 90 degree of flexion. The shoulder is stabilized at the acromion with one hand and the arm is passively internally rotated with the other hand. The stretch was maintained for 10 seconds. The protocol was repeated 3 times. This lengthens the external rotators thus increasing the internal rotation range of motion. (Kisner and Colby). (Fig. 4) 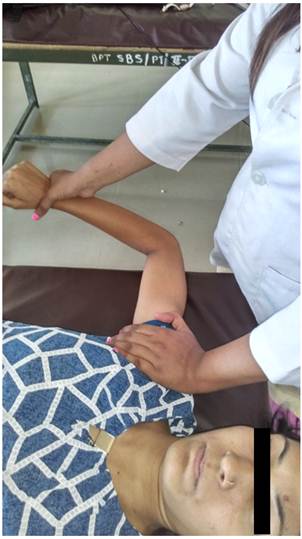 Significant level has been selected as p < 0.05.

Fig. 5. Mean comparison of ROM between group A and group B at o day, 1st week and 2nd week.

Fig. 6. Mean comparison of Strength between group A and group B at o day, 1st week and 2nd week.

In our study we observed that the resistance felt at the end range of motion had a rubbery end feel suggesting that the participant may had deficit in the internal rotation due to soft tissue tightness. The participants taken in the study had a pain free shoulder and were having anatomical GIRD.

There is also a significant change in kinematics, during the throwing motion. In a kinetic chain the energy and momentum are transferred through adjoining body segments via coordinated motion resulting in maximum transfer to the terminal segment and thus a throwing motion a kinetic chain is consists of the legs and hips trunk, shoulder, upper arm, forearm and hand, with the ball serving as the terminal segment, use of all the components of the kinetic chain allows the throwers to attain maximum performance without causing undue overload to the shoulder. A failure or fatigue of one or more components of the kinetic chain places increase demand on the remaining chain and causes lack of internal rotation strength.

In our present study we found that the change in the kinematic chain could be due to the fatigue in the soft tissue structures in the glenohumeral joint. The fatigue in the muscles and ligaments would have placed stress on the shoulder due to which there was a loss in the internal rotation of the dominant shoulder, but the participant do not have shoulder pain which clearly depicts that osseous changes did not took place in the glenohumeral joint.

Many researchers have explained the different phases of throwing, in the glenohumeral joint. Every phase have its different biomechanics and force production by the muscle which act during the motion of the shoulder. During the cocking phase of pitching and throwing, the high level of loading on the shoulder passive restraints causes gradual stretching of the capsular collagen leading to an increase in external rotation ROM (Elizabeth E. Hibberd et al, 2014). During the acceleration phase of throwing, the supraspinatus, infraspinatus and teres minor work eccentrically to provide stability to the humeral head and thus prevent excessive anterior translation of the humeral head (Juneja H, Verma, S. K., Khanna, 2011). During the throwing motion, the centre of rotation is shifted postero superiorly on the glenoid and this alters the interplay of torsional forces on the superior labrum and related biceps tendon and anchor. This allows for further external rotation by increasing the clearance for the greater tuberosity and also prevents direct internal impingement of the posterosuperior labrum/rotator cuff. Furthermore if this biomechanics is altered, anterior capsular laxity and loss of glenohumeral internal rotation in abduction occur, resulting in a thrower’s "dead-arm" (Hugue Ouellette et al, 2007). In one the study Burkhart et al believed that athletes with glenohumeral internal rotation deficit exhibit a posterosuperior shift increasing contact among the humeral head, labrum, and rotator cuff in the late cocking phase of the throwing shoulder (Robert C Manske RC, et al, 2010).

On the contrary, in our present study we found that there was a change in internal and external rotation, bilaterally but the total arc of motion was not affected which clearly suggest that mild changes which were present in the soft tissues of the throwing athlete were due to the alteration in joint biomechanics and imbalance in the muscles.

Roberts indicated the effects of MET as decreased pain, increased range of motion, decreased muscle tension and spasm, and increased strength. Another study by, Greenman (1989) depicts that Muscle Energy Technique helps to regain the mobility of the hypomobile joints by restoring normal length tension relationships which are shortened and by strengthening the weakened muscles and reduce edema by pumping action for lymphatic system(B. Chakradhar Reddy, Santosh Metgud, 2014)

One of the experimental study also concluded that MET produced a change in ROM was possibly due to an increased tolerance to stretch, as there was no evidence of Viscoelastic change (B. Chakradhar Reddy, Santosh Metgud, 2014).

According to Lean Chaitow the physiological mechanisms behind the changes in muscle extensibility produced by MET are reflex relaxation, viscoelastic or muscle property change, and changes to stretch tolerance - a change to tolerance to stretching is most supported by the scientific literature (lean Chaitow). These mechanisms bring about a change in muscle physiology and hence lead to increased ROM at the joint.

On the other hand, the group which was treated with stretching of the external rotators did not show a significant increase in the GHJ internal rotators ROM and strength. Stretching is thought to increase the flexibility at the joint, as proved in many of the past researches.

One of the study demonstrated that stretching protocol has the ability to the increase the shoulder internal rotation and total arc of motion in the throwing shoulder. (Roy Aldridge, J. Stephen Guffey, Malcolm T. Whitehead, Penny Head, 2012).

Though may studies support that stretching is effective in improving the ROM at the joint, but in the present study it is non-significant when compared to the MET. This may be, because the protocol was given 3 days in week, which may not be able to bring effective outcomes.

As a result the present study proved that MET is effective in increasing the ROM and strength of internal rotation of the glenohumeral joint. Flexibility is considered to be a valuable component of athletic performance, so the subjects involved in overhead throwing sports can be treated with MET to improve the flexibility.