Sprinting is an essential component of baseball and is the only physical factor used for both offense and defense [1,2]. A faster baseball team should have a distinct advantage over the opponent during both attack and fielding [3]. The batsman and runner rarely run in a straight line greater than 27.431 m (the distance between bases). Therefore, sprint distances in baseball are often less than 30 m and are considered to be similar to the initial acceleration phase (0-10 m) or acceleration phase (0-30 m) of a 100 m sprint [4-6]. Sprint speed in the acceleration phase is required in many field sports, including baseball. The particular importance of speed in the first few steps of a field sports game was examined [6]. It was found that sprint speed after starting and in the acceleration phase are very important for baseball. McFarlane divided the acceleration phase into a pure acceleration (up to approximately 15 m) and a transition (approximately 15-30 m) phase, and suggested methods of training for each phase specifically. In particular, sprint training with resistance-adding equipment (tire, harness, or weight vest) is one of the best methods for developing the early phase of acceleration [5].

Twenty-two baseball players who had joined the single high school baseball team volunteered because this study needed similar condition or practice environments of subject to evaluate the effects of training intervention. Subjects were eligible for inclusion if they performed their best sprint without illness, without pain that influenced the sprint, or without lower extremity injuries. Subjects who could not complete the training interventions (injured a lower extremity during baseball practice or in a car accident) or those who dropped out were excluded, totaling three subjects excluded; a total of three individuals were excluded. Data from the 19 individuals who remained in the study (age: 16.4 ± 0.4 years; height: 168.2 ± 6.1 cm; body mass: 60.0 ± 8.0 kg) were included. During this study, the subjects continued their normal schedule of baseball practice (six days/week) and resistance training (three days/week).

The details and safety concerns of the interventions were explained to the study individuals, their parents, and team managers, and consent was obtained from all involved because the study individuals were younger than 18 years. The study was approved by the Waseda University Human Research Ethics Committee.

Prior to testing, all subjects were instructed how to perform the trials and practiced sprinting. They completed a warm-up that consisted of low intensity jogging (5 minutes), static stretching (5 minutes) and dynamic stretching (10 minutes). They also completed sprints (4 x 5 m, 2 x 10 m, 1 x 20 m, and 1 x 30 m) at maximum effort. Then, rehearsals were performed twice before the actual trials. During the sprint trials, the starting posture of each subject’s body was defined as approximately 90° to the left of the direction of motion, which is the same position that a player would be in when starting to steal a base during a baseball game (Figure 1-a). Just after starting, the left foot pivoted and pushed off the ground and the right foot rotated externally in the proceeding direction (Figure 1-b), and then the torso rotated into the proceeding direction (Figure 1-c). 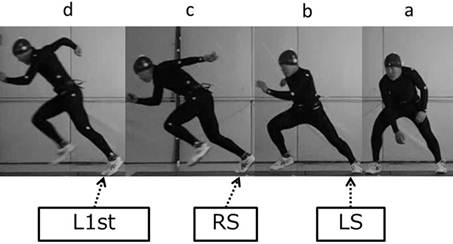 Sprint speeds at 0-5 m, 5-10 m, 10-15 m, 15-20 m, and 0-20 m were measured using a velocimeter (VMS-003, VINE Corp, Tokyo, Japan). This instrument is composed of a hook, a string, a rotary encoder to detect pulses of rotation, a winding reel, and a motor running a reel. Before the trials, subjects fitted a belt 10 cm below the umbilicus. Pulse signals generated by a rotary encoder were sampled at 500 Hz and were converted into numerical values through the interface and were displayed on a screen. Based on these data, sprint speeds measured during each phase from the pulled string distance were calculated. To measure ground reaction force, Measurements were performed at a hardwood indoor basketball court which could embed the force plates. All subjects walked back to the starting line after each trial and were given two minutes rest until the next trial.

GRF at the start, 5 m, and 10 m were obtained using two force plates (FP6012-15, Bertec Corp, Ohio, USA). GRF measured at the left foot at the start was defined as LS and that at the right foot at the start was defined as RS, respectively. Because GRF had to be measured at the start, 5 m, and 10 m, two trials were performed at each of the following start locations: a) onto the force plates; b) 5 m before the force plates; and c) 10 m before the force plates. GRFs measured at 5 m and 10 m were obtained at the first step that passed each line (5 m and 10 m), regardless of whether it was with the right or left foot. The trials were performed twice because it was not possible to collect all the data in the same session. Trials in which the foot contact was unclear were excluded and measured again after two minutes of rest. Thus, the subjects performed between two to five sprints at each start location until two successful trials could be performed completely. Horizontal force and vertical force (Fver) were measured. Among horizontal forces, a forward-countering force was defined as propulsive force (Fpro). A Vital Recorder 2 (KISSEI COMTEC, Nagano, Japan) was used to collect GRF data (sampled at 1000 Hz) and data were analyzed by Kine Analyzer software (KISSEI COMTEC, Nagano, Japan). To avoid any drift, zero setting was performed just before the subjects contacted the force plates at 5m or 10m. Resultant force (Fres) from the propulsive and vertical forces (1) were calculated and the peak values of propulsive forces (PFpro) and resultant forces (PFres) were determined. Propulsive and resultant force impulses (Ipro, Ires) were calculated from each force value and contact time (2).

Contact time at RS, L1st, 5 m, and 10 m were measured as the time when Fpro and Fres increased above 10 Newton (N) and below 25 N [20]. At the start time, LS never left the ground and acted as a pivot to turn the body in the direction of travel. Therefore, the contact time of LS was measured from Fpro and Fres between the times when LS increased above 10N after signal start and then decreased to <25N. To investigate the direction of GRF, the average ratio of force applied to the ground (RF) [23] was calculated as the rate of propulsive force to the GRF (3). All GRF variables measured in each of the two included trials were averaged and used for statistical analysis.

Before training, Student’s t-tests were performed to compare the possible differences in age, height, body mass and 20m sprint speed measured pretest between groups. Sprint speeds at 0-5 m, 5-10 m, 10-15 m, 15-20 m, and 0-20 m were measured before and after eight weeks of training in both groups (RSG and NSG), the absolute values were obtained, and the means and standard deviations (SD) were calculated. GRF data except for RF data were obtained per N of body mass and calculated as mean and SD. A two-way [group (RSG and NSG) × times (pretest and posttest)] analysis of variance (ANOVA) with repeated measures for one factor (group) was performed to consider the effects of training and performed the Bonferroni test post hoc to compare mean values when the F value was significant. Effect size for interaction and main effects were estimated using partial eta squared values (pη2). Statistical significance was set at p<0.05. All statistical analyses were performed using Statistical Package for the Social Sciences (version 19.0, IBM SPSS Inc., Armonk, NY, USA).

There were no differences in age, height, body mass, and 20m sprint speed between the RSG (n=10) and NSG (n=9) (Table 1); therefore, the groups were divided similarly.

Table 3. Sprint speeds measured before (pre) and after (post) training.

*** p<0.001 significant difference within the same group, main effect for the time of test (pre and post).

** p<0.01 significant difference within the same group, main effect for the time of test (pre and post).

* p<0.05 significant difference within the same group, main effect for the time of test (pre and post).

Peak propulsive and resultant force (PFpro and PFres) in both groups (RSG and NSG) before and after training are presented in Table 4. A significant interaction was found for PFpro at the L1st (pη2=0.299, p=0.015). PFpro and PFres at the L1st increased significantly in the RSG after training (PFpro: pη2=0.378, p=0.005; PFres: pη2=0.230, p=0.038). No significant differences were found for PF data measured at other locations in both groups.

** p<0.01 significant difference within the same group, main effect for time of test (pre and post).

* p<0.05 significant difference within the same group, main effect for time of test (pre and post).

Table 5. Ratio of force applied to the ground (RF) before (pre) and after (post) training.

*** p<0.001 significant difference within the same group, main effect for the time of test (pre and post).

Table 6. Propulsive/resultant force impulse (Ipro and Ires) before (pre) and after (post) training.

The relationship between sprint speed and propulsive force (peak, impulse) measured after starting has been recognized in previous studies [20-22]. Many studies have suggested the importance of exerting propulsive forces in the acceleration phase [21,22]. In both groups, the impulses of Fpro (Ipro) and Fres (Ires) measured at all locations (LS, RS, L1st, 5 m, and 10 m) were not significantly different. However, peak propulsive force (PFpro) and peak resultant force (PFres) measured at L1st in the RSG increased significantly after training. When a sled is towed, the frictional force applied between the sled and the ground is maximum at the start (maximum static friction), and then decreases gradually as the sled moves and finally becomes stable (dynamic friction) [27]. In addition, inertial force is exerted on the sled when resisted sprint begins. For these reasons, it is inferred that increases in PFpro and PFres measured at L1st in the RSG were influenced by frictional force and inertial force in sled towing.

Remarkably, GRF changed in the RSG at the L1st; on the other hand, no significant changes were noted at other locations. Such results may be influenced by the starting posture during resisted sprint training. In this study, the starting posture was defined as each subject’s body at approximately 90° to the left of the direction in which he will proceed, analogous to a player starting to steal base in a baseball game (Figure 1-a). Because of this specific starting posture, subjects had to turn their bodies approximately 90° to the right and face the direction in which they were going to proceed. Therefore, the LS functioned as a pivot foot and the motion of the body was directed toward the proceeding direction from the RS and the L1st. Just after starting, a maximum resistance force (inertial force and frictional force exerted on the sled) was loaded to the body during resisted sprint training. In resisted sprint training, greater force was required to accelerate compared to that required to sprint without loading. In particular, resistance force loaded to the body by the inertial force and frictional force during resisted sprint training increased at the L1st, which is the first step after turning the body toward the direction in which it is about to proceed. Therefore, the effects of resisted sprint training to GRF are limited to the L1st.

The authors thank all who participated in this research.