Abstract: One thousand four hundred and ten (1410) adult women age ranged from 19 to 40 year were measured randomly for their anthropometric and somatotype characteristics as a part of fitness counselling at local fitness clubs during the year 2010-2012 at Toronto. Women were from Greater Toronto Area (GTA) of Canada and living in Canada for the last 15 years or more after migrating from different countries and were from different ethnical groups. The age ranged from 19 to 40 years with an average value of 26.2 year (±5.5). Observed average height for the studied women was 162.7 cm (±6.9) with an average body mass of 68.9Kg (±16.6). Height ranged from 151.5 cm to 177.5 whereas body mass ranged from 48.2kg to 87.5 kg indicating wide range of height and body mass. Mesomorphic Endomorph body type (6.1±2.5 ─ 4.3±1.6 ─ 1.4±1.3) was obtained in average. Most of them (65.9%) were with Mesomorphic Endomorph body type whereas 10.6% women were Endomorph-Mesomorph, rest were in different other categories. 30.8% body fat in average was observed which was very high considering 18-20% fat range for athletic women.

The somatotype is the morphological characteristic of the body built which is a phenotypic entity capable of changes with ageing, growth, exercise and nutrition. It is a convenient short hand descriptor of physique in terms of body shape and size [1].It is defined as the quantification of the present shape and composition of the human body and expressed in a three -number rating components representing endomorphy, mesomorphy and ectomorphy respectively, always in same order. Endomorphy is the relative fatness, mesomorphy is the relative musculo - skeletal magnitude, and ectomorphy is the relative linearity or thinness of the physique [2]. It is important to recognize the somatotype as a description of the body in general, and does not answer more specific questions related to the specific dimensions of the body [1].

In Canada, obesity is a public health challenge and growing concern for the past few years [3, 4, 5, 6, 7]. According to the information reveled from the joint report of Public health Agency of Canada and the Canadian Institute for Health Information [8], the number of obese adults in Canada had been increased tremendously since 1978 and doubled in the 2008 from 13.8% to 25.4% for adults over 18 years and more. Different studies also revealed that nearly 23% of Canadian population aged 18 or more were suffering from obesity with an additional 36% overweight in the year 2004 [4, 9, 10]. Thus identification of physique by somatotyping has an immense role in identifying national body type and size in terms of relative fattiness, muscularity and thinness. There were few studies on Canadian women for their somatotype rating. The last somatotype study on Canadian women was done from 1976-1978 by Bailey et al [11] and later on by Katzmarzyk et al from 1978-1981 [12]. Later on most of the studies were on athletic population [13, 14]. No study was done on somatotypic characteristics of Canadian women, especially on those who were living in Canada after migrating to Canada from other countries. Thus, the aim of the present study was to evaluate the somatotypic characteristics of Canadian women who had been migrated and living in Canada more than 15 years.

Participants were the healthy women from Greater Toronto Area (GTA) of Ontario province of Canada who came to the local fitness club for enrolling their name in fitness program and first time enrolling themselves in a fitness program. A total of 1410 women were measured on the very first day prior to their exercise program starts and study was carried out for two years from 2010-2012. Participants were the Canadian who immigrated to Canada from different countries and living in Canada for the past 15 years or more. The group was thus a combination of different ethnical groups from different countries. Age was noted according to their declaration. Race, ethnicity and duration of migration period were self reported. All the participants had participated in the study voluntarily and written consent was taken before the measurements according to club’s enrollment rules, regulations and ethical issues.

Heath – Carter [17] method was followed for somatotype rating. The following equations were uses for calculating somatotype.

where ΣSF = (sum of triceps, subscapular and supraspinale skinfolds) multiplied by (170.18/height in cm).

Three different equations were used to calculate ectomorphy according to the height -weight ratio (HWR): If HWR is greater than or equal to 40.75 then,

Durnin and Womersley [18] technique was followed for body density. Body fat% was derived from the equation of Brozek et al [19].

The Statistical Package for Social Sciences ( SPSS v14.0) was used for all descriptive statistics. The results are noted as means and standard deviation.

Table 1 showed the Physical characteristics, somatotype components and body composition of the Canadian women in average. The age ranged from 19 to 40 years. A high average fat% was observed for the Canadian women with a range of 14.2 - 47.4 percent fat.

Table 2 represented the physical characteristics and body composition of the Canadian women at different age categories. Older Canadian women were more endomorphic as well as more mesomorphic than their younger counterparts which was also reflected in increased fat% as women became older. 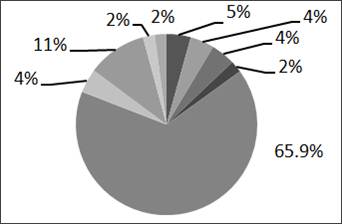 Fig. 1. Percent of Canadian women in Somatotype categories (for all ages). 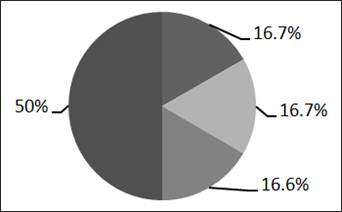 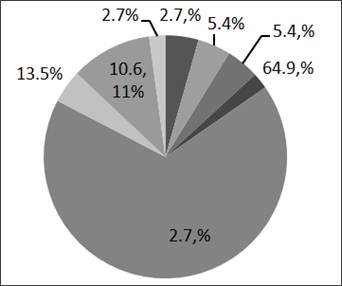 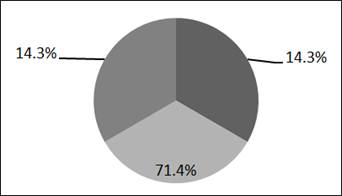 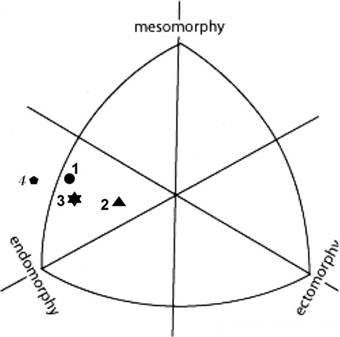 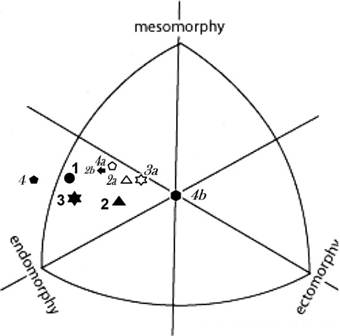 Fig. 6. Mean somatotype of Canadian women from of different studies.

In the present study, subjects were selected from those who were originally from other countries but migrated to Canada as an immigrant and lived here for more than 15 years without changing their ethnical food habits but changing their life style according to Canadian life style. Physical activities were different according to their profession but life style activities were very similar which were obtained from the questioners at the time of enrolment at the fitness centre.

Average body type of the Canadian women, observed in the present study, was mesomorphic endomorph with 30.7% body fat. Average endomorphic component was 6.0±2.4. Components were in between 1.6 to 8.1 which indicated a huge variation in endomorphic characteristics from lean to obese reflected in the wide range of linearity from 0.1 to 5.4. That might be due to multicultural variation of body type. Similarly, though average muscularity was 4.2±1.5, but muscularity components also varied from lowest 1.6 to highest 8.1 indicating good and poor muscularity with a wide variance. While the fat% range was from 14.2% to 47.4%, high average value indicated obesity tendency of Canadian women supporting other studies [3-8].

In the present study, endomorphy components increased similar to mesomorphy components as age increased Women below 20 years possessed an average value of 5.0±2.6 for endomorphic components which had been increased to 7.1(±2.8) for the 30-40 years old category (Table 2 and Fig 5). While age category increased above 30 years, body fat% also increased symmetrically by 8.3% from 26.7 to 35.0 (Table 2)