Abstract: Multivariate statistical process control (MSPC) is the most acceptable monitoring tool for several variables, and it is advantageous when compare to the simultaneous use of univariate scheme. However, there are some disadvantages in this scheme which include identification of influential variable(s). The Mason, Young and Tracy (MYT) decomposition diagnosis is one of the approaches commonly use to identify the influential variables. This approach aid the breaking down, the overall T square value and show the individual variable contribution, while their joint contributions is also revealed. The challenges of this approach include rigorous derivation of model, computation and complexity more especially when the size of the process characteristics is large. In this research paper we extend the decomposition derivation to five variables. One hundred and twenty (120) models (decomposition partitions) are obtained from the decomposition, revealing the invariance property of the Hotelling’s T square statistic, and eighty (80) unique terms.

In an industrial settings, process is monitored to ascertain conformability of products produced, when the process gave an out of control alert, indicating production of nonconformable products are about to be produced or has been produced, the quality engineer saddled with the responsibility of maintaining a specific quality may not be able to pin point variable(s) responsible for such ill situation, Therefore, it is important to address such situation. Multivariate quality control charts over years has been adopted to monitor many process variables simultaneously, and it has edge over simultaneous use of univariate charts. Literatures on Hotelling’s T2 control chart for detecting mean shift in a process can be found in works of many authors [1,2,3,4]. However, there are some disadvantages when multivariate approaches are used, which include interpretation of out of control, that is, how to identify influential variable among the process variables that triggered out of control alert. The challenge mentioned above give birth to the Decomposition of Hotelling’sT2, this decomposition of the Hotelling’sT2 statistic is considered to be one of the most effective tools for detecting variables that significantly contribute to out-of-control signal, it revealed individual contribution and the relative contribution among two or more process variables in a multivariate quality control process [5]. In the applications of the MYT procedure, two, three variables are mostly put into consideration, this may be due to the severity and complexity it entails to decompose larger variables. In this paper, we intend to review the MYT decomposition approach and extend it derivation to five variables so as to simplify and encourage the use of MYT for larger variables.

The Decomposition Model for the Five Variables

For a 5 dimensional vector, the form of the MYT model can be written as

The first term of this decomposition,

is known as the conditional Hotelling’s

is the mean and standard deviation of variable

respectively. The unconditional term can be viewed as a univariateShewhart control chart. It estimates the squared standardized variance of jth variable. A signal in this regards simply means that the jth variable deviate greatly from the sample mean.

and it follows F distribution which is also used as critical value as shown above, Thus, this statistic is used to ascertain whether the jth variable comply with the relationship with other variables as established in the phase I of the process, since the adjusted observation is more sensitive to changes in the covariance structure.

There is p! different partitions that can be generated,that is 5! = 120 partitions each and everyone partition contain the same overall T2statistic as seen in Mason, Young & Tracy [2],

All the research done for the interpretation of the out-of-control signal can be grouped in three categories: graphical methods, analytical methods and the use of neural networks. It has been observed that more work is needed on graphical methods for interpreting signals from multivariate control charts [17]. The graphical methods consist of drawing some type of chart that helps the user to identify the variable(s) that have shifted. [12, 13, 14, l5, 16]

As mentioned earlier, many graphic techniques have been used for better visualization and vivid interpretation of the influential variable(s). In this research paper, we are presenting a method known as Decomposition Bar Chart to preview the influential process characteristics.

In other to achieve this, the list of terms required to construct the decomposition bar chart will be generated.

. Hence, for five process characteristics, the number of unique term required to construct Decomposition Bar Chart is 80 terms. The 80 terms is illustrated below.

That is, we have eighty numbers of unique terms, where

are the unconditional terms of the decomposition, indicating the individual contribution of the variable one, variable two, variable three, variable four, and variable five.

indicating the bivariate relationship between the variable one, two, three, four, and five likewise,and

indicating the multivariate relationship that exist between variable one, two, three, four and five.

Assuming Hotelling’s T square signals and the variable one is having the potential of being the influential variable, MYT decomposition will be implored to break down the individual contribution and the joint contribution of the out of control point. To achieve this Decomposition Bar Chart all the unconditional terms and the conditional terms are plotted in a bar along their corresponding critical values.The contribution plot of the point can be view below. 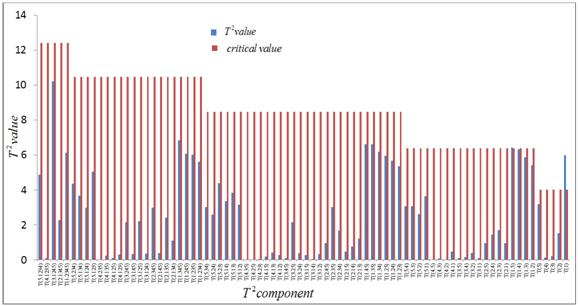 3.3. Graphical Presentation of the Influential Variable One

, which can be adopted in constructing the decomposition chart for unambiguous estimation and presentation of results. In this work, we have simplified T2decomposition model for five variables from which the contribution of each and every variable can be seen obviously when the process goes out of control.