Abstract: Competing risks data usually arises in studies in which the death or failure of an individual or an item may be classified into one of T≥2 mutually exclusive causes. In this paper, we will study the competing risks model when the data is progressively first-failure-censored. Based on this type of censoring, we derive the maximum likelihood estimators (MLE's) for the unknown parameters. Approximate confidence intervals and two bootstrap confidence intervals are also proposed. The results in the cases of first-failure censoring, progressive Type II censoring, Type II censoring and complete sample are special cases. A real data set has been analyzed for illustrative purposes. Different methods have been compared using Monte Carlo simulations.

In medical studies and reliability analyses an investigator is often interested in the assessment of a specific risk in the presence of other risk factors. In statistical literature this is known as the analysis of competing risks model. A lifetime experiment with

different risk factors competing for the failure of the experimental units is considered. The data for such a competing risks model consist of the lifetime of the failed item and an indicator variable which denotes the cause of failure. For example, the competing risk for a prostate cancer patient may include prostate cancer itself, heart disease and (all) other causes. The effects of the other competing risks may play an important role in survival studies on slowly progressing diseases such as prostate cancer. In engineering applications, the causes or risks may signify either multiple modes of failure for a complex unit or multiple components or subsystems which comprise an entire system. Occurrence of a system failure is caused by the earliest onset of any of these component failures. In this respect, the framework is that of a system with components connected in series. Several studies have been carried out under this assumption and the risks follow different lifetime distributions, namely the exponential, lognormal, gamma, Weibull, generalized exponential or exponentiated Weibull; see for example Moeschberger et al. [1], Pascual [2] Cramer and Schmiedt [3], Sarhan et al. [4], Sarhan [5], Alwasel [6], Kundu and Bas [7] and Kundu and Sarhan [8].

Censoring occurs when exact lifetimes are known only for a portion of the individuals or units under study, while for the remainder of the lifetimes information on them is partial. There are several types of censored tests. The most common censoring schemes are Type-I (time) censoring, where the life testing experiment will be terminated at a prescribed time

, and Type-II (failure) censoring, where the life testing experiment will be terminated upon the

is pre-fixed) failure. However, the conventional Type-I and Type-II censoring schemes do not have the flexibility of allowing removal of units at points other than the terminal point of the experiment. A generalization of Type II censoring is the progressive Type II censoring. It is a method which enables an efficient exploitation of the available resources by continual removal of a prespecified number of surviving test units at each failure time. On other hand, the removal of units before failure may be intentional to save time and cost or when some items have to be removed for use in another experiment. Wu et al. [9] and Wu and Yu [10] for extensive reviews of the literature on progressive censoring. When the lifetimes of products are very high, the experimental time of a Type II censoring life test can be still too long. Because of these lack of flexibilities, Johnson [11] described a life test in which the experimenter might decide to group the test units into several sets, each as an assembly of test units, and then run all the test units simultaneously until occurrence the first failure in each group. Such a censoring scheme is called first-failure censoring. If an experimenter desires to remove some sets of test units before observing the first-failures in these sets this life test plan is called progressive first-failure-censoring scheme.

In this section, first-failure censoring is combined with progressive censoring scheme as in Wu and Kuş [12] Suppose that

items within each group are put on a life test,

) has occurred, and finally

groups and the group in which the

) has occurred. The data

takes a value either 1 and 2 the causes of failures. It is clear that

. For a given censoring scheme

, the likelihood function of the observed data

are reliability and failure rate functions, respectively, and

It is clear from

that the progressive first-failure-censored scheme containing the following censoring schemes as special cases:

The first-failure censored scheme when

The complete sample case when

Before proceeding any further, we describe some notations we are going to use in this paper.

-th individual under cause

indicator variable denoting the cause of failure of the

To simplify the notations we will use hereafter

. The model studied in the paper satisfies the following assumptions

I) The lifetime of unit is denoted as

. The time at which the unit

fails due to cause

II) The distribution of the random variable

is Burr XII with shape parameters

. It is clear that the parameter

does not affect the shape of failure rate function

Based on the observed sample (

The log-likelihood function without the additive constant can be written as follows;

Calculating the first partial derivatives of

and equating to zero, we obtain the likelihood equations

Hence, the MLE's of

, we obtain the profile likelihood function for

Therefore, the MLE of

can be obtained by maximizing

can be obtained from

can be obtained by solving the nonlinear Eq.

using, for example, the Newton-Raphson or fixed point iteration. The corresponding MLE

are computed from Equations

In this section, we propose different confidence intervals. One is based on the asymptotic distribution of

From the log-likelihood function in

, which produce an approximation confidence interval. It is known that the asymptotic distribution of the MLE is given by

is the variance-covariance matrix of the vector of unknown parameters. In practice, we usually estimate

are, respectively, given by

using both methods are illustrated briefly in the following steps:

Step 1: From the original data

)) compute the MLE's of the parameters: say

in Step 1 to generate a bootstrap sample

with the same values of

. We used the algorithm proposed by Balakrishnan and Sandhu [21], with the fact that, the progressive first-failure censored sample with distribution function

, can be viewed as a progressive Type II censored sample from a population with distribution function

in an ascending order to obtain the bootstrap sample

be the cdf of

values, determine the upper and lower bounds of the

be the cdf of

can be computed as same as computing the

We consider in this section a real-life data set which was originally reported by Hoel [17] and latter analyzed by several authors, see for example Pareek et al. [22], Sarhan et al. [4] and Cramer and Schmiedt [3]. It was obtained from a laboratory experiment in which male mice received a radiation dose of 300 roentgens. The cause of death for each mouse was determined by autopsy. Restricting the analysis to two causes of death, for the purpose of analysis, we consider thymic lymphoma as cause

and combine the other causes of death as cause

deaths due to cause

deaths due to cause

The mean, standard deviation and the coefficient of skewness for the two causes of death are calculated (

), respectively. The measure of skewness indicates that the data are positively and negatively skewed for cause

, respectively. For computational ease, we have divided each data point by

To check the validity of the model, we compute the the Kolmogorov Smirnov (K-S) statistic whether the Burr XII model is suitable for this data. The maximum likelihood estimates of

based on the two causes of death are (

), respectively. In deaths due to cause

the K-S distance and the associated p-value are

, respectively, and for the deaths due to cause

the corresponding values are

observations in the data. The data are randomly grouped into

) items within each group. We suppose that the pre-determined progressively first-failure censored scheme is given by (

), then a progressively first-failure censored competing risks data of size

groups of death time is obtained as

deaths due to cause 1 and

in Fig. 3. From the Fig. 3 it is clear that the profile log-likelihood function is unimodal and the MLE of

. We start the iteration to solve the Eq.

the Boot-p confidence intervals are

and the corresponding Boot-t confidence intervals are

respectively. Using the two confidence intervals (Boot-p) and (Boot-t), we present the mean of

Fig. 1. The empirical and fitted survival functions for deaths due to cause 1. 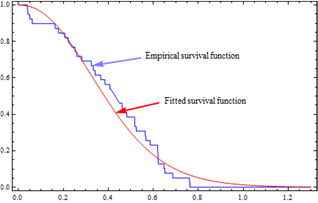 Fig. 2. The empirical and fitted survival functions for deaths due to cause 2. 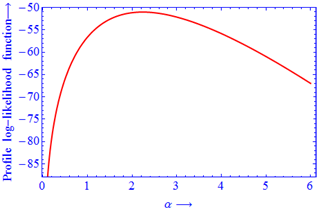 In this section we primarily perform some simulation experiments to observe the behavior of the different methods. Monte Carlo simulations were performed utilizing 1000 progressively first-failure-censored samples for each simulations. The samples were generated by using the algorithm described in Balakrishnan and Sandh [20] using (

. We take into consideration that the progressively first-failure-censored order statistics

. For each data point, we assigned the cause of failure as 1 or 2 with probability (

is then computed from the solution of Equation

using the Newton-Raphson iteration. Once we estimate

, respectively. We compute the average estimates, mean squared errors (MSEs) of the MLE's. The estimated coverage probability, and the average lengths are computed for different methods of estimation. For both Boot-p and Boot-t, we considered

Table 1. The average estimates of

and their mean squared errors (within brackets) of MLE's, for different censoring schemes (

Table 2. The average estimates of

Table 3. The average 95% confidence lengths and the corresponding coverage percentages (within brackets) of Boot-p and Boot-t for different censoring schemes

Table 4. The average 95% confidence lengths and the corresponding coverage percentages (within brackets) of MLE's, Boot-p and Boot-t for different censoring schemes (

In this paper, we have analyzed progressive first-failure-censoring in the presence of competing risks. In particular, we have assumed that the latent failure times under the competing risks follow independent Burr XII distributions with common the shape parameters. We compared different statistical inference procedures and the performance of the unknown parameters based on MLE, Boot-p and Boot-t methods in this setting. We have then conducted a simulation study to assess the performance of all these procedures and a numerical example has been presented to illustrate all the methods of inference developed in this paper. This work can be extended in several directions. Bayesian inference is also possible through the inclusion of suitable prior distributions. Inferences can be extended to allow for more than two causes. Based on the results of the simulation study some of the points are clear from this experiment. Even for some small sample sizes, we observe the following:

The results obtained in this paper can be specialized to: (a) First-failure-censored order statistics by taking

, as expected for all the methods, when

increase then the average lengths and the MSEs decrease.

based on different methods.