Abstract: Multicollinearity is one of the problems or challenges of modeling or multiple regression usually encountered by Economists and Statisticians. It is a situation where by some of the independent variables in the formulated model are significantly or highly related/correlated. In the past, methods such as Variance Inflation Factor, Eigenvalue and Product moment correlation have been used by researchers to detect multicollinearity in models such as financial models, fluctuation of market price model, determination of factors responsible for survival of man and market model, etc. The shortfalls of these methods include rigorous computation which discourages researchers from testing for multicollinearity, even when necessary. This paper presents moderate and easy algorithm of the detection of multicollinearity among variables no matter their numbers. Using Min-Max approach with the principle of parallelism of coordinates, we are able to present an algorithm for the detection of multicollinearity with appropriate illustrative examples.

Modeling usually involves more than one independent variable and in many cases, researchers find it difficult to select most significant variables among all. The process is called Parsimony in Econometrics. In other field of endevour, due to inadequate knowledge of Modeling, some researchers neglect harmful effect of multicollinearity in the model formulated. According to literature, this may result to inappropriate model, erroneous conclusion and sometimes insignificant parameters with significant model (Hawking and Pendleton, 1983; Kennedy, 2002; Gujrati, 2004; Vaughan and Berry, 2005). According to Belsley (1991), multicollinearity can lead to large changes in a model, even, resulting to changes of sign of parameter estimates. The best regression models are those in which the independent variables each correlate highly with the dependent (outcome) variable but correlate at most only minimally with each other, such model is often called "lownoise" and statistically robust (Kock and Lynn, 2012). Multicollinearity is commonly encountered by researchers when dealing with modeling which involves more than one independent variable. By definition, it is a situation where independent variables in a model are highly and significantly related (Wetheriletal, 1986; Draper and Smith, 2003). In the past and recent time, a lot of methods exist for the detection of multicollinearity and many researchers suggested ways of curbing the menace which include remodeling and parsimony. See Montgometry, et al (2001).

Statistical issue with multicollinearity is fairly simple. The unique effects of individual predictors are estimated by holding all other predictors constant and thus ignoring any shared variance between predictors. A regression model uses information about the variation between predictors and the associated variation in the outcome (y variable) to calculate estimates. As n (the number of participants or cases or sample size) increases, the more information and the greater the statistical power of the analysis. If multicollinearity is present, then, each data point tends to contribute less information to the estimate of individual effects than it does to the overall analysis.

Methods used by researchers for the detection of multicollinearity in modeling include;

All the methods have proven to be suitable and have been used for a very long time, especially, in applications. Considering the steps involve in the computation using the methods, researchers with phobia for lengthy calculation or computation often find it difficult to compute the process most especially, Eigenvalues which involves matrix operation and Variance Inflation Factor (VIF) which involves computation of coefficient of determination for all possible regression (Brien, 2007). Product moment correlation involves computation of correlation between variables and test of significance of the correlation value (Belsley, 1991; Kumar, 1975).

Economists and Policymakers often use regression for modeling and are much familiar with Product Moment Correlation or Variance Inflation Factor for the detection of multicollinearity. Some as a result of ignorance, copy verbatim the output of software without investigation or test of multicollinearity. Close contact with some of the researchers reveals it was deliberate action to prevent tedious computation or to boycott mathematical computation. This calls for more friendly approach of the detection of multicollinearity in modeling to prevent reoccurrence of such act and prevent future occurrence of such action due to transfer of knowledge by the trainers who are not well equipped in the field of modeling or statistical computing.

In this paper, a new approach to the computation or detection of multicollinearity is presented with 5-steps algorithm which is user friendly and requires less mathematical rigor.

The method is called "Min-Max". Min-Max involves computation of gradient of line drawn using the points/observations of the variables of interest. In the principle of coordinates, two lines are said to be parallel if their gradient is equal and perpendicular if the product of their gradients is negative 1 (MathCentre, 2009).

Two lines are said to be parallel if they have common gradient and perpendicular if the product of their gradients is equal to -1[Mathcentre, 2009]. 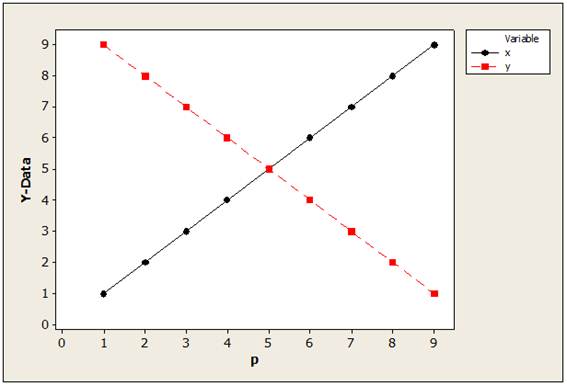 As shown in figure1, the lines are not parallel as they meet at a point and one should not expect their gradient to be equal. Then, how can multicollinearity be detected using the parallelism principle?

Min-Max: using maximum point and minimum points in the independent variables of interest.

Point-coordinates: this is used to detect parallelism of lines formulated as a result of min-max which eventually serves as point coordinates.

Rearrange the observations in ascending order.

Attach serial numbers to the observations.

Proof that the lines are parallel using coordinates of points.

Note that Gradient is equivalent to ratio of range of variables if minimum and maximum points are used in the computation of gradient. That is,

If change in Y and change in X are computed using Min-Max.

Using the data below, show whether the variables are significantly related with the aid of Min-Max.

L1 not same as L2 which implies the lines drawn from the observations are not parallel and thus, the variables are significantly related. Therefore, multicollinearity exists. 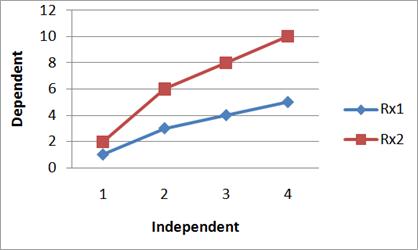 Figure 2. Scatter Plot of the observations from the two variables.

The figure shows that the lines drawn from the coordinates are not parallel to each other which implies the lines could meet if extended beyond the present length. It is an indication that the variables are significantly related and should not be combined in modeling or multiple regression. The figure supports the conclusion from Min-Max computation using gradient of the coordinates.

Point of coordinates can be detected from the lines drawn from observations, extreme values are considered to get perfect result. As shown in the figure 3, more variables can be accommodated which qualifies the method for multivariate approach. The figure shows that lines produced by the observations of the variables are not parallel therefore, they are related and that can be tagged multicollinearity among independent variables. Applying existing method; Product Moment Correlation, for the data on Table 3, we now obtained;

Considering proposed method with existing method, Product Moment Correlation was used as it is one of the existing methods for the detection of multicollinearity among independent variables. As shown in Table 4, Product Moment Correlation shows that the variables are significantly related which proves the existence of multicollinearity among the variables. This is in line with the conclusion of the proposed method but the proposed method is better as it is easy to compute with diagrammatic illustration.

Multicollinearity is a problem in modeling which can render a model formulated useless and if care is not taken, researchers may not know that the model is faulty. Ignoring the rigor of lengthy computation, Min-Max as presented can be used to detect multicollinearity. The algorithm can be used for both univariate and multivariate with fewer rigors. The propose method can be used by even non-mathematicians as it requires less/ non-rigorous computation. This made it superior to other existing methods.

It is widely acceptable to use any point at the line of observations for the computation of gradient especially when dealing with straight line. Therefore, the concept of Min-Max is mathematically accurate in the computation of gradient points. Also, based on the statement on parallel line, it is adequate to use position of lines for conclusion whether two or more variables are related or not (linearly related).

In another context, the algorithm can be used by researchers in other fields of endevour for the determination of fixed points of locations. It shows the link between range and gradient when minimum and maximum points are used. Therefore, it is not only good for detection of multicollinearity but also fix-point determination.