Abstract: The most important assumptions about econometrics and time series data is stationarity, This study therefore suggests that, in trying to decide by classical methods whether economic data are stationary or not, it would be useful to perform tests of the null hypothesis of stationarity as well as tests of the null hypothesis of a unit root. The study compared power and type I error of Augmented Dickey-Fuller (ADF), Kwiatkowski, Phillips, Schmidt and Shin (KPSS) and Phillips and Perron (PP) to test the null hypothesis of stationarity against the alternative of a unit root at different order of autoregressive and moving average and various sample sizes. Simulation studies were conducted using R statistical package to investigate the performance of the tests of stationarity and unit root at sample size 20, 40, ..., 200 at first, second and third orders of autoregressive (AR), moving average (MA) and mixed autoregressive and moving average (ARMA) models. The relative performance of the tests was examined by their percentage of their powers and type I errors. The study concluded that PP is the best over all the conditions considered for the models, sample sizes and orders. However, in terms of type 1 error rate PP still is the best.

Autoregressive and moving average models are mathematical models of the persistence, or autocorrelation, in a time series. The models are widely used in, econometrics, hydrology, engineering and other fields. There are several possible reasons for fitting AR, MA and ARMA models to data. Modeling can contribute to understanding the physical system by revealing something about the physical process that builds persistence into the series. The models can also be used to predict behavior of a time series or econometric data from past values. Such a prediction can be used as a baseline to evaluate the possible importance of other variables to the system. They are widely used for prediction of economic and industrial time series. Another use of AR, MA and ARMA models is simulation, in which synthetic series with the same persistence structure as an observed series can be generated. Simulations can be especially useful for established confidence intervals for statistics and estimated econometrics quantities.

The outcomes of this research will assist a researcher to understand which of the tests of stationarity can be used for a particular order of autoregressive and moving average models and at what sample size is reliable.

An autoregressive model is simply a linear regression of the current value of the series against one or more prior values of the series. The value of (p) is called the order of the AR model. AR models can be analyzed with one of various methods, including standard linear least squares techniques.

Assume that a current value of the series is linearly dependent upon its previous value, with some error. Then we could have the linear relationship

The general moving average model can be given as follows;

We call such a series a moving average of order q and generally represented by MA(q). The terminology moving average arises from the fact that Xt is obtained by applying the weight

Moving average model was first considered by [4] and later by [5].

In some application, the autoregressive or moving average model discussed in previous sections becomes cumbersome because we may need a higher order model with many parameters to adequately describe the dynamic structure of the data. To overcome these, Autoregressive Moving Average Model (ARMA) models are introduced [6]. Basically an ARMA model combines the ideas of autoregressive and moving average models into a compact form so that the number of parameter used is kept small. The concept of ARMA model is highly relevant in volatility modeling [7].

If we assume that the series is partly autoregressive and partly moving average, we obtained a quite general time series model (ARMA).

We say that Xt, is an autoregressive and moving average of order p and q respectively. Symbolically, the model is represented by ARMA(p, q).

In Statistics, a stationary process is a stochastic process whose joint probability distribution does not change when shifted in time. Consequently, parameters such as the mean and variance, if they are present, also do not change over time.

The most important assumption made about time series data is that of stationarity. The basic idea of stationarity is that the probability laws that govern the behavior of the process do not change over time. In indeed, the process is statistically equilibrium. Specifically, a process {Yt} is said to be strictly stationary if the joint distribution of Yt is the same as that of Yt−k for all t and k;

Based on these, the parameter of autoregressive model fixed for our simulation were derived as p

The first order autoregressive is stationary when

obtained from the characteristic equation

and the corresponding AR characteristic equation

It may be shown that, subject to the condition that et is independent of Yt−1, Yt−2, Yt−3,..., a stationary solution to Equation (4) exists if and only if the roots of the AR characteristic equation exceed 1 in absolute value (modulus). We sometimes say that the roots should lie outside the unit circle in the complex plane. This statement will generalize to the pth-order case without change

In the second-order case, the roots of the quadratic characteristic equation (6) are easily found to be

The test statistic is

is the least square estimate and SE(

) is usual standard error estimate The test is a one-sided left tail test. If yt is stationary (i.e.

is computed it can be compared to the relevant critical value for the Dickey–Fuller Test. If the test statistic is less (this test is non symmetrical so we do not consider an absolute value) than the (larger negative) critical value, then the null hypothesis of α = 0 is rejected and no unit root is present. [11]

Under the null hypothesis of

the test statistic is

2.5. Methods of Simulations and Analyses

are present responses simulated from random samples of normal distribution and

are past responses of first and second order respectively.

is a random error which is known as white noise which is also distributed from normal distributions as follows:

For the simulation study, the choice of parameters considered by [9] was considered to ensure stationarity of the data generated for AR, MA and ARMA models. These are fixed as fixed as 0.1, 0.2, 0.3 and 0.5. The sample sizes simulated from each models are;

. At a particular choice of sample size, the simulation study was performed 5000 times for different models.

Different methods of stationarity/ unit root tests were used to analyze each set of data simulated. The test statistic are ADF, KPSS and PP, the comparison were made by counting the number of times each test accepted the stationarity of the data simulated in 5000 replication. The percentages of their acceptance were recorded in table 1-6 for each case of the models, orders of autoregressive and moving average and sample sizes. The test with higher acceptance was considered as the best.

The variation in comparison of three stationarity/unit root tests will provide an indication of the sensitivity of the methods. Thus, the best method(s) were recommended for the research with various sample sizes, models and orders of autoregressive and moving average.

The outcomes of this research will assist a researcher to understand which of the tests of stationarity can be used for a particular order of autoregressive and moving average models and at what sample size is reliable.

The results of the three methods of stationarity tests were presented in table 1 – 6 for the first, second and third orders of AR, MA and ARMA models. Data were simulated using R software package, to investigate the performances ADF, KPSS and PP on the simulated data at sample size 20, 40, 60, 80, 100, 120, 140, 160, 180 and 200. The relative performance of the tests were observed at order (p) = 1, 2 and 3 for data generated from different forms of autoregressive (AR) moving average (MA) and autoregressive moving average models (ARMA). The assumptions of stationarity were observed for cases of data generated. The relative performance of the stationarity tests was examined. The experiments were repeated 5000 times for the three Statistics and each sample size. The percentages of their acceptance were recorded in table 1-6 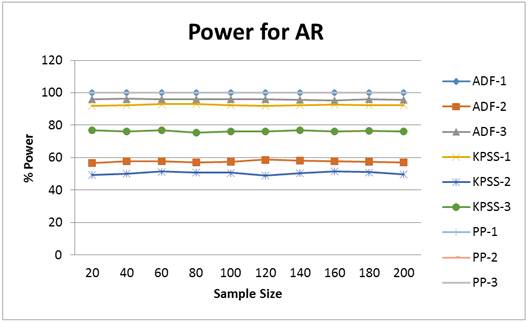 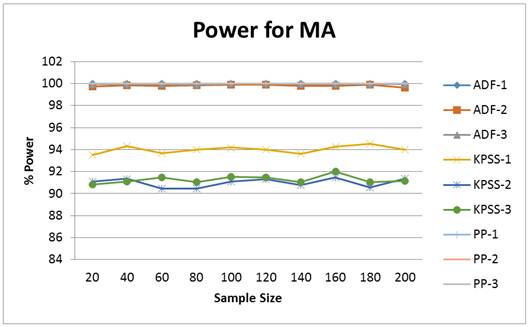 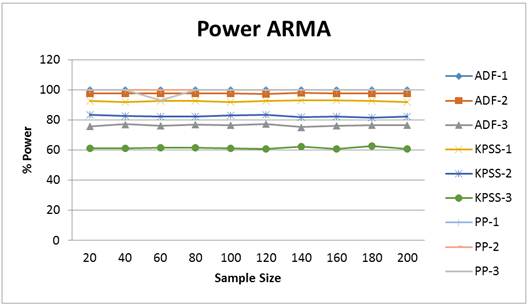 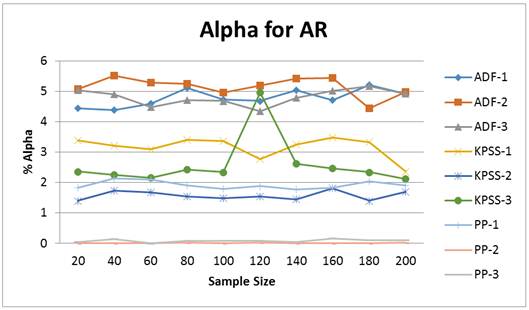 Fig. 4. Type I error of Stationarity Test in AR models of Different Orders. 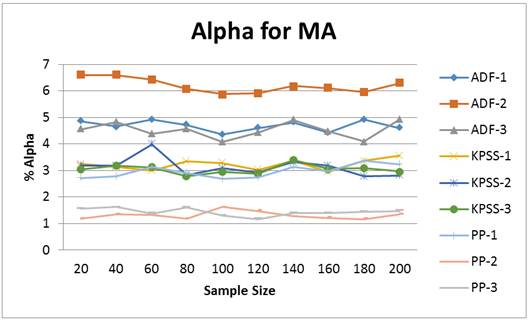 Fig. 5. Type I Error of Stationarity Test in MA models of Different Orders. 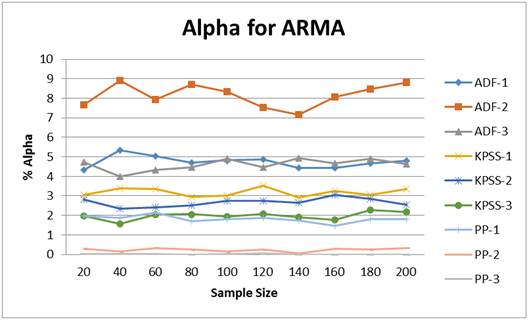 Table 4 presents the empirical percentage type 1 error rate of the test over the sample sizes and order for Non-stationary AR models, the main focus here is to compare the empirical type 1 error rate with the nominal 5%. Out of all the test procedures only PP produced a reasonably closer estimate to the nominal 5% level with considerably improvement as the order increases. The worst of all the test procedure is ADF under this condition. Table 5 also presents the result under Non-stationary MA models, PP seem to produced the best estimate but not as in table 4 them followed by KPSS and ADF is the worst. Finally, table 6 presents ARMA results on empirical percentage type 1 error rate, PP test is still to be the best procedure under this condition but the performance seems to be poor at order 1.

Also, from Fig 1—6 have the same results as stated in table 1—6 above.

The PP is better applied since it produced reasonably high power and closer estimate of type 1 error to the nominal value. The above conclusion implies that pp test correctly rejects and at the same time identifies when not to reject.