Abstract: This project considers the parameter estimation problem of test units from Kumaraswamy distribution based on progressive Type-II censoring scheme. The progressive Type-II censoring scheme allows removal of units at intermediate stages of the test other than the terminal point. The Maximum Likelihood Estimates (MLEs) of the parameters are derived using Expectation-Maximization (EM) algorithm. Also the expected Fisher information matrix based on the missing value principle is computed. By using the obtained expected Fisher information matrix of the MLEs, asymptotic 95% confidence intervals for the parameters are constructed. Through simulations, the behaviour of these estimates are studied and compared under different censoring schemes and parameter values. It’s concluded that for an increasing sample; the estimated parameter values become closer to the true values, the variances and widths of the confidence intervals reduce. Also, more efficient estimates are obtained with censoring schemes concerned with removals of units from their right.

"According to Horst, a data sample is said to be censored when, either by accident or design the value of the variables under investigation is unobserved for some of the items in the sample."[1] Inference based on censored sampling has been studied during the past over 50 years by numerous authors for a wide range of lifetime distributions.

In this study, we assume that the lifetimes have Kumaraswamy distribution. This distribution was introduced by Kumaraswamy as a probability density function for double bounded random processes. [2] This distribution is applicable to many natural phenomena whose outcomes have lower and upper bounds, such as the heights of individuals, scores obtained on a test, atmospheric temperatures, hydrological data etc.

The two parameter Kumaraswamy distribution has a PDF and CDF given respectively by;

Kumaraswamy and Ponnambalam et al. [2, 3] have pointed out that depending on the choice of the parameters, this distribution can be used to approximate many distributions, such as uniform, triangular, or almost any single model distribution and can also reproduce results of beta distribution. The basic properties of the distribution have been given by Jones. [4]

Most recently, Mostafa et al [8] derived parameter estimators of Kumaraswamy distribution based on general progressive type II censoring scheme using maximum likelihood and Bayesian approaches. Also, some of the recent work on progressive censoring include but not limited to [9-14]. As far as we know, no one has described the EM algorithm for determining the MLEs of the parameters of the Kumaraswamy distribution based on progressive type-II censoring scheme.

The purpose of this study is to estimate the shape and scale parameters of the Kumaraswamy distribution under progressive type-II censoring using the EM algorithm and to compare the results under different censoring schemes.

In this work, we propose to use EM algorithm for computing MLEs. This is because the EM algorithm is relatively robust against the initial values compared to the traditional Newton-Raphson (NR) method. [15, 16] For some of the recently relevant references on EM algorithm and censoring include [17 and 20].

The integer m < n is ﬁxed at the beginning of the experiment and they are the units which are observed completely until failure.

The censoring occurs progressively in m stages. These m stages offer failure times of the m completely observed units. At the time of the first failure (the first stage),

surviving units are randomly withdrawn from the experiment. At the time of the second failure (the 2nd stage),

surviving units are withdrawn and so on. Finally, at the time of the

stage), all the remaining

surviving units are withdrawn. According to Childs and Balakrishnan, we refer to this as progressive Type-II right censoring with scheme

denote a progressive Type II censored sample from Kumaraswamy distribution. Then according to [21] the likelihood function based on

progressively Type II censored sample is given by;

From equations (1) and (2), the likelihood function based on progressive Type II censored sample is as follows;

The log-likelihood function of equation (4) can be written as follows:

We propose the EM algorithm, introduced by Dempster et al. [22] to find the MLEs.

be the censored data.

We consider the censored data as missing data. The combination (X, Z) = W forms the complete data set. The log-likelihood function based on W can be written respectively as:

In the E-step, one requires to compute the pseudo-likelihood function. This can be obtained from

by replacing any function of

the conditional distribution of

follows a truncated Kumaraswamy distribution with left truncation at

Therefore the conditional expectations in equations (6) and (7) can be obtained as follows:

Thus, in the M-step of the

iteration of the EM algorithm, the value of

is first obtained by solving the following equation:

is obtained by solving the equation

2.4. Asymptotic Variance-Covariance Matrix of the MLEs

For such a case, the log likelihood function based on X is obtained as follows;

Using equation (13), the Fisher information matrix for the complete data set is given as;

are the digamma and trigamma functions respectively.

In this work, we are interested in deriving the asymptotic variance–covariance matrix for the MLEs based on the EM algorithm. For this we will use the procedure that was established by Louis and Tanner. [23, 24] The idea of this procedure is given by

denote the complete, observed, and missing (expected) information, respectively, and η = (θ, λ). The Fisher information matrix for a single observation which is censored at the time of the

failure is given by

is given in Equation (8). The expected values of the second partial of the log-likelihood function of Z given X are calculated as follows;

is a function of

and η, since the expectation is taken with respect

Therefore, the variance–covariance matrix of parameter η can be obtained by

Using equation (21) an approximate 100(1−α) % confi-dence intervals for θ and λ is obtained respectively, as;

is the percentile of the standard normal distribution.

In this section a simulation study is conducted to investigate how the above estimators perform in estimating the parame-ters of Kumaraswamy distribution based on progressive type II censored data. The samples were generated based on the algorithms of Balakrishnan and Sandhu and Aggarwala and Balakrishnan (1998). [25, 26] The censoring schemes con-sidered are given in table 1 below; 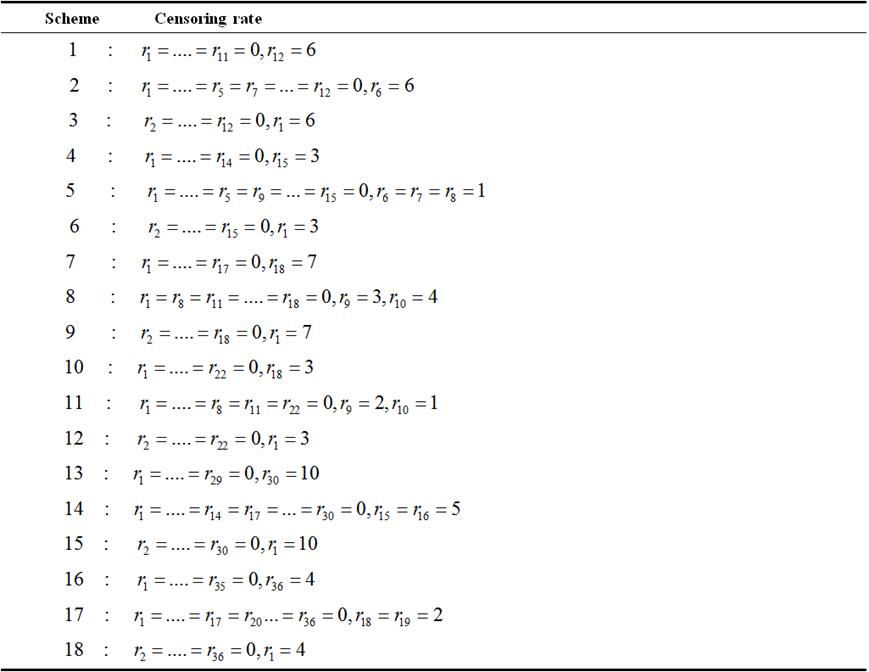 All the computational results were computed using R software

Table 2. MLEs, variances and confidence intervals of MLEs of Kumaraswamy distribution when λ=0.6 and θ=1.0. 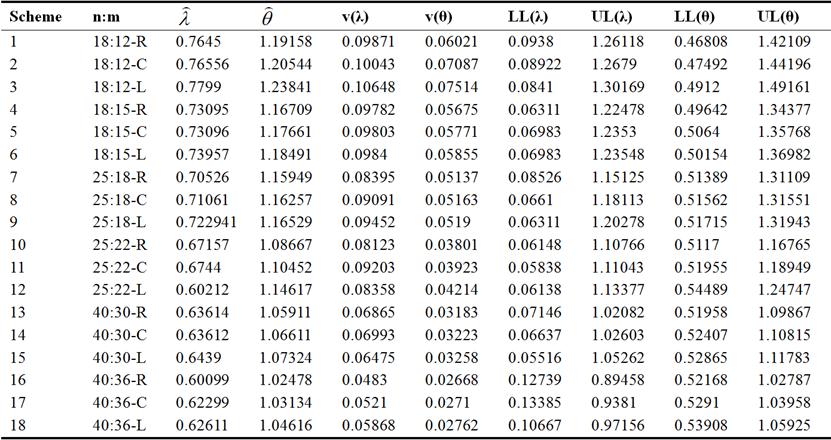 From table 2, it is observed that irrespective of the censoring rate and the position at which the censored units are removed from the sample, for increasing sample size;

(i) the estimated value of the parameter becomes closer to the true value,

(ii) the variances of the MLEs decrease

Table 3. Effect on the Confidence intervals of the estimates.

Table 3 clearly shows that the widths of 95% confidence intervals tend to be lesser as the sample size increases.

Table 4. Effect of the number of censored units on estimates.

Table 5. Effect of position of removal of units in the scheme on estimates.

Table 6. MLEs, variances and confidence intervals of MLEs of Kumaraswamy distribution when λ=2.2 and θ=3.5. 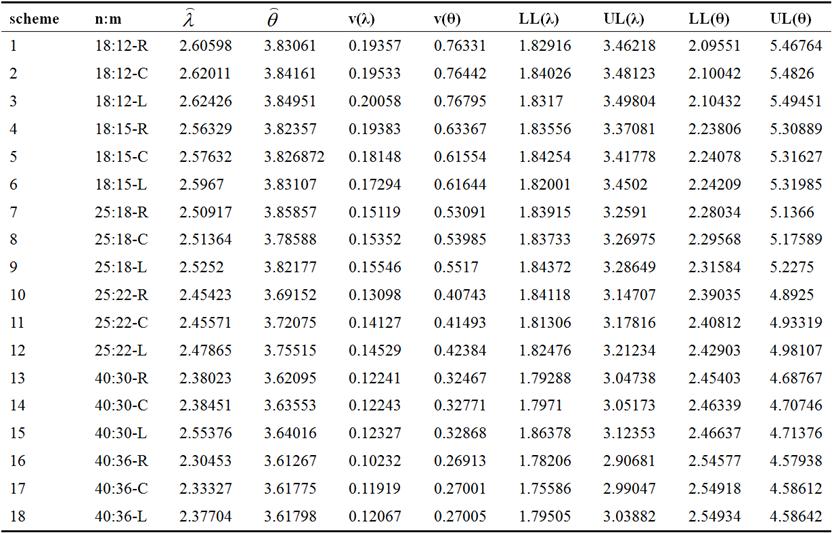 Table 6 also shows that for increasing sample size the estimated value of the parameter becomes closer to the true value and the variances of the MLEs decrease.

However, these variances are much higher than those obtained in table 2.

Table 7. Effect on the Confidence intervals of the estimates.

The widths of the confidence intervals are also higher under these set of parameter values and tend to be lesser for an increasing sample size.

Table 8. Effect of the number of censored units on estimates.

Table 9. Effect of position of removal of units in the scheme on estimates.

The removal of units in scheme 7, 8 and 9 was done at the 18th, 9th and 10th, and 1st failures respectively and from the results it was observed that scheme 7, gave a better estimate followed by scheme 8 and finally scheme 9. This trend was observed to cut across all the censoring schemes i.e all the right censored schemes resulted in better estimates followed by centre censored and left censored in that order.

This study has addressed the problem of estimation of parameters of the Kumaraswamy distribution based on progressive Type-II censored data. It is shown that the MLEs of the scale and shape parameters can be obtained by using EM algorithm.

A comparison of the MLEs and their variances as well as their confidence intervals is made by simulation for different censoring schemes. It is observed that:

i. for an increasing sample size, the estimated value of the parameter becomes closer to the true value, the variances of the MLEs decrease and the widths of the confidence intervals become less.

ii. better estimates are obtained when the removal of units is from the right, followed by those at the centre and poorest for those removed from the left.

iii. reducing the number of units to be removed in the censoring scheme, leads to better estimates for a fixed sample size.

iv. an increase in the true parameter values leads to estimates with large variances and increased widths of the confidence intervals.