Consider a population of N elements identified by a set of indices U = {1, 2,…, N}. Associated with the

unit in the population are two variables (

has some unknown values and it is the variable under study. The variable

is the auxiliary variable assumed to be known for all units of the population. A simple random sample without replacement (SRSWOR) of size n denoted as

is drawn from the population. Suppose that

are observed (respondents) and

are missing (non-respondents). That is

do not respond. Therefore

The NNI method imputes a missing

is the nearest neighbor of j measured by the

. If there are tied

values, then there may be multiple nearest neighbors of

is randomly selected from them. Suppose that

is imputed for the missing

The completed data set is

. If the survey has 100% response, then the populations mean

is estimated by the sample mean

and its variance is estimated by

In the presence of non-response, the customary approach to point estimation is to take the formula for 100% response and calculate it on the completed data set. Thus from (2), the estimator of

is the number of times the

is defined by (1). This variance estimator can be biased.

denote the sampling design, that is,

is the known probability of obtaining a sample

denote the SRSWOR design. Given

, denote the response mechanism by

is the unknown conditional probability that the response set

is obtained. We assume that

may depend on the auxiliary variable

but not on the values

. The total error (sum of sampling error and imputation error) of

Thus the bias of

is small when no respondent is used too often as a donor of an imputed value.

The jackknife variance estimator of

[8]. In the presence of non-response to item y, the use of the above estimator may lead to serious underestimation of the variance of the estimator, especially if the non-response rate is important. [11] proposed an adjusted jackknife method that is calculated in a similar fashion as the above estimator except that, whenever a responding unit is deleted, the imputed values are adjusted. The imputed values are unchanged if a non-responding unit is deleted. Let

when unit j was deleted. For mean imputation, we have

denotes the mean of the respondents excluding unit

. The Rao-Shao jackknife variance estimator is then given by

The bootstrap method is estimated by

[3] proposed a rescaling Bootstrap method in order to estimate the Variance. Their method draws bootstrap samples of size

with replacement from the rescaled sample

may be different from

. The rescaling factor, denoted by

, is chosen so that the variance under re-sampling matches the usual variance estimator of the population mean.

The Rao-Wu bootstrap variance estimator is given by

. Applying the Rao-Wu bootstrap in the presence of missing responses and treating the missing values as true values, may lead to serious underestimation of the variance of the estimator. In the presence of imputed data, [12] proposed a bootstrap procedure for imputed survey data. The Shao-Sitter bootstrap variance estimator is given by

. In the absence of non-response, we assume SRSWOR with mean

Variable y is only observed for a subset

according to a response mechanism

. This subset of size

is called the set of respondents (or donors) while its complement

is called the set of non-respondents (or recipients). To compensate for the missing

values, donor imputation is performed. This leads to the imputed estimator of the mean given by

is the donor used to impute the recipient

. A variety of strategies can be considered in practice in order to find donors for imputing recipients. Usually, a vector

of auxiliary variables, available for all the sample units

, is used to determine a set

of selected donors that are "close" to the corresponding recipients in

To evaluate properties of the imputed mean estimator

and to make inferences, the following imputation model is used:

indicates that the expectation, variance, and covariance are evaluated with respect to the imputation model,

is the N-row matrix containing

are parametric or non-parametric smooth functions of

. Note that the subscript

indicates missing values and should not be confused with the imputation model.

contains variables used at the imputation stage for the selection of donors. In principle, the imputer uses available variables that are associated with the y-variable. The vector

may thus contain design variables (e.g., strata and cluster indicators, size measure), the domain of interest or other auxiliary variables. It is assumed in model (5) that the imputer has appropriately chosen the vector

. This allows us to treat the design variables and the domain(s) of interest as being fixed under model (5).

Considering model (5), the total error of

can be broken down into sampling error and imputation error as shown in (4).

values and on the unknown model parameters

. Therefore to estimate the three components of the variance, all we need to provide are the model unbiased estimators of

However, this will not completely lead to an explicit variance estimator since we still have to obtain expectations of some terms with respect to response mechanism.

are model unbiased estimators of

Hence an unbiased estimator of 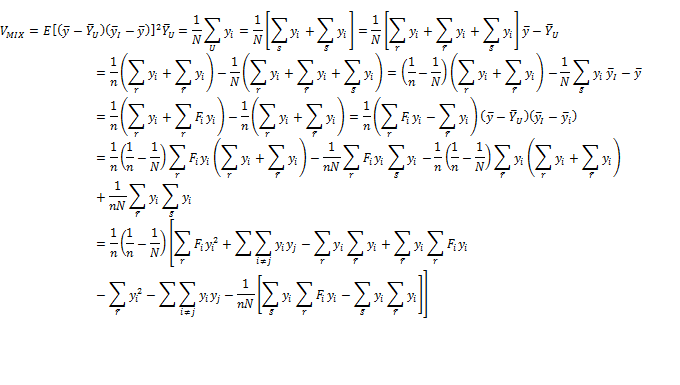 It follows that the unbiased estimator of

The estimator for the Variance is given by

One of the most common methods in non-parametric regression is the kernel method introduced by Nadaraya-Watson (1964), which is often obtained by using a bandwidth [7]. The kernel estimators with varying bandwidths are specially used to estimate density of the long-tailed and multi-mod distributions. A kernel estimate is introduced for obtaining a non-parametric estimate of a regression function.

A smooth linear estimate of a function

can be written in general form as

Nadaraya (1964) and Watson (1964) independently proposed the following estimate of

where k denotes the bandwidth parameter.

is called the kernel function with the following properties.

The estimate of the residual term is given by

The square of the estimate of this residual term

, we choose a smooth function

with a bandwidth parameter

which is a smooth estimate of

The estimator for the Variance is given by

are as given above.

The first population (linear population) was generated as follows: 100 data points were generated according to the linear homoscedastic model;

This was done by first generating the auxiliary variables

values and then the values for

. In the second population structure (non-linear population), 100 data points were generated according to the quadratic homoscedastic model;

A simple random sample of size 0.225 of the population size was taken without replacement from each population structure. We considered two non response mechanisms which are random and non random non-response.

For a random non-response mechanism, non responses were generated using independent Bernoulli trials with a constant parameter 0.3 representing the probability of non-response.

For a non random non-response mechanism, the sample values were arranged in order of magnitude using

values and then the largest 30% of the values were regarded as missing.

Non responses were generated for each non-response mechanism. To compensate for the missing values, nearest neighbor imputation was performed. After imputation, the four variance estimates

were calculated. The experiment was repeated 1000 times independently and the average value of each value was got. In the case of bootstrap estimator, 1000 bootstrap iterations were used. In the instance of donor estimator, we used the bandwidth parameter that minimized the mean squared error and satisfied Silver-man’s (1986) condition.

was used since it gives optimal solutions.

is the value of

represents the value of the estimator for the

a)  Case when population is linear. 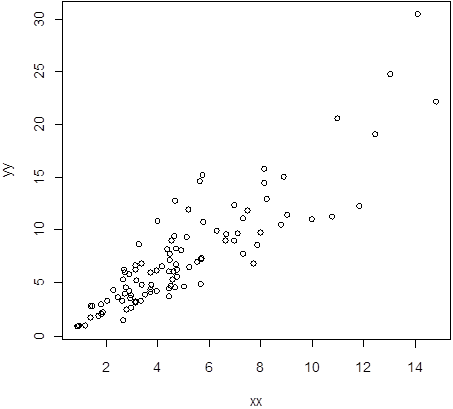 b)  Case when population is real 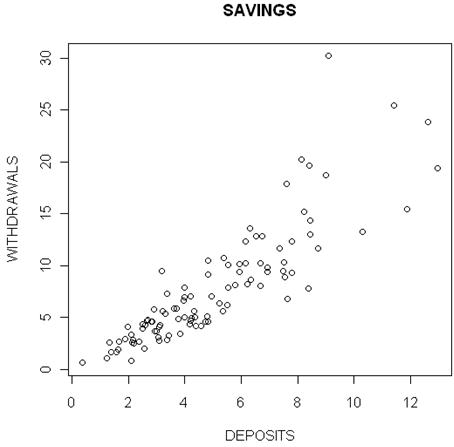 Fig. 2. Graph of withdrawals against deposits.

The results of Table 2 are similar to those of Table 1. This implies that whether the population is real or artificial, as long as it is linear, the estimators behave in the same way. 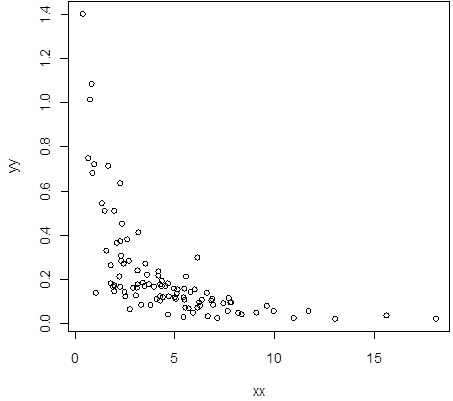 Discussion of the results