Abstract: This paper provides numerical simulation of flow around a Groyne and models the ratio of the reattachment length, water depth and velocity on the surface of the channel and the shear stress on the bottom of the channel between the different types of Groynes in the same hydraulic condition for all models. Moreover, a comparison between the results have been done and the most efficient type of Groynes which have more influence on the hydraulic parameters is chosen. The open source TELEMAC-3D software is used for this numerical modeling and k-ε model was selected for turbulence modeling of the flow simulation. For validation test, our results are compared against three-dimensional computational flow model around a Groyne by Ouillon and Dartus [10] and experimental result of Holtz [5]. This paper provides a good modeling tools to choose the optimum shape and size for Groynes in rivers for bank protection and river stream training.

Groynes are hydraulic structures with different material, type, shape, size and dimension. Recently, many researches have been done experimental and numerical modeling on groynes and flow around them. Their results show that using different type of groynes in the river has impressive influence on the behavior of the flow in downstream of the river. The most important one which has significantly effect on the water flow and should be considered is the separation zone.

The separation zone (vortex) is the major part of a turbulence flow in the fluid dynamic studies. This zone is usually occurred in parts of fluid with high Reynolds number, and has most rotation in alternating directions. Two alternative methods are normally available for modeling turbulence conditions. First one is the Large Eddy Simulation (LES) and second one is the turbulence modeling, in which, second method solution is based on five approaches called as zero equation models, one equations models, two equations models, Reynolds-stress/flux transport equations models and algebraic stress/flux models. In fluid dynamic studies one of the famous method is the k-ε method (two equations models), the most advantage of this method is stable calculation that easily relative converges and Reasonable predictions fluid fields. Therefore, in this study, the k-ε approach is used for modeling the turbulence of flow. Furthermore, surface velocity, water depth and shear stress around groynes, were calculated. Finally influence of groynes shapes on the turbulence as well as reattachment length for each type of groynes are compared and discussed.

3D Numerical modeling of flow around vertical groynes by Ouillon and Dartus [10] are used as reference to validate the TELEMAC-3D software. The Ouillon and Dartus used a rectangular channel with 30 m length, vertical smooth wall and the manning coefficient of the bottom of channel was 0.02

Figure 1. Experimental shape of the channel and the TELEMAC-3D numerical modeling.

The TELEMAC software has been developed by the Department Laboratorie National d´Hydrauliquie (LNH) at the Electronic de France Direction des Etudes et Recherché (EDF-DER). The software system is owned by EDF-R&D and this software available as the open source software. The TELEMAC system is able to solve shallow water equations, (TELEMAC-2D) and Navier-Stokes Equations (TELEMAC-3D), the basic solution procedure in the TELEMAC-3D system is divided in four steps by solving the Reynolds-averaged Navier-Stokes equations (equations 1 to 4). In the first step, velocity advections is calculated by the momentum equation and in the second step the diffusion and source terms are solved and in the last step, water depth is computed by continuity equation and momentum equation which integrated along vertical direction, for more detail refer to the J.-M. Hervouet [5].

Where P is the pressure [N/m2] and

is the reference density [kg/m3],

is the turbulence viscosity and

are source terms such as the Coriolis force and buoyancy.

U, V, and W are the Cartesian velocity components of the velocity

[m/s], the friction will appear later as boundary condition of the diffusion terms, with a hydrostatic pressure assumption.

In order to model Holtz experimental test by TELEMAC-3D, the mesh of this channel generated by the BLUE KENUUE software. The triangular cells are used in this model. The mesh size in this model vary between 0.04-0.05 m for each side and this size is constant in the whole domain. Also for computing turbulent condition, the k-ε model takes into account for horizontal and vertical scheme. The time step was set to 0.1s, the TELEMAC3D was configured with 4 horizontal levels along the depth, the liquid boundary conditions were the constant discharge for the inlet and the constant height for the outlet of the channel. The non-hydrostatic version of TELEMAC-3D was used. Amount of the manning coefficient was 0.02

for the bottom and the smooth wall with the no friction was selected for the lateral boundary conditions.

Figure 2 shows the comparison between three results of the experimental model (Holtz [5]), the numerical modeling Ouillon and Dartus [10] and the result of the TELEMAC-3D modeling. This Figure clearly shows that TELEMAC-3D result is very close to the experimental result, but it slightly overestimate iso-lines related to 0.233 m water height.

Figure 2. Water depth in the channel.

The velocity profiles at Z=0.17 m above the bottom of the channel have depicted in Figure 3 which shows the TELEMAC-3D result is so close to the experimental result.

Figure 3. Velocity at the 0.17 m above the bottom of the channel.

The reattachment length is the dimensionless parameter and defined as the ratio of the flow separation length to the groyne length. The separation length is defined as the distance from downstream side of the groyne to the zone that velocity becomes zero. In this test the reattachment length was calculated by the TELEMAC-3D, is 11.54 and the amount of the reattachment length was modeled by Ouillon and Dartus [10], is 10.7 and the experimental value, was obtained by Holtz [5] is 11.5 which demonstrate that the result from TELEMAC-3D modeling is very close to the experimental result. The final results are shown in the Table 1.

3. A New Numerical Modeling with TELEMAC-3D

Now, we want to define new numerical models that show the influence of different shape of groynes on the flow parameters like water velocity and water depths. For this purpose, different types of groynes are divided into two groups. The first group contains groynes with the flanges where length of these flanges varies in the different size and direction while the second group contains groyne without flanges but the width of groynes changes in the different size. Totally 10 different types of groynes were modeled. Figure 4 shows detail of these modelled groynes which can be classified into five different groups as T-shape, L-shape, rectangular, triangular and trapezoidal. In T-shape group only the flange of the T-shape is changed, in L-shape group the size and direction (flanges in the right direction or flanges in the left directions) of flange is differs while in the rest only one type for each group will be considered. In the following, we will model the effect of these different shapes on water velocity and water depth and results will be presented in figures 5-10. 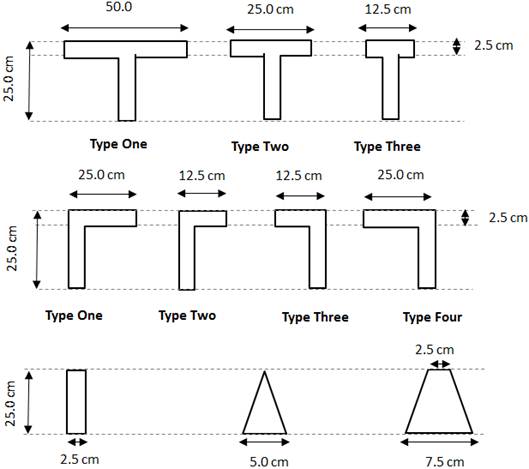 Figure 4. Different type of the T-shape, L-shape and rectangular, triangular and trapezoidal shape.

4. Result of Numerical Modeling with TELEMAC-3D 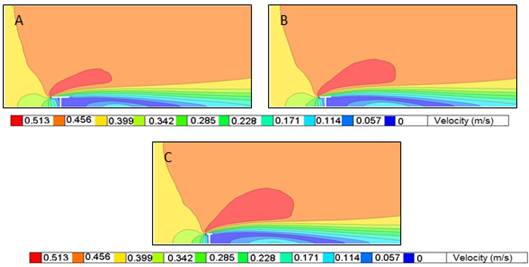 Figure 5. Surface velocity profile in the different T-shape of the groynes.

Figure 6 shows results of TELEMAC-3D software for the L-shape groynes. In the L shapes groynes totally we have two different results, in the first result by increasing the length of the flanges in downstream of the groynes (figure 6-A and figure 6-B), the surface velocity profile is slightly increased in the separation zones near the walls. But in the second results when the flanges of the groynes are located in the right direction (figure 6-C and figure 6-D), the velocity profile increased in separation zones when the length of the groynes becomes shorter.

Figure 7 shows the area of the highest surface velocity (red area) within the channel when the rectangular, trapezoidal and triangular groynes shapes are used. This figure indicate that the triangular groyne shape make the high surface velocity occur in the less area compared with the other two types of the groynes and also less velocity will be expected in the separation zone when using this shape type groyne. It can also be seen that in the channel with the rectangular shape we have maximum velocity area compared with two other types. Moreover in the trapezoidal groyne shape the high surface velocity occurred in separation zone near the wall in downstream of the groyne. 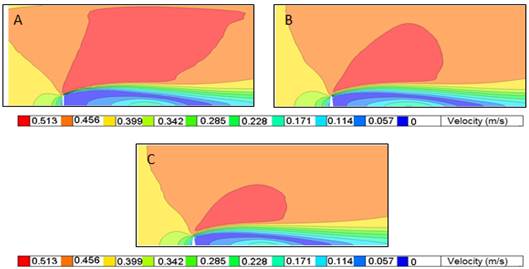 A) The rectangular B) the trapezoidal C) The triangular groyne shape

Table 2. The vortex length and the reattachment length for all types of groynes.

Figure 8 shows the T-shape groynes effects on water depth. It shows that by increasing the length of the flange, the depth of the water is increased in downstream of the groynes. 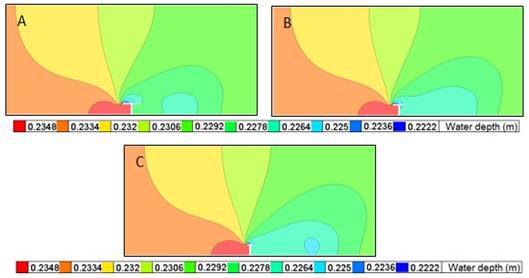 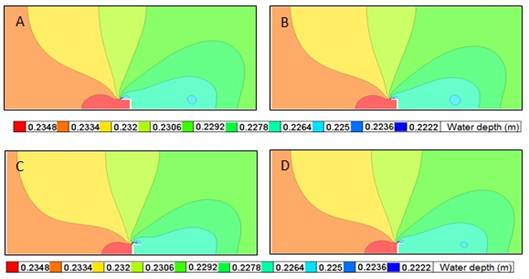 Figure 9. Water depth in different L-shape types of the groynes.

According to the figure 10, the water depth area after the downstream side of the groyne is increased in the channel with the Triangular groyne. 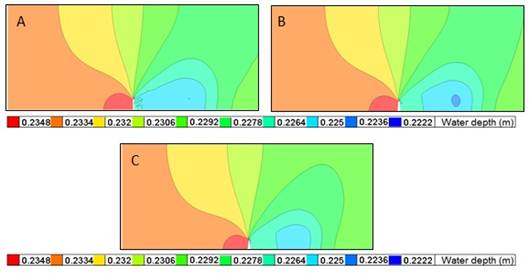 A) The rectangular B) the trapezoidal C) The triangular groyne shape

Figure 10. Water depth in the rectangular.

5. Shear Stress on the Bed of the Channel

). These force depends on height of water (h), water velocity (u) and roughness of the bed. In the theoretical consideration the following steps are used to calculate bed shear stress:

In the first step the friction slope is assumed equal to the bottom slope.

In the second step logarithmic distribution is assumed for velocity distribution near the walls (Prandtl [11] and Von Karman [15]), as shown in the equation 5, 6 and 7.

is the shear velocity,

is expressed as a function of the Nikuradse bed roughness (

is the von Karman constant.

is the density of water [kg/m3], h is the water depth [m], s is the bottom slope and g is the Gravitational acceleration [m/s2].

In this paper for calculating bed shear stress the SYSIPHE software is used.

The SISYPHE software model bed elevation by solving the two-dimensional sediment continuity equation which is called the Exner equation as shown in the Equation 8 (Sisyphe[12]): 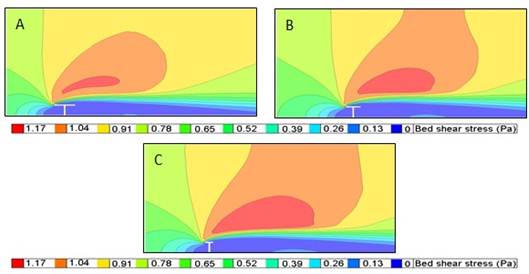 Figure 11. Bottom shear stress in the different T-shape of the groynes.

Figure 12 shows effects of L-shape groynes on the bottom shear stress changes. Figure 12-A and 13-B shows that by increasing the flange length, shear stress decreased on the bed of the channel but in the Figure 12-C and 12-D amount of the shear stress increased when the length of the flange increasing. Also according to the figure 12 the maximum shear stress in the separation zone happened in type C and D. 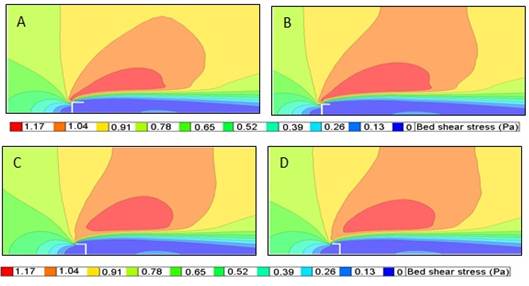 A) The rectangular B) The trapezoidal C) The triangular groyne shape

model was used. The results of the simulation are validated against original model (the Holtz [5]).

• The results from the groynes without flanges (rectangular, trapezoidal and triangular shapes) show that these types create the maximum shear stress on the bottom. It means that maximum scoring will be happened around the groynes, on the right sides of channel and within the separation zone. This also indicates that more shear stress in the bank of the channel can occur using these types of groynes inside a channel. Other results regarding this shape type groyne are:

• The groynes without flanges cause the maximum surface velocity.

• In the groynes without flanges the trapezoidal shape has the maximum erosion in the bank of the channel.

• In the groynes without flanges the rectangular shape has the maximum reattachment lengths compared to the other types of the groynes.

• The length of the flanges in the groynes has direct influence on the bottom shear stress and the shear stress in the separation zone. Other results regarding this shape type groyne are:

• Increasing the length of the flange make velocity to decrease behind flanges.

• In the T-shape groynes, increasing the length of the flange, decreasing the reattachment length.

• Totally It can be said that: