Abstract: Acute Transverse myelitis during pregnancy is rare and is life-threatening for parturient women and their pregnancies. We report case of young Senegalese parturient woman. This is a patient old 20 years, 1 pregnancy, 1 parity, with a history of asthma and gestational hypertension, who presented motor deficit of 04 members with progressive installation on twenty days during a pregnancy to term (9 months) from where achieving a scheduled cesarean during labor that allowed the extraction of a girl with no abnormalities. Then the patient was sent to our neurology’s department of Fann Hospital in Dakar where she was hospitalized for suitable care. The diagnosis of acute transverse myelitis was retained on clinical evidence of a spinal interruption syndrome confirmed by paraclinical investigations. The spinal MRI showed extensive hyperintense signal from C4 to C6. An inflammatory syndrome with CRP at 108 mg and a high CSF protein at 2.07 g/l. The patient had received corticosteroids and physical rehabilitation followed by a favorable outcome. The tetraplegia during pregnancy should be investigated myelopathy as acute transverse myelitis. It is therefore necessary that these women have a multidisciplinary care between neurologists and gynecologists to cause showing a better prognosis.

Myelopathy occurrence during pregnancy is a rare phenomenon [8], with a prevalence of 0.4 to 1.5 per thousand [1, 3]. Acute inflammatory myelopathies, yet named acute myelitis (AM) are a nosological group relatively rare and heterogeneous in terms of etiology [4]. According to extension of lesion in axial plane, we distinguish transverse myelitis from partial myelitis [12]. We report acute transverse myelitis case in a young Senegalese woman pregnant.

This is a patient old 20 years, 1 pregnancy, 1 parity, with a history of asthma and gestational hypertension, who presented motor deficit of 04 members with progressive installation on twenty days during a pregnancy to term (9 months). Two days after symptoms had occurred a birthing labor following which a team of gynecologists of Mbour hospital indicated caesarean section. This latter was carried out successfully. Intervention by caesarean allowed to extract a female baby with no abnormalities.

Outcome at 8 months was marked by a recovery of the driving force at 4 to 5 on both upper limbs and at 3 to on legs with a resumption of walking using a walker. In addition, there was a total regression of vesicosphincteric disorders.

The diagnosis of acute myelitis is based on clinical criteria and may be inflammatory, infectious or paraneoplastic. The qualifier "acute" is added when onset is made on few hours. The term of "acute myelopathy" is acute damage of spinal cord, without prejudging the nature of injury. Acute myelopathy is defined by an installation mode whose nadir of symptoms is between 4 hours and 3 weeks [15]. This eliminates vascular and traumatic myelopathy classically characterized by acute onset in less than 3 hours and metabolic, degenerative and post-radiation causes more chronic installation [15]. The installation mode of symptomatology from our patient was progressive over 20 days. The term of "acute myelitis" him based solely on paraclinical elements for nothing clinically not let prejudge an inflammatory process. Elements for inflammatory myelitis’s origin are [12]:

Inflammation of cerebrospinal spinal fluid (CSF): lymphocytic pleocytosishigh index of IgG and / or oligoclonal profile to the isoelectrofocalization of IgGs; contrast enhancement of lesion in spinal cord MRI. In our patient there was high CSF protein associated with inflammatory biological syndrome in blood with CRP at 108 mg. Acute transverse myelitis (ATM) is clinically a complete a bilateral impairment, involving motor deficits, sensory and sphincter usually symmetrical with a sensory level [12]. Our patient had a motor and sensory deficit, bilateral, associated with anal incontinence. A series of French pregnant women victims of paraplegia due to spinal cord damage had found a prevalence of 47% of Caesarean section. And more than half were scheduled caesareans during labor [10]. Our patient also benefited from a Caesarean section during labor with extraction of a healthy girl. The spinal cord MRI is the key for positive diagnosis, differential and sometimes aetiologic of acute spinal cord lesion. It will allow in first step eliminate spinal compressively cause or tumor. It will then search presence of single or multiple intra-axial lesion, specify its cervical, thoracic or lumbar’s topography and its extent in axial plane (transverse myelitis or partial) and longitudinal plane (longitudinal extent myelitis or not) [10]. We performed a spinal cord MRI in our patient which showed Fig. 1 (intramedullary hyperintense signal from C4 to C6), Fig. 2 (central hyperintense signal in cross sectional). It was an MRI all cord to properly highlight subclinical lesions. Our patient also had a big left leg before being hospitalized in our service then objectified thrombosis in venous Doppler ultrasound of the left leg. It also seems necessary to emphasize prevention of thromboembolic risk (wearing support stockings, physical therapy heparin when bedrest) [14].

One patient of the French study, not having received prophylactic anticoagulationhad presented a proximal DVT [10]. Our patient had received anticoagulant therapy with curative dose. Complications during pregnancy are dominated by urinary tract infections, favored by systematic self catheterization, risk of thrombophlebitis and occurrence of bedsores [5, 11]. This was case for our patient who presented in more than episode of infection to Klebsiella pneumoniae, urinary infection to E. coli. Impaired respiratory and lung function, especially in case of high thoracic or cervical damage can be observed. This was not the case with our patient who showed no respiratory disorder. The diagnosis of acute transverse myelitis was retained in our patient in front of clinical presentation associated with radiological spinal cord lesions from C4 to C6 in MRI (Fig. 1), a biological inflammatory syndrome (high CSF protein at 2.07 g/L and CRP at 108 mg) and lack of other causes that could explain its pathology. The transverse feature was also evoked before image in cross sectional of the cord (Fig. 2) showing a intramedullary central lesion occupying more than half of the cord. Various etiologies of myopathies were found in patients in pregnancy as in the French cohort on 11 years, the etiologies of pregnant women were as follows: Inflammatory (13%), Traumatic (73%), infectious (7%); vascular (7%) [10]. 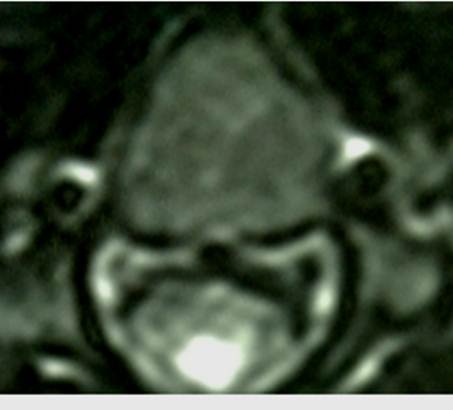 Management of acute myelitis episode is relatively consensual and based on the intravenous corticosteroid dose (1 g daily of methylprednisolone) for at least 3 days, and this, whatever the etiological diagnosis. On suspicion of infectious process, antibiotic coverage and / or antiviral will be proposed [12]. This was the case of our patient received with an infectious syndrome for which she received antibiotic therapy with ciprofloxacin. Ahead a severe inflammatory myelopathy table and no response to high-dose steroid therapy, fast relay by plasma exchange may be proposed [4, 6]. There is very few data about using polyvalent immunoglobulins as a treatment for outbreaks of myelitis [12].

The tetraplegia during pregnancy should be investigated myelopathy as acute transverse myelitis. Because the inflammatory myelopathy is the second cause of myelopathy in pregnant women. It is therefore necessary that these women have a multidisciplinary care between neurologists and gynecologists to cause showing a better prognosis.