Abstract: This study aims to evaluate the immediate post-operative results of this particular case report. Accidents at the workplace are frequent in Africa due to lack of adequate protective equipment. The traumatic injuries sustained can be potentially life-threatening. Impalement injuries related to these accidents are even more rarely encountered in surgical practice. We are reporting on a particular case of a 14-year old male patient who was admitted at the department of visceral surgery at the National Hospital of Donka, Conakry, Guinea, for emergency evaluation and treatment of a penetrating abdominal injury by impalement on a wooden bar that had occurred following a fall from a building at a construction site. The bar penetrated from the left flank and exited through the right flank, resulting in evisceration and incarceration of the small bowel. An emergency operation was performed to remove the foreign object and to reestablish anatomic continuity in the patient and resection of a 90cm-long necrotic segment of the terminal ileum.

Trauma is one of the leading causes of death in any age group. Abdominal trauma may be classified as non-penetrating or penetrating, but both mechanisms may either lead to superficial injuries or cause intra-abdominal injury [1]. The mechanism of penetration of abdomen is related to the degree of damage to the associated organs within the peritoneal cavity, and involving life-threatening injuries that can only be treated with emergent operative intervention. [2]. Selective nonoperative management, considered both safe and cost-effective, could also reduce the number of unnecessary laparotomies [3].

The initial management for penetrating abdominal injuries requires rapid assessments of extent of injury and emergency triage is order to identify the patients who need immediate surgical intervention. Patients who are not in need of urgent operative management may be treated conservatively with the help of aggressive resuscitation and careful observation during 24 hours for the development of any complications before being discharged [4].

Impalement is an uncommon and relatively challenging injury with potentially severe consequences.

The initial management of patients with impalement injuries follows the same basic principle as that for penetrating abdominal trauma and according to the guidelines created by the American College of Surgeon's Advanced Trauma Life Support. The most crucial aspects of primary survey include assessment of airway, followed by breathing, circulation (ABCs) and stabilization of hemodynamics by resuscitations with intravenous fluids [5].

It is therefore critical to ensure minimal manipulation of the transfixed object before and during transport to minimize blood loss through a tamponed effect. [6] In many cases, life-threatening hemorrhage had resulted from inappropriate management of impaled victims, whereby most succumb to their injuries before reaching the hospital.

Traumatic injuries that are associated with occupational accidents pose major health and safety issues, especially in Africa. Together with the lack of provision of safety equipment, and certain work careers with higher risk of exposure to injuries, these factors affect the overall safety of the workers on a daily basis. In this case report, a rare incident took place, which relates a fall from height onto a vertically placed wooden bar resulting in a transfixion injury (the wooden bar acts as a spear).

The aim of this study is to report on this particular and rare case and to evaluate the immediate postoperative result.

A 14-year old carpenter was admitted to the National hospital of Donka in Guinea Conakry (West Africa) after falling from a building at his workplace onto a vertical wooden bar. He sustained a penetrating injury to the abdomen by getting impaled upon the wooden bar. He was brought to the hospital about 1hour 15minutes after the incident had occurred due to the remote location of his workplace. During a rapid physical examination, the patient was found to be conscious and responsive. His pulse was about a 100 and respiratory rate at 22 breaths per minute with clear lung sounds. The patient complained of diffuse abdominal pain and vomited his stomach contents once. The shape of the abdomen was asymmetric and it contributed poorly to breathing efforts. The foreign object was protruding from his flanks (Figure 1), and his shirt, which was caught in it, was pulled into the abdomen cavity. The loops of small bowel that protruded at the exit of both wounds appeared to be intact and well perfused. The diameter of the entry wound on the right side was about 10cm in and the exit wound on the left about 15cm (Figure 2). The wooden bar measured about 4x4cm in thickness. No neurological deficits had been noted below the level of the injury and there were no other positive physical findings of organ injury that could be noted. A coagulation profile and blood count were rapidly obtained; indices were found to be within the normal range, signifying that no massive blood loss had been encountered.

Figure 1. Object entered from right flank and exited from the left flank. 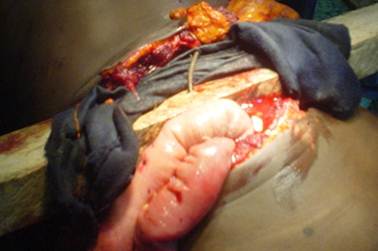 Figure 2. The wooden bar is shown after incising through the abdominal wall layers.

The patient was brought into the O. R and placed under general anesthesia. A transverse abdominal incision was performed by careful dissection of each layer until the foreign object could be completely isolated. The abdominal cavity was exposed and explored to assess the internal damage. The abdominal wall muscles were ruptured (transversalis, internal oblique, posterior rectus wall) due to the shearing force. A segment of the mesentery of the small bowel was sectioned 30cm away from the ileocecal flexure extending up to 25cm from the Ligament of Treitz. On further exploration, 90cm of the jejunum was found to be separated from its serosa. The degloved section needed resection as it could not be salvaged (due to ensuing necrosis). The team proceeded to a resection of a 45cm portion of devascularized ileum followed by an end-to-end anastomosis. Then, the second portion of the mesentery was resected over a length of 120cm and continuity was restored with an end-to-end ileojejunal anastomosis. Peritoneal cavity was generously lavaged with warm normal saline solution and was further explored for any occult organ injury before closure. Hemostasis was carefully maintained throughout the procedure to minimize blood loss and the abdominal wall was sutured in a layer-wise fashion, except for the skin layer, which was allowed to close by secondary intention due to heavy bacterial contamination. 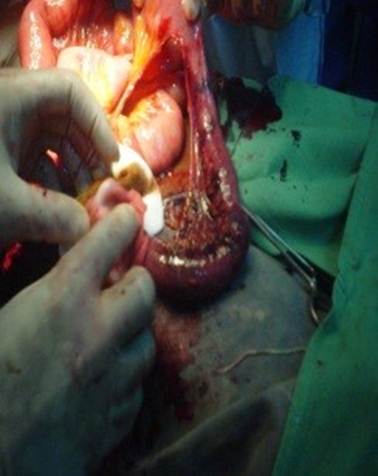 Figure 3. Shows necrosis of the ileum. 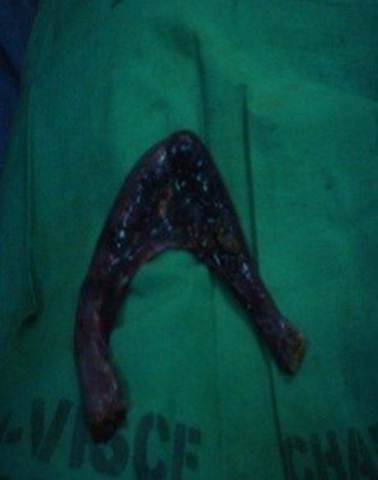 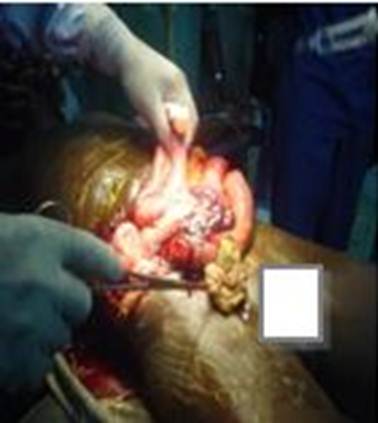 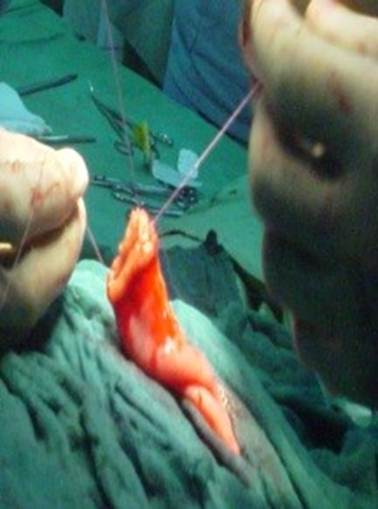 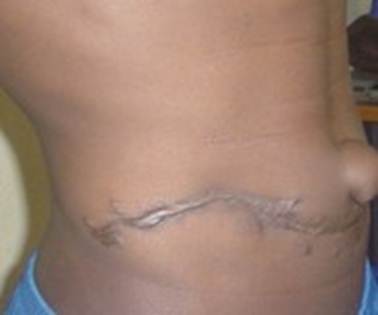 Figure 7. Side view of the wood scar. 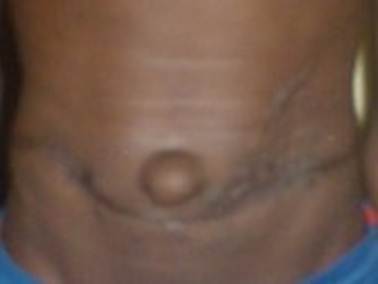 Figures 7 and 8 (side and Front views of the wound scar) at a follow-up visit 3 months later.

The abdomen is the third most commonly involved part of the body in trauma. Injuries. In most cases of eviscerations following penetrating trauma, laparotomy is needed. A majority of evisceration cases are secondary to stab injuries. [7] Following trauma to the abdomen, it is crucial to detect signs of small bowel injury at early stages in order to minimize the chances of morbidity and mortality [7]. The mechanism of impalement injuries involves contact of the human body with an object at rest upon impact especially during collisions or fall accidents. [8] The offending object must be left in-situ during transportation to the hospital, otherwise, death may ensue from massive hemorrhage [9].

The object must then be carefully removed under direct vision in the operating room and any bleeding must be rapidly controlled [10].

Any attempt to reinsert the eviscerated bowel back into the abdomen should be avoided. Experts suggest that resuscitation in the emergency department is best followed by antibiotic prophylaxis prior to entering the operating room [11].

In the presence of suspected head and spine injury, physical examination of the abdomen might not be adequately performed to assess for visceral injury. [12] It indeed requires a wide range of skills for the surgeon who has to deal with traumatic injury as diagnosis may not always be evident, especially in occult injuries. The diagnosis of bowel and mesentery injury involves careful assessment of the extent of tissue damage and viability. Estimation of microcirculation by observation of color of serosa might not be preferred method, especially in non-experienced surgeons. The most commonly used methods, as suggested by authors, which have proven to be reliable in the operating room are Laser Doppler flowmetry (LDS) or Visible light spectroscopy (VLS) In the event of an isolated mesenteric injury, the bowel must be assessed for viability. [13] It is critical to identify vascular compromise in the event of mesenteric injury without bowel involvement. In the presence of vascular compromise, the devitalized bowel must be resected and intestinal continuity must be reestablished with anastomotic sutures. Otherwise, if the adjacent bowel is found to be viable, the mesentery tear must be closed with sutures and not ligated, as it could potentially herniate [14,15].

The treatment of this injury followed the basic guidelines of primary trauma management and the object was not removed until the patient was placed on the operating table. The incision line was made along the trajectory of the object across the abdomen to be able to rapidly extricate it from the body. The patient was given antibiotics treatment, by perioperative lavage and postoperatively due to the contamination of the wound by the wooden object. Wound debridement was performed to ensure formation of healthy granulation tissue. He was discharged on day 21 with consecutive follow-up visits. The post-surgical evaluation of unfavorable outcomes was performed during his stay in the hospital using the American College of Surgeons National Surgical Quality Improvement Program (ACS NSQIP) [16].

According to the ACS NSQIP risk assessment evaluation, the patient’s post-surgical condition would be concluded to be satisfactory if complications, such as reoperation, pneumonia, cardiac complications, surgical site infection, urinary tract infection, venous thromboembolism, organ space infection, renal failure, need to return to the operating room, or a need to visit the rehabilitation facility could be excluded. The patient of interest, with the exception of surgical site infection, had an uneventful recovery without any of these aforementioned complications. His wound scar was well-developed with contraction of the tissue.

Work accidents are recurrent sightings in Africa, and currently remain as serious threats to human health. Impalement injuries are generally uncommon and undeniably challenging to manage, often necessitating a multidisciplinary teamwork. In penetrating abdominal injuries as in this case, life-threatening haemorrhage is of major concern and demands emergency resuscitation before proceeding to extraction of the insulting agent. When faced with high grade injuries, prompt evaluation, stabilization, exclusion of other injuries and individualized surgical approach are the critical steps required to ensure a successful outcome.

The authors declare that there is no conflict of interest with any financial organization or corporation or individual that can inappropriately influence this work.

We would like to thank the professor Biro Diallo, Doctor Oumar Taibata Balde, Doctor Abdoulaye Korse Balde, Professor Ahmed Boubacar Barry, Dr Amadou Dioulde Diallo, for their work ethics and professionalism while undertaking this case report at the gastrointestinal surgical department of the National Hospital in Donka, Conakry Guinea.