Abstract: Lead is one of the environmental pollutants that can effect on the life of living animates in several ways; it has a long half-life and is collected in the soft tissue and conduct to adverse effects in tissues. The present study was performed to investigate the histological effects caused by lead in the rat liver. The study was conducted on 20 rat, the animals were divided into 2 equal groups. The first group received distilled water and considered as a control group. The second groups were orally administered lead acetate 8.5 mg/l of body weight for 20 weeks. The rats were anesthetized, the liver were removed for histological studies. Histological changes which observed in the liver were vacuolation, fatty degeneration, congestion within central veins, hemorrhage and infiltration of inflammatory cells. In this study, harmful toxic effects observed in liver of rats.

For years, lead had been a toxic problem for human and animals [1] and the most useful and complete model for toxicological studies is the toxicity of lead [2-4]. In spite of its detected hazards, this element used widely at industrial and commercial applications as in paints, plumbing, manufacture of lead acid batteries and etc. [5,6]. Gastrointestinal and respiratory systems are more exposed to lead and therefore create acute and chronic situations [7]. When foods are put into improperly glazed pottery or ceramic dishes, lead can enter foods. Lead also can leach into drinking water in water distribution systems of individual house [8,9]. Soft tissues and bone are place that the ingested and absorbed lead was stored and the highest lead concentration occurs within the teeth, bone, lung, liver brain, kidney and spleen [10].

Twenty adult male rats (Rattusnorvegicusalbinus) that were 1.5 months old, weighing 210±35 g, were used in this study. The animals were maintained in individual cages at the room with a 12-h light and 12 dark cycles and limited temperature of 20±1°C, and were permitted access to water and standard laboratory pellets ad libitum. The assay protocol for this research was approved by the University Research Committee.

Rats were randomly divided into two groups, A and B; n=10 each group. The animals in group A served as the control group and received the distinct dosage of distilled water. The group B received 8.5 mg/l by oral gavage of the lead acetate (fulda-Germany). Experiment design was followed for 20 consecutive days in all groups.

Portions of the lobes of the liver from each rat were cut rapidly, fixed in neutral buffered formalin (10%), were then dehydrated, with grades of ethanol (70%, 80%, 90%, 95% and 100%). Cleared in xylene and embedded in paraffin wax, then 4-5 μm thick sections were obtained by rotary microtome and stained with Harris hematoxylin and Eosin (Luna, 1968).

The lobular engineering into the liver of lead-administered rats was kept intact in all treated rats after 20 consecutive days of 8.5 mg/l the lead acetate administration. In comparison with the control group, in some hepatocytes was seen vacuolation, fatty degeneration in other hepatocytes, congestion within central veins and some sinusoids. Infiltration of inflammatory cells was observed in the interstitial tissue in addition to the congestion of the central veins (fig 1). 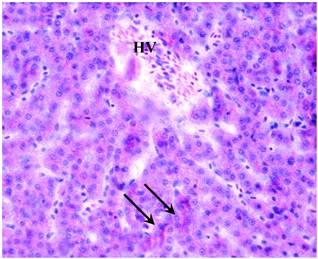 In control group was showed normal lobular architecture and histology. In control group; the central vein, the initial branch of hepatic vein, was occupying the longitudinal axis of each classical lobule. Hepatocytes radiated from the central vein fenestrated plates of liver cells, separated from each other by large vascular spaces known as hepatic sinusoids.

Lead element is one of the most common toxic metals and the most common route of exposure is by ingestion of lead contaminated food [11]. Once it is absorbed from gastrointestinal tract, lead bounds to erythrocytes and widely distributed initially to soft tissues such as liver, kidney, brain and spleen [5], for this reason we select the liver and kidney to describe the histological changes after lead exposure. The liver via the portal vein is the first organ exposed to enternallyabsorbed nutrients and other xenobiotics. The liver is composed of highly active metabolic tissue containing huge complement of detoxification machinery system [12].

The most common findings in liver were vacuolation, fatty degenerative, congestion within central veins and a losing normal architecture into the hepatocytes. These findings were in agreement with other researchers [11,13,14], these changes may be because of that lead acetate was exhibited to decline cytochrome P450 content [12]. Also lead induces mitogenic response in the rodent liver [15]. Lead acetate was found to induce glutathione-S-transferase in rat liver [16].

Histopathological investigations of liver display changes which reflect damages in hepatic tissues possibly due to cycling of heavy metal and also observed the same bistologicaJ changes in liver in rat after exposure to heavy metals. It has been prsented that heavy metals forms rnercaptides with the SH groups of cysteine and less stable complexes with other amino acide chain and these changes reflect damages in hepatic tissues [17].