Sheep production plays a crucial role in Ethiopia, majorly serving as a family food (meat) and income source from sale of live sheep. There exist 29.33 million sheep population in Ethiopia [5] that entirely raised under traditional production system- characterized by low input-output. The productivity of sheep is very low as explained by annual off-take rate of 33% and average carcass weight of 10 kg/head [7]. The productivity is hindered by feed deficit (inadequate amount and quality), low genetic potential of sheep and prevalence of disease and parasites. Sheep are raised entirely on grazing pasture and rarely supplemented with concentrates. Feed deficit is aggravated with dry season and drought occurrence, when dry roughages remain major available feed and protein is the most limiting macronutrient. Most sheep are sold to local markets at around yearling age (live weight below 20 kg) often without supplementation (body conditioning) before marketing. However, some farmers traditionally fatten their sheep before marketing, with little concentrate supplementation on top of grazing.However, there is uncertainty that the supplementation could support the nutrient requirement for maximum growth of sheep. Moreover, this system of feeding would sometimes lead to over or under utilization of available feed nutrient that may lead to its wastage and uneconomic feeding.

Feeding sheep based on their nutrient requirement at different production phases is not common practice in Ethiopia. On the other hand, most of the developed feeding standards initially based temperate wool breed sheep [17] and some tropical sheep breeds [12, 19] have been used in improved sheep production systems. According to Andrew and Orskov [3], the maximum live weight gain and nitrogen retention of temperate breed lambs on high plane of nutrition, growing from 15 to 40 kg were achieved at 17% dietary CP. In addition, National Research Council (NRC) [17] recommended a diet containing 14.5% CP for maximum growth of early weaned lambs. Unlike that for temperate breeds, Kearl [12] and Paul et al [19] recommended a lower levels of dietary CP and energy for growing tropical sheep at different growth rates and live weights.

Although nutrient requirement tables developed for tropical sheep are believed to meet the requirements of indigenous sheep breeds of Ethiopia, it has been rarely accepted and applied, as the recommendations based estimates obtained from a specific breed, which may not necessarily represent local sheep. Also, differences in the quality of feed and utilization efficiency by animal may contribute to this uncertainty. The differences in nutrient requirement of animals lie on breed, age, physiological status, growth potential, feed quality and environmental factors, such as temperature, air humidity, solar radiation and wind speed [17]. However, there is no/little information on nutrient requirements specific to indigenous sheep breeds of Ethiopia. Therefore, this study was aimed to determine the optimum dietary crude protein for maximum growth and feed utilization of yearling Arsi-Bale lambs in feedlot.

ME =Metaboliszable energy; calculated according to Kearl [11]. * % DM of concentrate mix. Ratio of straw to concentrate offered was 65: 35, on as fed basis.

The diets were similar in composition, with the exception of noug seed cake and wheat middling (diet1) and wheat middling (diet4) exclusion for the purpose of balancing (Table 1). Maize grain, wheat bran, noug seed cake, wheat middling, salt and limestone constituted concentrate part that contained 14, 16, 18, 20 and 22% CP in the respective treatments, leading to differences in dietary CP (9.43% CP in T1, 10.26% CP in T2, 11.06% CP in T3; 12.06 % CP in T4 and 13.1% CP in T5). The diets were formulated to be nearly iso-caloric (2.12 Mcal ME/Kg DM) and meet the energy requirement for growing tropical sheep [12]. The diet containing 9.4% CP was used as negative control, while 13% CP diet was positive control. All diets were similar in DM content, but differed in NDF, ADF and ADL.

Thirty-two yearling male Arsi-Bale sheep with mean initial live weight of 17.53 .57 kg were purchased from local markets and treated against endo-and ecto-parasites and vaccinated for common viral diseases. All animals were individually penned in a house with concrete floor and adapted to indoor feeding management for two weeks, before commencing the experiment. Then, they were randomly assigned to five dietary treatments in completely randomised design.

Feed was provided twice daily at 8:30 a.m and 2:00 p.m ensuring 15% refusal for each animal. The amount of straw and concentrate offered were adjusted daily based on previous day intake, where straw to concentrate ratio was 65:35, on as fed basis. Water was provided in a bucket free of choice. Feed offered and refusals were measured daily and feed intake was calculated as the difference between the two measurements. Representative feed samples were taken daily and sub-sampled every 15 days. All animals were weighed biweekly after overnight (~16 hours) deprivation of feeds and water.

At the end of the feeding period (87 days), three lambs were selected per treatment and transferred to metabolic crate with slotted floor, individually. The animals were adapted to the attached fecal bags and urine funnels for three days followed by collection of fecal and urine for seven days. All animals were with unlimited access to water. Urine was directly poured into a glass bottle containing drops of sulfuric acid to prevent ammonia loss. The amount of feces and urine produced per animal/day was measured and recorded. About 10% of the daily fecal and urine outputs were sampled per animal and stored in a deep freezer (-20癈) until sub-sampled for laboratory analysis. Moreover, three animals were randomly selected per treatment and slaughtered for carcass analysis. The animals were slaughtered after 24 hour of feed deprivation. Measurements were taken for slaughter weight, hot carcass weight (HCW) and carcass components (bone, fat and lean, trimmings). Dressing percentage (DP) was calculated as: (HCW/SW)*100.

The effect of treatments was not significant on dry matter intake (P>0.05), ranging from 918.3(T1) to 928.1 g/day per lamb (T3). The magnitude of DM intake observed in the present study is comparable with previous studies for Arsi-Bale lambs maintained on roughage and concentrate [6, 8], but higher than that reported for Afar and Black head Ogaden lambs [9]. Studies have shown that a non-significant feed intake with sheep fed diets containing 9% to 13% CP [2], in Saanen kids fed 14% to16% CP diets [15] and Korean black goats consumed 14-20% CP diet [11]. In the present study, intake of crude protein linearly increased (P<0.001) with increase in dietary CP, where lambs on 13% CP diet consumed 120g CP/day. Also, intake of fiber fractions increased with increase in dietary CP, the highest value obtained with 12% CP diet. Although change in the apparent digestibility of nutrients was non-linear with change in dietary CP, there was variation in digestibility of DM (P<0.05), CP (P<0.05), NDF (P<0.001) and ADF (P<0.001). The apparent digestibility of nutrients was greater with T2 and T4 diets, and lowest with T3 diet. 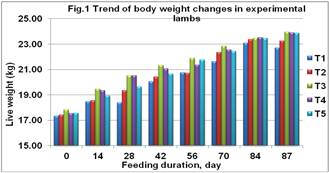 Although non-significant (P>0.05), an improve in the average final live weight (22.71 vs. 23.96 kg), total gain (5.37 vs 6.35kg) and average daily gain (61.78 vs 73.00 g/day) were observed with increase in dietary CP. The observed changes in growth performance with higher CP diet probably resulted from increase in feed intake. In agreement with the present results, Paul et al [19] recommended 9.7%CP to 12.1% CP) diet for tropical sheep, growing from 15 kg to 25 kg. However, improved growth performances were reported at higher (16 to 18%) than lower (10-14%) dietary crude protein for Awassi lambs [10, 21] and Kivircik lambs [13]. Similarly, Hwangbo et al [11] reported the highest gain for growing Korean black goats at higher (18%CP) than lower level of dietary CP. The present study has also shown that changes in live weights of lambs were incremental throughout feeding period (Fig 1). There was differences in FCR (P<0.001): the highest FCR were observed in lambs fed 12% CP diet (12.61 DMI/g gain) and 13% CP diet (12.76 g DMI/g gain),while the lowest value (14.9) was in lambs fed 9.4% CP diet, suggesting a higher nutrient availability at given feed protein and energy contents. Previous studies by Abebe et al [1] and Ermias [6] have indicated an improve in feed utilization and growth performances of Arsi-Bale lambs at higher than lower level of protein source concentrates.

Nitrogen intake (NI), urinary nitrogen(UN) and total nitrogen excretion (TN) increased (P<0.001) with increase in dietary CP (Table 4). The highest NI(21.08), UN(5.02), and TN excretion (9.19 g/day) were observed in 13% CP diet. Treatments did not vary (P>0.05) in the level of fecal nitrogen excretion. An increase (P<0.001) in nitrogen balance (NB) was seen with increased dietary CP, being the highest (12.70 g/day) in12% CP diet. Osuagwuh and Akinsoyinu [18] reported an increase in NI, UN, FN and N retention for West African dwarf goats, as the level of crude protein in the supplement increased from 5% to 25% DM. However, there was no significant difference (P>0.05) in nitrogen balance between lambs fed 12% and 13% CP diets. The result shows that the higher nitrogen balance, the better the growth performances of lambs.

Based on the results of this experiment, the optimum dietary CP for improved performance and feed utilization of yearling Arsi-Bale lambs, growing from 17 to 25 kg, is about 12%,which synchronizes with 2.11 Mj/kg DM feed energy. However, detail studies using 揷omparative slaughter techniques", is suggested to support the present findings. Moreover, applying the same work for other indigenous sheep breeds is equally important.