Abstract: Ehrlichia ewingii, Anaplasma phogocytophilum and hemotropic Mycoplasma spp. are three bacteria which can infect different dog’s blood cells. All of these three pathogens can be transmitted by different ticks and some reservoir hosts also play a role in their transmission. Although E. ewingii and A. phagocytophilum infect granulocytes and neutrophils of their hosts, respectively, hemotropic Mycoplasma spp. can infect reticulocytes. In this research, the previously taken dogs’ blood films were collected randomly from different veterinary hospitals of Tehran, the capital of Iran. The blood films were reinvestigated for arthropod-borne diseases. Surprisingly, E. ewingii/A. phagocytophilum morulae and hemotropic Mycoplasma spp. were observed in 18% and 37.7% of samples, respectively. None of these pathogens have been reported in Iran. In addition to the new report, the changes which have been made by these pathogens, their similarities, differences and zoonotic importance are discussed.

Ehrlichiosis is caused by several bacterial species in the genus Ehrlichia, pronounced (err-lick-ee-uh) [1], family Anaplasmataceae, order Rickettsiales. They are small, pleomorphic Gram-negative bacteria found in circulating leukocyte or platelets of susceptible mammalian hosts. Ehrlichia spp. are tick-borne, obligatory intracellular pathogens. These organisms are often observed in compact colonies or phagosomal inclusions which are named morula [2]. Canine ehrlichiosis is caused by Ehrlichia canis. This disease is distributed worldwide and its primary vectors are brown dog tick (Rhipicephalus sanguineus) and Dermacentor variabilis. This species of Ehrlichia commonly infect mononuclear white blood cells [1]. In addition to E. canis, E. chafeensis, the agent of human monocytic monocytotropic ehrlichiosis (HME) can infect dogs’ mononuclear leukocytes. E. ewingii causes canine granulocytic ehrlichiosis, this disease is reported in the US and its potential vector is Amblyomma americanum. Granulocytes are the most infected cells [1]. Anaplasma phagocytophilum is another tick-borne pathogen of family Anaplasmataceae which can be transmitted by different species of Ixodes [3]. A. phagocytophilum infection was first described in Human. It also can infect horses, ruminants, dogs and cats. Macaques and baboons were infected experimentally [4]. Small mammals can be reservoir of A. phagocytophilum [3].

Diagnosis of E. ewingii is usually based on tick infestation history, observation of its morula in granulocytes, hematological abnormalities and serological findings. Polymerase chain reaction (PCR) is now available [3].

A. phagocytophilum is often pleomorphic organisms are varying in size from 0.2 to 2 µm in diameter. A.phagocytophilum inclusions are morphologically similar to E.ewingii morula. More diagnostic techniques are needed for their differential diagnosis [3].

Mycoplsma spp. are easily recognized in stained blood films, M. haemocanis are usually occur singly with one to four cocci per red blood cell or in doublets, but ring forms and chains have not been described [7], but these bacteria should be differentiated from Basophilic stipplings and Howell-Jolly bodies [3].

Most symptoms of Ehrlichiosis among dogs were described in E.canis infection. This disease is divided into acute, subclinical and chronic forms; clinical disease in E.ewingii infection is acute rather than chronic [3]. Common clinical signs are fever, depression, anorexia, weight loss, stiffness, joint swelling [8-11], lethargy and CNS signs such as head tilt, tremors and anisocoria [10,12]. Rarely observed signs include hemorrhage, weight loss, uveitis, pruritis, vomiting, diarrhea and organomegaly [10-13]. The most important laboratory changes can be observed as mild nonregenerative anemia and thrombocytopenia [9,12,14].

In Canine hemotropic mycoplasmosis, clinical evidences do not develop. It can cause mild to severe regenerative anemia [7]. The severe symptoms are mostly seen in splenectomized dogs, PCR detection is also available [3].

All of these three organisms can potentially be transmitted to human [24,25],but their zoonotic importance will be discussed later.

61 blood films were randomly collected from dogs (33 bitches, 28 studs) which were referred to different veterinary hospitals of Tehran, the capital of Iran. Dogs’ age and breed were recorded in a few cases. Previously taken blood films were observed again for hemotropic arthropod-borne pathogens. The observed abnormalities were recorded and compared with previous diagnosis. The newly recorded diseases were analyzed among studs and bitches by chi-square test, SPSS software. The breeds and ages were not analyzed because they had not mostly been recorded in the case histories.

In Diff Quick of group A, in 11 samples mature neutrophils were decreased but band cells increased, the other leukocytes were normal in counting. 2 cases were leukopenic. In 2 cases lymphocytosis was observed in addition to mature neutropenia and band cell increasing. In band cell increasing samples, the band cells of 3 samples was 20%-30%, 9 samples were 10-20% and 1 sample 5-10%. There were toxic changes in addition to left shift in neutrophils. Polychromatophilic macrocytes, hypochromic reticulocytes and anisocytosis were also observed in all samples (Figures 1, 3).

In group AB: in Diff Quick, 5 samples were leukopenic, 3 cases had mature neutropenia and band cell increasing (1 sample 30-40% and the rest 2 cases 10-20% of the counted leukocytes were band cells). In 1 case in addition to mature neutropenia and band cell increasing, Lymphopenia, monocytosis and reactive lymphocytosis could be observed. Reticulocyte changes include: hypochromasia, anisocytosis and poikilocytosis.

In all leukopenic samples, only neutrophils could be counted in low numbers. 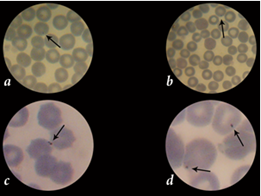 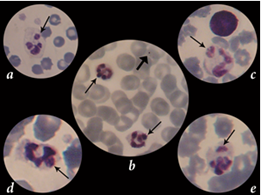 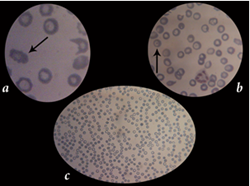 According to the research, the most important problem among the samples was history taking. Most of them were incomplete. The age and breed of dogs were rarely recorded. In spite of finding some tick-borne diseases, tick infestation history was recorded in only 6 samples. None of these observed abnormalities in the blood films were recorded as a "diagnosed disease" and most of the referred dogs diseases had been diagnosed as viral infections. The concurrent viral infections cannot be rejected but these tick-borne infections (E. ewingii/A. phagocitophilum and hemotropic Mycoplasma spp.) may make the infected dogs susceptible to other infectious diseases such as distemper.

Therefore, it can be concluded that blood films were not used for diagnosis and just taken as a routine procedure from referred dogs.

Canine hemotropic mycoplasmosis was reported in Europe, especially in its Mediterranean countries [42]. In France 3.3% of examined blood samples were infected with M. haemocanis and 9.6% with Candidatus M. haematoparvum [43] and high prevalence of this disease was reported among dogs in Africa [44].

None of these diseases has been reported in Iran, so; the importance of our findings is to prove that E. ewingii/A. phagocytophilum and hemotropic Mycoplasma spp. infections are present among dogs in Iran, therefore; further researches are needed to understand the true prevalence, the importance, species diagnosis and the potential vectors of these diseases. Seroprevalnece of E. canis has been reported among dogs in different parts of Iran [45-47]. There is a cross-reactivity between E. ewingii and E. canis in some serological methods [3]. Therefore some of the reported seropositive samples might be related to E. ewingii exposure, but there is not any cross-reactivity between E. ewingii and A. phagocytophilum [3] and serological tests can well differentiate these infections from each other. In this case, because of retrospective study, the access to referred dogs sera was impossible. In this reserach 23 samples (37.7%) (25.5-50%; 95% confidence interval "CI") were positive in Mycoplasma spp. and 11 samples (18%) (8.4-27.6%; 95% CI) were positive in E. ewingii/A. phagocytophilum which are relatively high. One of the results of the disease unidentification is, no treatment of infected dog will occur and consequently high prevalence of the infection among more ticks and more dogs will be observed.

Amblyomma americanum is the main vector of E. ewingii and white-tail deer (Odocoileus virginianus) serve as a reservoir for E. ewingii in the southern parts of the U.S [48-50]. E. ewingii DNA was detected in D. variabilis and Rh. sanguineus [14,51,54]. These species and may be some other ticks are more important in other countries such as Brazil and Cameroon where E. ewingii has been detected [26,27]. Once ticks are infected by E. ewingii, they remain infected throughout their life (transstadial transmission) [14,55]. A.phagocytophilum can be transmitted by members of the Ixodes persulcatus complex (e.g., I. scapularis, I. pacificus, I. ricinus and I. persulcatus) [3,56]. A minimum required feeding time for Ixodes spp. which can transmit A. phagocytophilum to susceptible mammalian hosts is 24 to 48 hours [57-59]. A. phagocytophilum is able to reside in the salivary glands of unfed Ixodes spp. ticks [60]. R. sanguineus serves as a vector and reservoir of M. haemocanis because of transstadial and transovarial transmission of the organism [3]. Unfourtunately, there is no information of vectors and reservoirs of above pathogens in Iran. A. americanum has not been reported in Iran thus, the E. ewingii vectors can be the other tick genera. It is also predicted that because of the mean temperature increase in Iran, ticks can be active in more months of the year and thus tick-borne diseases will increase. Therefore, tick control is necessary for pets and farm animals.

Observable changes in blood films were recorded in dogs infected with E. ewingii, A. phagocytophilum and M. haemocanis and listed as below; in E. ewingii infection, the most important abnormality is thrombocytopenia but platelet counts are not helpful for diagnosis [9,10,12,14]. Mild anemia and reactive lymphocytosis are observed [10,11]. Biochemical abnormalities are mild and nonspecific in this disease [3]. Neutrophilic inflammation causes polyarthritis [10]. E.ewingii morulae can also be detected in CSF fluid, joint fluid, prostatic fluid or other body fluids [9,10,12]. Another problem which is caused by E. ewingii is the delay in neutrophil apoptosis. In normal cases neutrophils are in peripheral circulation for only 6 to 8 hours [61], but in some naturally and experimentally infected dogs this time prolonged to 5 days [62]. This phenomenonprovides additional time for the pathogen replication [63,64]. In this study, in leukopenic cases, just low numbers of neutrophils could be counted. Some of these neutrophils were in abnormal shapes; these neutrophils can be named "old neutrophils". In canine granulocytic anaplasmosis, mild to moderated nonregenerative anemia and thrombocytopenia are observed [15,16,23]. In Diff Quick, both neutrophilia and neutropenia can be recorded, lymphopenia, monocytosis, eosinopenia are also observed. Monocytopenia was reported in some dogs in the US [65,66]. In hemotropic mycoplasmosis the anemia is regenerative so hematological findings include: reticulocytosis, polychromasia, anisocytosis and presence of Howell-Jolly bodies.

Macrocytosis takes more time to develop [3]. In this case, polychromatophic macrocytes were observed, so this is another reason for chronic forms of these diseases in Iran because of the unidentification.

Neutrophilia, monocytosis and lymphopenia can occur in a response to endogenous or exogenous glucocorticoids in dogs like other animals [67-70]. Potential causes of increased endogenous releasing of glucocorticoids include fever, pain, stress, intense exercise and hyperadrenocorticism [69,71]. Left shift is often associated with inflammatory conditions. Bacterial infections, among other infectious diseases are more important for left shift occurrence [72,73]. Glucocorticoids increase lymphocyte sequestration and apoptosis [74-76], some secreted cytokines in bacterial and viral infections also cause lymphopenia [77-79]. Reactive lymphocytes are antigen stimulated lymphocytes which their size and their cytoplasmic basophilia were increased [73]. In this case all of the above abnormalities were observed and mentioned in details in the result section but leukopenia might occur due to chronic E. ewingii/A. phagocytophilum or other concurrent dignosed diseases like distemper or parvovirus infection! It is also unclear if E.ewingii/A. phagocytophilum and hemotropic Mycoplasma spp. infections can make dogs susceptible to other infections.This question and other ambiguous aspects of these tick-borne diseases must be answered by further reseaches.

The mortality has not been reported in order to E. ewingii or A. phagocytophilum infection among dogs, thus these diseases are mild or in apparent. E. ewingii infection may clear spontaneously within weeks or several months [84]. Two deaths of puppies were reported due to hemotropic mycoplasmosis [3]. M. haemocanis could be successfully transmitted congenitally and orally [3,85] in experimental studies. M. haemocanis can cause severe life-threating anemia in splenectomized dogs [3]. According to the results, these diseases have not been diagnosed in Iran, so their mortality rate cannot be estimated.

E. ewingii can be treated rapidly by suitable antimicrobial therapy. Doxycycline is a choice drug but other tetracycline can also be used [95]. Supportive treatment is necessary in polyarthritis cases [3]. A. phagocytophilum responds to doxycycline, rifampin and levofloxacin. Other tetracycline derivatives are also useful [96]. Canine hemotropic mycoplasmosis is never treated completely and after treatment latent infection is still in infected dogs. This disease can be limited by orally administered tetracyclines. Blood transfusion is necessary when the anemia is severe [3].

Special thanks to Dr. Fathipour for his help and there is no competing of financial interests exists.