Investigation of Rotavirus Infection in Calves with Diarrhea in Northeast Turkey

Abstract: Rotavirus is the most common cause of severe diarrhea in newborn calves. In this study, it was aimed to investigate frequency of Rotavirus infections in calves in Kars region in Northeast Turkey by feces sampling 112 diarrheic calves of 0-6 months old. Feces samples were tested for Rotavirus antigen by Enzyme Linked Immunosorbent Assay (ELISA). Of the 112 feces samples examined by ELISA 10 samples were identified as positive (8.92%). At the molecular stage, reverse transcription polymerase chain reaction (RT-PCR) technique was used to determine the presence of Rotavirus nucleic acid by using specific generic primers for VP6 genetic regions in feces samples. The 10 samples that were rotavirus antigen positive by ELISA were also positive on RT-PCR technique. The proportion of positivity in feces samples suggested that rotavirus infections are common in the Kars region in Northeast Turkey.

Factors that cause diarrhea include viruses, bacteria, protozoa, poor hygiene, lack of colostrum consumption and insufficient diet. These factors can cause diarrhea together or by themselves. One of the main viral factors that cause diarrhea in calves is rotaviruses. Rotaviruses are the important etiological agents of acute viral gastroenteritis in young ones of many species of animals and human. Rotavirus infections cause major economic losses in neonates of many domestic animals [23]. Rotaviruses are classified in the genus Rotavirus of the subfamily Sedoreovirinae in the family Reoviridae are characterized by segmented genomes comprising of 11 segments of double stranded RNA contained within a triple layered protein shell composed of a core, inner capsid and outer capsid. Three structural proteins, VP1, VP2 and VP3, form the core of the rotavirus particle. The group specificity of the virus is determined by epitopes on the VP6 protein and based on it; rotaviruses can be divided into seven distinct groups (A - G) [10,15,19,25].

Electron microscopy, latex agglutination, polyacrylamide gel electrophoresis and antigen ELISA techniques are used to diagnosed the Rotavirus infections [4,5,6,12]. When there is a need to examine a large number of samples, latex agglutination and ELISA is a rapid and inexpensive solution. The specificity and sensitivity of these tests is over 90%. The reverse transcription polymerase chain reaction (RT-PCR) is also employed using generic or type-specific primers prepared for various types of viruses [2,13,16,24].

The goal of this study was to obtain information about the presence, viroprevalence of rotavirus infections, which have not been previously reported in calves raised in the region of Kars, Northeast Turkey. The data that was obtained showed that the proportion of positivity in feces samples suggested that rotavirus infections are common in the Kars region in Northeast Turkey.

A commercial ELISA kit (Rotavirus Elisa Kit Cat.Nr.Bio K 067, Jemelle-Belgium) detecting rotavirus antigen in feces samples was used in the study according to the manufacturer’s instructions. After incubation at room temperature (20 to 25°C) for 10 minutes, the process was finished by adding 50 µl stop solution (1M phosphoric acid) to all wells. Optical densities were measured with an ELISA reader at 450 nm absorbance, according to the instructions in the test procedure. Samples giving values equal to or greater than 0.150 were accepted as positives and values less than 0.150 as negatives. 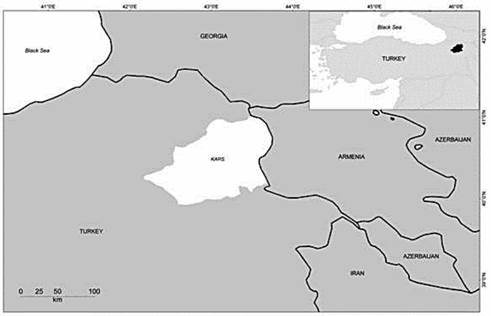 Fig. 1. Geographical positioning of the Kars region in which the study was performed.

From fecal samples, viral RNA was extracted using a Viral Nucleic Acid Extraction Kit (Vivantis, Malaysia), according to the manufacturer’s recommendation. The follow-up cDNA synthesis was carried out using a first strand cDNA synthesis Kit (Fermentas, Lituhania) as described by the manufacturer’s protocol, using random primers. The reaction mixture was incubated first at 25°C for 10 mins, followed by a second incubation at 42°C for an hour and then 70°C for 10 min, for inactivation on Moloney murine leukaemia virus reverse transcriptase (MMLV-RT). Amplification of cDNAs by PCR was performed using the primer pairs VP6. The primer VP6-F (5´- GAC GGV GCR ACT ACA TGG T -3´) and primer VP6-R (5´- GTC CAA TTC ATN CCT GGT GG -3´) primers flank a 379 bp DNA fragment for rotavirus [22]. PCR was carried out in a total volume 50 μL containing 5 μL of cDNA to the master mix, 4.5 μL of 10 X reaction buffer (100 mM Tris-HCl pH 8.3 and 500 mM KCl), 2 μL of 50 mM MgCl2, 20 pmole from of each of the primers, 1 μL of 10 mM dNTP mix, and 0.2 μL of 5 IU Taq DNA polymerase (MBI, Fermentas, Lithuania), 35.3 μL of RNAse free distiled water. The PCR was initiated by a single denaturation step at 94°C for 2 min, followed by 35 cycles of 1 min at 94°C, annealing at 55°C for 1 min. The mixture was then incubated, as a single step, for 1 min at 72°C and 7 min at 72°C for final extension. Ten microlitres of each PCR product were analyzed on 1% agarose (Prona, Spain) gel containing ethidium bromide (Sigma, USA).

Table 1. Distributions antigen positive samples with ELISA and RT-PCR according to age.

Rotavirus is the major cause of acute gastroenteritis in newborn calves. Rotavirus infection is non-viremic, have very short incubation period, and manifests profuse diarrhea and severe dehydration in neonates [13]. Rotavirus causes significant economic losses for cattle farms due to death or weight loss in infected animals, the cost of veterinary services and other reasons.

Numerous studies [7,9,11,17,18,20,21,27,30,31,32] conducted with regard to the rotavirus infection in Turkey and around the world have demonstrated that the infection is widespread in populations of cattle. These studies have reported that incidence of rotavirus infection varies between 10–62.5% in cattle. This study is the first one to determine the viroprevalence of rotavirus in calves with diarrhea in the Kars District of Turkey. The location for the study was chosen because Kars is located in the middle of an animal transit route between North-East Anatolia and Caucasus functioning as a bridge between Asia and Europe. Yildirim et al. [32] determined rotavirus seropositivity rates in cattle as 29.3% in the same region where this study was conducted. They examined total 498 cattle serum samples collected from northeast Turkey by virus neutralisation test and found 146 out of 498 cattle blood samples positive.

Fecal contamination plays an important role in transmission of rotavirus infection. Rotavirus spread too much with feces. Both healthy animals and calves with diarrhea spread too much spread rotavirus antigen [26]. Many methods are used to determined the presence of rotavirus antigen. ELISA, Polyacrylamid Gel Electrophoresis (PAGE), Latex Agglutination (LA), Electron Microscopy (EM), Immunofluorescence (IF) and Immunoperoxidase (IP) are most widely used methods [12,28,29]. ELISA is a simple, sensitive, specific and rapid test; it used widely calves with diarrhea in feces for the determination of rotavirus. ELISA had the advantage of being inexpensive for examination of many samples and has the probability of being much more sensitive. Recently, RT-PCR, using the VP4 or VP7 gene primers, is much widely used for detection of animal rotaviruses [1,3,18,24]. Also, semi-nested or multiplex RT-PCR are being developed. Besides the sequencing of the outher capsid genes has also helped in differentiating various rotavirus isolates [28]. Using antigen ELISA and RT-PCR depending on the amplification of the VP6 gene of rotavirus, feces samples of calves with diarrhea collected from farm in Turkish Republic of Northern Cyprus were checked by Alkan et al. [3]. In the study, the aetiological agent was tested by RT-PCR with generic and type-spesific to the genome segments encoding VP4 and VP7 of rotavirus. It was determited that the rotavirus circulating within the farm belongs to G6 and P [11] genotype in the study. In this study, RT-PCR technique was used to determine the presence of rotavirus nucleic acid by using specific generic primers for VP6 genetic regions in feces samples. The 10 samples that were rotavirus antigen positive by ELISA were also positive on RT-PCR technique.

In this study, of the 112 feces samples tested by ELISA 10 samples were detected positive (8.92%). This percentage is lower than the percentages found in studies conducted in past years [8,14]. This situation can explain that the ages of calves higher than these studies. These studies showed mostly between the ages of 0-15 days. Although, feces samples of calves of 0-6 months old were tested by ELISA in this study, the presence of rotavirus antigen were determineted between the ages 0-15 days in calves. Similarly, Robaiee and Farwachi [4] were detected rotavirus antigen in neonatal calves, aged between 8-15 days by antigen ELISA. They examined a total of 220 feces samples collected from both diarrheic (n=110) and non- diarrheic (n=110) neonatal calves, aged between 1– 30 days from different part of Mosul city, Iraq. In the study, rotavirus infection was found in n=17 (15.5%) of 110 diarrheic calves and only 5 feces samples (4.5%) from 110 non-diarrheic animals.

The virological data that were collected in this study indicate the presence of rotavirus infection in calves with diarrhea in the Kars District of Turkey. An evaluation of the data leads us to the conclusion that a vaccination program needs to be implemented to bring rotavirus infections under control. Furthermore, genomic identification of the rotavirus isolates obtained from this study will play an important role in future studies on protection and control strategies to combat and prevent the spread of infection.