Abstract: This paper aims to summarize the global carbon dioxide emissions of ICT and electricity consumption of ICT fields in recent years. In this paper, some useful solutions to these problems are also discussed. The green networking idea is explained and recent greening solutions are also mentioned.

Information Communication Technology (ICT) has become an integral lifestyle commodity for many people around the world. ICTs have played a central role in bringing people of the globe together. People and the companies has become dependent on the ICT for several purposes such as e-commerce, online banking, home shopping and instant access to music, books and videos which may be thousands of kilometers away from their source.  ICT accounts for approximately 2% of global CO2 emissions. It appears that the time has come to start actively managing the energy usage growth rates down. Therefore the CO2 emissions and the energy consumption of the ICT should be explored and the more energy efficient solutions should be created. 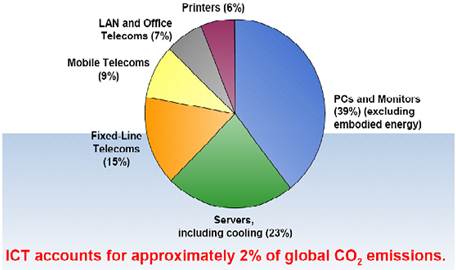 In Figure 2 [2], the use phase electricity consumption for a number of ICT services is given. The collective electricity consumption of communication networks, data centers and personal computers is growing at a rate of 6.6% per year. Together these ICT products and services consumed about 930 TWh in 2012. If this energy was generated as nuclear power, it would require over 100 nuclear reactors (assuming one nuclear reactor produces 1 GW of electricity). 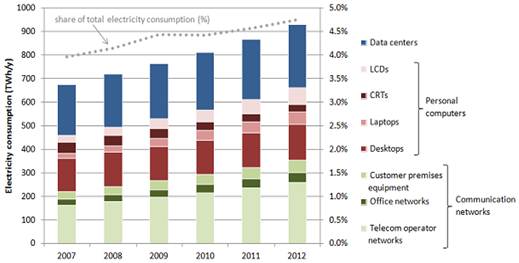 For understanding the energy consumption of the ICT more clearly, there is an another striking example from China. In China, production consumes 2.4 GJ energy in a year, one year world PC usage consumes 0.8 GJ energy [3].

As an another implication, It is estimated that the electric power consumption of 1.5 billion computers in the world is about 10% of global consumption [4].

According to the Alcatel – Lucent in [5], The network component of ICT represents approximately 250-300 million tons of carbon emissions. This is equivalent to 50 million automobiles or 20% of the cars in the US.

If Internet was a country, it would rank fifth in the world for the amount of energy consumption and carbon dioxide emission. Another study by Greenpeace states that the Internet consumes more power than Russia. Greenpeace estimates that when functioning at full capacity, Google’s eight server farms could use up to 476 megawatts of electricity, enough energy to power all of San Diego [6]. 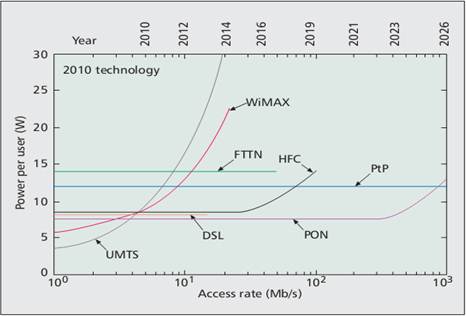 According to Figure 3 [7], Wireless-based (WiMAX, 3G/UMTS) access networks are the most power demanding technologies and the power consumption per user increases rapidly. For example, in 2010 while the power per user for WiMAX was about 8 W, it will be tripled to 24 W by 2014.

A fully loaded core router consumes approximately 10 nJ for each bit when it processes IP packets. In a typical core router, most power is consumed for the Power Supply and Cooling and Forwarding Engine subsytems. These two subsystems account for 2/3 of the total power consumption.  The Switching Fabric, Control Plane, Input/Output Cards and Buffers are responsible for 1/3 of the total power consumption [7].

Today, the green communications concept focuses mainly on developing energy – efficient communication techniques for networks. In general, there are three main approaches are suggested for power management in communication networks.

To achieve the goal of energy efficiency, the research must focus on decreasing the amount of energy consumed by the network nodes. Unfortunately, most of the energy savings at the physical layer has already been achieved. Therefore the key to the energy conservation in ICT industry lies within the higher levels of the protocol stack. Various research efforts are being conducted at the data link, network, transport, OS/middleware and application protocol layers to address energy efficiency issues for communication networks.

In the media Access control layer, avoiding or eliminating collisions as much as possible within the MAC sublayer can result in significant energy savings as collisions result in retransmissions. The Energy Conserving Medium Access Control (EC–MAC) protocol [11] avoids collisions by broadcasting a schedule that contains data transmission starting times for each mobile node. The EC–MAC studies use fixed length frames. Fixed length frames are more desirable from the energy efficiency perspective; however, variable length frames are better for meeting the demands of the bursty traffic. The energy efficiency of EC–MAC is compared with IEEE 802.11 and other MAC protocols in [11]. While the EC–MAC protocol is designed primarily for infrastructure networks, the Power Aware Multi Access (PAMAS) [12] protocol is designed for ad hoc networks. PAMAS protocol turns off the transceiver whenever the node determines that it will not be receiving data for a certain period of time. The usage of separate control channel allows for mobiles to determine when and for how long to power off. The results from simulation and analysis show that depending on the topology of the network 10% to 70% power savings can be achieved for fully connected topologies. In the media Access control layer, handling channel Access with minimum energy consumption is still an open problem.

Routing and congestion control is some of the major responsibilities of the network layer of the protocol stack. Energy efficient routing cannot easily be applied to infrastructure networks because all traffic is routed through the base station. In [13], routing of unicast traffic is addressed with respect to battery power consumption. The authors’ research focuses on designing a protocol to reduce energy consumption and to increase the lifetime of each mobile. The premise behind this approach is that although packets may be routed through longer paths, the path may contain mobiles that have greater amounts of energy reserves. Also, energy can be conserved by routing traffic through lightly loaded nodes because the energy expended in contention and retransmission is minimized.

The above approach of routing in wireless ad hoc networks requires, at the very least, that every node should have knowledge of the locations of every other node and the links between them. This creates significant communication overhead and an increase in the network delay. Research presented in [14] addresses this issue by proposing localized routing algorithms which depend only on information about the source location, the location of neighbors, and location of the destination. This information is collected through GPS receivers which are included within each mobile. As a result, excessive network communication is not required but extra energy is consumed by the GPS units.

The broadcast technique used in traditional networks is a simple flooding algorithm. For broadcast traffic, within a single transmission, a node is able to transmit a packet to all immediate neighbors. However, receiving a packet only once is sufficient for a node. [15] addresses the routing of broadcast traffic in terms of power consumption. The key idea in conserving energy is to allow each node’s radio to turn off after receiving a packet if its neighbors have already received a copy of the packet.

The construction of energy efficient broadcast and multicast trees for the wireless environment is studied in [16]. The authors state that nodes may experience greater energy conservation, if routing decisions are combined with decisions concerning transmission power levels. An algorithm is presented for determining the minimum-energy source based tree for each broadcast / multicast session request. A similar idea concerning the incorporation of transmission power levels into routing algorithms is also presented for unicast traffic in [17]. In the network layer open issues include path determination, logical addressing, and choosing the optimal path when the physical layer is operating at the minimum energy limit.

There are also various studies in the transport layer. In [18] the energy efficiency of TCP is discussed. Results of this study show that error correction significantly affects the energy performance of TCP and that congestion control algorithms of TCP actually allow for greater energy savings by backing off and waiting during error bursts. Simulation results presented in [19] point out that TCP probing achieves higher throughput values while spending less energy. An experimental transport protocol, called Wave and Wait protocol (WWP) [20], is developed specifically for a wireless environment with limited power.

Conserving energy in the application layer has also been considered. The summary of software strategies for energy efficiency is presented in [6]. In [21,22] APIs such as Advanced Configuration and power interface and power management analysis tools such as power monitor is developed to assist software developers in creating programs that are power conserving. PowerScope [23] is a power management tool developed at the Carnegie Mellon University. PowerScope maps energy consumption to program structure, producing a profile of energy usage by process and procedure. The authors report a 46 % reduction in energy consumption of an adaptive video playing application by taking advantages of the information provided by PowerScope. [24] considers the impact of energy efficiency on database systems. Energy efficiency in database design by minimizing power consumed per transaction through embedded indexing has been addressed in this study. [25] discusses energy efficient query optimization for a database system. In [26], research on processing encoded video for transmission under low battery power conditions is presented. The basic idea of this work is to decrease the number of bits transmitted over the wireless link in response to low-power situations. Decreasing the number of transmitted bits reduces the energy consumption due to reduced transmitter usage.

Some international approaches assess the efficiency and carbon footprint of telecommunication systems, and standarts for industry and communication equipment [27]. Life cycle assessment (LCA), for example, determines the product’ s total CO2 emissions index from its origin through its manufacturing, distribution, use and disposal.

The Energy Consumption Rating assessment tool determines the ratio of maximum power consumption in watts to effective system throughput in bits per second.

These standardization efforts will surely force manufacturers to build communication and computing devices with minimum energy dissipation and CO2 emissions.

According to these examples and studies, energy efficient solutions and greening activities become significant. Some of the greening studies of the big corporate ICT companies and their solutions were investigated in this paper.

From [6], Yahoo reportedly only uses 18.3 percent coal-based power with the majority of its data centers, efficiently using solar and hydro energy.

The most extensive greening solutions is carried out by Google [8]. The company is being greened. For over ten years, Google has been building some of the most efficient data centers in the world. In fact, the data centers which are using by Google consume 50% less energy than the typical data center. This has saved Google over a billion dollars to date, and cuts its impact on the environment.

An another remarkable greening solutions are investigated and realised by Apple in [9]. Apple reports environmental impact comprehensively. For 2012, it is estimated that Apple was responsible for 30.9 million metric tons of greenhouse gas emissions. Manufacturing - including extraction of raw materials and product assembly - accounts for 61% of Apple’s total greenhouse gas emissions. All told, Apple will be producing enough onsite renewable energy - 167 million kWh - to power the equivalent of 17,600 homes for one year.