Abstract: Zidovudine is a drugs used in the management of Human Immunodeficiency Virus (HIV) and Acquired Immunodeficiency Syndrome (AIDS) infection in sub-Saharan Africa in combination with other drugs. The objective of this research was to investigate the potential harmful effects of this drug on the histology of the cerebellum of Wistar rats. Twenty male Wistar rats were used for this study. The rats were divided into 2 groups of 10 rats each. Group A served as the control and was administered with 1 ml of distill water, while group B was administered with 8.57mg/kg of zidovudine daily for 30 days, after which the rats where sacrificed and each cerebellum was harvested, processed and stained using haematoxylin and Eosin (H/E), silver impregnation method. Paraffin impregnated Glial Fibrilar Acidic Protein (GFAP), Neuron Specific Enolase (NSE) and Neurofilament (NF) immunochemistry methods. Stained slides were viewed using light microscope. Results showed that, the cerebellum of Groups B animals were affected with moderate to severe shrinking and distortion of the Purkinje cells and granular cells, when compared with the control. Group B animals, also showed more expression of GFAP, NSE and NF staining in their cerebellum than the control. This suggests that zidovudine is harmful to the cerebellum and should be taken with caution.

Zidovudine (ZDV) is a nucleoside analog reverse- transcriptase inhibitor (NRTI), a type of antiretroviral drug used for the treatment of HIV/AIDS infection. It is a therapeutic analog of thymidine. ZDV was the first U.S. government approved treatment for HIV therapy, prescribed under the names RETROVIR and RETROVIS. ZDV was the first breakthrough in AIDS therapy, significantly reducing the replication of the virus in patients and leading to clinical and immunologic improvements [1-3]. It can also be used to prevent HIV transmission, such as from mother to child. When used as monotherapy in HIV-infected patients, ZDV safely slows HIV replication in patients, but generally does not stop it entirely [4]. The effectiveness of ZDV in the treatment of HIV infection is due to its selective affinity for HIV reverse transcriptase as opposed to human DNA polymerases [5,6].

Zidovudine is a white to beige, odourless, crystalline solid with a molecular weight of 267.24 and a solubility of 20.1mg/mL in water at 25⁰C. The molecular formula is C10H13N5O4. Zidovudine has been found effective, at high doses, in slowing the progression of AIDS dementia, and can penetrate the blood – brain barrier [7]. There are anecdotal reports of psychiatric symptoms, including mania and depression, in patients treated with zidovudine. Several case reports document manic episodes in association with zidovudine treatment, even in patients with no previous psychiatric history [8]. The mechanism involved in zidovudine – associated psychiatric effects are unknown. ZDV has been associated with seizures, particularly in cases of overdose, which have on rare occasions been fatal [9]. ZDV is well absorbed and extensively distributed, with peak serum concentration occurring within 0.5 to 15hours[10].

Most of the studies of the toxicity of zidovudine in animal models were performed in mice, and as in humans, the most frequently cited effect, after either short-term or long-term dosing involved the haematopoietic system [11–17]. Olivero et al 1997 reported that transplacental exposure of mice to zidovudine at 25 mg/day by gavage during the last third of gestation resulted in shorter chromosomal telomeres in the liver and brain of most newborn mice [18]. Despite these adverse effects, there is dearth of literature on the histological effect of this drug on the cerebellum. The objective of this work therefore was to investigate the histopathological changes in the cerebellum of Wistar rats administered with Zidovudine.

Twenty male Wistar rats were used for this study. The rats were divided into 2 groups of 10 rats each. Group A served as the control and group B was the treatment group and was administered with 8.57mg/kg of zidovudine. The animals were handled according to the guidelines for the treatment of laboratory animals. Ethical approval was from the Graduate School Committee University of Uyo. The rats were treated for 30 days and allowed water and feed ad libitum. On the 31st day, the rats were sacrificed using chloroform inhalation method and their cerebellum harvested, processed and stained using the Haematoxylin and Eosin, Silver impregnation method, paraffin impregnated Glial Fibrilar Acidic Protein (GFAP), Neuron specific Enolase (NSE) and Neurofilament (NF) immunochemistry methods. Stained slides were viewed using light microscope. 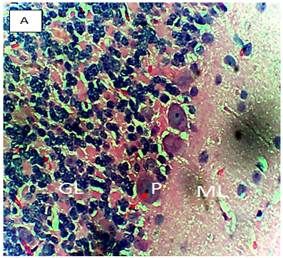 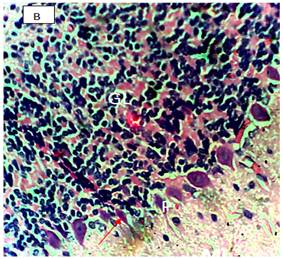 Plate I. Photomicrograph of the histology of the cerebellum of groupA (control) and B (treated with 8.57mg/kg of Zidovudine) showing three cerebellar cortical areas; molecular (ML) layer, granular (GL) layer, with an elongated and shrunken Purkinje (P) cells. The purkinje cells, granular cells, basket and starlet cells all appear smaller when compared to the control slide (A). H & E, ×400. 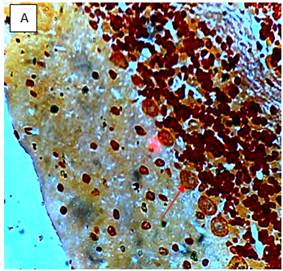 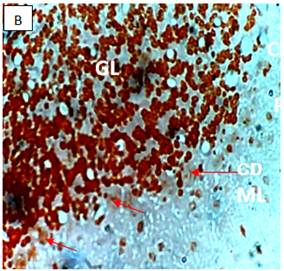 Plate II. Photomicrograph of the histology of the cerebellum of group B treated with 8.57mg/kg of Zidovudine showed three cerebellar cortical areas; molecular (ML) layer, granular (GL) layer, with a disrupted, pale and shrunken Purkinje (P) cells (arrow). The Purkinje cells and granular cells appear smaller with cellular degeneration (CD) when compared to the control A, silver stain ×400. 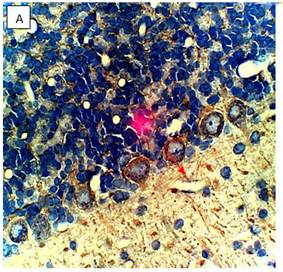 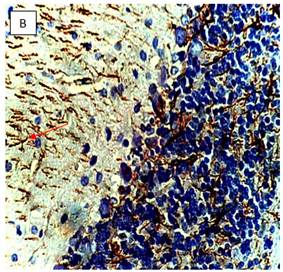 Zidovudine has been found to be effective, in slowing the progression of AIDS, and can penetrate the blood brain barrier [7]. But there are anecdotal reports of psychiatric symptoms, including mania and depression, in patients treated with zidovudine, even in patients with no previous psychiatric history [8]. The mechanism involved in zidovudine associated psychiatric effects is unknown. Zidovudine also has been associated with seizures, particularly in cases of overdose, which have on rare occasions been fatal [9].

In this study there were distortions on the purkinje cells and granular cells of the cerebellum in the groups treated with Zidovudine, with shrunken cells and degenerative changes in the Purkinje cells, there was atrophy of the granular cells in both the H and E and silver stained sections. It was earlier reported by Bialkowska et al. that oxidative damage to nuclear DNA in fetal liver and kidney tissues of pregnant swiss mice and patas monkeys could be caused by zidovudine [19]. Increased level of 8-oxo-2’- deoxyguanosine, a reactive oxygen species, may contribute to the mechanism of transplacental carcinogenesis [19]. Poirier et al. observed incorporation of ZDV into DNA of fetal liver; lung, heart, skeletal muscle, brain, testis and placenta were observed when ZDV was infused to pregnant rhesus monkeys [20]. Researchers frequently use rabbits in toxicity and safety testing of medical devices, vaccines, and drugs. Both mice and rats are heavily used in vaccine and drug research and testing [21]. Wistar rats were used in our study due to availability, low cost of acquisition and ease of ethical approval.

There are numerous reports on mitochondrial alteration in fetus and infants exposed in-utero to ZDV [19-21,23,24]. This might have been the mechanism of cellular damage in our study. Mechanism of injury could also result from reactive oxygen species from cellular metabolism. Prenatal exposure of animals to zidovudine during pregnancy revealed multiple dysfunctions in the liver kidney ovary and the cerebral cortex [25]. One of the earliest reports observed visual impairment, respiratory and cardiac rhythm disorders, epilepsy, and deterioration of cognitive and psychomotor abilities in children exposed prenatally to ZDV [26]. In another study, mitochondrial DNA was observed to be damaged in liver tissues [27]. In yet another study of prenatal exposure of 40 mg/day of ZDV in inpatas monkeys showed damage of cerebral mitochondria [28]. Neurobehavioural changes reported by different authors, revealed the cerebral effect of ZDV [29-31]. In- vitro study of brain cells from fetal mouse exposed to ZDV showed slightly more cytotoxic effect as compared to other tissues of the body [32]. Our findings corroborated with the findings of these studies.

The cerebellum is known as the motor control centre, and it is increasingly recognized as contributing to general cognitive processing [33-38] and emotional control [36-38]. The effect of zidovudine on the cerebellum can lead to motor dysfunction and poor coordination and emotional imbalance. This might further contribute to the poor quality of life of patients with HIV in Nigeria. We recommend that there is urgent need to discover cytoprotective agents that will protect the body against the adverse effect of Zidovudine. The drug should also be prescribed with caution to children.