Abstract: This study aimed to obtain efficient bacteria capable of desulfurizing dibenzothiophene (DBT). For this purpose forty oil contaminated soil samples were collected from different sites in Iraq. It was found that three isolates (M9, M19 and S25) had the ability to desulfurize DBT (cleave C-S bond) and converted it to 2-hydroxybiphenel (2-HBP) or other phenolic end products. This suggests the involvement of the 4S pathway in the desulfurizing of DBT via a specific cleavage of only the C-S bond by these isolates. These isolates were identified as Pseudomonas aeruginosa. The result also showed that P. aeruginosa S25 was the most efficient one for removing sulfur from DBT. The GC/MS analysis for DBT after growth of P. aeruginosa S25, indicated that 12.89 % of DBT was consumed (consumption of sulfur), and the product (2-HBP) was further converted to 2-MBP (addition of a methyl group) and this could be a novel pathway for consuming DBT.

Crude oil (Petroleum hydrocarbon) continues to be used as the principle source of energy and hence a large global environmental pollutant, due to the possibility of air, water and soil contamination. Petroleum is a complex mixture of non-aqueous and hydrophobic components. Many of these components are toxic, mutagenic and carcinogenic (Mandal et al., 2012). The increasing sulfur content of crude oil also results in an increase in sulfur content in automotive gasoline, diesel fuel, and jet fuel. To meet the needs for producing clean fuels, decreasing the sulfur content of crude oil becomes an urgent task. Studying new desulfurization technology and raising the efficiency of desulfurization processes are the keys to bringing more profits to the oil refining companies (Liu et al., 2007). At present, numerous desulfurization methods have been developed. Among them hydrodesulfurization (HDS) has been widely applied to the field of petroleum fuel production around the world for a long time. HDS has short comings such as lower desulfurization efficiency, strict reaction conditions and so on, which leads to higher manufacturing costs and higher price of the resulting fuel, therefore, the search for new desulfurization technologies which offer higher efficiency and lower manufacturing costs has become a hot research topic in this field (Gao et al., 2009; Ma et al., 2013). However, HDS has several disadvantages, in that it is energy intensive, costly to install and to operate, and does not work well on refractory organosulfur compounds. Research has therefore focused on improving HDS catalysts and processes and also on the development of alternative technologies. Compared with HDS process, the biodesulfurization (BDS) process using microorganisms and/or enzymes could be carried out more safely, under mild conditions (Chen et al., 2009). Removal of inorganic sulfur from fossil fuels is possible by physical, chemical or biological means. Physical and chemical methods are expensive mean (Monticello et al., 2000), while biodesulfurization (BDS) is a process which is requires lower capital cost as it operates at mild conditions of atmospheric temperature and pressure and does not require molecular hydrogen (Alves and Paixão, 2011). It also produces far less carbon dioxide than HDS (Kilbane, 2006). The compound dibenzothiophene (DBT) has received most attention in biodesulfurization studies because it is an accepted model compound representative of thiophenic structures found in coal and petroleum. For this reason, biodesulfurization of crude oil and its fractions has been studied extensively (Kilbane 2006; Mohebali and Ball, 2008; Xu et al., 2009). Fuel desulfurization represented an opportunity for a cost effective solution to acid rain and other health hazard caused by sulfurous emission (Rhee et al., 1998; Mohebali et al., 2007). According to those mentioned above, the aim of the present work was to obtain potential biocatalists (bacterial isolates) for desulfuring of dibenzothiophene (DBT).

Oil - contaminated soil samples were collected from forty different sites, with a history of oil pollution, in Iraq. The microbial selection procedures were performed in basal salt media (BSM) (pH 7.2) constituted of K2HPO4 (4 g); Na2HPO4 (4 g); NH4Cl (2 g); MgCl2.6H2O (0.2 g); CaCl2.2H2O (0.001 g) and FeCl3.6H2O (0.001 g) per liter of distilled water. One hundred milliliter of BSM were dispensed in the 250 ml Erlenmeyer flasks supplemented with 0.1 mM of DBT as a sole source of sulfur and glycerol (10 mM) as a carbon source, autoclaved at 121 °C for 15 min. One percent (w/v) of soil samples was added to the flasks and incubated at 30 °C with shaking (150 rpm) for four days. Samples (0.1 ml) of appropriate dilutions were spread onto plates of LB agar plates, incubated at 30 °C for 24 hrs. A single colony was picked with a sterile loop to prepare a pure subculture in a fresh LB agar plates by streaking. The purity of the isolated colonies was checked by microscopic examination. Pure isolates were growing in BSM medium containing DBT and glycerol (as mentioned above) to ensure their ability to desulfurize DBT.

2.2. Preparation of the Bacterial Inoculates

The bacterial isolates were grown in flasks containing DBT- glycerol- BSM media at 35 oC with shacking (150 rpm) for 18 hrs. Cells were harvested by centrifugation (10,000 ×g), washed twice, and resuspended in BSM media lacking DBT and glycerol. The resulting suspension was used as the bacterial inoculum. The size of the inoculum used in all experiments was 1% (v/v).

Gibb's assay was used to determine the presence of DBT biodesulfurizing bacteria that exhibit the 4S pathway by the detection of 2-hydroxybiphenyl (2-HBP) which is the end product of the 4S pathway. The cell- free culture supernatant was obtained from 50 ml of bacterial cultures, grown at 35 oC for 4 days, by centrifugation (10,000 ×g, 10 min, at 4 oC ). One ml of each cell-free supernatant was transferred to clean eppendorf and adjusted to pH 8 by adding 60 µl of 1 M NaHCO3 (Konishi et al., 1997) or by adding 3 µl of 4 M of NaOH. Detection of the end products of the desulfurization of thiophene compound, was carried out in microtiter plates by adding 3 µl of Gibb's reagent (2, 6-Dichloroquinone-4-Chloroimide, 1mg/ml in ethanol) to 300 µl of cell- free supernatant (pH 8) (1:100) and the mixture was kept at room temperature for 30 min. Bacterial cultures capable of desulfurizing thiophene compound, accumulated phenolic compounds in cultural supernatant and gave blue color in the presence of Gibb's reagent (Rambosek, 1994).

Morphological, physiological and biochemical tests were performed to identify the isolates as recommended by Holt et al. (1994). The identification was confirmed by the VITEK 2 system.

2.5. Selection the Efficient Isolate That Capable of Desulfurizing DBT

The efficient bacterial isolate capable of desulfurizing DBT (as S-source only) was chosen depending on Gibb's assay. The bacterial isolates were grown in BSM supplemented with double concentrations of DBT (0.1, 0.2, 0.4, 0.8 mM) at 35 oC for 4 days. Then Gibb’s assay was performed (as mentioned above) and the developing blue color reading at 610 nm using UV/VIS- Spectrophotometer.

2.6. Detection and Verifying the Biodesulfurizing Products by GC/MS Analysis

P. aeruginosa S25 was grown in 500 ml of BSM containing 0.6 mM DBT (as sole S-source) at 35 oC. The culture with O.D580 of 1.421- 1.602 were centrifuged (10,000 rpm, 4 oC for 15 min) to harvest the cell pellets, washed twice with BSM and resuspended in 500 ml DBT-BSM and incubated at 35 oC for 48h. The resulting cell pellets were washed once and then suspended in 50 ml of BSM lacking DBT to prepare bacterial cell suspension. Conical flask (250 ml) containing 70 ml of BSM supplemented with 0.6 mM DBT was inoculated with 5 ml of cell suspension. These flasks in addition to non inoculated flasks, served as control for biotic losses, were incubated under shaking (150 rpm) at 35 oC for 3 days. After incubation the cultures were centrifuged to separate bacterial cell, then one ml of culture supernatant was extracted with 3 ml of ethyl acetate, this solvent was evaporated by lyophilizer and the residue was dissolved in 100 µl ethanol.

To enrich the potential DBT desulfurizing bacterial isolates, BSM supplemented with 1 mM of DBT as a sole source of sulfur with glycerol (10 mM) as a carbon source, inoculated with a one percent (w/v) of soil samples. All the samples showed clear good growth after four days of incubation at 30 oC. After that, these cultures were plated on LB to get on pure isolates. Sixty three bacterial isolates were obtained and these isolates were repeatedly tested in BSM supplemented with DBT, in order to ensure their utilizing ability (unpublished data).

All the sixty three isolates were subjected to Gibb's assay after four days of incubation. The results showed that three isolates (M9, M19 and S25) have the ability to desulfurize DBT and converted it to 2-HBP or other phenolic end products and gave blue color in the presence of Gibb's reagent. These isolates were repeatedly tested in BSM supplemented with DBT, in order to ensure their desulfurization ability (figure 1). 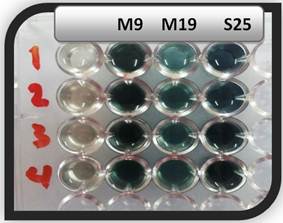 The results refereed that these isolates have the metabolic capability of C-S bond cleavage and lacks the metabolic capability of attacking the carbon skeleton of DBT via the C-C bond cleavage. This preliminary result suggests the involvement of the 4S pathway in the utilization of DBT via a specific cleavage of only the C-S bond by bacterial cultures exhibiting positive results with Gibb's reagent (Gupta et al., 2005; Mohebali and Ball, 2008(.

3.4. Selection the Efficient Isolate That Capable of Desulfurizing DBT

To select one isolate from the three P. aeruginosa isolates (M9, M19 and S25) based on the efficiency of removing sulfur atom from DBT, Gibb’s assay was performed. The concentration of the end product (2-HBP or other phenolic end products), resulted from 4S pathway in culture grown with DBT was quantified by measuring the intensity of the corresponding blue color formed after addition of Gibb's reagent (Akbar, 2008). The obtained results (table 1) showed increased the concentration (intensity) of the 2-HBP with increase the concentration of DBT, after bacterial growth at 35 oC (optimum temperature, unpublished data) for 4 days.

Table 1. Detection of 2-HBP using Gibb's reagent in culture supernatants of bacteria growing with double concentrations of DBT in BSM medium at 35 oC for 4 days.

P. aeruginosa S25 gave obvious blue color upon addition of Gibb's reagent compared to other isolates. This indicated that P. aeruginosa S25 isolate is the most efficient one for utilizing sulfur in DBT, that was clear by a higher concentration (intensity) of the phenolic compounds accumulation.

3.5. Detection and Verifying the Biodesulfurizing End Products by GC/MS Analysis

The GC/MS analysis for the control (DBT-BSM) showed only one peak (figure 2), which represented DBT. Analysis of bacterial culture on DBT-BSM indicated that, as much as 12.89 % of DBT consumed (which represent consumption of sulfur) by the P. aeruginosa-S25 (which gave 32 peaks) (figure 3), depending on the area of the peaks (there is a direct proportion between the area of the peak and the concentration).

Results (figure 6) showed also that there was further converted of 2-HBP to 1, 2-Naphthalenediol, 2-ethyl-1, 2, 3, 4-tetrahydro-, cis and to 4-Methoxybenzhydrol at retention time (9.150, 12.367) respectively. This is like the conversion of 2HBP to 4-MBP by methylation at the hydroxyl group (Rhee et al., 1998). Therefore, it could be a novel pathway of DBT utilization by P. aeruginosa-S25, similar to the 4S pathway except that 2-HBP was further converted to 2-MBP (by addition methyl group).

In biodesulfurization, DBT is converted to 2-HBP, which will increase the possibility of environmental pollution (Ichinose et al., 1999). In contrast, methylation of the hydroxyl group of 2-HBP by bacteria may partially eliminate the inhibitory effect of the product and the pollution from diesel oil combustion (Monticello et al., 2000). Therefore, it was suggested that the pathway followed by P. aeruginosa-S25 is the sulfur-selective pathway for utilization of DBT as reported earlier by Oldfield et al. (1997). 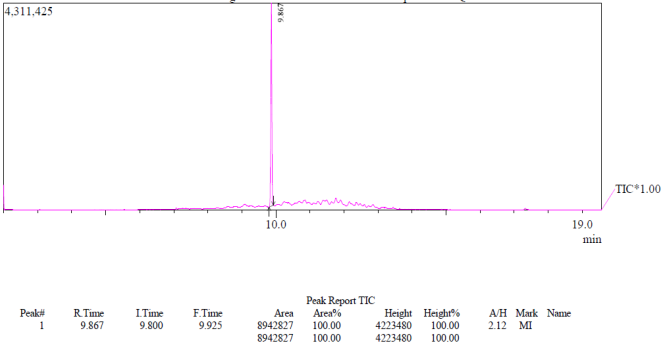 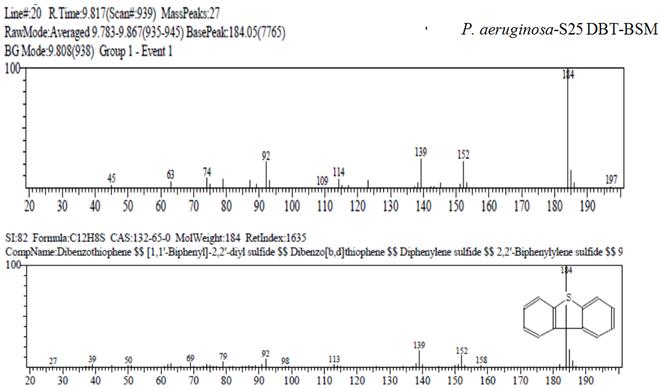 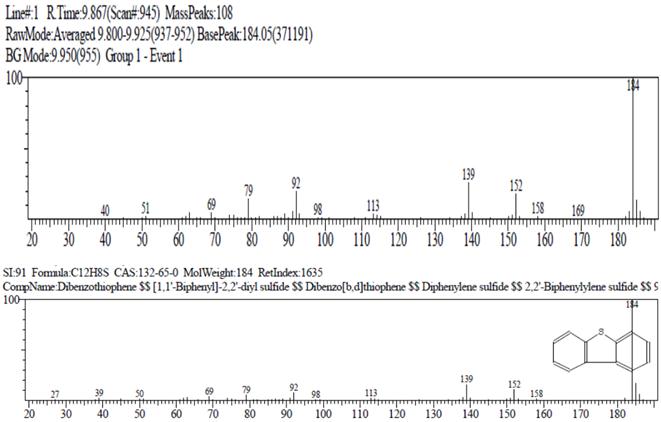 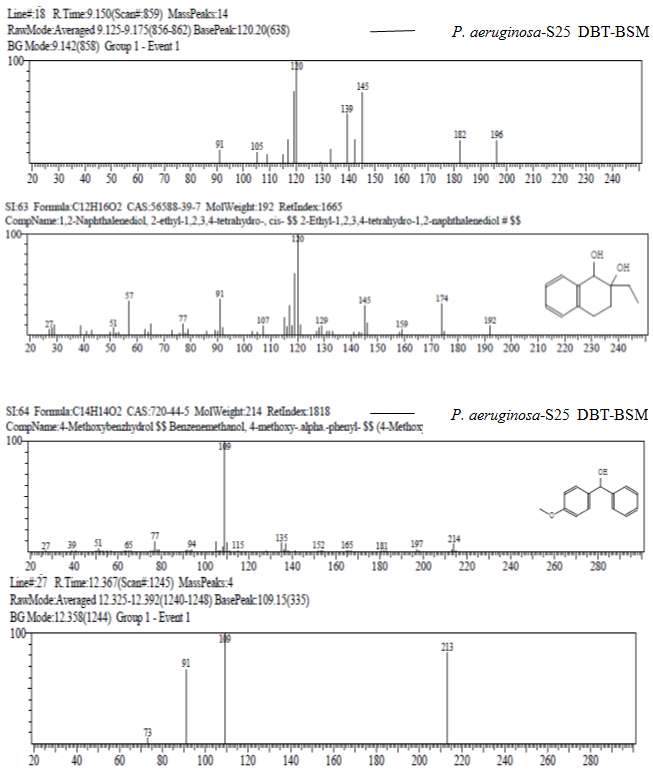 The pathway followed by P. aeruginosa-S25 is the sulfur-selective pathway for utilization of DBT, it could be a novel pathway. The 2-HBP (product) was further converted to 2-MBP (by addition, methyl group), this may eliminate the inhibitory effect of 2-HBP and the pollution from crude oil and diesel oil combustion. This is promising feature that makes P. aeruginosa-S25 potential candidate for developing a biocatalytic desulfurization process for fuels.

The authors would like to acknowledge the support provided by the Deanship of College of Science and College of Biotechnology at Al-Nahrain University.