Abstract: This study was aimed at comparing morphology of the epididymis and vas deferens of One - humped Camel bull (OCB), Uda ram (UR) and Red Sokoto buck (RSB). Fifteen testes and vas deferens were collected, organs grossly examined, measured for weight or length and processed for histology. In OCB, epididymal tail was the largest of the three segments while a reverse of that was obtained in UR and RSB In OCB, the vas deferens was found to be coiled all through while in both UR and RSB, it was found to be highly coiled initially but became straightened as it coursed down to form ampulla. Gross morphometrically, the weight and length of epididymis and vas deferens in the three species differed significantly (P<0.05) from one another. Histomorphologically, in the corpus epididymis, stereocilia were prominently observed in UR followed by RSB and least in OCB. The proximal segment of vas deferens in the three species was found to consist of three histological layers; tunica mucosa from which, many folds extended, tunica muscularis and tunica serosa. Histomorphometrically, all measured parameters in both corpus epididymis and proximal segment of vas deferens in the three species differed significantly from one another. It was concluded that although results show that the studied animals are different ruminant species they exhibits some similarities and interesting morphological differences in epididymis and vas deferens compared to the majority of mammals. The basic morphological characterizations done in this study are important for future studies, such as comparison with other species of ruminants (whether true or pseudo).

The importance of epididymis and vas deferens in sperm production, storage and maturation and sperm transport respectively in domestic animals cannot be overemphasized, since survival of a species largely depends on its ability to reproduce its own kind [1]. This might be the reason why they received more attention especially the epididymis than any other segments of the excurrent duct of the testes. Recent studies on mammalian epididymis include those by [1,2,3,4,5,6,7,8]. Vas deferens on the other hand had received very little attention recently especially in one - humped camel, sheep and goat [9,10]. The epididymis is a highly convoluted tubule which connects the testis to the ductus deferens and is an important segment of the excurrent duct system of the testes that performs a variety of functions [11]. Various studies on mammalian epididymis have shown that it can be divided into distinct regions according to the biochemical, morphological and morphometric characteristics of its segments [12]. Various divisions have been proposed and the most widely used is that dividing the organ into the initial segment, caput, corpus and cauda epididymis [13]. The vas deferens is the tubular structure which conducts spermatozoa from the epididymis to the urethra. After crossing the ureter in the abdominal cavity it dilates into a spindle shaped enlargement, the ampulla [9]. Comparative anatomical and histological studies on epididymis and vas deferens of local domestic ruminants are not available, except few references that are available in the textbook on ruminants in general [14,15]. Therefore, this work highlights comparatively; gross anatomy, gross morphometry, histomorphology and histomorphometry of epididymis and vas deferens in one - humped Camel Bull, Uda ram and Red Sokoto buck.

Fifteen testes and vas deferens of apparently healthy adult one - humped Camel bulls, Uda rams and Red Sokoto bucks (five samples per species) were collected from Sokoto metropolitan abattoir. Sokoto metropolis is located on latitudes 10° N and 14° 50′ N and longitudes 7° E, east of the equator, in the extreme northwest of Nigeria. It covers an area of approximately 2, 823, 237 square kilometres. The last National census reported the state population to be 3, 696, 999 [16]. Following the collection, they were transported to Veterinary Anatomy Laboratory, Usmanu Danfodiyo Sokoto, Nigeria where gross features of the epididymidis and vas deferens were examined and recorded. The epididymis was dissected out from the testes. The weights (g) and lengths (cm) were measured using a weighing balance (Shimadzu AW320, Germany), metre rule and thread respectively. Photographs were taken using digital camera (Samsung ES95, 16.2 megapixels). The sample tissues for histology in epididymis were obtained from the body (corpus) while that of vas deferens was taken from the proximal region (between the vaginal ring and ampulla). They were immediately fixed inside 10% neutral buffered formalin, labelled and kept for two days, followed by preservation in 70% ethyl alcohol. They were dehydrated through ascending grades of ethanol (70%, 95% and absolute ethanol), cleared in xylene and embedded in paraffin wax. Serial sections of 5μm were cut and stained with Haematoxylin and Eosin (H &E) [17]. Micrographs were conducted with a Light microscope connected to a video based, computer – linked system (Tuscen CMOS Camera: IS500, Resolution: 5.0 megapixels) at x400 magnifiation. Histormorphometry was equally done using the same programme software. The following measurements were performed in epididymis: epithelial height (excluding the stereocilia), tubular and luminal diameters and stereocilia height. In the vas deferens, the following measurements were done: thickness of tunica mucosa, thickness of tunica muscularis, thickness of tunica serosa and luminal diameter. The analysis was performed at x100 magnification with a scale bar of 100µm, for both corpus epididymis and proximal vas deferens segments. The epididymal measurements were carried out according to the procedure of [12]. Briefly, the epithelial height was taken as the linear length of the principal cells, from the base of the epithelium (basal lamina) to the apical edge (excluding the stereocilia), the luminal diameter as the longest measurement from one apical edge to the other, and the tubular diameter as the longest distance between basal - basal laminas

Data analysis: Epididymis and vas deferens data obtained were expressed as Mean ± SEM (Standard Error of Mean) and subjected to statistical analysis using Statistical Package for the Social Sciences (SPSS) version 17.0. One - Way Analysis Of Variance (ANOVA) at 95% confidence interval (CI) was used to determine level of significant difference in mean values of the data. Values of (P≤0.05) were considered significant. Where there were differences in means, they were separated by Tukey’s Honestly Significant Difference (HSD).

Means ± SEM of weights and lengths of epididymis and vas deferens of One - humped Camel bull (OCB), Uda ram (UR) and Red Sokoto buck (RSB) are shown in Table 1.

Table 1. Mean ± SEM of weights (g) and lengths (cm) of different parts of Reproductive Tracts of the one - hump camel bull (OCB), the Uda ram (UR) and Red Sokoto buck (RSB).

a, b, c Means within the same row without the same superscript letters are significantly different (p≤0.05) from each other. EL=Epididymal length, EW= Epididymal weight, VDL = Vas deferens length.

The mucosae of the corpus epididymis were found to comprise pseudostratified columnar epithelium with stereocilia, basal cells at the lamina propria, muscularis, vascular connective tissue as well as spermatozoa in the lumen. The stereocilia were found to be more extensive in UR than in the RSB and least prominent in the OCB (Plates 4, 5 and 6).

The various histomorphometric dimensions of the corpus epididymis and the proximal vas deferens in the three studied species are shown in Figs. 1and 2 respectively. 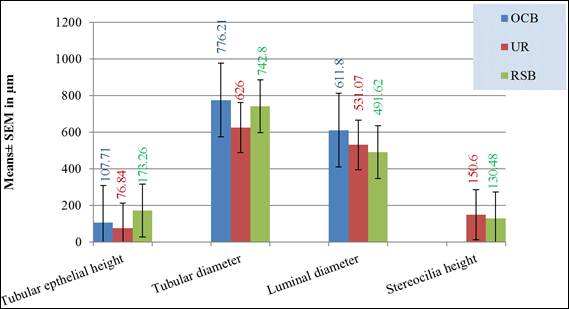 The macroscopic division of the epididymis in the three species into three segments; the head (caput), the body (corpus) and the tail (cauda), follows general pattern as earlier described by [18] in mammals, [19] in one - humped camel and [14] in small ruminants. In this present study, the OCB epididymal tail which was found to be the largest of the three segments agrees with the reports of [19] in OCB. The result however, is contrary to the earlier reports of [20], who reported that the body of the epididymis of one - humped camel accounts for almost 50% of the total epididymal weight. It is also not in agreement with the reports of [21] and [22] in bulls and bucks respectively, who reported that the caput is the largest of the three segments.

The result of this study on the vas deferens of OCB found to be coiled all through, but more before it became enlarged at its terminal portion where it formed ampulla, agrees with the reports of [23] who said, the vas deferens in one - humped camel is coiled initially. He further said its distinct ampullary enlargement is present in the terminal 4.0 - 5.0 cm which enters the urethra ventral to the corpus prostate. The present finding is however, contrary to the reports of [24], who reported that, the vas deferens in one - humped camel is remarkably twisted for much of its initial course, but becomes fairly straight towards the end portion.

The results on histomorphometry could not be adequately compared to the findings of other workers due to paucity of available relevant literature. However, some histomorphometric results obtained in this study are of much higher values than what where earlier observed in Malabari goats [30], Black Bengal bucks [31] and camel [29]. The different results may be due to sampling from different positions, different magnification or different calibrations.

The results show that although the studied animals are different species of ruminant they exhibits some similarities and interesting morphological differences in epididymis and vas deferens compared to the majority of mammals. The basic morphological characterizations done in this study are important for future studies, such as comparison with other species of ruminants (whether true or pseudo).